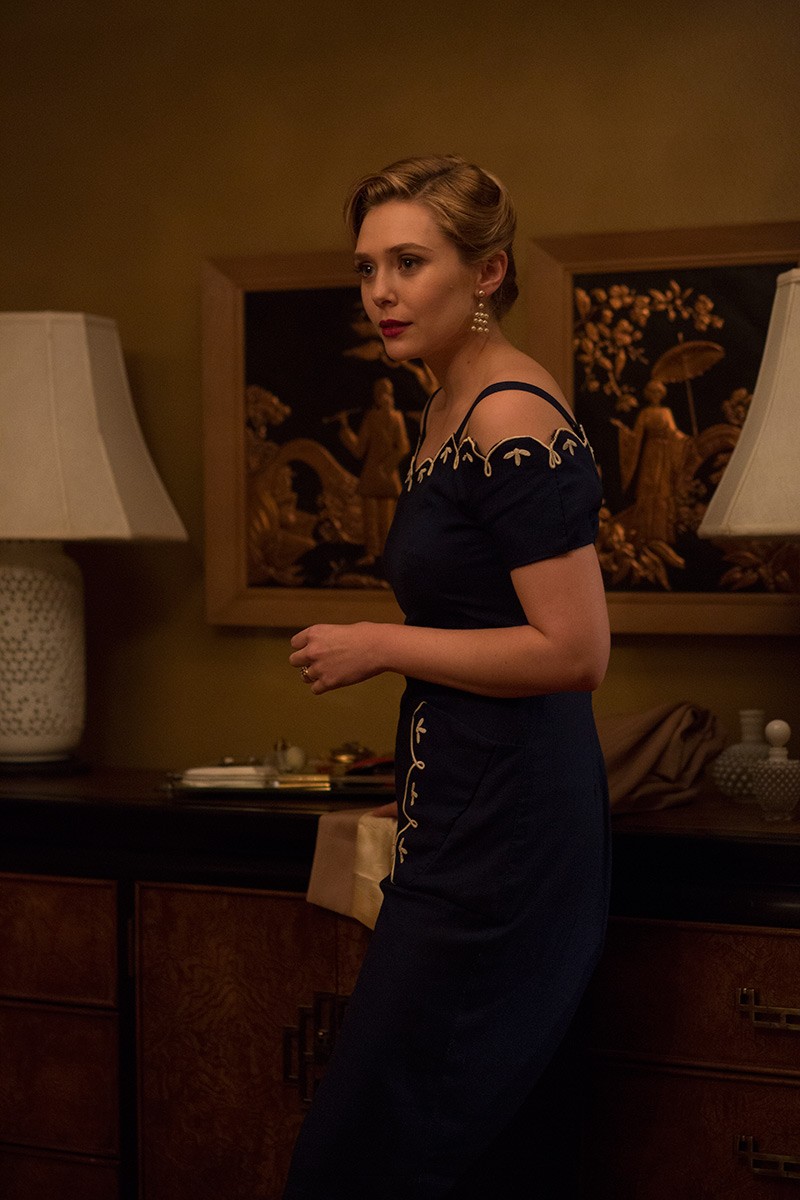 For her role in the critically acclaimed Martha Mercy May Marlene (2011), Elizabeth Olsen was nominated for the Independent Spirit Award for Best Female Lead. The twenty-seven-year-old has appeared in Silent House, Liberal Arts, Kill Your Darlings, Very Good Girls, Oldboy, In Secret, Godzilla and Avengers: Age of Ultron.

Olsen portrays Audrey Williams, Hank Williams’ wife, in the biopic, I Saw the Light, directed by Marc Williams and starring Tom Hiddleston as Hank Williams. The film opens in theaters March 25, 2016. Olsen is the younger sister of actresses and fashion designers Mary-Kate Olsen and Ashley Olsen.

"Hank was kind of this original rock star. Also when I read it, I really felt for Audrey. I really cared a lot about her, and I felt sorry for her. I thought that if people could have empathy for her, even with embracing her faults and her demons, then I’d feel like I had done my job well."

Melissa Parker (Smashing Interviews Magazine): I understand you and Tom (Hiddleston) knew each other before working on I Saw the Light together. Was it working with him or the actual part of Audrey, or a combination of things that drew you to the role?

Elizabeth Olsen: It was the whole combination. Tom and I tried to work with each other once before, and then the project didn’t happen. That project didn’t seem right to me anyway. With this, I didn’t know much about Hank until I read the script. I really found the script to be so impressively modern. I didn’t know his story. I didn’t know how all of that could’ve happened in such a pure time (laughs). You know, you think of 1946, 1953, at the Grand Ole Opry. You think about this wholesome family in a fake land that we’ve created in film and television that we reflect on as part of that time, and then you see the darkness and the demons and them dealing with the same kind of issues that we see people have dealt with forever.

Hank was kind of this original rock star. Also when I read it, I really felt for Audrey. I really cared a lot about her, and I felt sorry for her. I thought that if people could have empathy for her, even with embracing her faults and her demons, then I’d feel like I had done my job well.

Melissa Parker (Smashing Interviews Magazine): Audrey Williams was a complex person. How much research did it take for you to feel like you really had a handle on the character and her personality?

Elizabeth Olsen: I put as much in that was possible, really. It started off with the book that Marc used that inspired his screenplay. There’s a BBC documentary that I found really interesting because there are some voiceovers of an interview with her and were also people talking about her and telling stories they’d experienced. Then it became like trying to find any video or recording of her possible on the Internet. That was really fun for me.

I got to go to the Nashville Music Hall of Fame and Museum. They have Hank and Audrey’s personal belongings basically in their archives just to take care of them on behalf of the family and to keep them in a safe place. They’re not for the public. They’re just archival. I was able to go back with a really kind man at the museum to show me all these personal photos and huge scrapbooks that Audrey created where she had all the printouts and cutouts of different advertisements of Hank and her and Hank.

Anytime Hank made the Top 10 chart, Audrey would circle it or highlight it. She was bookkeeping it in a way. In the photographs, you could see that Audrey had everything monogrammed; dresses, boots, everything had either an “A” or “Audrey” on it (laughs). I also learned that she made the choice that when Hank and his band would play, she’d tell them to wear suits instead of hillbilly outfits. She really thought of everything as a business and branding.

Those kinds of things made me have a stronger idea of what it was that made her manipulative to other people or what made her difficult to deal with because she just didn’t think of herself as a wife. She thought of herself as a businesswoman. She got Hank, Jr. and Lucretia on stage the moment she could. That is how she functioned. She wanted to be in it as well. I tried to get as much research as you can get. Then there’s a point where eventually you do feel just confident of your own instincts and impulses on their behalf and hopefully do them some sort of justice that maybe hasn’t been done before.

Melissa Parker (Smashing Interviews Magazine): What do you think was Audrey’s strongest trait?

Elizabeth Olsen: I think of her as a woman who stood up for herself. I think she spoke up when she didn’t agree with something, and she said it loudly (laughs). That’s hard to do for anyone of any generation. And I think she did it just fine.

Melissa Parker (Smashing Interviews Magazine): Audrey had an abortion back when it wasn’t legal. Did that make you think about what happened to women before Roe v. Wade?

Elizabeth Olsen: Yes. Beyond just the emotional experience of anyone making a decision like that at any time, that’s a really risky thing to do. She ended up getting an infection from it and being hospitalized. That is a really scary, risky thing to do.

To do that without letting your husband, whom you have another child with, know because of how much pain you’re in … how angry she must’ve been and how sad she must’ve been. How much she must’ve wanted to hurt him to make a decision like that without ever letting him know. That’s such incredibly painful and dark and so deeply sad. If you just put yourself in Audrey’s shoes, you can’t help but feel sorry for her.

Melissa Parker (Smashing Interviews Magazine): You’re an accomplished vocalist, and Audrey was not a good singer. Is it easier to try to sing well or to try to sing badly?

Elizabeth Olsen: (laughs) I think it’s easier to try and sing badly. It’s more fun and playful, that’s for sure. You definitely get away with a lot more.

Melissa Parker (Smashing Interviews Magazine): Would you say that the film is really about the love story between Hank and Audrey as much as anything else?

Elizabeth Olsen: Yeah. I think a lot of times what happens in biopics is that you’re trying to figure out why someone’s a genius. Why was he a genius? How did he write those songs? What pain did he suffer? Then you have the facts, the stories we know are true.

Instead of assuming why he’s a genius, which comes across as false anyway because no one ever knows why someone’s a genius, we wanted to tell the story of the relationship that inspired all those beautiful songs and poetry that we’ve all been connected to for so many decades. There had to have been a lot of love, a lot of anger, a lot of fear and sadness and loneliness that came out of his relationships with his father, mother and wife.

Melissa Parker (Smashing Interviews Magazine): I read that you wanted to be an accountant when you were younger (laughs).

Elizabeth Olsen: Oh God, I did! It was because I thought that sounded better to my father. I was a straight “A” student my whole life, and I was always very good at math. My dad would say, “We’re going to get you into banking!” I was like, “Okay.” He was saying that being an actor would not happen, that it’s a very hard career, and I’d have to get lucky with that. Then I went to college for it and just trained as much as possible.

Melissa Parker (Smashing Interviews Magazine): How do you feel about reuniting with your Avengers: Age of Ultron (and the upcoming Captain America: Civil War) co-star, Jeremy Renner, for Wind River?

Elizabeth Olsen: It’s so awesome! He’s a great teammate to have. We’re both very straightforward, direct, open communicators. When you’re working on a small project like we are, that’s really important because things are a little difficult when you have less money and time. He has been an amazing person to really work as a partner on this with, which is different than Marvel. Marvel is kind of like playtime for us. We take our jobs seriously, but in Wind River, we’re side by side, and that feels really good. I’m really happy working with him again.

Melissa Parker (Smashing Interviews Magazine): Marvel seems to have made quite an impact in the film industry. Why do you think that is?

Elizabeth Olsen: For me, growing up, Star Wars was so important to me. Indiana Jones was so important to me. It’s because of the world, and it’s because of the characters. Marvel did a great job of creating both characters and a world. There’s a sense of humor, and they’re well-made films. They’re interesting and exciting. They keep secrets from their fans, so there’s always a hook and something to look forward to next. They’re getting so many amazing actors (laughs). It’s a crazy amount of good actors in the Marvel universe.

Elizabeth Olsen: She’s now a part of the team. It’s been about a year, and she has now been a part of the Avengers family. That makes her start to feel a little bit more confident in her abilities. I think she still battling, though, with the idea of whether or not it’s something to use and trying to understand the reason as to why she is the way she is, and if it’s something she should take advantage of or not.

Melissa Parker (Smashing Interviews Magazine): It seems that your career is on the fast track. Are you just hanging on for the ride keeping very busy, or starting to pick and choose the roles that you want?

Elizabeth Olsen: I haven’t worked in nine months (laughs). I have been reading scripts and waiting for this movie with Jeremy to start and have been training for that. I play a federal officer, so I’m been doing a lot of weapons training. I have missed working so much (laughs). I don’t want to stop all year. I just like to keep on going, and I don’t want to stop next year. I really had a great time having a break, but I’ve missed working. It gives me such satisfaction.

Melissa Parker (Smashing Interviews Magazine): Are you happy that you chose acting over accounting?

Elizabeth Olsen: I’m very happy (laughs). I think my dad is, too, honestly.