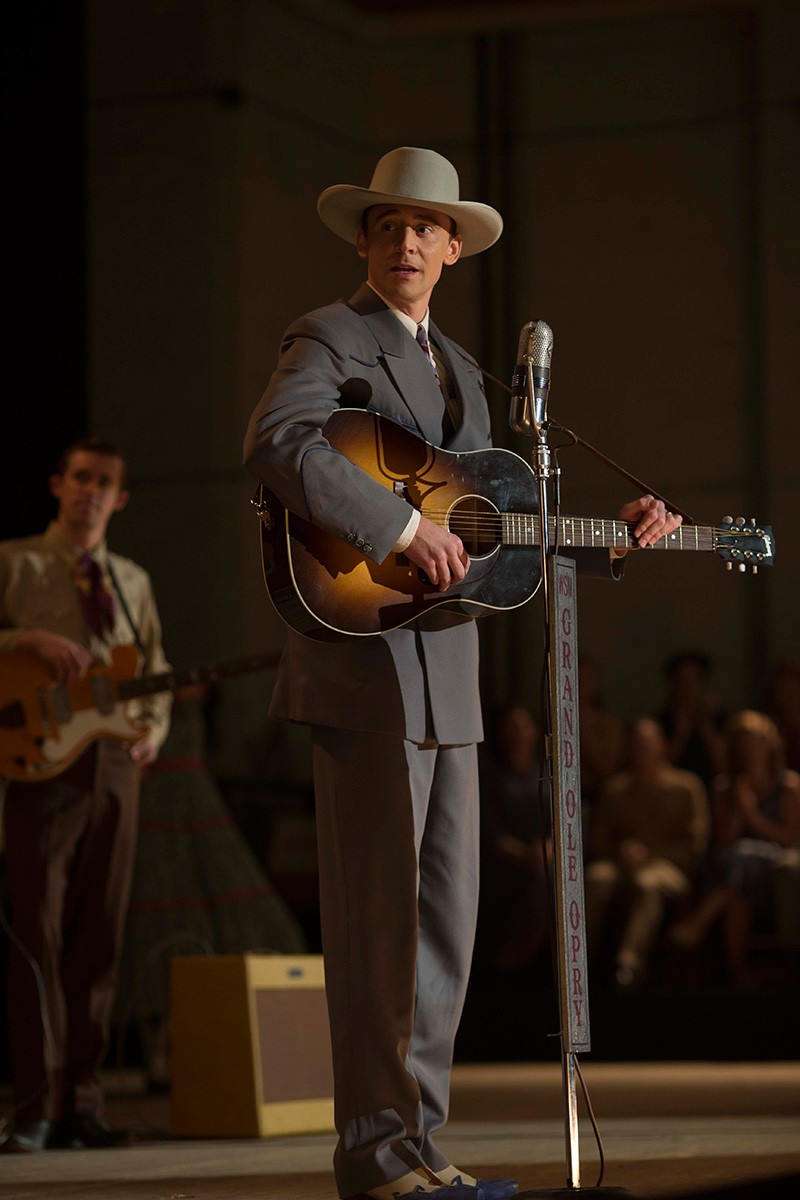 Tom Hiddleston is perhaps best known as the villain Loki in Kenneth Branagh’s Thor, a role that he reprised in the 2012 blockbuster hit Marvel movie, The Avengers. He returned to his role as Loki in Thor: The Dark World, alongside Chris Hemsworth and Natalie Portman.

Other film appearances include Archipelago, Midnight in Paris, War Horse, The Deep Blue Sea and Crimson Peak. Scheduled to be released in the United States in limited release on May 13, 2016, is the thriller High-Rise, which stars Hiddleston, Jeremy Irons, and Elisabeth Moss. The actor stars opposite Hugh Laurie in the television adaptation of John le Carre’s novel, The Night Manager. The six-part miniseries began broadcasting on BBC One on February 21, 2016, and it will begin airing on AMC April 19.

"I haven’t spoken to Hank, Jr. I believe the memory of that time for him is so delicate. He knew the film was being made and didn’t have a problem with it, but he didn’t necessarily want to talk about it, which I understood."

Written and directed by Marc Abraham, I Saw the Light is the story of the legendary country western singer Hank Williams who, in his brief life, created one of the greatest bodies of work in American music. The film opens in theaters March 25, 2016, and stars Hiddleston (as Hank), Elizabeth Olsen (as Audrey Williams), Bradley Whitford, David Krumholtz and Cherry Jones.

Melissa Parker (Smashing Interviews Magazine): Tom, recently on Twitter, you said that you “threw your whole soul at” I Saw the Light. Do you do that for every film you’re in?

Tom Hiddleston: Yes, I do, truthfully. I don’t really know any other way. I suppose it’s the way that I work. It’s such a unique privilege to get to make films and to be an actor, so for a long time, the way that I work is, if I don’t throw my whole soul at it, I’d never forgive myself.

But particularly with this, I felt a very great responsibility to Hank Williams himself, his family, his legacy and all the keepers of the flame because he has inspired so many, and he’s so much a part of people’s lives. I wanted to do right by him and that meant committing myself entirely to his story as opposed to mine.

Melissa Parker (Smashing Interviews Magazine): What was the most difficult part of playing Hank Williams?

Tom Hiddleston: I think the most difficult part was actually my own psychological evaluation of his demons. As an actor, it’s my responsibility to figure out why he was so self-destructive and to try and find the center of that and those inclinations.

He was unintentionally cruel, I think, because he lived a rough life. He was addicted to alcohol and to prescription drugs, and usually those afflictions are symptoms of a deeper problem or a hole in the heart of someone. I was just trying to find that hole and where it came from. I think that part of Hank was mysterious and elusive and perhaps even mysterious to himself. I don’t know.

Melissa Parker (Smashing Interviews Magazine): Did you know much about him before preparing for the role?

Tom Hiddleston: I knew the songs. I knew four or five of his biggest hits. I think “Hey Good Lookin’” is one of those songs right up there with “Happy Birthday.” If you start singing it anywhere in the world, people will start singing with you. But I didn’t know much about his circumstances or his story. I certainly didn’t know that he achieved everything that he achieved in a very short space of time, which was really about five or six years.

Melissa Parker (Smashing Interviews Magazine): You sing every single note in the film. Have you had musical roles in the past?

Tom Hiddleston: Nothing like this, no. I sang in a Shakespearean production of Cymbeline once about ten years ago. It was supposed to be slightly cringeworthy, and it was (laughs). That’s the only other time I’ve sung.

Melissa Parker (Smashing Interviews Magazine): Is this the start of more musicals for you?

Tom Hiddleston: I don’t know. I do feel like the thing it has given me is a little more confidence, so that if any musicianship comes up again, I will feel less bashful about going for it. Music’s a huge part of my life, as it is a part of everyone’s life. It’s the most immediately evocative of an emotional art form, and I use it all the time as an inspiration. I hope that music stays a part of my work, but I’m not about to release a solo alum, if that’s what you mean (laughs).

Tom Hiddleston: (laughs) You made my assistant laugh.

Melissa Parker (Smashing Interviews Magazine): Did you speak to Hank, Jr. or Holly before filming?

Tom Hiddleston: I spoke to Jett, his daughter, on the set. I spoke to Holly after we made the film. She wrote me a letter that was one of those letters you keep forever. She loved the film. I think she was so tickled by the fact that a Brit had played her grandfather. She said it was uncanny sometimes at certain angles and in certain lights, just my profile looked exactly like Hank. I loved reading about her favorite scenes. She loved the scene where myself and Elizabeth Olsen as Hank and Audrey sing “I Saw the Light” a cappella to Hank, Jr. who’s only days old as a baby. She found that very touching.

I haven’t spoken to Hank, Jr. I believe the memory of that time for him is so delicate. He knew the film was being made and didn’t have a problem with it, but he didn’t necessarily want to talk about it, which I understood.

Melissa Parker (Smashing Interviews Magazine): Over dinner, director Marc Abraham said he had a really strong feeling that he was sitting with the person who should play Hank Williams, and that you didn’t have to do an official reading for the part. Is auditioning a thing of the past for you now, and if so, does that mean that you have “made it,” so to speak?

Tom Hiddleston: Well, I don’t know. I don’t really count my chickens before they’ve hatched. There are some things that I don’t have to audition for anymore that I guess directors and producers feel they’ve already seen something in my previous work that is enough to give them confidence I might be equipped with the right tools to deliver what they need. But you never say never.

There might be a situation where I do have to audition, and it’s something that everybody wants, it’s very competitive, and the director needs to put me through my paces and see what I can do. So, we’ll see. We’ll see. I don’t think any actor ever quite feels like they’ve made it because there’s so much more life to live and many more films to make.

Melissa Parker (Smashing Interviews Magazine): Why do you do what you do, Tom?

Tom Hiddleston: That is a great question. I do what I do because I believe in the power of art to change the world. It doesn’t change the world in the same way that legislation changes the world or new political infrastructure or those kinds of things. But I think cinema has the power to change the hearts and minds of an audience for an evening and possibly encourage reflection, to reinforce people’s empathy and compassion and make us feel like we’re all connected as opposed to disconnected.

The reason I wanted to become an actor is because that’s what actors did to me as I was growing up. In my teens and in my twenties, I was so touched and moved by the generosity of actors in telling stories and telling them in such a human and nonjudgmental way. That’s why I do it. I think the world would be immeasurably more impoverished without dramatic arts whether it’s theatrical or cinematic. I’ve no arrogance to suggest that I’m at the front rank with those people, but I enjoy being a part of the community.