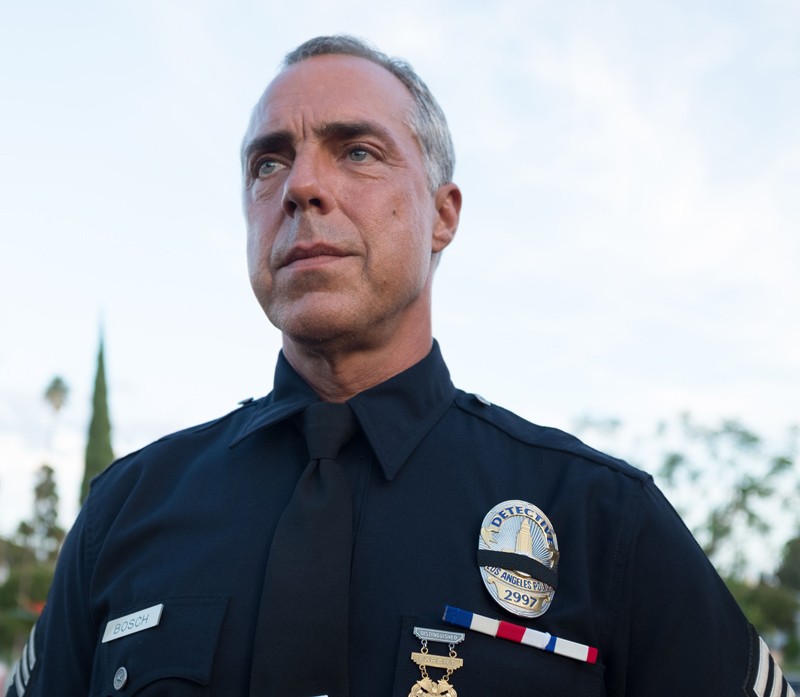 Titus Welliver stars in the police drama series, Bosch, produced by Amazon Studios. The show centers around Harry Bosch, a veteran homicide detective in Los Angeles, and is based on the bestselling novels by Michael Connelly. The second season premiered March 11, 2016.

"My thing is that I’m not necessarily partial to drama. It just sort of seems to be where I more often land. Perhaps there is a perception in the industry of me that I only play these intense characters. One of the nice things about playing the character of Bosch is that he has a sense of humor. He’s not a guy given to break into song (laughs). But he has a sense of humor. There are moments of levity within that character. He’s not humorless."

Melissa Parker (Smashing Interviews Magazine): What drew you to the role of Harry Bosch, Titus?

Titus Welliver: I would say what drew me to Harry Bosch was certainly that the script was incredibly well written. I was very drawn to the aspects of the character being such an anti-hero rather than being a bit of a contrived, cookie-cutter cop character. He’s a guy who’s heavily nuanced and very accessible, I think, to audiences because of his humanity. He’s fallible. There’s a vulnerability about him. There’s a very distinctive, profound sadness about him and a hardness as well, but also a fairness. He’s not brutal. He’s not corrupt.

Harry’s a guy who has really a flawless moral compass and is driven and relentless in his pursuit of justice. He’s very human, you know. He’s very human. He’s not the standard fare. Sure, okay, he listens to jazz, and in the first season he smoked, but we see him kind of evolve.

Titus Welliver: Harry’s not an overly verbal guy. When he speaks, it’s specific. He’s not a small talk guy. He’s not a political animal. He doesn’t speak much. I guess it’s typical that an actor wants to say as much as he possibly can, but there are times when I tell them, “I don’t think I should say anything.”

We also have these periods in the show where we find Harry very isolated, very much alone with his thoughts, and there is no dialogue. That’s one of the great challenges of this character, how to depict that emotional quality of the character without dialogue.

Melissa Parker (Smashing Interviews Magazine): Perhaps the character will continue to evolve in season two. We see him running in the first episode of the new season, and he quit smoking. Do we know what he’s done during his six-month suspension, and has he mellowed at all?

Titus Welliver: Well, we don’t really get that much insight. The running idea was something I came up with as a way to imagine that he was probably deeply contemplative in his six months of suspension, having no contact with the police department and spending time with his daughter.

We find him with this big, long beard, and he’s running, so I think he has probably obsessed over the idea that the Waits character was able to get a hostage between the two of them and has probably replayed his assessment of his process in trying to capture Waits over and over again. Harry’s thinking, “Where did I go wrong?” because he’s such a contemplative character and a guy who always seems to be in a state of observation.

As far as Harry having mellowed, he comes back in his totality. In reality, he’s the same guy. Harry has enough sense to say, “I’m going to go back to work. I’m going to maybe keep my elbows in a little bit and try to behave myself.” But old habits die hard, and within a short time, he’s back to himself. Even Edgar, Harry’s partner, comments, “I can see that this time off has really mellowed you.” (laughs) But he really doesn’t miss a step.

Melissa Parker (Smashing Interviews Magazine): Jeri Ryan joins the cast for season two. Will this be a romantic attraction for Bosch?

Titus Welliver: Her character is very integral to the case and the story. Many people may think that she must somehow be a romantic liaison for Harry, but she is not. She definitely has a tremendous amount of power. Without giving anything away, she’s crazy like a fox, and that character is really beautifully played by Jeri. She really pulls out all the stops.

I think it’s wonderful for Jeri to flex some other muscles that maybe people haven’t seen her flex before. She was great and a wonderful pleasure. Jeri and I had worked together many years ago on Star Trek: Voyager. She really hit it out of the park.

Titus Welliver: The case takes Bosch to Las Vegas where his ex-wife lives. It takes him to Vegas because the man is a money launderer and a pornographer. He’s laundering money for the Armenian mob and is also connected to the Russian mob, the Bratva. Bosch is tracking the man’s movements leading up to his death, and that takes him to Vegas. Harry’s dealing with a very large criminal enterprise, so the stakes could not be higher for the character.

Melissa Parker (Smashing Interviews Magazine): You’ve played in many dramas, thrillers and cop shows. Do you enjoy the dramatic roles more than the comedic ones?

Titus Welliver: My thing is that I’m not necessarily partial to drama. It just sort of seems to be where I more often land. Perhaps there is a perception in the industry of me that I only play these intense characters. One of the nice things about playing the character of Bosch is that he has a sense of humor. He’s not a guy given to break into song (laughs). But he has a sense of humor. There are moments of levity within that character. He’s not humorless.

But no, those comedic opportunities don’t seem to necessarily present themselves. If you spoke to anybody who knows me personally, certainly the cast and crew of Bosch, they would tell you that I’m probably inordinately a silly and immature 55-year-old man (laughs).

Melissa Parker (Smashing Interviews Magazine): Your dad, Neil Welliver, was an artist known for his landscape paintings, and you were interested in an art career at a young age. Why did you choose acting over painting?

Titus Welliver: I went though a very formal training with my father, starting around the age of 12 and initially had done a year of art school. But I quickly found that my interest, or moreso my passion, was leaning toward acting. My father, after an uneventful year at art school, asked me, “Do you want to be a painter?” I said, “Yes!” Then he said, “But must you be a painter? Is that what wakes you up in the morning?” I said, “No.” He said, “Then don’t pursue a career as an artist.”

My father used to say that all art is a little long and a little boring. He also said that the journey, which I experienced in observing my father firsthand, is very difficult, and you do have to pursue it in the same way as in any discipline of the arts. It has to be something you must do rather than something you’d like to do. I got a tremendous pleasure out of acting in high school and college. Then I ultimately made the decision really to pursue my education and hence my career as an actor because it’s something that I had to do.

I do paint. I hadn’t painted in over 25 years when I picked the brush back up, but I continue to paint and have shown my work at several one-man shows and a couple of group shows. I currently have a painting on display at the US Embassy in Azerbaijan.

Melissa Parker (Smashing Interviews Magazine): You are returning for the third season of Agents of S.H.I.E.L.D., so I assume Felix Blake has not yet met his demise?

Titus Welliver: No. He got terribly thrashed by that cyborg character, Deathlok. I was really thrilled when they brought Blake back, and hopefully that can be continued, although one never knows.

I’m someone who really grew up on Marvel Comics, and it’s great to work with my dear friend, Clark Gregg. He and I have been friends for 30-something years. It’s always a great thrill to get back onto that set and be with someone whom I have such great love and respect for. It’s a double whammy of happiness for me.

Titus Welliver: I love watching Agents of S.H.I.E.L.D., obviously, even when I’m not on it. I really like the Netflix show Daredevil. I love the comic book universe, so I watch Gotham and The Flash. One of my good friends, Donal Logue, is on Gotham. I initially tuned in to watch it because of Donal and because I’ve always been more of a Marvel man. I watch Gotham, Green Arrow and The Flash.

I worked with Ron Perlman on Sons of Anarchy, and it’s also an amazing show. I really love Hand of God. I think Ron and and Dana Delany, who’s a very old and dear friend of mine as well, are great. I admire Jeff Tambor’s work in Transparent. I like The Man in the High Castle because I’m a big Philip K. Dick fan, so when I found out Amazon was doing that, I tuned in.

It’s not lost on me that three of those shows I cited are also Amazon shows. That’s in no way, shape or form some contractual obligation to be a shill for Amazon. I genuinely enjoy those shows. I’m not a big reality TV guy, but one of my great guilty pleasures is to watch North Woods Law about the Maine wardens. I have some connective tissue to that world. The boarding school I attended that was established in the 20s or 30s went belly up in the 80s, but is now the Maine State Police Academy, and they periodically show my boarding school on that show.

I’m all over the place with my watching. I also tend to re-watch a lot of television that I grew up with, everything from the original Mission Impossible to the Adam West Batman of the 60s, Man from U.N.C.L.E., Mary Tyler Moore, All in the Family. I go back and look at that stuff because it still works. It’s still really good.

Melissa Parker (Smashing Interviews Magazine): Are there other projects you’d like to mention, Titus?

Titus Welliver: I just finished filming a new movie with Ben Affleck starring and directing, Live by Night. This is the fourth film I’ve done with Ben. It’s always great to work with one of the finest actors and directors out there. The scope of this film is quite big, and I think people are really going to enjoy it.

Other than that, like any other actor, I’m reading some scripts and looking for my next job until we hopefully, God and Amazon willing, come back for many more seasons of Bosch.

« Shooter Jennings Interview: "Marilyn Manson Was My John Lennon Growing Up. I Worshipped His Records."
Elizabeth Olsen Interview: "I Saw the Light" Star on Becoming Audrey Williams and Reprising the Role of Scarlet Witch in "Captain America: Civil War" »