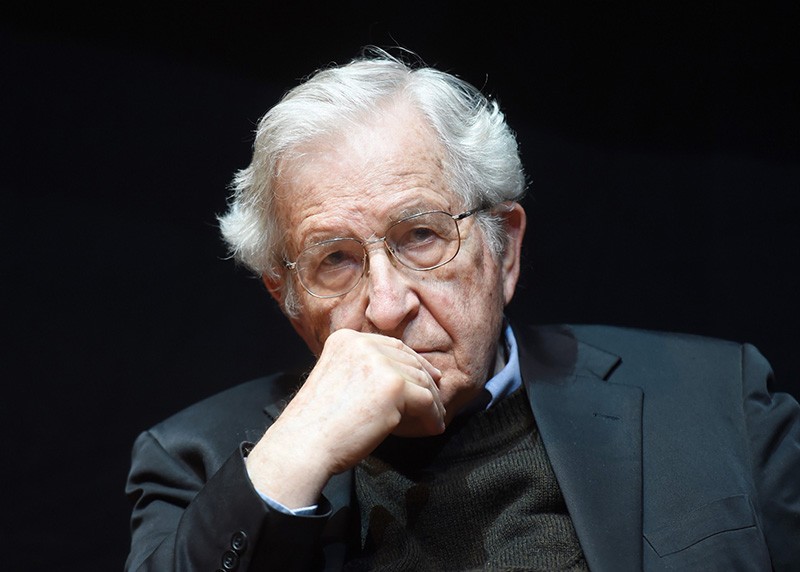 In a frequently cited interview with Smashing Interviews Magazine, just weeks prior to the 2020 presidential election, leading intellectual Noam Chomsky warned the United States that then-President Donald Trump posed a dangerous threat to American democracy if he lost the Electoral College.

Chomsky, Institute Professor and Professor of Linguistics Emeritus at MIT and Laureate Professor in the Department of Linguistics at the University of Arizona, painted a scenario eerily similar to the events that took place on January 6, 2021, when armed insurectionists called to action by Trump – who had lost his re-election bid to Biden – breached the United States Capitol in Washington D.C. in a failed attempt to overturn the election results.

"Unless Trump wins the electoral college, every scenario they run leads to civil war if Trump and the Republicans just refuse to accept it. There are a lot of options they could pursue to try and undermine it. It’s like the actions of a dictator in a neo-colony somewhere, a small country that has a military coup every couple of years. There is no historical precedent for this in a functioning democratic society. That’s deterioration of democracy at a level we’ve never seen before and being taken very seriously in the most respectable places," Chomsky forewarned.

"I mean, things that are being said by sober conservative voices around the world you can hardly believe. It’s hard to find a more respected, sober, correspondent commentator than Martin Wolf of the Financial Times. He wrote that western society is in a crisis, and if Trump is re-elected, it will be terminal. You don’t hear comments like that."

According to Chomsky, it wouldn't have been enough for Biden to simply win the election; he also had to assume the presidency to stave off a Trump-led coup.

"It’s not enough for him to win. He has to take office. That’s a gap that hasn’t arisen before in the history of parliamentary democracy, but it’s arising now because we have a sociopathic maniac in the White House. The party that’s in his pocket recognizes if they can’t hold on to power by some device or another, they’re going to be lost. They’re going to pull out the stops no matter what it takes to try and hold on to power. So unfortunately, there’s a difference between Biden being elected and Biden being in the White House in January," he stated urgently.

Chomsky, a prominent political dissident, went on to describe the homogenous American political landscape that fostered an authoritarian figure like Trump and provided his path to power.

"Trump is an extreme version of what has happened to the Republican Party over roughly the last 60 years or more. The Republican Party has a deep problem. It has almost totally sold out to the very rich and the corporate sector. The United States is basically a one-party state, the business part, but there are two factions, the Democrats and the Republicans. If you go back to the 60s, they’re really not very different," Chomsky explained.

"There’s a split in the Republican Party. The moderate Republicans are basically indistinguishable from the Democrats, but the Republicans are more business oriented than the Democrats. And they cannot come to the Republican base and say, 'Vote for me. I want to harm you in every possible way and sell out to the rich and the corporate sector.' They can’t converse that way for some strange reason, so they had to turn to other issues and what is called the 'southern strategy' that was actually started by Goldwater. One of the main Republican strategists in the mid 70s, Paul Weyrich, realized that if the Republicans pretend – and I stress pretend to be opposed to abortion – they can pick up the evangelical vote. So they all switched sides."

In Chomsky's view, modern-day Republican presidents shifted their own personally held political positions on important social issues in order to attract the ultraconservative voting base.

"Ronald Reagan, George H.W. Bush and others have all been basically pro-choice. Reagan, when he was governor, passed one of the strongest women’s rights legislations in the country. Their position was that abortion was not the government’s business. It was private business. But they all got the message, and they all decided that they would pretend to be opposed to abortion so they could pick up that vote. Same with gun rights. It’s a real scam. They turned gun rights into a matter of holy writ because they could pick up votes from part of the population that way," he expounded.

Chomsky further explains that the Republican Party appropriated an anti-feminist platform as a means of survival.

"A couple of decades prior to the Civil War, the mythology was created that the women on the plantation, the delicate women had to be defended by the chivalrous males. It’s total mythology. But Phyllis Schlafly picked that up and said, 'Okay. We oppose feminism because they try and destroy these delicate women who have to be protected by the chivalrous males, and it would force women to join the military.' It resonated with a large part of the population. The general point is that the Republican Party, in order to survive, has to instruct a set of cultural issues, things that the corporate sector doesn’t care much about but they can pretend to be for like guns, anti-abortion, opposing women’s rights, making sure that pastors can preach politically in churches, things like that," elucidated Chomsky.

"If you get that constituency together, you have a certain voting block. Meanwhile, you can stab them in the back at every opportunity, which is what they’re doing. And Trump is a genius at it. With one hand, he tells them he’s for the working class and makes some comments about guns. Meanwhile, with the other hand stabs them in the back. Take a look at Trump’s socioeconomic programs. They harm the general population, including the people he’s pandering to, but he’s managed to carry it off."

« Aerosmith's Joe Perry on His Jekyll and Hyde Relationship with Steven Tyler
Bindi Irwin: What My Crocodile Hunter Dad Was Really Like »