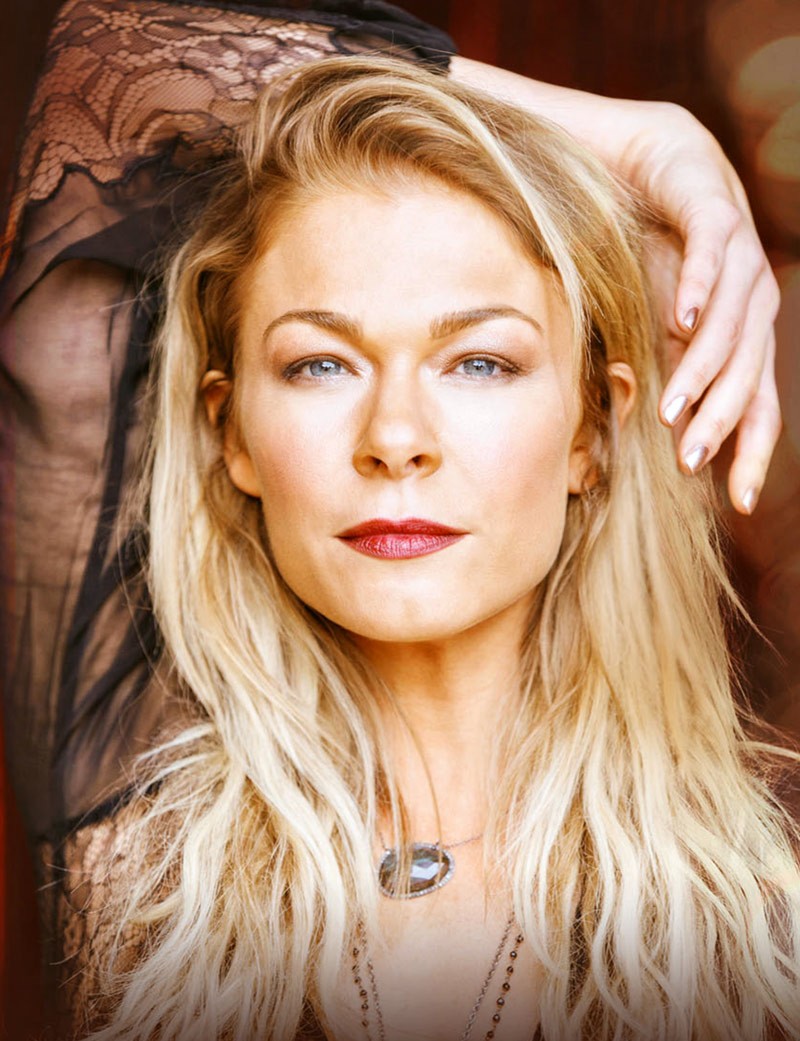 Rimes has placed 42 singles on the Billboard Hot Country Songs chart, 13 of which are Top 10 hits, and has scored numerous hit singles in her career, including “Can’t Fight the Moonlight” which went #1 in 11 countries and “How Do I Live,” which is the second longest charting song ever on the Billboard Hot 100 chart.

On July 17, 2014, VH1 began airing the reality show LeAnn & Eddie, a revealing glimpse into the private and professional lives of the singer and her actor husband, Eddie Cibrian. The series was cancelled after an eight-episode season.

"I’ve always loved Christmas. It’s just my absolute favorite holiday. Honestly, I do every holiday pretty big, but I love Christmas. I recorded my first Christmas album several years ago, and we did a Christmas EP last year. This time around, I wanted to stretch it out a little bit and do a full record. It’s just been fun. It has just been Christmas for me the last few years like all year long (laughs). But it was just fun to make holiday music. I always feel like it’s something I want to leave my mark on in a way, hopefully have something that lasts for many years and build some classics in there somehow (laughs)."

Today is Christmas, Rimes’ new holiday album, was released on October 16, 2015. She will embark on her annual holiday tour, beginning on December 4 in Tacoma, Washington.

Melissa Parker (Smashing Interviews Magazine): LeAnn, you are getting me into the Christmas spirit early, although I do love the season. Why did you decide to go in that direction for the new album?

LeAnn Rimes: I’ve always loved Christmas. It’s just my absolute favorite holiday. Honestly, I do every holiday pretty big, but I love Christmas. I recorded my first Christmas album several years ago, and we did a Christmas EP last year. This time around, I wanted to stretch it out a little bit and do a full record. It’s just been fun. It has just been Christmas for me the last few years like all year long (laughs). But it was just fun to make holiday music. I always feel like it’s something I want to leave my mark on in a way, hopefully have something that lasts for many years and build some classics in there somehow (laughs).

Melissa Parker (Smashing Interviews Magazine): I think the standout on this album is “Joy,” which showcases your wonderful vocal range and is a medley of “God Rest Ye Merry Gentlemen,” “Angels We Have Heard on High” and “Hark, the Herald Angels Sing.”

Melissa Parker (Smashing Interviews Magazine): Was the production difficult on that song?

LeAnn Rimes: Thank God we have amazing technology these days! A lot of it was programmed. We had some fantastic vocalists, including myself. No, I’m just kidding (laughs). But, yeah, background vocals are just my least favorite thing to do because you’re constantly singing the same parts all over and over again, but for a song like that, it’s really what it was based around. I love the classics. They’ve been done over and over again, so it was a way to combine all of these great songs that I grew up with and loved, but do it in my own way and have that sound on the album. It’s definitely one of my favorites, too.

Melissa Parker (Smashing Interviews Magazine): Why did you choose to collaborate with Gavin DeGraw (on “Celebrate Me Home”) and Aloe Blacc (on “That Spirit of Christmas”)?

LeAnn Rimes: Gavin and I worked together actually last year on a TV show and ended up just hanging out with coffee saying that we should work together. I always wanted to corroborate with someone on the record, and I started thinking about Gavin saying, “I know we talked about that. What songs could we possibly do? Let’s do ‘Celebrate Me Home.’” That song is incredibly hard to sing, and so there were very few people I could choose to collaborate with. Gavin was the first person to come to mind because he’s so talented and so soulful, just a beautiful guy, so it just kind of happened organically that way.

“That Spirit of Christmas” is a Ray Charles song. I’ve heard snippets of it a million times actually watching Christmas Vacation. I’ve always wondered what the rest of the song sounded like. I fell in love with it. Of course, I love Ray Charles. Aloe just came to mind. I saw him perform at an event, and I loved his spirit. He has one of the sweetest spirits, and I thought that song would work so well with his style. Those two are my favorites, but I guess I have a reason for all the songs on the record to be my favorites (laughs).

LeAnn Rimes: I think that was just me. I grew up with so many styles of music and experienced so many styles. Since I’ve gotten older, I find that naturally what comes out of me is pretty soulful. I think that’s the vibe on the record. I love the horns and the stacking of vocals. It brings me back to … it’s definitely a classic. I’m from Mississippi, so I have soul in me deep down. It’s just something I feel came naturally out of me on the record. I grew up with Michael McDonald singing “Little Drummer Boy.” That’s the version I remember. He’s a pretty soulful gentleman himself, so listening to that probably influenced it coming out that way.

Melissa Parker (Smashing Interviews Magazine): What is your earliest memory of Christmas during your childhood in Mississippi?

LeAnn Rimes: Oh wow. I can’t firsthand recall it, but from seeing photos I love so much is Christmas morning with me wearing Smurf pajamas with a mini piano, just like a little toy piano for a kid. I got that and an Easy-Bake Oven. I was truthfully so happy. I was probably four. But Christmas has always been a big thing. I moved to Texas when I was six. My godparents always did Christmas really big, so it has been a big thing in the family. I started to carry on that tradition to decorate and do the whole deal at our house. We put Santa up on our house last Christmas (laughs).

Melissa Parker (Smashing Interviews Magazine): How do you, Eddie and the boys celebrate?

LeAnn Rimes: It’s great. Having kids makes it only sweeter. They’re eight and twelve, so we’re trying to keep them kids as long as possible. The oldest, of course, does not believe in Santa Claus pretty much anymore. The eight-year-old is questioning, but we’re still trying to keep him knowing for sure if there is a Santa Claus. It’s awesome just having them around.

We have the kids Christmas morning every other year, so it changes when there is just me and Eddie. It’s usually like breakfast in bed and staying in pajamas, and when the kids are here, it’s awaking at 5:30 AM with paper flying everywhere. It changes every year, but it’s something that’s really special to our family. I’m usually off the road by then and can have a few weeks at home just to chill out. It’s a very relaxing day for us, to be honest.

Melissa Parker (Smashing Interviews Magazine): What does the “Christmas spirit” mean to you?

Melissa Parker (Smashing Interviews Magazine): How do you and Eddie feel about the reality show being cancelled, and is there anything you’re working on together now?

LeAnn Rimes: The reality show was super fun. We got to do it in a way that really was full of humor, and it wasn’t full of drama. That’s who we are. It was fun to be able to work together on that and do something that really had our personalities worked around it. I don’t even know how our life would be if we were on the air right now, but I think it was a good thing we got to show people who we are and put to rest all the craziness that has been said about us which is completely opposite of who we are.

We had a great time doing it, so it was a success for us. We got to work together and have a blast. People on social media kept saying they loved the show. It was fun for the time being, and now on to so many other things. We don’t have any plans to work together anytime soon except at home to be a family (laughs).

LeAnn Rimes: I feel like country music has lost, for me at least, what I love so much about what I grew up on like the music of Patsy Cline, Hank Williams and Mergle Haggard. There was just an honesty about what they wrote about their lives. Everybody wasn’t saying the same thing and sounding the same. I can’t tell the difference between many artists these days. For me, I still like older country music and the great stories it tells.

Melissa Parker (Smashing Interviews Magazine): Tell me about the tour and what’s next after Christmas.

LeAnn Rimes: We did the Christmas tour last year on the east coast, and now we’re doing the west coast this year. I’m actually very excited for this tour because I have my first Christmas record, I have the EP and everything that’s off this record which is huge. We’re just starting to put the set list together, and I don’t know what all to choose yet. It’s always great with the fans because I feel like I’m performing in a huge living room. I hope they feel they’ve gotten to know me better when they leave the show because it’s a great night of music.

It’s always a different kind of vibe during a Christmas show, but it’s Christmas. It’s the holiday. After that I’m going to take a couple of weeks off. I have a lot of stuff coming up that I can’t talk about just yet, but announcements will definitely be coming in January, so I have a lot of exciting things on the horizon.

« Steven Pinker Interview: Inside the Mind of One of the World's Most Influential Thinkers
Zoe McLellan Interview: "NCIS: New Orleans" Star Loving Life in the Big Easy »