LeAnn Rimes Interview: "It’s Difficult to Sit Around and Hear People Lie About You Constantly" 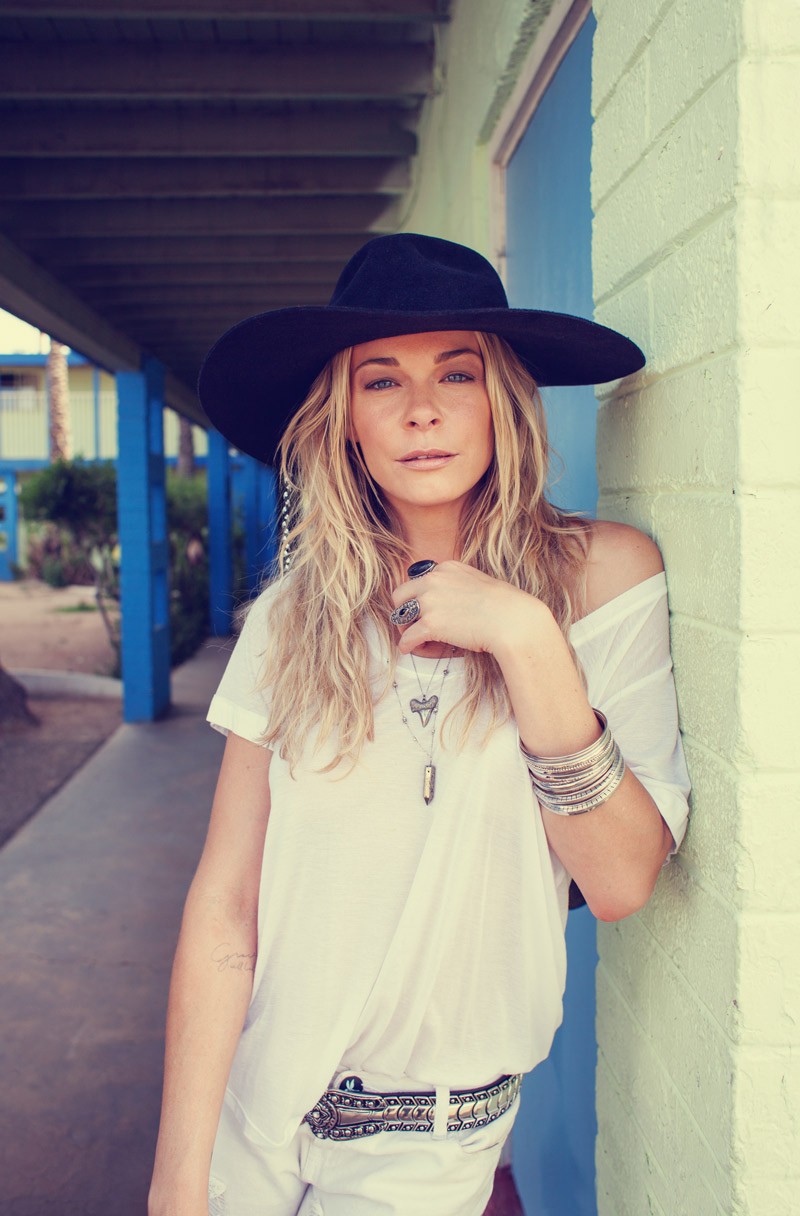 LeAnn Rimes rose to stardom at age thirteen singing the Bill Mack country song “Blue” and released her debut album of the same name in 1996, which went to number one on the Top Country Albums chart. After that, she moved toward country pop with the 1997 album You Light Up My Life: Inspirational Songs that set the trend for a string of albums released into the next decade.

"It’s difficult to sit around and hear people lie about you constantly and people selling magazines and making money off of lies that have nothing to do with your life. Acceptance is really an amazing thing. If I can’t change it, I’ve learned to accept what I have to and stand up for myself when I need to. It’s sad what people believe and that people are so gullible reading that magazine they picked up in the grocery store line and believing it for some reason. It should be what it is, just entertainment. It should not dictate someone’s career and life."

For the first time ever, the award-winning songstress and her Hollywood hunk of a husband (Eddie Cibrian) are giving fans a revealing, humorous glimpse into their private and professional lives in LeAnn & Eddie, a VH1 reality series. On August 5, 2014, Rimes released a greatest hits remix album called Dance Like You Don’t Give A …

Melissa Parker (Smashing Interviews Magazine): LeAnn, is it up to everyone to fill in their word of choice at the end of Dance Like You Don’t Give A …?

LeAnn Rimes: Yeah. Yeah. I guess so (laughs). There’s the obvious one, which I think, came to mind when we titled the record, but my friend, Darrell Brown, who co-produced and writes with me, came up with the title. I was laughing at it, and then I’m like, “You know what? That has to be the title of the record.”

Melissa Parker (Smashing Interviews Magazine): I’m also intrigued with the photo of you on the cover. It truly looks like an “I mean business” pose (laughs).

LeAnn Rimes: Actually that was shot two years ago now on the top of the Roosevelt Hotel. I was actually standing on the sign, which, I mean, I don’t know how many people have stood on the Roosevelt Hotel sign in LA in lingerie, but I did it. It was fun. My photographer who’s a friend of mine said, “I really want you to scream for one shot,” so I let out this huge scream. That’s the only photo we have of that, but I felt like it totally fits the record. I love that cover.

Melissa Parker (Smashing Interviews Magazine): Is this album all you – your decision, your choice of songs?

LeAnn Rimes: A lot of my fans have been asking for this for a long time to have all of my remixes on one record, so this is really directed toward them. I have a huge following in the dance world. Obviously I approved everything, approved and chose the songs, so I had a hand in it, but this is the last release I’ll have on Curb to be promoting.

Melissa Parker (Smashing Interviews Magazine): Do you have any ideas about new music projects?

LeAnn Rimes: Oh, I have plenty (laughs). I have too many. I love singing. I’m at that place right now where I can do anything, and I’m just really taking my time. I was headed in one direction, and I pulled myself out of that, and I’m glad of that. Now I’ve been kind of experimenting and really trying to figure out exactly what that next step is, meeting with labels and just really trying to find the right partner.

I’ve never really had a partner at a label, so getting someone who’s on the same page as me now … I’m almost 32 … at this stage of my life … well, it’s recreating. That’s really what it is. I feel like I’ve had an amazing twenty years, and it’s almost like I’m wiping that clean and starting all over again. I’m searching and staying still and letting it come to me because it will happen naturally when it does.

Melissa Parker (Smashing Interviews Magazine): You’ve been in the news lately by tweeting a butt photo.

Melissa Parker (Smashing Interviews Magazine): After all of these years of being in the business, do you ever get tired of the starpower, the gossip, people just hanging on your every word?

LeAnn Rimes: Oh yeah. Now moreso than ever. When I first started, it wasn’t so severe as severe as it is now and so crazy as far as celebrity driven. It was all about music, and that’s obviously what I want to do, what I love to do. But everything changed, and it is so celebrity driven. You don’t really have to have much talent these days. People are more concerned about fame than talent.

It’s difficult to sit around and hear people lie about you constantly and people selling magazines and making money off of lies that have nothing to do with your life. Acceptance is really an amazing thing. If I can’t change it, I’ve learned to accept what I have to and stand up for myself when I need to. It’s sad what people believe and that people are so gullible reading that magazine they picked up in the grocery store line and believing it for some reason. It should be what it is, just entertainment. It should not dictate someone’s career and life.

Melissa Parker (Smashing Interviews Magazine): Do you feel the reality show (LeAnn & Eddie) has been successful as far as the two of you getting your story out there?

LeAnn Rimes: Our lives are very simple, but the chaos that sometimes goes on within our lives … it’s funny. That’s how we cope with a lot of things … we laugh. We’re huge smartasses, and we give each other crap. If there’s a joke there to be had, Eddie and I are not afraid to take it. That’s just who we are. I feel like people get to really see us. That’s the constant through the show.

We dug into some of these crazy tabloid rumors that happened over the past five years. Some of the show happens in real time, and some of it doesn’t. We had to dig back into some things that happened over the years and show people how we’ve dealt with them. There’s no script. There’s no dialogue. It’s just Eddie and me in these situations, and whatever comes out comes out. We have more fun than we thought we were going to have. You really kind of get to know our families and our friends. We really have some characters in our group. It’s just really about entertainment. That’s what Eddie and I want it to be. That’s what we do for a job.

It’s great to be able to work together in an unscripted world and be able to have fun with that and to have people to see who we actually are as human beings. It’s great to be able to do that, and it’s very tongue in cheek. Who knows if we’ll do it again? If we do, it comes down to the fact that we want to make people laugh. When you get through watching the show, we want you to have had a good time. That’s really what it’s all about.

Melissa Parker (Smashing Interviews Magazine): Looking back now, would you do it all over again, performing in talent shows at age five, touring nationally at age nine, or was that too much responsibility placed on you at such an early age?

LeAnn Rimes: Oh of course, But how do I know that at eleven when I signed a record deal? How would I know that? It’s not until you get older and start becoming an adult yourself and start seeing things with your own eyes that you really think, “Oh my gosh. That was a lot.” The difficult part of myself that all of that left behind and had not been dealt with, I had to deal with. I had to sift through it like every human being. Mine was just different.

I’ve really come to terms with a lot of it. On the other side, I don’t regret anything. I hate that word anyway, and I hate the word hate. I really don’t like it (laughs). But I feel like it was just my past. It’s just my story. It has made me who I am. I’ve had tremendous success and have enjoyed that, but I feel like I’m on level ground right now. It’s exciting to still be this young and to be able to create. We’ll see what comes out.

Melissa Parker (Smashing Interviews Magazine): What will come out next?

LeAnn Rimes: There are plenty of things. I have the bug to design clothes, and I’m sifting through all of that and getting all of it organized. I also don’t want everything to have to be the LeAnn Rimes brand. I want to do things that stand on their own merit and be a great product. I’m playing around in that world at the moment. I would love to act some more.

Right now I’m just mostly focused on music and giving myself that space to figure out where I want to go because that’s always my first priority. The TV show has allowed me the ability to do that and also this dance record. I have a Christmas CD that will be out the end of the year, so there’s music out there. I’m having a great time, and I’m being able to actually chill at the moment and figure out what I’m going to do with my music. Acting and the rest of the stuff will come.