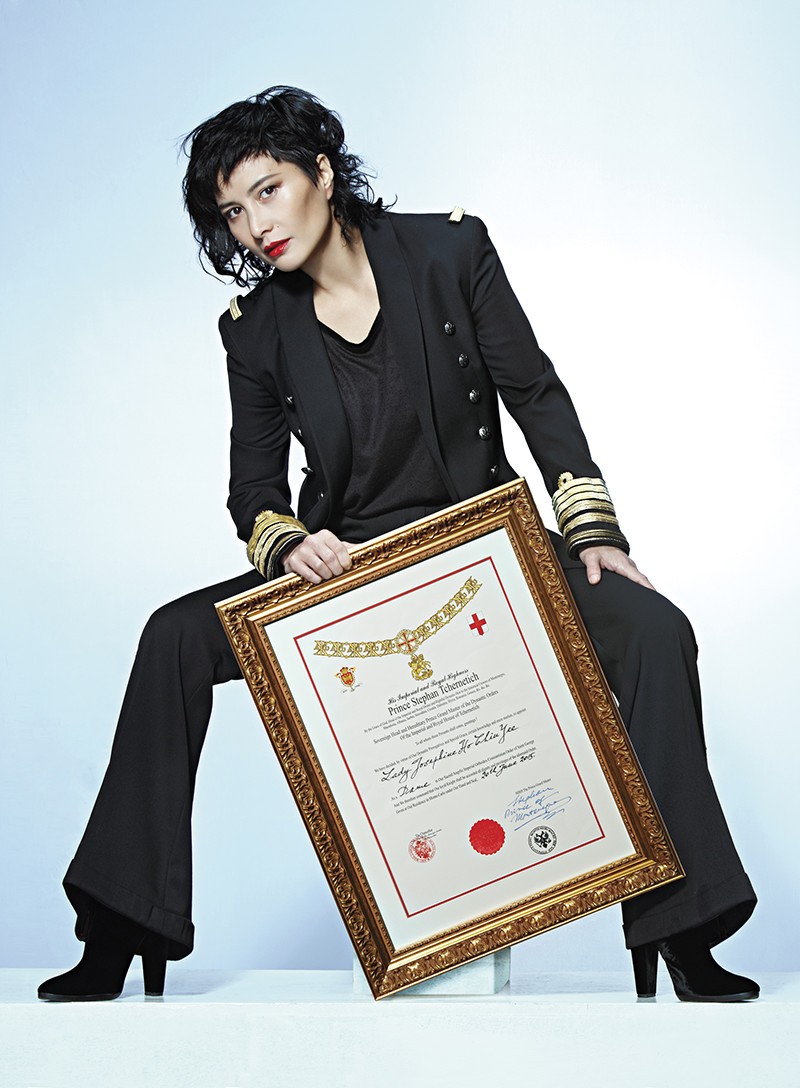 Josephine “Josie” Ho Chiu-yi is the daughter of one of Hong Kong’s richest men, Stanley Ho. She was named by Forbes as one of the “20 Most Intriguing Billionaire Heiresses who defy the stereotype of the bon-bon popping princess thanks to achievements in business, sports and the arts.”

Josie Ho, as she’s known to fans, is an indie rocker (band Josie and the Uni Boys) with several films and commercials to her credit. She began her film career in 1994, and those appearances include Chinese Box, Anna Magdalena, Purple Storm, Dead or Alive: Final, Women from Mars, The Twins Effect, Butterfly, House of Fury, Motorway, Badges of Fury, Open Grave, Naked Ambition 2, and had a cameo in Steven Soderbergh’s Contagion opposite Matt Damon and Gwenyth Paltrow.

"My music career first started when I was given the chance to perform for the Macau beauty pageant. A friend of mine saw my performance and introduced me to Virgin Records Hong Kong. It all slowly took off from there. Once I had finally become an established singer, I was given an acting opportunity by a film director friend of mine who invited me to be in a movie. Then I went on to act in some plays and to continue working on my acting skills. I am a lucky person."

Ho’s latest album is titled The Electrifying Supernatural Lady Land, and she is busy promoting her latest film, the action-sports-comedy-drama Full Strike.

Melissa Parker (Smashing Interviews Magazine): Congratulations on winning honors at the Metro Radio Guoyuli Awards 2015 on August 7! Tell me about that experience and the awards you won.

Josie Ho: It was a wonderful experience to have won three awards at the Metro Radio’s Awards. However, the most exciting part of it all was that my band Josie and the Uni Boys got to perform while we were there. It was such a pleasure! It didn’t matter that we were having some of the hottest weather in Hong Kong at the time where we had to perform in the heat. We were just grateful to be there.

I’m thankful to the Metro Radio station as well. My album, The Electrifying Supernatural Lady Land, won Best Album of the Year. My song, “Johnny Depp,” was honored as one of the best hits of the year, and Josie and the Uni Boys was named Best Asia Rock Band. We had so much fun there! I even dressed up like a female pirate for the ceremony as a nod to Johnny Depp’s Pirate of the Caribbean movies, to perform my single. It was a blast all around!

Melissa Parker (Smashing Interviews Magazine): Sounds great, Josie! How would you describe the music of your band, Josie and the Uni Boys?

Josie Ho: We definitely play mostly rock & roll style music. In addition to myself, the band is made up of four guys: Kevin the drummer, Gei Chai on bass, Don, our guitarist, and Dee. Don writes the demos, and we just jam the rest of the songs out as we play. But I must say that I actually composed our newest hit single, “Johnny Depp.”

Melissa Parker (Smashing Interviews Magazine): I obviously like the name of the song (laughs). What’s it about?

Josie Ho: That song is all about how I am such a crazy fan of his! As previously mentioned, I wrote the lyrics for it myself, and it’s about how I might be a relative of his, that I think I look like him … even going as far as calling him cousin in the song. My hope is that maybe I’ll get to meet him one day because of it. I got the idea for writing it because of the many fake telephone calls that I always receive from strangers claiming to be my friends and relatives. That, in a way, inspired me to compose this one. “Johnny Depp” is a crossover song that I sang with China’s Zhou Be Zheung.

Melissa Parker (Smashing Interviews Magazine): You star in the film, Full Strike. What’s it about?

Josie Ho: Full Strike is a really funny underdog sports movie about the comical world of competitive badminton. My role as Beast Ng is a ridiculously fun one to play as she is a former seven-year reigning champion who gets banned from the sport because of her absurd temper. She gives up on herself, starts to gain weight due to laziness and finds herself working in her brother’s restaurant because he’s the only one who will hire her. Then when she least expects it, Beast Ng (my character) comes across new unlikely teammates – recently freed former ex-cons each with hilarious backgrounds – and a chance to redeem herself. It’s a must-see film with guaranteed laughs!

Josie Ho: I have a small film production company called 852 Films, so I had suggested doing a badminton-focused movie to directors whom I admired by the names of Derek Kwok and Henri Wong. They actually ended up co-directing the movie together. I’m glad that both of them liked the idea and wrote a script with the badminton sport in mind.

Melissa Parker (Smashing Interviews Magazine): That’s an interesting concept for a film. Do you play badminton at all?

Josie Ho: I played badminton when I was in junior and high school as part of the team. When I was in high school, I won the Champion of Ontario in the female doubles competition. I’m not bragging, but it wasn’t too hard for me to slip back into playing again for shooting the film.

Production even provided us with a badminton coach by the name of Ling Yuen Ting for training before we started filming. She was on the professional Hong Kong team. All in all, the film had a good vibe when we were screening it in Hong Kong. I look forward to continue to share it with other parts of the world.

Josie Ho: I really cannot discuss much about this project yet, but I will say that I enjoyed working with the director, Eric Khoo, as well as the producers and the whole crew. Really good people all around.

Melissa Parker (Smashing Interviews Magazine): Have you ever done a nude scene?

Josie Ho: I haven’t done a nude scene before. I’ve done some sexy scenes for sure, but I doubt that I’ll ever do a completely nude one. Honestly, I don’t think that I have what it takes.

Melissa Parker (Smashing Interviews Magazine): Was it uncomfortable for you to play a lesbian in Butterfly?

Josie Ho: When I shot Butterfly, I must say that I was only a little bit uncomfortable because I had to kiss my co-star, Tien Yuen, on the lips. She had lipstick on, and that was a little bit weird. But I was happy that our audience liked it!

Melissa Parker (Smashing Interviews Magazine): What was the first American film you worked on in front or behind the camera, and how are those films difference from ones made in China?

Josie Ho: My first American film was Twentieth Century Fox’s Street Fighter: The Legend of Chun-Li. I had never even seen trailers on set before that. I also had the opportunity to shoot a picture called Open Grave. We don’t have trailers for talent in Hong Kong. We just sit around on set, or sometimes if we’re shooting on the streets, we’ll be right there onsite doing our hair and makeup, even eating our lunch and dinner with the crew. So that is certainly a difference!

Melissa Parker (Smashing Interviews Magazine): A few years ago, Forbes named you one of the "20 Most Intriguing Billionaire Heiresses.” What does that mean to you on a personal level?

Josie Ho: Yes, my name was listed in Forbes for that. It was good exposure, but that’s all I’d like to say about that. Thank you.

Melissa Parker (Smashing Interviews Magazine): Your mom encouraged you to sing as a child, but neither parent wanted you to make a career out of being a performer. Why?

Josie Ho: It was my sister, Pansy, who encouraged my singing. I never thought it would become a real career. My mother and father were a bit worried about the nature of show business in general because, let’s be honest, the entertainment industry is a bit complicated. Their concerns were valid.

Josie Ho: Yes. My parents both support me now. I guess it’s because they’ve heard and seen my work. They understand and feel that I belong here.

Melissa Parker (Smashing Interviews Magazine): How did your interest in acting and music begin?

Josie Ho: My music career first started when I was given the chance to perform for the Macau beauty pageant. A friend of mine saw my performance and introduced me to Virgin Records Hong Kong. It all slowly took off from there. Once I had finally become an established singer, I was given an acting opportunity by a film director friend of mine who invited me to be in a movie. Then I went on to act in some plays and to continue working on my acting skills. I am a lucky person.

Josie Ho: It’s fine. I sometimes let fans come up to take photos with them if that’s what they want. I’m easy and happy about it, just thanking people for their support all the time. My husband is also in a hip-hop group called 24Herbs, so he gets recognized plenty as well. We’re welcome at home. It’s nice.

Melissa Parker (Smashing Interviews Magazine): Is it difficult to have a spouse also in the entertainment industry?

Josie Ho: It’s not difficult. My husband and I are grateful for our fans’ support. We are both so lucky to have such an outpouring of love from the people who care. Simply put, we have fun living here in Hong Kong!

Josie Ho: My priority this year is hoping to find some new song inspirations for my next EP. I think it’s going to be a Cantonese EP. I don’t really have any other priorities at this moment outside of acting, producing, singing and songwriting, but I do hope that I can be home more often.

Melissa Parker (Smashing Interviews Magazine): Do you see yourself quitting in a few years to just enjoy life with your husband?

Josie Ho: I think I’ve had a perfect life. I’m a fortunate person with all good things happening around me. I’m thankful about everything that has happened to me in this life so far. Next up, I look forward to traveling to Tokyo with my cast and directors to promote Full Strike releasing there in October. I’m sure we’ll have a good time.