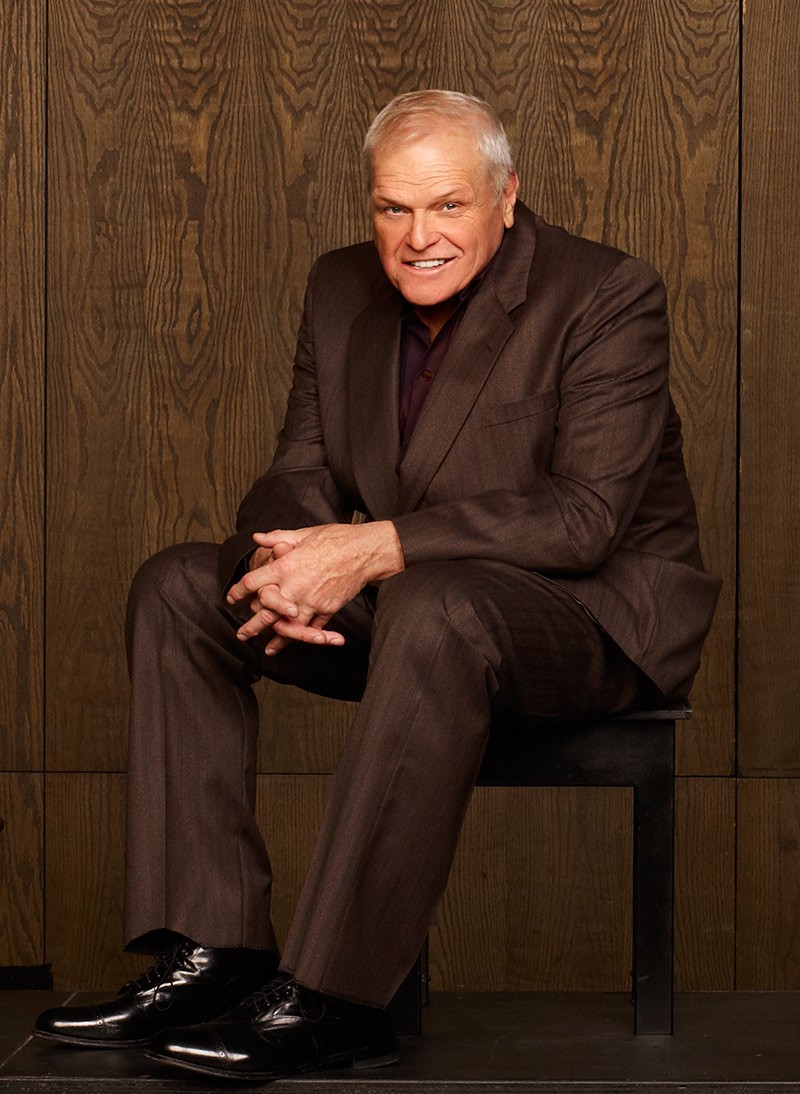 Award-winning actor of film, stage and television, Brian Dennehy gained recognition for portraying the corrupt Sheriff Will Teasle in First Blood (1982) opposite Sylvester Stallone. The film was the first of the Rambo series. Other film credits include The River Rat, Cocoon, Legal Eagles, F/X, Presumed Innocent, Gladiator, Tommy Boy, Assault on Precinct 13, Ratatouille, The Next Three Days, The Big Year and Knight of Cups.

Television appearances include Kojak, Lou Grant, Dallas, Dynasty, Cagney and Lacey, Hunter, Miami Vice, Birdland, Dead Man’s Walk, Nostromo, Just Shoot Me, The Fighting Fitzgeralds, The West Wing, 30 Rock, Rizzoli & Isles, The Good Wife, The Big C, and a host of made-for-television movies including 1992’s To Catch a Killer in which he received a Primetime Emmy nomination for his performance as serial killer John Wayne Gacy.

"It’s Irish! (laughs) It’s first generation Irish. My character is an Irishman who’s come from the old country. Because it’s American, they have a lot of other racial groups involved, but the police force during the 50s and 60s was substantially Irish, as was the fire department. It’s all different now, but there’s a certain culture that existed in the fire department and in the police department. Eddie's [Ed Burn's] father was in the Public Morals squad, so having listened to his father’s stories at his knee, that became the idea for the show."

Dennehy has won two Tony Awards, both times for Best Lead Actor in a Play. The first win was for Death of a Salesman, and the second one was for Long Day’s Journey into Night. He played Matthew Harrison Brady in Inherit the Wind opposite Christopher Plummer in 2007, and a couple of years later starred in a 2009 revival of Eugene O’Neill’s Desire Under the Elms. In 1992, Dennehy played the lead role of Hickey in Robert Fall’s production O’Neill’s The Iceman Cometh at the Abbey Theatre in Dublin.

The seventy-seven year old storied actor can currently be seen in TNT’s Public Morals, a police drama set in New York City in the 1960s. The series, created by and starring Edward Burns, counts Steven Spielberg among its executive producers. Dennehy plays mob boss Joseph “Big Red” Patton who controls the west side of Manhattan.

Brian Dennehy: Pretty good. Not bad. That’s as good as it gets when you’re my age.

Melissa Parker (Smashing Interviews Magazine): Glad to see you back on television! What makes Public Morals different from every other crime drama?

Brian Dennehy: It’s Irish! (laughs) It’s first generation Irish. My character is an Irishman who’s come from the old country. Because it’s American, they have a lot of other racial groups involved, but the police force during the 50s and 60s was substantially Irish, as was the fire department. It’s all different now, but there’s a certain culture that existed in the fire department and in the police department. Eddie's [Ed Burn's] father was in the Public Morals squad, so having listened to his father’s stories at his knee, that became the idea for the show.

Melissa Parker (Smashing Interviews Magazine): Is your character, Joe Patton, the most dangerous guy on the streets?

Brian Dennehy: Well, I think he was at one time. I think he’s gotten old. I don’t know how much you’ve seen. In fact, I’ve seen only the first two hours myself, so I don’t know what’s left exactly and what’s not left. But he’s getting old, he’s got all the money he’ll ever need, and he’s still in a very peculiar place where many of these guys were in that era, both Italian and Irish. They’re trying to make the transition from pure thugs, guys who maybe ran the laundry business in New York or the sand and gravel business that was very big with the Italians.

Paul Castellano, for example, who was killed at Sparks Steakhouse in Manhattan, was trying to move his family into legitimate businesses, not by actually buying them, of course, just by taking them over. But the point was they did begin to transition to relatively honest livings, and I think that describes Patton as well. He doesn’t want to be a mobster anymore. He wants to sleep in his bed and not worry about somebody shooting him in the head.

Patton’s son Rusty, played by Neal McDonough, has decided that’s all too boring, and he doesn’t want to do that. Hence the disagreement between the generations. It happens a lot. It most notoriously happened actually when Francis Coppola made The Godfather. That’s what motivated guys like Frank Romano and John Gotti. They wanted to be those guys. They didn’t want to be businessmen. They didn’t want to be at a desk someplace. Our story attracts that kind of story. Members of the Irish mob in those days were not sophisticated operators by any stretch of the imagination.

Melissa Parker (Smashing Interviews Magazine): Did Steven Spielberg offer you the role in the hopes that your character would be an Irish Don Corleone?

Brian Dennehy: He didn’t offer me the role personally, but one of the people who works for him did. I suggested to Eddie that Joe should have an Irish accent to more clearly represent the fact that the first generation came over from Ireland and to clearly see the difference between who he is and was in that generation and the people who came after. Eddie and Steven Spielberg both liked that, and we went with that. Apparently Steven watches every frame of the dailies which is not normally the case. Most people who are involved in the uber-producer job looks at dailies when they get a chance or otherwise lets it go, and they obviously get very involved in the final cut. But he’s a very hard working, very creative and very much a detailed kind of a guy, so I’m not surprised that he’s that involved in it.

Brian Dennehy: Yes, this is the first time I’ve worked on a Spielberg project. It’s the first time I’ve ever worked for Spielberg and how many other layers of corporations between us doing the picture and him. Spielberg, after all, is Olympian (laughs). But, I’ll tell you, he’s an amazing maker of movies. He never misses as far as I’m concerned, pictures like Munich and Lincoln are just extraordinary, serious pieces of work that are also very entertaining. He’s a legitimate genius for sure.

Melissa Parker (Smashing Interviews Magazine): You’ve done numerous television projects, and I have been a fan of yours since Cagney & Lacey in 1984. I believe you played a bounty hunter.

Brian Dennehy: Oh yeah, wow. Those were some wild and woolly days. I had a bunch of ideas for the character in those days. I remember we put in this kind of bogus love affair which never comes to anything between me, and I think she was Cagney. But you could do stuff like that in those days, have lots of character input. It was fun. I’ve had a good run. I have no complaints. I wish I could work more these days, but there just doesn’t seem to be much around for a seventy-seven year old.

Brian Dennehy: I’ve got a lot of opportunities in theater, but the problem with theater is you have to book yourself way in advance. In other words, I’d have to be making plans now if I were going to do a show in the spring someplace. What I’m trying to do at this point is see if there’s a part in a TV show available. But I love the theater, and there’s a lot of theater that I still want to do, although I’m not sure the tools are as sharp as they need to be. Right now I’ll just pick it up, dust it off, kick it in the ass, do TV for two more years, then I will go back to the theater. Of course, at my age, I don’t even know if I’ve got two or three more years. One of the interesting elements of being old is that time is a scarce commodity at the very best.

Brian Dennehy: Oh no, I can’t stop. I finished putting a whole bunch of kids through college, graduate school, medical school and law school. They have no debt, and I have no money. That’s the way that works. But I have no regrets about that. That’s one thing I learned being an Irish immigrant and something of a thinker and a reader, that your main responsibility is to make sure whatever progeny you have, you’ve got to make sure that they have the tools whereby they can live reasonably successful in this country, and we’ve done that.

Anyway, I’m not taking any credit for it. College is ridiculously expensive these days, and it’s all an artificial construct, which means it all has to do with government pumping all this money in cheap loans to people, and of course, the college is like, “So what? If you’re going to do that, we’re just going to kick up our expenses.” But anyway, cynicism is never hard to find in the system, and I managed to find a great deal of cynicism in education.

Melissa Parker (Smashing Interviews Magazine): What’s coming up for you?

Brian Dennehy: I just finished doing a very interesting little project with Michael Mayer, a very well-known director, who has just done a film, a very inexpensive film of Anton Chekhov’s The Seagull. Annette Bening is absolutely wonderful, a great broad. This little girl, an Irish actress named Saoirse Ronan, is brilliant. I don’t know if you saw Atonement, but she played the girl in the film that gets into all the trouble, but she’s about twenty-one now and just an amazing actress who’s apparently done a whole bunch of films. None of which have been released yet, but her name is on everybody’s list at this point.

Brian Dennehy: My favorite film role is Cocoon not because of the film itself, although I do think it was a good film. The reason is that I got to work with the most extraordinary bunch of people I’ve ever worked with in my life. We spent about ten weeks in St. Petersburg with Don Ameche, Jack Gilford, Maureen Stapleton, Hume Cronyn, Jessica Tandy and Gwen Verdon. All these people are extraordinary stars and are all Broadway players. Ameche, of course, was a film actor, but he was just a great gentleman and a great guy.

It was Ron Howard’s first big feature, and to spend all those weeks with those guys was, I think, the most fun I’ve ever had. It was one of the few times in my life I actually kept my mouth shut. I just listened because boy it was like going to the greatest storytelling session that was ever invented. It was just so much fun. I’ve been lucky because I’ve done a lot of interesting pictures like Gorky Park and Silverado. That’s when the movies were probably better made and better written stories. In other words, they weren’t trying to pack some kind of deep understanding about life into an otherwise underwritten script. Anyway, Cocoon was the thing I enjoyed the most.