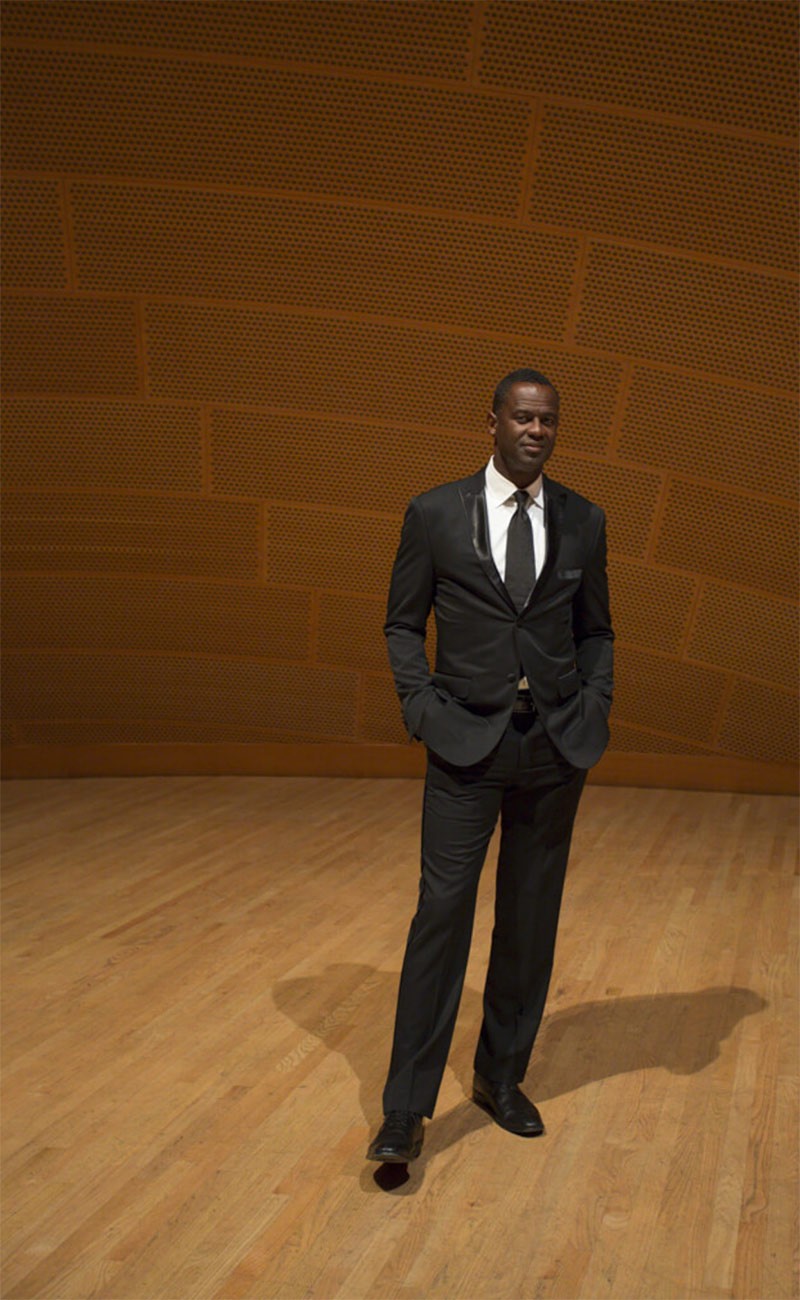 Multi-faceted singer, songwriter, arranger, producer and musician Brian McKnight has chosen PledgeMusic, the leading direct-to-fan platform, to bring his fans An Evening With Brian McKnight. This is his first release on SRG Records, via the ILS Group and Universal Music Group, since signing an exclusive label and distribution agreement.

An Evening With Brian McKnight is a live concert recorded on January 17, 2016, at the historic Saban Theatre in Los Angeles. The multi-camera live sound recording will be released on Blu-ray, CD, digital download and streaming. The collection, which will be out on September 23, 2016, will include all of Brian’s best songs plus three new compositions.

"I think the idea of a love song has changed. Most of the love songs we all loved as kids would be classified as funeral dirges now, you know, really super slow. I think nowadays the ballad has changed. It can have some up-tempo, some drums, some other things. 'Forever' would still be considered a ballad, I guess, but the tempo is probably more of a mid-tempo. The content is love song. I don’t know how to write anything else."

Over his 20+ year career, McKnight’s songs and albums have occupied the top of the charts, resulting in millions of albums sold and dozens of nominations and awards, including 16 Grammy Award nominations. A notable solo performer in his own right, McKnight has also worked with a who’s who of contemporary superstars such as Justin Timberlake, Celine Dion, Mariah Carey and Vanessa Williams.

Melissa Parker (Smashing Interviews Magazine): Why did you became involved with PledgeMusic to release An Evening With Brian McKnight?

Brian McKnight: When the label approached me about this, I didn’t really know anything about PledgeMusic. As I started to look at it, this seemed like a no-brainer, a way for you to really engage your fans, a way to tap into the media base that Pledge has.

Melissa Parker (Smashing Interviews Magazine): What made that particular live performance so special that the concert was recorded for an album?

Brian McKnight: There was so much serendipity happening that night that I can’t even begin to tell you! I wasn’t even signed to this record label when I commissioned the film company to actually film that concert. I didn’t have a live DVD.

It just so happened that the president of the Sono Recording Group (SRG), Claude Villani, had called me earlier that week and wanted to meet. I said, “Well, I have a show in LA this Saturday night. Why don’t you come out?” He flew out and saw the show. We basically signed a deal two days later, and our first release together was the DVD I had already filmed (laughs). There were a bunch of things that just started happening at that moment that made sense.

Melissa Parker (Smashing Interviews Magazine): Tell me about the new music for the record.

Brian McKnight: The single, “Everything,” is actually a song I wrote in Korea about three years ago in my dressing room. I loved the verses. I didn’t love the chorus, so it didn’t go on the CD I released in February. When this deal came about, and we needed a new sort of rhythmic ballad, it reared its head again, and I wrote a new chorus that made more sense. Again, it could’ve been one of those songs that were thrown away in another album, but I held on to it, and it became a single that is doing so well.

Then there’s a song named “Forever.” We needed sort of a mid-tempo. Once I got back signed to a record label, they started telling me what they needed, but they can’t tell me in musical terms what they need. They say, “We need a song that sounds like …” I wrote another thing about my son, and then the other was a Gino Vannelli duet.

Brian McKnight: Yeah. I think the idea of a love song has changed. Most of the love songs we all loved as kids would be classified as funeral dirges now, you know, really super slow. I think nowadays the ballad has changed. It can have some up-tempo, some drums, some other things. “Forever” would still be considered a ballad, I guess, but the tempo is probably more of a mid-tempo. The content is love song. I don’t know how to write anything else.

Brian McKnight: Well, it is, but I think it’s the one thing that we all have in common. We all want to love someone, and we want to be loved in return. I suppose that I could write about fixing cars, but then my only audience would be auto mechanics (laughs). So, that’s kind of the way I’ve always looked at it.

If I want to reach everyone no matter what they’re dealing with, no matter what their walk of life or economic situation, Democrat or Republican, at the end of the day, they want to love someone or at the very least be liked by someone. So, my content tends to be about that.

Brian McKnight: It happens in every way you can think. From the time I started writing when I was about 16, I never needed to be in a special place or light candles or have this or that right. What if I couldn’t get to that place? I needed to be able to write anytime of day under any circumstances, so at all times, there are four or five ideas going on in my head, and I don’t necessarily need to sit down to write anything. I can keep it all sort of locked in my brain, and when I go to record, all of it comes out of me.

Think of it this way. You have your iPod. You listen to songs you love, and you end up knowing those songs because you listen to them over and over again. That’s your playlist. Well, I have those songs, and I also have an entire station of songs in my head that have yet to be written, constantly playing in my head.

Brian McKnight: Well, I can put it on pause (laughs).

Melissa Parker (Smashing Interviews Magazine): You attended Oakwood College, a Seventh-Day Adventist university in Huntsville, Alabama, for a couple of years. Was that because of your religious upbringing?

Brian McKnight: It’s very much like Notre Dame. You don’t have to be a Catholic to go there. You don’t have to be seeking to be a priest to go to Notre Dame. But, it is a university that is about that. It’s a Christian school and the denomination I grew up in. Typically, if you are a Seventh-Day Adventist, you go to Oakwood. That’s the way it is. There really is no other place for you to go, and my parents are no different. I had lots of places I could’ve gone, but they were like, “Nope. You’re going there.” And, that’s the way it was.

Melissa Parker (Smashing Interviews Magazine): I believe Oakwood is where your brother’s group, Take 6, was formed in 1980. Were your parents also involved in music?

Brian McKnight: It’s my mother’s side, so all my aunts and uncles, my grandparents and all my cousins, everyone. Our church choir was basically comprised mostly of my family members on my mother’s side. That’s where the music comes from. So much so that I’m not even the best in my family, but I am the designated piano player.

Brian McKnight: I’m not. I’m really not. I promise.

Melissa Parker (Smashing Interviews Magazine): Did you have other aspirations as a child?

Brian McKnight: There were other dreams, but that was the one that presented itself. When people started inquiring about who was writing and singing the songs, and they started offering deals, a decision had to be made. I believe I made the right one.

Melissa Parker (Smashing Interviews Magazine): Have you ever had voice lessons?

Brian McKnight: No traditional voice lessons, but when you grow up with my grandparents and my mom and they all have classical training, you get voice lessons by default because they’re all classically trained.

Melissa Parker (Smashing Interviews Magazine): Melissa Etheridge is releasing a cover album of soul songs recorded at Stax Records. Are there any artists today that have that Otis Redding or Sam & Dave sound?

Brian McKnight: Not that I’m aware of. That’s the sad thing about music. When things start being looked at as old fashioned or not in style anymore like that four-letter word “jazz,” people tend to not gravitate toward them. It’s good that Melissa Etheridge would go back and cover those songs because some of the greatest songs ever written in the American Songbook are from that era, and they really should not be left alone.

Melissa Parker (Smashing Interviews Magazine): You’ve had many hits, but never received a Grammy. Is that disappointing?

Brian McKnight: No. Not at all. There are lots of ways to answer that. I’m sure that they’re great to have. But, you know how it is in every business where things are political, and the popular thing, which is not always the best thing, gets awards. The only award I’ve ever worked for or wanted really were the ones that were given to me by the fans. So, whether it’s a platinum record or hit songs, those are the ones that last the most.

I know it’s a great thing to be able to say, “Grammy Award winner,” but I don’t let that define my career. I think the charts dictate that, and sales basically dictate that. There’s no way I would let that define me. The best artists don’t necessarily win the awards, at least not the awards that people tend to care about. I mean, it’s a great thing, don’t get me wrong. I would never dis the Grammys. But, I just think that when I walk out of my house and go to my show and people love me, there’s no greater feeling than standing on stage singing a song that you wrote, and the audience is singing that louder than you. That’s the best award I could ever hope for.

Melissa Parker (Smashing Interviews Magazine): You worked with Donald Trump on Celebrity Apprentice. What do you think about him running for president?

Brian McKnight: That’s an entire conversation for another time, but I will say this. I’m not sure if Donald Trump is the answer, but I do think that the departure from traditional politicians may be the answer. I’m not sure if he is, but I like the idea of getting away from career politicians. The problem really to me is that we only have these couple of people to choose from. You have to choose between the lesser of two evils (laughs). That’s the part that gets lost a little in the translation.

Brian McKnight: I’m never off tour. I just take little breaks in between shows. We head to Australia in October, then Europe in November. I’m always writing music. But, right now, I’m riding this wave. We’ll see where that heads toward Christmastime and next year.

Melissa Parker (Smashing Interviews Magazine): What has been your finest hour over this almost 30-year career?

Brian McKnight: You know what? It’s this one. Next year will be the 25th anniversary of my first album. People like yourself still want to talk to me. I think that’s a greater accomplishment than any number one record or platinum album. I didn’t think my career would last this long, and it’s still going. I’m just so glad to still be there, so glad to be doing things on my own terms and still getting it done.