Kelly Overton Interview: "'Van Helsing' Is More like 'The Walking Dead' than 'Buffy'" 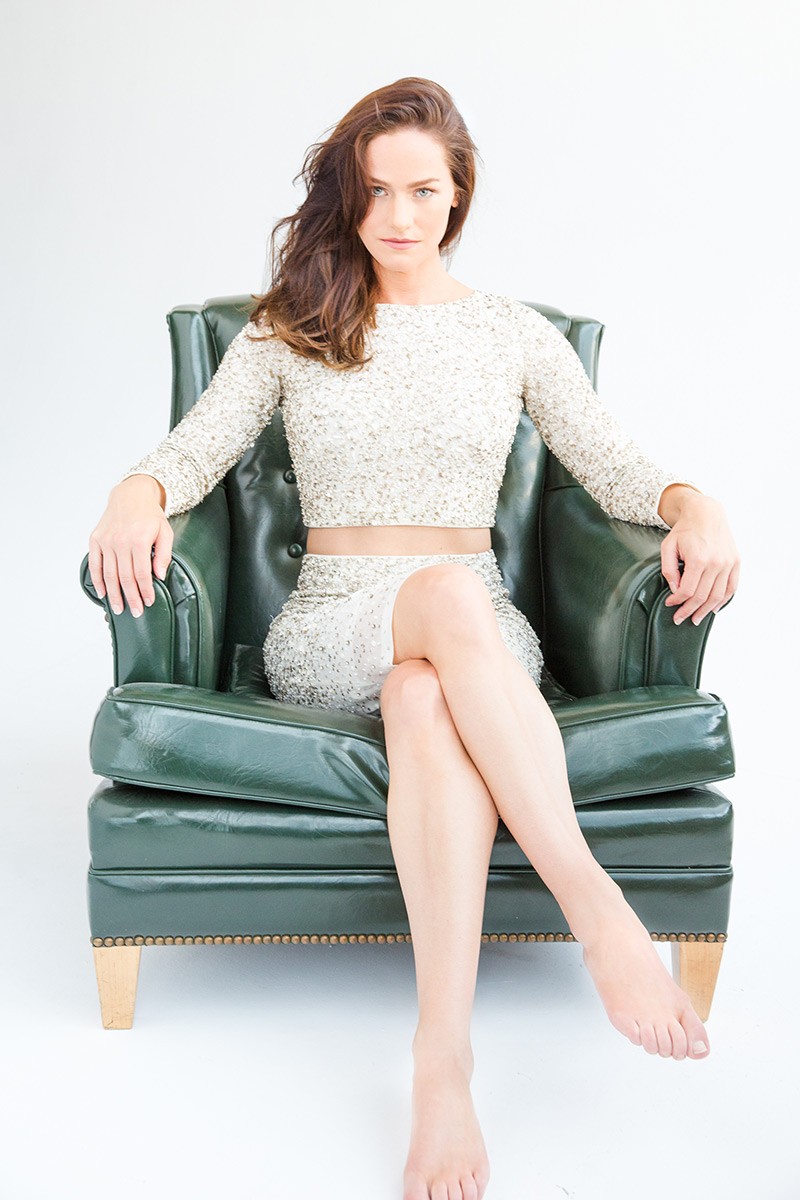 Of Cherokee descent, Kelly Overton grew up in Wilbraham, Massachusetts and studied at the American Academy of Dramatic Arts in New York City. She has performed off-Broadway, in regional Shakespeare and began on television in 2000 on the daytime drama All My Children. Other TV appearances include Legends, Beauty and the Beast, NCIS, Three Rivers, Criminal Minds, The Division and The Practice.

Overton, who starred opposite Joe Manganiello as one of the sexy werewolves on HBO’s True Blood, returns to the world of science fiction as the title character in SyFy’s new series, Van Helsing, which premieres on September 23, 2016. She plays the title character Vanessa Helsing who is a direct descendant of the legendary vampire hunter, Abraham Van Helsing.

"I grew up loving fantasy, as kids do. As far as the vampire genre, it’s not like I’m seeking all fantasy shows or vampire shows. I think there’s something to a supernatural character that fits into the kind of niche that I’ve formed, which is just the athleticism and being a strong female physically. I think that translates to characters with supernatural powers."

Kelly Overton: It is, yes. I’ve done some pilots before where I was the lead, but they, for one reason or another, did not end up making it on air as a full pickup. So, yeah, I’ve been the female lead in pilots, but this is the first one to go on air.

Melissa Parker (Smashing Interviews Magazine): What interested you about this particular project?

I love making choices based on that, so that excited me. I knew it was going to be a job that helped me be healthier. I love it. I love when I have to push myself physically. In order to do that, you have to eat better. All of that for me, personally, just makes my life better.

Kelly Overton: Vanessa is a very interesting lady (laughs). She’s a single mom. When we meet Vanessa, she has been in a coma for three years, and she wakes up to find the world is not the way she remembers. It’s a post-apocalyptic world run by vampires. She realizes that she has these supernatural powers. She wakes up to that, and she really goes on a journey of self-discovery. She discovers that the vampires want her for their own reasons and that the humans also want her for different reasons. She really just wakes up in a world of survival and is trying to understand who she is and what paths she will take.

Kelly Overton: (laughs) I made sure of that. Yeah. There are a lot of wonderful fight scenes. There’s a lot of exploration of her strength and lots and lots of blood.

Melissa Parker (Smashing Interviews Magazine): You did some of these stunts yourself?

Kelly Overton: Absolutely. I always try to do some. I grew up being an athlete, so like I said before, that was one of the things that really interested me in the part. I’m trying to stay fit, and that’s become a pretty good part of my career and in the girls that I play, just needing to be physical. I love to do as many stunts as possible.

Melissa Parker (Smashing Interviews Magazine): Some critics are calling Van Helsing just another Buffy the Vampire Slayer. What are the differences between the two shows?

Kelly Overton: They’re both female leads who have been called to fight vampires. That’s where the comparison to Buffy the Vampire Slayer comes from. And, of course, we’re killing vampires. Other than that, I think that’s pretty much where the similarities end. This show’s tone is completely different than Buffy the Vampire Slayer. You have Neil LaBute as the creator who comes from a playwright background and just has this special talent for writing these deep, complex psychologically dark characters.

Van Helsing is not light. It’s not popcorn or easy entertainment like Buffy was. It’s very dark. It’s very complex. From the writing to the way it’s shot, the show is definitely its own thing. Van Helsing is more like The Walking Dead than Buffy by a long shot.

Kelly Overton: Thank you. Campy. Yeah. I was trying to find a word that was not insulting because some people have negative connotations of “campy.” There’s a place for that, and no judgment for that kind of entertainment. I do struggle to find a word that isn’t putting down Buffy the Vampire Slayer because that was a great show for many reasons.

Melissa Parker (Smashing Interviews Magazine): You did some episodes of True Blood. Are you a particular fan of that genre?

Kelly Overton: I do love fantasy. I grew up loving fantasy, as kids do. As far as the vampire genre, it’s not like I’m seeking all fantasy shows or vampire shows. I think there’s something to a supernatural character that fits into the kind of niche that I’ve formed, which is just the athleticism and being a strong female physically. I think that translates to characters with supernatural powers.

Melissa Parker (Smashing Interviews Magazine): Are you a fan of author Anne Rice’s books on vampires?

Kelly Overton: She was such a part of my young adulthood! I loved Anne Rice. I would go to the graveyard and recite her. I adored her. I met her once at a book signing. I just really thought she was so special.

Kelly Overton: Yes and no. It wasn’t something that I always had a passion for, you know? I’d watch The Karate Kid, and I loved to pretend because I had a really big imagination. I’d go and act out the film myself. I’d play cloak and dagger with my friends. I think it was that make believe, the pretend part for me that I found a lot of enjoyment in. But, I was always athletic. I was always playing sports, so that was something that was more tangible.

I loved playing sports. I think it’s so good for kids on so many levels. It’s important to understand teamwork, and I really just loved it. The acting was always just a form of play. It wasn’t something that was really accessible for me to pursue. Then in high school, I realized, “Hey wait! This is actually something I can do.” I started getting involved in it in high school.

Melissa Parker (Smashing Interviews Magazine): Your television debut was a role in the soap All My Children. How did you find the fast-paced experience?

Kelly Overton: My first TV appearance was actually as a Fox Kids news anchor to set the record straight on that (laughs). I was a Fox Kids new anchor back in the day delivering important news to children. That was really fun even using a teleprompter. Out of college, I got one of my first paid acting jobs on All My Children. It was great and so fun! We had some on-camera classes in theatre school, but not many. Mainly, we were studying theatre. That was very different getting the lines last minute and everything being shot on the fly.

It was pretty exhilarating for me actually because it was something really new that I hadn’t done before. I found a lot of enjoyment in it and actually met some of my really good friends during that experience who are still my friends today. I remember those years fondly. It was just a special time. The people involved with All My Children were so hard-working, just great people to be around for an 18-year-old just starting out.

Melissa Parker (Smashing Interviews Magazine): Does your five-year-old daughter know what you do for a living?

Kelly Overton: To some degree. She knows that I’m an actress, but she doesn’t totally know what that means, so just to some degree on the very surface level.

Melissa Parker (Smashing Interviews Magazine): What fills your time when you’re not working?

Kelly Overton: Being with her (laughs). The job is very time consuming. The hours are very long. I think any working mother can relate. That’s always a bit of a struggle. So, when I’m not working, and I do have the opportunity, I want to be with her and soaking up every second.

Melissa Parker (Smashing Interviews Magazine): What else is coming up?

Kelly Overton: I’m not pursuing anything else right now. I’m just enjoying being home with my daughter. But, I started a jewelry company about a year ago called Benevolence LA. The whole idea is that it’s charity based.

The jewelry represents the charity we’re currently working with which is called Hands 4 Others, and they help build stable water systems in parts of the world that don’t have clean water, that don’t have access to clean water. We just funded our third village. It’s very exciting and something I’m passionate about.