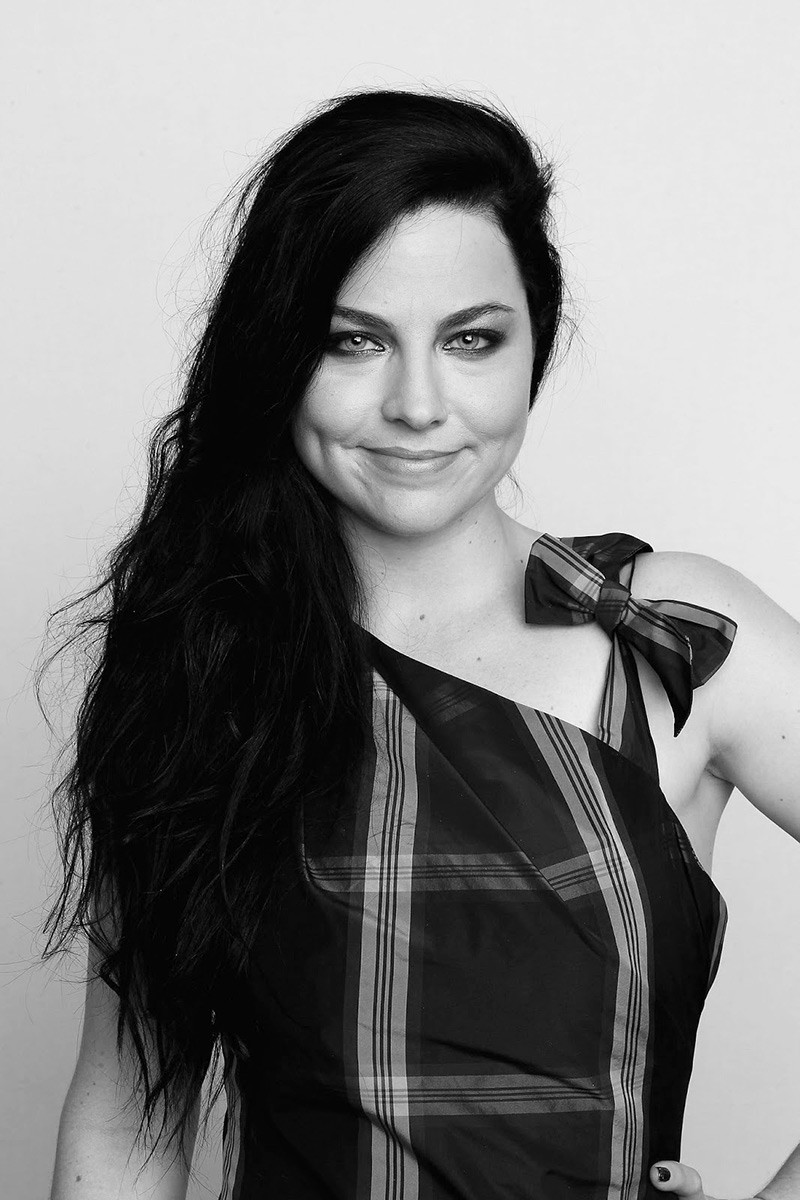 Evanescence frontwoman Amy Lee’s new single “Speak to Me” is the end title theme from the suspense/drama film Voice from the Stone, which will be released April 28, 2017, in limited theaters and VOD everywhere. The haunting thriller set in 1950s Tuscany stars Emilia Clarke, Marton Csokas and Caterina Murino. “Speak to Me” is available for download on iTunes, Amazon and Google Play, and streaming on Spotify, Apple Music and Amazon Music Unlimited.

Rock band Evanescence is known for hits “Bring Me to Life,” “Call Me When You’re Sober” and “My Immortal.” Their self-titled third studio album, released in 2011, debuted at No. 1 on the Billboard 200 chart and four other Billboard charts. In addition to composing music for films, Lee has released several solo projects, the most recent being Dream Too Much, a children’s album in 2016, and a single called "Love Exists," which came out earlier in 2017.

"People just started telling me that I had a beautiful voice, and I felt really shy about it in the beginning. Playing our first concert was really difficult for me. It was really hard to open my eyes. I was very, very shy. But the more confidence I built, the better I got at it, if that makes sense. You’ve got to get comfortable and say, 'Okay. I’m a singer.'”

Smashing Interviews Magazine: Amy, “Speak to Me” is absolutely beautiful. How did you become involved in composing music for the film Voice from the Stone?

Amy Lee: The director, Eric Howell, reached out to me, tracked me down and just had a vision creatively about me making a song for his film, which is hugely flattering in the first place. To start off, he wanted me to watch the film. I think it has been about a year and a half now since we finished that part of it. But I watched the film and instantly was so inspired and so moved. I cried. It’s like this film has no genre. It’s not just a horror movie. It’s not just a romance movie. It’s a drama. It’s beautiful. It’s like life. It has a little bit of everything.

Smashing Interviews Magazine: So, how did it inspire you?

Amy Lee: It definitely really spoke to me specifically because I was a new mother, and the really big scene in the movie to me is about this very strong love between a mother and son. It exists and is so strong that it conquers death. I was a new mother myself when I’d first seen the film. I actually had never been apart from Jack before. He was 13 months old at the time, and he’s my first and only. So, just seeing those feelings as a new mother was way more extreme for me.

I was more sensitive to all the content, and also I just thought that it was a very beautifully done film. I was super inspired right away to write music for it. So, I spoke to the director and also the film’s score composer, Michael Wandmacher, on the phone right after watching it, and we just had this really good conversation and were absolutely on the same page creatively. I knew right away that we were gelling creatively.

Smashing Interviews Magazine: Tell me about the writing process.

Amy Lee: I got off the phone and immediately came up with the initial idea for the first part of the song. I showed it to them probably the next day or the day after. It was this really rough demo. They loved it, so they told me they were actually out at Skywalker Ranch in California doing the editing of the audio and all the mastering for the film.

Skywalker Ranch is this legendary place that I’d never been to before. They said, “You should come out, finish the song and record it here while we’re still here this weekend.” I’d never been away from Jack, but I knew I had to go on my own for that, but I really had to think about it. I’m so glad I made the decision I did. It put me in the exact, perfect emotional state of just being strong. But also, there was this separation between me and Jack for the first time and going out to this beautiful, creative place in nature with the most amazing studio you’ve ever seen at your fingertips.

The whole crew worked together and really clicked, so I finished writing the song out there at Skywalker. I would wander down the hall at times and peek at them working on the film on the big screen and get inspired by that and go back to the piano. It’s usually never like that, especially in the rock world. Not that we haven’t had beautiful, wonderful, first-class experiences. We have. But there are plenty of times where you feel like all you need is just a clean pair of socks, and you do whatever you can to make it work with a small budget a lot of the time (laughs). This was a beautiful experience that I’ll never forget.

Smashing Interviews Magazine: Is there a chance that “Speak to Me” and your other new single, “Love Exists,” will be on a future solo album?

Amy Lee: You know, I have been focusing on looking at these solo projects that I’ve done. It’s sort of like a really cool outlet to be able to release things in a different way. I’ve always made albums. Making an Evanescence album is this big, giant, sometimes very daunting thing. It’s awesome. There are a lot of elements involved and it takes a long time.

It’s really nice and freeing for me to do something in a different way, to be able to just focus on one piece of music and put it out and move on to the next thing. I feel like it’s really nice for me to see my solo stuff, to some degree, as an outlet and to be able to use it as something where I can be sporadic and just focus on one song at a time and let them have their own lives. It just feels really freeing. It’s very satisfying to be able to have an idea, write it and put it out and move on.

There are times in every elaborate project (which I’m quite familiar with) where you get to a point and you start feeling like, “Oh, man! I’m right in the middle of this, and I just can’t even see the ending of getting there. There’s so much work to do.” I think there’s nothing like a side project outlet to get your creative juices flowing in a different way where you can come back and have a clear head. I’m not planning on putting a solo album out at this point. It’s not that I never will. But I’m enjoying having these sort of separate moments.

Amy Lee: I’m working on a big, elaborate Evanescence project, too, meanwhile. So, I’m still making albums, but it’s nice to kind of stretch out a little bit.

Smashing Interviews Magazine: Will an Evanescence album be out this year?

Amy Lee: Yes. We’re going to be releasing something new this year. It’s not a straight-up, traditional Evanescence album. I’m waiting just for a little bit longer before explaining or announcing what it is. But it’s very involved and very unique and something very different. I’m very excited about it. It’s one of those very deeply involved projects, so I’ve been working on that every day for a few months now.

Smashing Interviews Magazine: Has your son, Jack, shown any interest yet in music?

Amy Lee: Oh, my God! He loves the drums. He’s just obsessed with the drums. He’s come to band rehearsal a couple of times and just has to get behind the drum set. It’s a loud noise! (laughs) Just over Christmas, Jack started singing, and it is so funny (laughs). It’s really cute. His first song was “Frosty the Snowman,” and he’s still singing it. He’s just singing all the time. Christmas is not over at our house (laughs).

Smashing Interviews Magazine: I read that you became a fan of Anne Rice while reading Interview with the Vampire in the early 90s. Has she been an influence on your music?

Amy Lee: Wow, yeah! Completely. I read some of her books when I was younger. It was just the beautiful, somewhat supernatural romance of it all, and honestly, all those words apply to this film and to “Speak to Me.” It’s just something that’s a little bit different, a little bit darker and a little bit deeper. Anybody that is coming from the perspective of a strong, female creative force, I naturally feel very drawn to. I just realized this recently that almost all the music I listen to are female artists (laughs). I just feel a really cool, incredible connection there.

Smashing Interviews Magazine: Have you ever thought about writing for Tim Burton? I think you’d be a perfect choice to compose music for one of his films.

Amy Lee: He’s been one of my biggest inspirations since I was very young! Somebody, please bang down a door and beg him to let me do a score for one of his films. Please! I’m going to do that.

Smashing Interviews Magazine: When did you realize you had such a special voice, Amy?

The singing part didn’t start coming until later when I was a teenager. I also got into writing poetry and just putting words onto the music I was making, and singing was just a way to facilitate that. It wasn’t that I thought I was a great singer, and obviously you’re not a great singer when you first open your mouth. I mean, it’s something that does get better when you work on it.

People just started telling me that I had a beautiful voice, and I felt really shy about it in the beginning. Playing our first concert was really difficult for me. It was really hard to open my eyes. I was very, very shy. But the more confidence I built, the better I got at it, if that makes sense. You’ve got to get comfortable and say, “Okay. I’m a singer.”

It’s funny because it’s always been a little bit of a struggle for me that that is the thing everybody focuses on the most when they think of me or do an interview with me, that I’m a singer. I’m so proud to be a singer. That’s such a cool thing. People hearing my voice and connecting to it is so beautiful. But it’s hard for me because I feel like there’s a lot more work that I do as a musician that gets looked over that is actually much harder for me (laughs).

It takes a lot more work to become a great writer and a great piano player in a lot of ways than to just open your mouth and sing. Not that it’s not more than that. It’s hard and trust me, I make these songs with Evanescence so, so hard for myself it’s just ridiculous. One day I’m going to learn to make it easy.

Smashing Interviews Magazine: Well, if it’s any consolation, it certainly comes across as easy and effortless.

Amy Lee: Thank you. That’s the best compliment of all.

« Tom Clavin Interview: Bestselling Author Demythologizes the Legendary Figures of Dodge City
J Sutta Interview: "If I Were to Do a Pussycat Dolls Reunion, It Would Be for the Fans" »