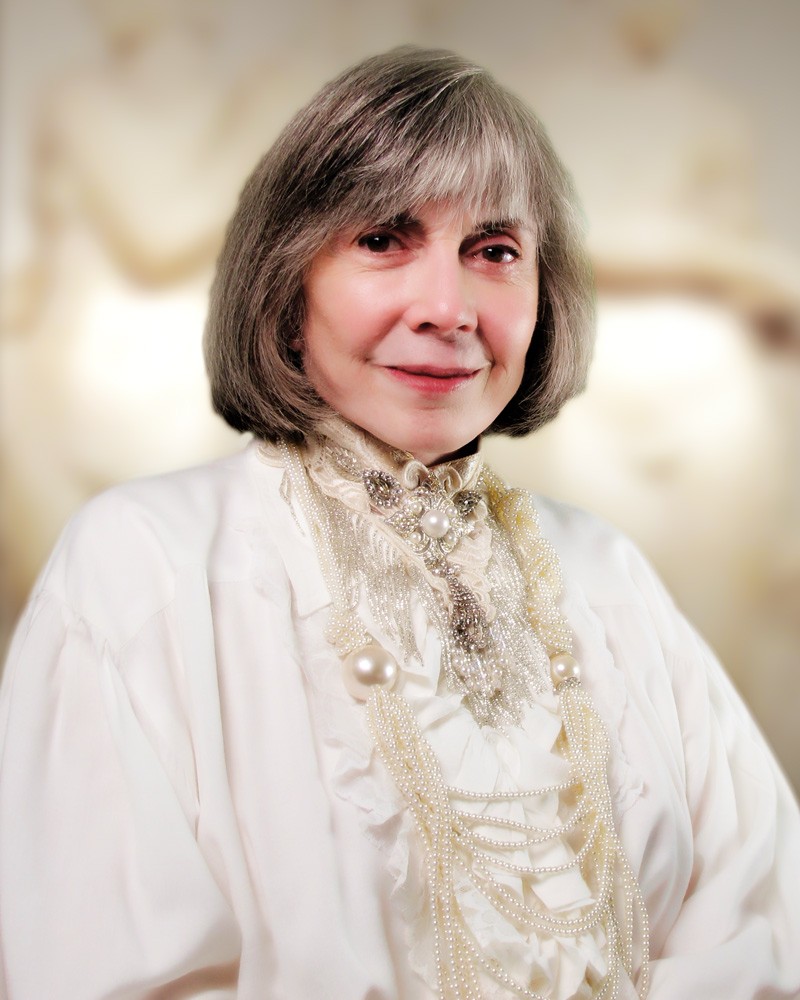 New Orleans native Anne Rice is best known for her popular series of novels, The Vampire Chronicles, that revolve around the central character of Lestat. Two film adaptations, Interview with the Vampire (1994) and Queen of the Damned (2002) were based upon those books.

"Well, it was meant to be a Christmas book. That’s really what it was all about. I was inspired by seeing … I was a Downton Abbey fan. They did Christmas at Downton Abbey, and I thought, 'I want to do that! I want to do Christmas with the werewolf.' And really, that’s what inspired it. So it’s not really a great advancement forward in a series so much as it’s the first Christmas at Nideck Point for Reuben and his family and friends."

The Wolves of Midwinter is the author’s second novel and sequel to The Wolf Gift and part of a werewolf series set in Northern California in the present time. It was published October 15, 2013. In these books (The Wolf Gift Chronicles), Rice returns to the classic monsters and themes of supernatural literature, similar to those she explored in her Vampire Chronicles and tales of the Mayfair Witches.

Rice’s books have sold over 100 million copies, placing her among the most popular authors in recent American history. She currently lives in Palm Desert, California, and has a son, Christopher who not only has written five bestselling novels but just recently authored The Heavens Rise which was published on the same day as The Wolves of Midwinter.

Melissa Parker (Smashing Interviews Magazine): Since you two have been touring together, has anyone been dressed as werewolves or vampires in the book signing lines?

Anne Rice: No (laughs). Perhaps closer to Halloween. But I’ve seen some great tattoos, some absolutely fabulous tattoos. My readers have always been deep into tattooing. One girl showed up last night, and she had wonderful white makeup on her face, and she was adorable.

Melissa Parker (Smashing Interviews Magazine): I asked Chris about his writing process, and he has now moved to a laptop. What is your routine?

Anne Rice: I’m not as flexible as he is. I pretty much have to be in my office at home on my big computer. I need my Logitech keyboard, my comfortable chair and my coffee. I need that big monitor. I have a big 30” in front me, and I have two 30” monitors, one on each side of that. When I get behind all that, I’m in command central, and I can really write for hours at a time. But I don’t do much out in the real world, not with laptops and so forth.

Melissa Parker (Smashing Interviews Magazine): Is there always a worry that a sequel won’t be as successful as the previous book?

Anne Rice: You know, I suppose so. But I don’t usually feel it. I can’t say that I do. What I feel is sort of an insuppressible desire to continue with the characters. Maybe some authors feel that. I’m kind of like a pot boiling over all the time. If I’m not boiling over, I just don’t write it.

Melissa Parker (Smashing Interviews Magazine): When we spoke a few years ago, you said that you decided on vampires thinking that it would just be neat to write about their lives and loves. Was that the same reason you chose the topic of werewolves?

Anne Rice: Yeah it was. It really was. I know enough about myself to know that I love the old black and white film monsters, the mummy and the vampires. I’d certainly seen the wolfman movies with Lon Chaney, Jr. running around in that great dark shirt and pair of pants.

Melissa Parker (Smashing Interviews Magazine): Don’t know why, but my mind automatically wanders back to Michael Landon in the 50s film I Was a Teenage Werewolf.

Anne Rice: I haven’t seen that one, but I want to see it. I saw the other teen werewolf with Michael J. Fox. But I need to find the one with Michael Landon.

Melissa Parker (Smashing Interviews Magazine): Would you say that The Wolves of Midwinter has more romance and less action than The Wolf Gift?

Anne Rice: Well, it was meant to be a Christmas book. That’s really what it was all about. I was inspired by seeing … I was a Downton Abbey fan. They did Christmas at Downton Abbey, and I thought, “I want to do that! I want to do Christmas with the werewolf.” And really, that’s what inspired it. So it’s not really a great advancement forward in a series so much as it’s the first Christmas at Nideck Point for Reuben and his family and friends.

It really is all about Christmas, the customs of Christmas, midwinter and Yule and the ghost stories associated with Christmas. For me, Christmas is just a haunting feast day with ancient roots in northern Europe. I wanted to explore all that and how the werewolves have their secret celebration and yet gave this great big Christmas feast for the human beings. That was more my focus than anything else. Of course, as Reuben goes along and does his big Christmas thing with Felix and the others, he gets more deeply involved with his family, and his family gets more deeply involved with his secrets … like it or not.

Melissa Parker (Smashing Interviews Magazine): Is Christmas your favorite holiday or is it Halloween?

Anne Rice: I love both Christmas and Halloween, and I love their ancient roots. I love the fact that in ancient Christmas customs, people thought the dead would come out at midwinter. The same thing with Halloween. I love that. I think they’re connected in a way. For me, they are family times. Not so much Halloween anymore because we do things for the kids. We give out candy. But at Christmas, we all get together. The family gets together without fail.

Melissa Parker (Smashing Interviews Magazine): You basically started the vampire craze. Do you think this book series will begin a werewolf craze?

Melissa Parker (Smashing Interviews Magazine): Yes, I believe most of those werewolves are four-footed and eat everything in sight (laughs). Have you thought about doing a crossover book where the vampire Lestat could meet the werewolf Reuben?

I like those books, and I’m proud of them, and I’m thrilled when people talk about them, but I’m not sure I want to do more crossover. The only thing is the Talamasca Caste, my psychic detectives. I do like for them to turn up in everything, and they’ll likely turn up soon in the werewolf books.

Melissa Parker (Smashing Interviews Magazine): Did you work with singer-songwriter Mary Fahl on the theme song for the audiobook version of The Wolves of Midwinter?

Anne Rice: She did it on her own (laughs). I happened to mention a Mary Fahl song in the novel. There’s a point where Reuben is being haunted by the ghost of Marchent, this woman who died in the house, and he hears Mary Fahl on the radio coming out of Marchent’s room, and he knows it and recognizes it as October Project, Mary’s old band, and it’s a song called “Take Me As I Am.”

I put that song in there because I thought it was a very haunting song. Just about that time, I happened to make contact with Mary. I just mentioned to her publicist that I had mentioned her in the novel. Mary was inspired to read The Wolves of Midwinter, and she wrote her song “Exiles” based on it. I was completely honored. I was thrilled.

Anne Rice: Well, I never lived in that house. The one they call the Anne Rice house is at 1239 First Street in New Orleans, and it’s very, very different. But I did own that house and did refurbish and renovate it. While I was doing that, some members of my family, my aunt and my sister, lived there. But I never lived there, and as far as I know, it’s not haunted.

I did describe that house in The Witching Hour novels. I gave it to a branch of the family, the Mayfair family, and a little witch called Mona Mayfair lived in that house. She becomes a big character in the book, but I never lived there. It’s just one of several buildings and houses that I owned.

Melissa Parker (Smashing interviews Magazine): Would you like to return to New Orleans to live?

Anne Rice: I’d love to, but it doesn’t look like it’s going to happen anytime in the near future. I’d love to get an apartment in the Quarter where I could come back now and again.

Melissa Parker (Smashing Interviews Magazine): I read that CBS would be adapting your novel Angel Time into a television series.

Anne Rice: Right. The pilot script is being written. It’s a great team of people who are doing it. Carl Beverly is the producer, and he and his team do incredible shows. They do Elementary and Justified. I’m a huge fan of their shows. This is the best team I’ve ever had developing something based on my work for TV. I think we really have a shot this time. I’m excited.

Anne Rice: I’m not sure what I’m going to do next. I’m toying with a lot of ideas. It’s just too soon to say. I definitely want to do a book three for Reuben and the wolves. I’ve got some ideas, and I’m seeing a big action packed real advancement of the plot. Now that we have Christmas finished, we can move on with the plot (laughs).

Melissa Parker (Smashing Interviews Magazine): Are you always delivered to the annual Lestat Ball in a coffin?

Anne Rice: (laughs) Oh no. I usually go just to see the kids. People come to that Ball from all over the world, and they dress in fabulous costumes. It has been years since I’ve been able to attend. Was so extremely excited about seeing everyone. I just show up and greet everybody, stay for a while, and then I cut out. It’s great. The book signing in New Orleans at Garden District Book Shop in my old neighborhood store was great.

Melissa Parker (Smashing Interviews Magazine): What did Chris say after he read The Wolves of Midwinter?

Anne Rice: Well, I think he liked it and enjoyed it. He was pretty hard at work on his own book (laughs). I don’t want to impose on him too much. We writers have to respect each other’s space mentality and so forth.