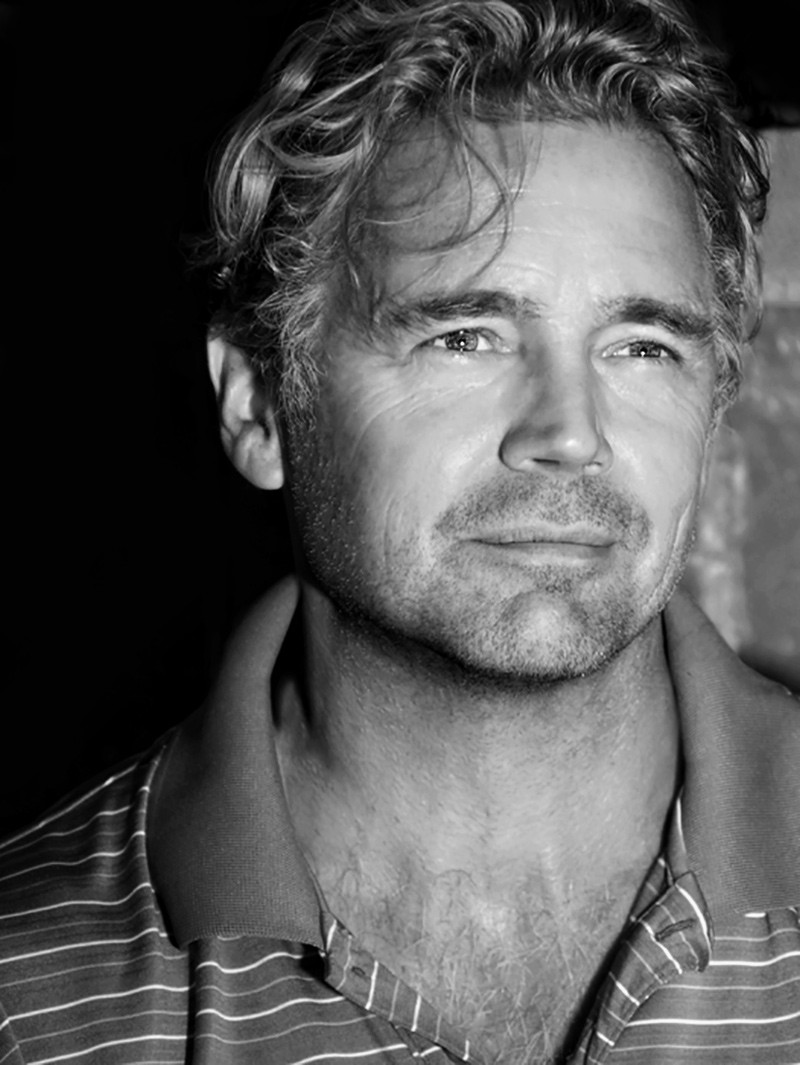 John Richard Schneider’s show business career began in 1978, at the age of 18, when he auditioned and won the role of Bo Duke in the CBS television series The Dukes of Hazzard. During this time, he starred in two made-for-TV movies, recorded four albums, starred in the film Eddie Macon’s Run and filmed two TV specials. In 1983, Schneider and Marie Osmond co-founded the Children’s Miracle Network, a charity which would raise billions of dollars for children’s hospitals throughout the US and Canada.

After The Dukes of Hazzard was cancelled in 1985, Schneider continued acting and singing. His four singles, “I’ve Been Around Enough to Know,” “Country Girls,” “What’s a Memory Like You” and “You’re the Last Thing I Needed Tonight,” along with his album A Memory Like You, all hit #1 on the US Country charts.

"Johnny [Cash] was the first man I saw who could profess his faith in Jesus Christ and keep his masculinity. I think it was because he never forgot what it was like to not be a believer. I saw in him the kind of Christian I wanted to be."

During the 1990s, Schneider’s career alternated between TV movies and musicals. He co-starred as Hardball in the television series Grand Slam and from there went to Broadway to appear in Grand Hotel and Brigadoon. Other TV appearances included Burke’s Law, JAG, Christy, Dr. Quinn: Medicine Woman and Walker, Texas Ranger.

It was in 2001 in which Schneider’s fans saw him star as Jonathan Kent (Superman’s earthly dad) in the TV series Smallville. In 2008, he appeared in The Secret Life of the American Teenager and the next year filmed the movies Set Apart, H20 Extreme, Come Dance at My Wedding and The Rebound. More movies were filmed the next couple of years, and on television, Schneider appeared in Leverage, 90210, Desperate Housewives, Hot in Cleveland, Happily Divorced, Working Class, Glee, Mistresses and The Haves and the Have Nots.

Recent films include Super Shark, October Baby and Season of Miracles. Doonby, a modern take on It’s a Wonderful Life, releases November 1, 2013 in theaters nationwide and video on demand through Warner Bros. Digital. In addition to Schneider, the film stars Will Wallace, Jennifer O'Neill, Robert Davi, Ernie Hudson, Joe Estevez and Jenn Gotzon. Smothered, the first movie to come out of his production company, Fairlight Films, is currently in post-production. He and wife Elly have three children.

Melissa Parker (Smashing Interviews Magazine): John, thanks for taking the time today! Let’s talk about Doonby for a few minutes. Why did you become involved in the film?

John Schneider: I was very impressed with Peter Mackenzie’s passion for the project. I also liked the idea of the drifter who comes in to town, and even though he tries to do the right thing and make it a better place, he causes ripples in the community that have severe implications on the status quo. I also liked the mysterious part of who Sam is.

Melissa Parker (Smashing Interviews Magazine): He does cause quite a stir! What message would you like the audience to come away with after viewing the film?

John Schneider: That all life matters. All of us are important. We all have impact for better or worse on everyone around us.

Melissa Parker (Smashing Interviews Magazine): Of course, one doesn't realize until the last 20 minutes or so that this is a pro-life film. The physician who “aborted” Sam was named Cyrus Reaper as in “Grim Reaper.” Was that the film’s nod to abortion doctors as being totally uncaring about the welfare of the mother and unborn child?

John Schneider: That’s part of the puzzle that is up to interpretation. Doonby never tells you how to think. It only offers up situations and possibilities for the audiences to take a look at.

Melissa Parker (Smashing Interviews Magazine): Yes. It’s a very interesting film. You lived with Johnny and June Carter Cash for a short time. What did Johnny have to do with you becoming a Christian?

John Schneider: Johnny was the first man I saw who could profess his faith in Jesus Christ and keep his masculinity. I think it was because he never forgot what it was like to not be a believer. I saw in him the kind of Christian I wanted to be.

Melissa Parker (Smashing Interviews Magazine): Millions of people know you as “Bo Duke” from The Dukes of Hazzard that ran on CBS from 1979 until 1985. You lied to producers about your age and ethnicity. Tell me that story.

John Schneider: I did lie (laughs). They wanted people from farms in Georgia between the ages of 24 and 30 who were not actors. I was an actor from New York State who was 18. I walked in with a 6 pack of beer, offered the director one and popped my own open right there in the room.

I later learned that one of the producers knew I was the right guy from the moment I walked in, but the other one took an “over my dead body” position (laughs). He hated me. Obviously and thankfully, the other guy was the senior producer, so after about 6 weeks, he won and I got the part. Tom (Wopat) and I hit it off right away, and we are still great friends to this day.

Melissa Parker (Smashing Interviews Magazine): You were 18 years old on a hit show and faced with all of the temptations Hollywood has to offer. How did you handle it at such a young age, and were you a Christian at that time?

John Schneider: I was not a Christian at the time and gave in to every temptation that was out there. One good thing for me, though, was that drugs have never been a temptation at all. I went more for the women and fast cars. Dukes was a 10 month a year, 12 hours a day, 5 days a week job, and there wasn’t a lot of time to get into too much trouble. I also have always had a very strong work ethic.

Melissa Parker (Smashing Interviews Magazine): How many stunts on the show were performed by you and Tom?

John Schneider: I did about 60% of the driving but no jumps. We did lots of the sliding around in the dirt and in the square, but the serious stuff was up to the professionals. Very dangerous stuff there. Tom and I did most of all our fighting ourselves unless the fights were high up or in the water. I can’t stand heights, and Tom can’t swim. He did the high up stuff, and I got in the water (laughs).

John Schneider: I am recognized by many different characters, and the person’s age usually determines which show they will quote. With The Haves and the Have Nots on OWN now, I am getting most of my “spottings” based on that show. I enjoy the recognition regardless of what comes after, “Hey, you’re John Schneider from …”

Melissa Parker (Smashing Interviews Magazine): Why will the movies that will be generated by Fairlight Films be so special?

John Schneider: I am told that I have a heart for the disenfranchised, and I suppose that’s true. The movies we do will all feature folks who are terminally ill or down on their luck. They live in houses that would get new paint if they could afford it and work in neighborhoods where many of the buildings are either boarded up or “for sale by owner.” These are the things I see mostly in society when I go out. It’s real life.

The people in these films tend to do extraordinary things. They have the courage to face their situations and their failures. They don’t run from life because they are beaten up by it. They run toward trouble and choose to take it by the horns. I like people like that and hope that I am actually one.

Melissa Parker (Smashing Interviews Magazine): I must admit that I’ve enjoyed more independent films in the past couple of years than Hollywood films. In your opinion, are indie films just better at telling stories?

John Schneider: Indie films are almost always the result of someone’s dream … someone’s passion that is shared and “caught” by others. They are birthed from inspiration, and it shows. Studio films are deals that are made where the byproduct is the film, a totally different dynamic. One has passion written all over it, and the other has little to do with passion at all.

Melissa Parker (Smashing Interviews Magazine): Tell me about your film Smothered, and what makes it so scary.

John Schneider: The scariest thing about Smothered is that all of the things that happen in it that are disturbing could actually happen. There are no phony monsters or haunted houses to be afraid of. Be afraid of those things that people can do to you that will hurt, that will cause anxiety, pain … death. These things also happen to people that the audience will, hopefully, identify with and actually like.

Too many times I’ve been in a horror film where I didn’t care about anyone who was dying by the hand of the bad guy. I think you have to care in order to be involved. Movies should be a visceral experience, and in order to pull that off, the audience needs to have a connection with the people they are watching. And guess what? All of the characters in Smothered are disenfranchised.

Melissa Parker (Smashing Interviews Magazine): What is your favorite horror film of all time?

John Schneider: I really liked Frankenstein because I felt for the monster. The scene when he is looking at flowers with the little girl just before he turns is my favorite. He’s misunderstood, and there is something happening in him right then and there where his evil brain could actually take a turn for the better. But the townspeople and monster hunters come in and blow it. That’s good storytelling!

Melissa Parker (Smashing Interviews Magazine): I agree. John, what is your favorite Bible verse or saying that most describes your outlook on life?

Melissa Parker (Smashing Interviews Magazine): What career path would you have chosen if you had not been successful as an entertainer?

Melissa Parker (Smashing Interviews Magazine): What is the story behind you and Marie Osmond founding the Children’s Miracle Network organization?

John Schneider: CMN Hospitals came from recognizing a need for funding to help those who help all children regardless of their ailment or their family’s ability to pay the bill. Simple. We saw that these hospitals were amazing places that needed help and used our celebrity to give it to them. To this day, 100% of the money raised by CMN Hospitals in each area stays right there and helps those kids. It is the best thing I have ever been associated with.

Melissa Parker (Smashing Interviews Magazine): What are your upcoming projects?

John Schneider: We start another film in Baton Rouge in January called Useful People. My hope is to stack it full of wonderful older names like Dick Van Dyke and Ed Asner. It’s about a group of terminally ill poker players with a legitimate ax to grind against someone who took a loved one from them years ago and got away with it. The group of older gentlemen gets together once a week and occasionally has one of the offenders taped to a chair in the closet. If you want to know what happens next, you’ll have to come see the movie!