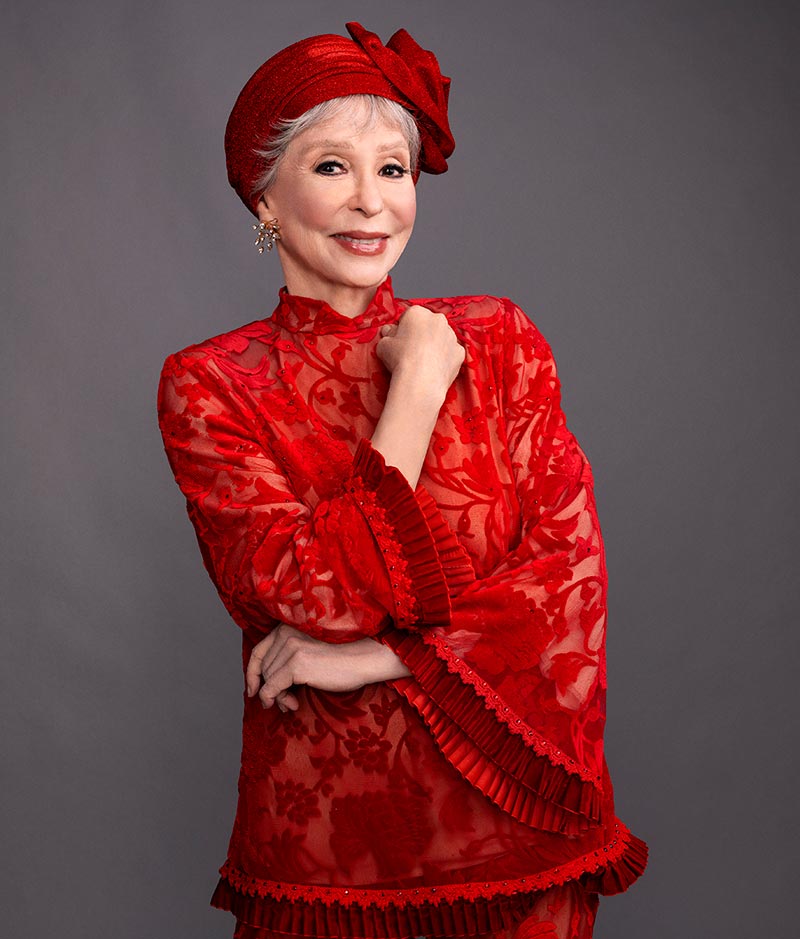 Born on December 11, 1931, in Humacao, Puerto Rico, Rita Moreno has appeared in many film, television and theater projects including Singin’ in the Rain, The King and I and the 1961 and 2021 film adaptations of West Side Story. Other appearances in films are Popi, Carnal Knowledge and Slums of Beverly Hills. She is known for her work on the children’s television series The Electric Company, the HBO series Oz, Jane the Virgin and the revival of Norman Lear’s One Day at a Time.

In 1977, Moreno became the recipient of an EGOT, the achievement of having won all four of the major American entertainment awards (Emmy, Grammy, Oscar and Tony), and she became the first Latina to do so. Santa Bootcamp, directed by Melissa Joan Hart, stars Moreno, Emily Kinney, Justin Gaston and Patrick Cassidy, and the movie premieres Saturday, November 19, 2022, on Lifetime.

"First time with Lifetime and first time with a Christmas movie. I have to tell you, I’m hoping to be asked again next year because I had a great time."

Smashing Interviews Magazine: Rita, how did you become involved in Santa Bootcamp?

Rita Moreno: Oh, that was easy. I was asked, and I read the script. I had never done a Christmas movie, and I just thought, “What a blast this could be!” It turned out absolutely to be great fun. The costumes are wonderful. I know Lifetime has enormous fans. Boy, did I find out about that! People love Lifetime shows. I guess it’s because you can depend on the fact that it’s going to have some kind of a happy ending. Nobody’s going to die or get shot or anything like that. I know that’s why people tune in and boy, do we have a Christmas show for them. It’s wonderful!

Smashing Interviews Magazine: So it was also your first experience with Lifetime?

Rita Moreno: First time with Lifetime and first time with a Christmas movie. I have to tell you, I’m hoping to be asked again next year because I had a great time.

Smashing Interviews Magazine: What did you think about Melissa Joan Hart as a director?

Rita Moreno: Oh, I loved her! I have a crush on her. First of all, she’s a lovely person. Secondly, she’s very, very smart, and she certainly knows how to make movies. I don’t know why I’m astonished. I mean, other actors have done it, so why not she? But she just did beautifully, and we had a really tough time near the end because at the very last day of shooting, we were saving special scenes, and the weather was supposed to be terrific. Instead, it was not only rain, there was lightning and thunder, and our scenes were outside.

So what can I tell you? There was a mad rush to find a place inside. I think they found an empty restaurant, took all the chairs out and made a soundstage out of that. It was crazy, and we worked until the sun came out literally. The guy kept saying, “The sun’s going to come up in two minutes! Come on, you’ve got to finish this!” All of this stuff was supposed to be at nighttime. Melissa just really showed her mettle. She just got it done.

Smashing Interviews Magazine: There’s something special about your character, Belle.

Rita Moreno: Where are you from, first of all?

Rita Moreno: Well, I would never have guessed, dear (laughs). (In southern accent) Belle? I love Belle. I should’ve made everybody in the movie call me Belle.

Rita Moreno: What’s fun about Belle is that she’s kind of feisty. She just does things her way, which she feels is the way. I got to be funny in it mostly because Melissa loved it whenever I added something of my own that was humorous. That gave the character more color, I thought. That’s why I say I had such a great time because I was allowed some freedom as an actor to add what I thought were humorous things. I figured if she didn’t like them, she’d just say, “Don’t do that.” But it didn’t happen because she loved all the little things I kept adding, and I was thrilled to death about that.

Smashing Interviews Magazine: There were also two deaf actors in the movie, and I applaud Lifetime for their inclusivity.

Rita Moreno: Absolutely thrilling! What no one seems to know, I’m going to mention it. The woman who played the leading lady’s mother is an actress. She uses the language, as she doesn’t hear. But she’s also the wife of the fellow who did the film CODA. She’s the wife of the leading man in that film, the one who did all those hilarious things about sex with his finger and hands. Wasn’t he delicious in that film? I loved him. Anyway, that is his wife.

You know, I give all credit to Emily, our leading lady, because she really learned how to do sign language. Sign language is extremely difficult because it’s so subtle. She says that everybody has their own personality when they do sign language. They change the movements sometimes to suit them. It’s not necessarily by the code. So I thought Emily was just fabulous at that.

Rita Moreno: Some people can’t explain the word EGOT. You go ahead. You do it.

Rita Moreno: Right. A lot of people can’t do that.

Smashing Interviews Magazine: The official number of EGOT winners is 17, and only five are women. So I’d like to thank you for helping to open the doors for women and persons of color in the entertainment industry.

Smashing Interviews Magazine: Thank you. You and George Chakiris were both nominated in the Best Supporting category for West Side Story, and I heard that neither of you thought you'd win the Oscar.

Rita Moreno: We really didn’t, especially me, mostly because at the time, Judy Garland was up for an Oscar also. She was nominated for playing a dramatic role in a film called Judgment at Nuremberg. I thought that there were so many special things about that performance that I didn’t think I stood a chance. I can tell you that I did fly in from Manila in the Philippines just in case. I thought, “If, if, if, I want to be there.” Then I made the shortest acceptance speech in Oscar history because I was so surprised (laughs). I was so surprised to have won.

Smashing Interviews Magazine: Did winning the Oscar bring you more roles that you wanted?

Rita Moreno: Oh, hell no! It was the opposite. It’s as though that movie solidified my image in the minds of people in the business, in my profession, who were in the position of casting actors. I couldn’t get a job to save my life! It was astonishing. I was offered a couple of movies about gangs. You know, I wasn’t going to do that because I would really have been stuck in this awful morass. I had a very hard time trying to get back to work after I won the Oscar and the Golden Globe, which at the time, had some respect.

Smashing Interviews Magazine: Your mother took you to New York when you were five years old. As a child, did you want to be a dancer?

Rita Moreno: From the very, very beginning. When I was in Puerto Rico, I used to dance for Grandpa. He’d put on a record, and I’d wiggle my little behind. He just thought it was charming and adorable and would applaud and praise me. I remember thinking, “This is nice. I like this kind of attention.” So you could almost say that I was wired to be in this business from the time I was five.

Smashing Interviews Magazine: Did you have someone you may have called a mentor to give you advice in the early stages of your career?

Rita Moreno: Mentors didn’t help little Puerto Rican girls. It just didn’t work that way. I remember talking to Jessica Chastain one day. We were on an interview with each other, and she said, “Do you find it hard to do love scenes?” I said to her, “I have the dreariest news for you. Island girls never have love scenes. Island girls, which were the parts I was always playing, either got raped or were oversexed, but they never had love scenes.” Jessica said, “Oh, my God. That never occurred to me.” And it’s true. We were on a very special kind of level.

Smashing Interviews Magazine: Are Latinos much better represented now in the entertainment industry?

Rita Moreno: It’s definitely better. Better is not good enough as far as I’m concerned and as far as the Hispanic community is concerned. I think we’re still seriously underrepresented, and I really rack my brain to understand why that is. The Black community, to their credit, have done an incredible job in promoting themselves, as it should be! Somehow we’ve never gotten that far. I don’t understand it. Someone suggested recently to me, and it may be the answer, that the Hispanic community is different in the sense that we’re from different countries. We’re from Mexico. We’re from Puerto Rico. We’re from Cuba, Spain and so on. It may be that we have siloed ourselves in a sense and don’t really see ourselves as a big community.

I think the person who said this to me may be right. It may be that we have to completely go back to the drawing board and find another way to promote ourselves. We have such talented people in the Hispanic community, and it ain’t working. It just kills me.

Smashing Interviews Magazine: It’s very interesting that you began your activism after you witnessed Martin Luther King’s “I Have a Dream” speech at the 1963 March on Washington for Jobs and Freedom. That must’ve been so surreal!

Rita Moreno: Oh, my dear! I was there. Whenever I speak of it, I swear to you, I get goosebumps. It’s an experience that will live with me forever, obviously. I’m 90 now, and it still gives me goosebumps. I was there 10 to 15 feet away from him at the microphone. I heard something that most people didn’t know about. Mahalia Jackson, the wonderful gospel singer and friend of his, was sitting next to him.

When he came up to speak, he started with another completely different speech. Mahalia said to him, and I think she tugged on his jacket, “Martin, tell them about the dream. Tell them about the dream, Martin.” So he changed what he was saying and went into his speech where she had heard at one of their church meetings, obviously before that. That’s when he went into the speech, “I Have a Dream.” I mean, you’ve got to get goosebumps with something like that.

Smashing Interviews Magazine: I certainly do just listening to you.

Rita Moreno: I mean, wow. I am thrilled to have been a part of that. We were sitting literally about 10 to 15 feet away from him at the microphone. We were on the area of the Lincoln Memorial, and behind me was that amazing pool. But you couldn’t see the pool. There were people everywhere, people wearing their farm outfits, people wearing their overalls. It was the most extraordinary experience of my life, even way more than the Oscar and more profound.

Smashing Interviews Magazine: That was a little more than 59 years ago, and now you have a birthday coming up!

Smashing Interviews Magazine: How will you celebrate?

I found out, to my delight, that people loveto go around searching for costumes. One time, I had a Cuban theme, and there were at least three guys with Panama hats and white suits and violin cases like they were killers, like there were Tommy guns in the violin cases (laughs).