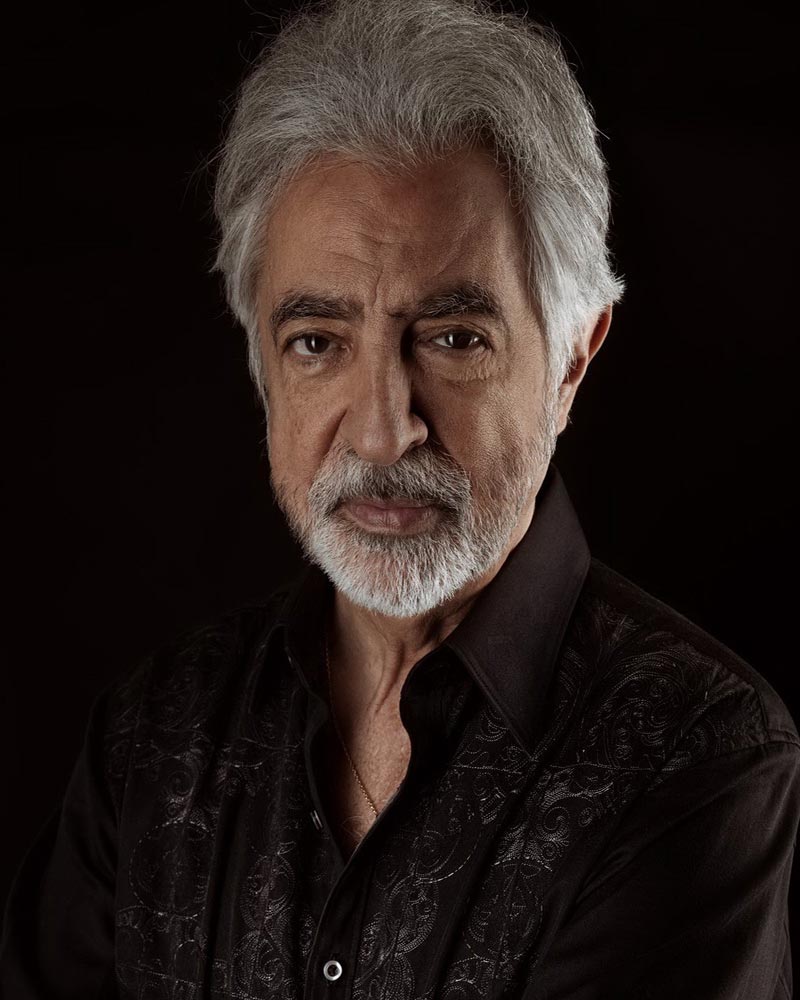 Chicago native Joe Mantegna has a strong background in both theater and film. He won the Tony and Joseph Jefferson Award for his acclaimed performance as cynical real estate agent Richard Roma in David Mamet’s Pulitzer Prize-winning play Glengarry Glen Ross. In film, he is probably best known for his role as Joey Zasa in the Francis Ford Coppola epic The Godfather Part III (1990), in which he starred alongside Al Pacino and Andy Garcia.

Mantegna has earned Emmy Award nominations for his roles in three different television miniseries: The Last Don (1997), The Rat Pack (1998) and The Starter Wife (2007), and he starred in the TV series First Monday (2002) and Joan of Arcadia (2003-2005). Beginning with the 1991 episode, “Bart the Murderer,” he has voiced the recurring role of mob boss Fat Tony on The Simpsons.

From 2007-2020, Mantegna starred in the CBS drama Criminal Minds as FBI Supervisory Special Agent David Rossi. In Criminal Minds: Evolution, the revival series on Paramount+, the FBI’s elite team of criminal profilers come up against their greatest threat yet, an unsub who has used the pandemic to build a network of other serial killers. Now, as the world opens back up, the network goes operational, and our team must hunt them down, one murder at a time. Original cast members reprising their roles include Mantegna, A. J. Cook, Kirsten Vangsness, Aisha Tyler, Adam Rodriguez and Paget Brewster. Criminal Minds: Evolution will premiere with two episodes on Thanksgiving Day, November 24, 2022, exclusively on Paramount+. Following the premiere, new episodes will drop weekly on Thursdays.

"Because we’re on a streaming service, as opposed to the network, we’re able to explore that in some more graphic ways visually, vocally, language-wise, all of that. I like that because it makes it that much more realistic because we do represent a real organization."

Smashing Interviews Magazine: When did you find out that the revival was definitely happening?

Joe Mantegna: Well, there were always rumblings that there was a possibility this was going to happen. But I’ve been in this business long enough that I don’t believe anything. When I hear something is coming back, I’ll say, “I’ll believe it when I’m on the set, and they say ‘action.’” Until that moment, it’s not real for me. So there were rumblings, and then more and more, it seemed to be realistic. Then finally, that day came when they said “action,” and I got to say that first line as Rossi once again. At that moment, I said to myself, “Ah, yes, I guess we’re back.” So I’m just glad we are. Right now, we’re filming episode nine of the 10 we’re doing this season. God willing, we’ll do more. I’m thrilled with what we’ve done so far.

Smashing Interviews Magazine: How did it feel to be back on the set with the cast?

Joe Mantegna: It was great! We literally have bonded, as one would imagine a group like this would, working together for so long like we have. So it was a very pleasant reunion. We’ve all pretty much stayed in some touch with each other anyway. We had a text thread going all of the last two and a half years, as far as that goes, and we would occasionally see each other for different occasions or events. But it’s like old home week. It’s just great. I know we’re all glad to be back and hopefully look forward to another sustained amount of time together.

Smashing Interviews Magazine: Had anyone seen a script?

Joe Mantegna: No. I don’t think so, and it is done a little differently this time. When you’re on network television, you do 24 or 25 episodes, so it’s unlikely that five or six are prewritten when you start. So it’s a little bit more of an evolution of seeing where you’re going. Where this was more thought out before, there’s one storyline that runs through all 10 of these episodes. It kind of serializes it in some ways, which is cool though. So it gave the writers an opportunity to really delve into that and create this kind of link that makes each story dependent on the next and the next and the next, and yet still, each one has their own independent thing going on as well.

Smashing Interviews Magazine: Can you speak about how Covid is involved in the storyline?

Joe Mantegna: Well, there is that. We do acknowledge that the world has gone through what it’s gone though, and we’re no different. In other words, things have happened. I think we find out that my character’s in a pretty dark place due to circumstances that happened during that time. Because we’re on a streaming service, as opposed to the network, we’re able to explore that in some more graphic ways visually, vocally, language-wise, all of that. I like that because it makes it that much more realistic because we do represent a real organization.

Smashing Interviews Magazine: Exactly. Speaking of language, it is startling at first when Rossi uses much more colorful language (laughs). Did it take some time for you to adapt to that?

Smashing Interviews Magazine: For me, it might be more surprising to hear Penelope use those words (laughs).

Joe Mantegna: Well, rightly so, and I think we do a good job of showing that.

Joe Mantegna: Oh, yeah, trying to give her a little advice maybe. Big mistake on my part.

Smashing Interviews Magazine: That brought back some great memories for this Criminal Minds fan.

Smashing Interviews Magazine: As you also touched on earlier, without network restrictions, there will also be more gore shown in the darker crimes.

Joe Mantegna: Yeah. We’ve had no problems pushing the envelope anyway. I don’t deny we were one of the more disturbing kinds of shows to watch in many ways before. I was a big proponent of that. I was a defender of that and still am in the sense that I don’t want to sugarcoat what these men and women do for a living. In other words, when I was a kid, I’d watch these westerns and see a guy get shot. He’d go, “Ugh,” then he’d fall over. There was no blood. There was no nothing. They made you think, “Oh, that’s like a video game.” It’s not.

This is real stuff. So it’s not that we’re pushing the envelope. But we’re not sanitizing it either, and I think that’s important. It’s like, “Yes. This is what this world is like.” Thank God we have men and women do their best to save us from that. But I think our fans understand and get that and appreciate it.

Smashing Interviews Magazine: You and I spoke several years ago about the fact that Mandy Patinkin, who portrayed Jason Gideon, left Criminal Minds because he was disturbed by the dark content.

Joe Mantegna: Right, and I can respect that, and it’s fine. But I will never be the one to say that. I think that it’s wrong for us to do that kind of portrayal. I think it would be a disservice to the men and women who really do that to say, “Oh, yeah. That’s freaky. That bothers me.” No. Ask them if it bothers them.

Smashing Interviews Magazine: I believe the fans want to know whether Penelope and and Alvez have decided that they are just friends or whether there’s something more there.

Joe Mantegna: (laughs) Well, we’ll have to see. I don’t know. There are all kinds of things where people are going to be entertained and surprised with what happens during the course of this season. To me, that’s the strength of the show, too. It’s called Criminal Minds, but that’s only one aspect of the show. A show doesn’t run 15 seasons because we’re so good at solving crimes. It’s also because the fans are invested in us as characters in our private lives, and that will always be an important aspect of the show. I think the fans are going to see there’s going to be a few wrinkles, a few changes and a few interesting things that’s going to happen.

Smashing Interviews Magazine: Including an appearance by Dr. Spencer Reid?

Joe Mantegna: Anything is possible. Anything is certainly possible. We refer to him. I think I have a line where I kind of say that I’m thinking of giving him a call. Let the fans take that for what it’s worth. We’ll see how that goes.

Smashing Interviews Magazine: Zach Gilford plays Elias Volt who is the mastermind who created this network of serial killers. Had you worked with him before?

Joe Mantegna: No, I hadn’t. I didn’t know him, but we’ve always been blessed to have tremendous guest actors. I mean, you go back to guys like C. Thomas Howell and Tim Curry. It’s a long list of just wonderful actors that have worked on the show over the many seasons, and this is just another example. Zach is just a wonderful actor.

Smashing Interviews Magazine: Which episode will you be directing?

Joe Mantegna: When fans are able to see episode three, that’s the one that I directed.

Smashing Interviews Magazine: Who’s the person that cuts the tension on the set with comedy?

Joe Mantegna: I don’t know. I think that on occasion, I have to take that slot myself only because they figure the old guy can say anything and do anything, and it’s okay (laughs). But I think at any given moment, any of us can and does, and that’s what’s good about it. We all have a strong sense of humor. At any given moment, anybody will take the lead on that, and that’s what keeps us all sane.

Smashing Interviews Magazine: Joe, did you work on any projects when Criminal Minds was cancelled?

Joe Mantegna: I did a series I felt so strongly about called As We See It. You might be familiar with it. That was on Amazon Prime and was created by Jason Katims who did Friday Night Lights. The show is about these three young adults, all on the Autism Spectrum, played by three actors who are on the Spectrum. I played the father of the lead young man. It was a wonderful show. We shot eight episodes. Unfortunately, Amazon decided not to go forward with it beyond that, but I’m immensely proud of the eight episodes we did.  It was a wonderful series. I’m glad I had the opportunity to do that during the time off between Criminal Minds and Criminal Minds: Evolution.

Smashing Interviews Magazine: I saw your cameo appearance on Barry. It was hilarious!

Joe Mantegna: Oh, great. Yeah. That was fun getting to play myself. Henry Winkler’s one of the nicest human beings on the planet.

Smashing Interviews Magazine: You are still on The Simpsons?

Joe Mantegna: Still on The Simpsons, my longest running character. I’ve got over 30 years doing that role. I just did one a few weeks ago.

Joe Mantegna: Just that it is an evolution, and we’re thrilled to be part of it. We hope people enjoy seeing it as much as we’ve enjoyed being back doing it.