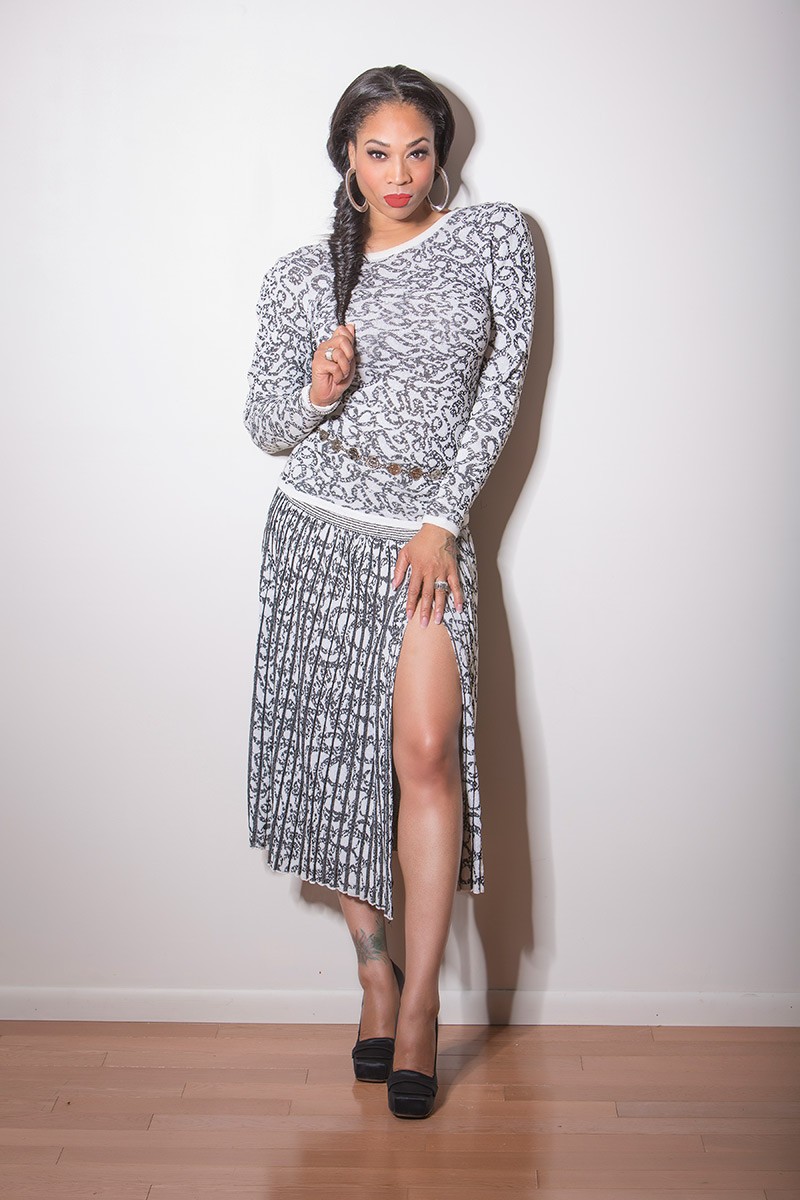 Reality television star Mimi Faust stars on the VH1 program Love & Hip Hop: Atlanta, which chronicles the lives of several women and men in Atlanta who are connected to hip hop music. The show ended season four on August 31, 2015. An East Coast native, Faust spent her childhood in Virginia, Atlanta and Los Angeles, before settling in Cobb County, Georgia to raise Eva, her five-year-old daughter.

In 2003, Faust appeared in the music video for singer Pharrell Williams’ single “Frontin’” with rapper Jay-Z. She would later establish the Keep it Clean, Inc., a cleaning service based in Atlanta. She has recently ventured into creating her own hair line of wigs and extensions, adding beauty expert to her list of accomplishments, as she uses her keen entrepreneurial skills to proudly introduce her new hair line called the Maya collection. Faust also runs her own music company called MF Management.

"Hey, I will get on a plane and visit, but for me to pick up and relocate because Stevie J did is asinine. We’re not together. He is, and I’m doing air quotes, “married” now to someone else, so why the hell would I relocate?"

Mimi Faust: Actually the season is about to pick right back up, so I’m preparing for the next season right now.

Mimi Faust: We’re about to start. We’ve been having our producer’s meetings and all that type of good stuff. I’m in the process of moving. I’ve had a hell of a day today. You know, just when you think your day is just the worst, you get a phone call and your friend tells you what’s going on with them, and you’re like, “Oh. My day’s not too bad after all.” (laughs)

Mimi Faust: Oh no, no, no. I’ll be here in Atlanta. I’m just moving into a different home.

Mimi Faust: Hey, I will get on a plane and visit, but for me to pick up and relocate because Stevie J did is asinine. We’re not together. He is, and I’m doing air quotes, “married” now to someone else, so why the hell would I relocate?

Melissa Parker (Smashing Interviews Magazine): (laughs) Let’s talk about your other interests besides the series.

Mimi Faust: Well, first and foremost, I have my cleaning business which is called Keep it Clean. I started that about fourteen years ago. That is up and running and takes up a lot of my time. I’m coming out with a children’s line, and I have not been able to just totally wrap my hands around that and get it done with everything else that I’m doing. But that’s still on the table. I’m still in the process of writing my book solo. (laughs)

Mimi Faust: Oh yeah. There was never a co-author. What Nikko did was, because we were together, he felt like he was entitled to 25% of the book because he found a ghostwriter for me. I’m so confused how you think that makes sense or that it’s fair or any of that. But in his mind, he felt like that was fair, and at the time, I was an idiot and thought, “Well, you know, we’re together. We’ll be making the money together.” So I signed a contract. We’re not together anymore, and yeah, the contract that he had me sign was a one-pager, but I got myself out of it.

I’m actually in business with a hair company, and I have a hairline out called The Maya Collection. Hair nowadays is just a win/win. It’s big, big business, and the hair that I use and wear … my hair is really good quality. It’s a good grade. It doesn’t shed and doesn’t get tangled. So I’ve decided to partner up with this company, and we put out a collection of my own. What else am I doing? There’s the hair line and Keep it Clean. KM Management is a lot of work. I didn’t realize how much in the beginning, but you’ll be seeing more of KM Management this upcoming season. Between all that and trying to move, I’m pretty busy, and then there’s my five-year-old (laughs).

Melissa Parker (Smashing Interviews Magazine): Do you have the work ethic of an entrepreneur?

Mimi Faust: Absolutely. I just want to do the next thing. I want to just keep going and keep pushing, and try to do something even better than the last thing. Absolutely.

Melissa Parker (Smashing Interviews Magazine): Would you like to get into films as an actress?

Mimi Faust: I would love to do that! Let’s just talk about TV though, not reality. One of my favorite shows right now is The Walking Dead. I’m glued every Sunday at 9:00 (laughs). That is my show. If I can’t watch it, I’m DVRing it. Empire is one of my favorites. I love Orange is the New Black. I would love to be on any of those shows like a guest appearance or something. Love to do that!

Melissa Parker (Smashing Interviews Magazine): Interesting to hear about your favorites because Love & Hip Hop: Atlanta is a guilty pleasure for many people.

Melissa Parker (Smashing Interviews Magazine): Absolutely. If you could go back, would you change anything about this past season?

Mimi Faust: Oh my. How much time do you have? (laughs) There are so many things that I personally would change, but then again, if I went in and changed it how I wanted, it probably would have a whole different outcome. The producers know what they’re doing, and they make it work. They have a formula, and I’m just going to let them do that.

Even if it is my life that’s out there, I look at this job like, “Hey, I’m going to work.” Whatever happens, happens. I’m not going to sit and cry about spilled milk. It’s done. It’s out there. Whatever. You can’t change it, so it’s pointless crying over spilled milk. There it is. You got it, and its number one again (laughs).

Mimi Faust: Oh my God. I like a wide range of music. I just don’t like R&B and Hip Hop only. I like everything. But since we’re talking about Hip Hop and R&B, I love Drake right now. To me, Drake is awesome. I love what Rihanna is doing. Beyonce is always a definite.

Justin Beiber has a song out right now with a producer and another artist. I’m loving this song. It’s called “Maria I’m Drunk.” You should Google it one day. I just like all types of stuff. I can’t just pinpoint one or two things. I just love music. I’ll sit and flip the stations and say, “Oh my God. I love this song!”

Mimi Faust: Times a thousand. She is so incredible. I just look at her and wonder where she came from. Then I think, “Oh. That’s right. Me.” (laughs) She’s so awesome and has the most loving, outgoing, funny personality. She gets along with everybody. She’s a leader. Eva’s the most amazing little girl ever. She’s probably the best thing I’ve ever done in my life hands down. I swear to you. Best thing ever.

Melissa Parker (Smashing Interviews Magazine): On your Twitter you posted, “Today is a beautiful day simply because God made it!” Can I assume you are a Christian?

Mimi Faust: I believe in God. I wouldn’t say I’m a Christian. I was baptized and grew up with that, but my mother introduced me to lots of different religions when I was younger. Now that I’m an adult, I don’t say that I’m a Christian or a Buddhist or Scientologist. I just believe in a higher power or that there is a God, and he created us and everything. That’s where my belief is.

Melissa Parker (Smashing Interviews Magazine): I know that you do a lot for breast cancer awareness. Is this something that is near and dear to you?

Mimi Faust: Yes. It runs in my family. My grandmother passed from breast cancer. My mother actually passed from pancreatic cancer, so it runs on my mom’s side. I make sure to get myself checked out with mammograms. I know a lot of people here in Atlanta who have suffered with cancer themselves or have recovered from cancer or had a family member or loved one pass from it.

I do whatever I can do here in Atlanta to help like fundraisers and things like that for breast cancer awareness. I think it’s important to spread the word and get more people out there involved. I don’t know if they can find a cure for it, but I hope they can do whatever they can do to make the situation better.

I personally think, and this is my own personal opinion, that it comes from the food that we eat because the food has so much pesticides in it. If you think about it, the majority of the foods are priced really cheap that are processed. Your organic stuff that you get at Whole Foods and Trader Joe’s is very expensive, and a lot of people don’t have that type of money to buy that or have the knowledge to say, “Oh maybe I should go organic.” It doesn’t have the pesticides.

You’re not supposed to ingest pesticides or all that other stuff. That’s my personal opinion. I think that cancer comes from the food that we put in our bodies. Even starting as a child, we keep eating and eating this stuff, and it’s slowly killing us. We get in our 40’s, and all of a sudden, we have cancer. That’s my take on it.

Melissa Parker (Smashing Interviews Magazine): Are you a vegetarian?

Mimi Faust: You know, what’s so crazy is that my body is slowly but surely weaning me in that direction. I’m not able to digest red meat anymore. Even chicken will tear my stomach up. My body is telling me, “You can’t eat this stuff.” It just rejects it, so yeah, I’m almost there.

Melissa Parker (Smashing Interviews Magazine): Is there a romantic interest for you right now?

Mimi Faust: Oh we’ll see about that (laughs). I’ve been dating a little bit, so we’ll see what happens. Yeah.

Melissa Parker (Smashing Interviews Magazine): As a parent, what’s the most important lesson you can teach Eva?

Mimi Faust: I think the number one rule is the oldest one in the book which is “Do unto others.” If you treat people how you want to be treated, nine times out of ten you’re going to get a good result back. You can’t predict everyone’s actions, but nine times out of ten if you are good to people, then you’ll get that back.

I teach her to have an open mind. She’s five. I’m not a racist. I teach her to love everybody. It doesn’t matter about the color of your skin or the way you look. I just want her to be the best person she can possibly be. So any little thing that I can think of to instill that in her is what I try to do. It’s the little things, you know?

Melissa Parker (Smashing Interviews Magazine): Mimi, continued success with the show and your other business ventures. Do you have to be moved by a certain date?

Mimi Faust: Yes. I have about a month to find a place, get moved, and I’ll be filming at the same time. So you can only imagine.

« Colin Hanks Interview: "Life in Pieces" Star Talks "The Rise and Fall of Tower Records" and Famous Father
Steven Pinker Interview: Inside the Mind of One of the World's Most Influential Thinkers »