Lea Thompson Interview: "The Year of Spectacular Men" Is a True Family Project 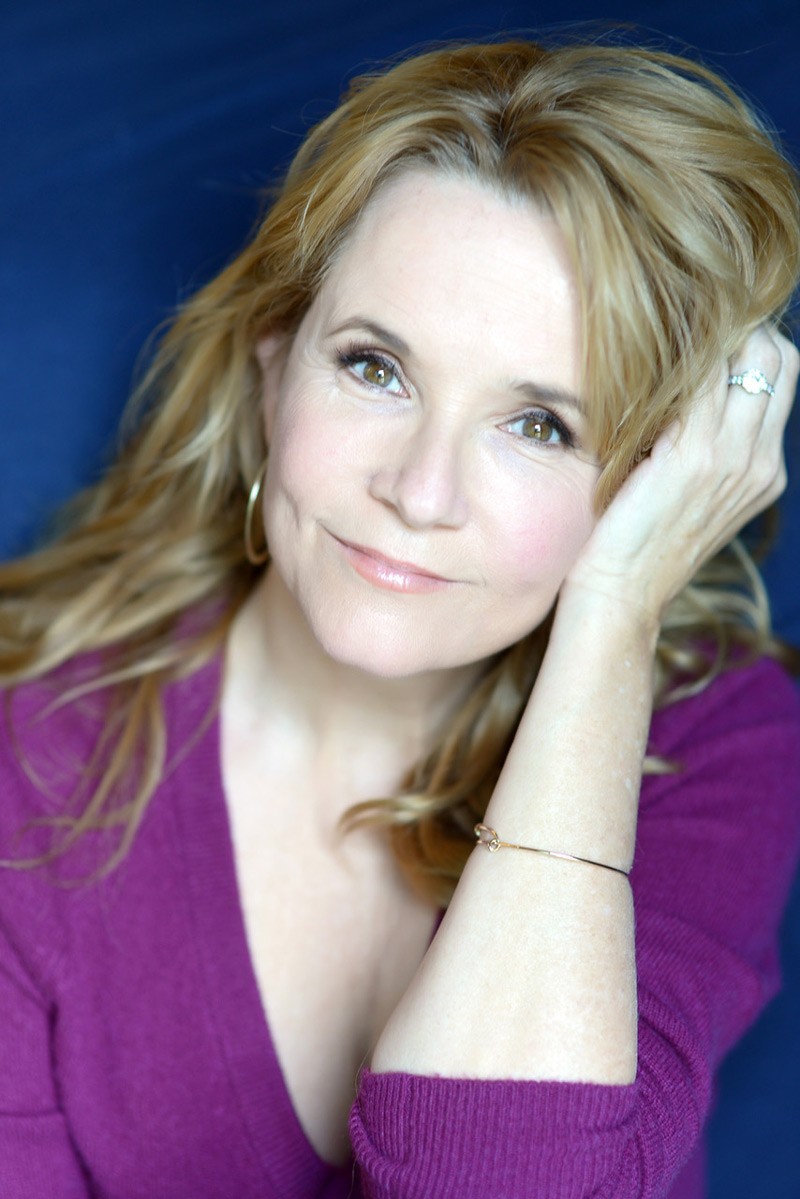 Lea Thompson is perhaps best known for her role as the various incarnations of Lorraine McFly in the Back to the Future trilogy and as the title character in the 1990s NBC sitcom Caroline in the City. She starred as Kathryn Kennish in Switched at Birth that premiered on ABC Family in 2011 (rebranded as Freeform in 2015) and ended April 11, 2017.

Other films include All the Right Moves, Red Dawn, Howard the Duck, Some Kind of Wonderful and The Beverly Hillbillies. Thompson makes her feature film directorial debut and also acts in The Year of Spectacular Men, starring her two daughters Madelyn and Zoey Deutch, which will have its world premiere at the Los Angeles Film Festival on June 16, 2017.

"I’ve had such a beautiful career of doing so many different things that it would be hard for me to pick what I like best. I feel like I’ve been an artist since I was 11 years old. I was a ballet dancer. I was an ingénue. I’ve been on Broadway. I’ve done all these things, but I’ve never really created something from the ground up like this film before as an artist."

Thompson has been married to film director Howard Deutch since 1989. Their two daughters, Zoey and Madelyn, are 22 and 26 respectively.

Melissa Parker (Smashing Interviews Magazine): Lea, The Year of Spectacular Men is certainly a family affair! Is it perhaps the first film to have mom, dad and two daughters involved?

Lea Thompson: It might be. It’s an interesting event. Luckily my husband didn’t really produce it. We had another group of producers, the real producers, that did all the difficult work of raising the money and making the movie was a company called Parkside Pictures. If my husband had been on the set all of the time, that would’ve been impossible (laughs). We never agree (laughs). Big surprise, right? We have different opinions about acting, so that would’ve been a disaster. But Howie’s been really helpful in a lot of other areas that weren’t exactly involving production.

But yes, our daughters and myself, and I was so honored by my producers because some people would’ve been like, “I’m not getting involved in that! Two daughters and their mother?” Anyone in their right mind wouldn’t want to get in the middle of that. But they were so awesome to see that we were really collaborators more than anything else. It was a passion project that we’ve been working on for four years.

Melissa Parker (Smashing Interviews Magazine): Is it based on Madelyn’s life, and is she the primary writer?

Lea Thompson: Yes. She wrote the whole thing. It’s all her idea. Everything. Every word is hers. She graduated from college and had this kind of “millennialitis” where she couldn’t figure out what to do with her life. She had all these romantic misadventures and was kind of miserable. I knew she was a great writer because she writes beautiful music, and I’ve been reading her writing since she was a little girl. She was taking these classes and I said, “Why don’t you write a script?”

She started writing a script and I was blown away when I read the first draft. I was like, “This is amazing! I have to make this movie and I have to direct it.” She was nice enough to let me. Honestly, these kind of movies are so difficult to make. They take so much tenacity and energy. It’s hard to find something you’re that passionate about that you want to spend that much energy and your life doing (laughs). So I felt honored. It was wonderful.

Melissa Parker (Smashing Interviews Magazine): What did you actually want to convey in the film, and does Madelyn find her spectacular man?

Lea Thompson: You’ve got to see the movie, but the title is kind of sarcastic really. I think we wanted to explore the themes of what it’s like to be a millennial woman. They don’t make many stories about millennial women, like 22-year-old women. They seem to go from 17 to 30 really fast, you know, in the way that people tell stories, so it’s a really underserved group of women. It’s a sadly misunderstood group of people. She has a very specific sense of humor about things, a very self-deprecating, honest sense of humor.

I think she wanted to talk about being lost and how you find yourself by facing the truth about yourself, about unearthing secrets that have been holding you down, about how hard it is to make an honest connection with another human being and just how hard it is and how ultimately family is incredibly important in finding your own grounding, your own spirit, your heart, you know? Those are the deeper themes that we were trying to explore all wrapped up in a kind of self-deprecating sense of humor.

Melissa Parker (Smashing Interviews Magazine): Zoey looks just like you did during your Back to the Future days. There is such a striking physical resemblance between you two. Are the personalities similar?

Lea Thompson: No. If you had to make broad generalizations, Zoey looks a lot like me and acts like her dad, and Madelyn looks more like her dad maybe and acts more like me (laughs). They’re both remarkable artists and really strong women, stronger than me, that’s for sure.

Melissa Parker (Smashing Interviews Magazine): You’ve had such a storied career in television and film. Which do you prefer?

Lea Thompson: I’ve had such a beautiful career of doing so many different things that it would be hard for me to pick what I like best. I feel like I’ve been an artist since I was 11 years old. I was a ballet dancer. I was an ingénue. I’ve been on Broadway. I’ve done all these things, but I’ve never really created something from the ground up like this film before as an artist.

For me this is like a very big accomplishment. But that said, it has taken everything that I have. That’s always a great feeling, but in some ways, you’re like, “Oh, God!” (laughs). I think if I was lucky enough to get another feature that I really cared about, I would be super happy. That would be wonderful and that’s my hope.

Melissa Parker (Smashing Interviews Magazine): Is it just as fulfilling for you to direct as it is to act?

Lea Thompson: Yeah. I think so. I really do. I find it really wonderful to be able to use all of the knowledge I’ve gained in all the years, and I feel like it all comes together when I’m directing. I can use so many different things that I know and I can give back in a way. I can be so openly appreciative of people doing their jobs well, and I can give back in a strange way. It almost feels like teaching. Being the boss is really fun. It’s scary to be the ultimate decider but it’s exciting. I always try to do things I’m afraid of because it keeps me in the game. It keeps me young.

I had such incredible actors in The Year of Spectacular Men. All of the six male actors had to really make fun of themselves and all are incredible leading men in their own right. So for them to come and do this movie and be so funny and throw their whole hearts into it was so gratifying for me. I’m just so grateful and it was so fun to direct them. I feel like I’m like a kid in a candy shop when I get a great actor and just let them do what they do. It’s an amazing joy.

Melissa Parker (Smashing Interviews Magazine): You are starring as Marmee in a new adaptation of Little Women. When will that be released?

Lea Thompson: I don’t know when it’s going to come out. It’s an independent movie so we have to sell it and get it out. We’re shooting it right after The Year of Spectacular Men debuts at the Los Angeles Film Festival on June 16. It’ll probably come out in a year or a year and a half.

Melissa Parker (Smashing Interviews Magazine): Over the years, some portrayals of Marmee have been as sort of this perfect mother who stays in the background, but she has also been portrayed as a politically active feminist. Do you know how you will play her?

Lea Thompson: I would probably opt for the latter description if I had the choice. It’s a really a beautifully written adaptation. So yes, I think we will have the latter. I have dedicated my life to my children, my home and my husband. I’ve been married for 29 years. I have that life, so I have a unique perspective on motherhood and playing mothers because I’ve actually been playing mothers of 17 year olds for 34 years. So I have a really unique perspective on playing mothers (laughs). But I have no intention on playing a boring Marmee. I’m going to play an interesting Marmee.

Melissa Parker (Smashing Interviews Magazine): Is there any interest in doing another Back to the Future movie?

Lea Thompson: We’ve bounced it around until it was bounced into the ground. No. I believe that Zemeckis controls the rights. As long as he’s alive, they can’t make a Back to the Future 4 or a reboot without his permission, and he said he won’t give his permission. I think he has enough money, so he doesn’t need the money (laughs). I don’t think it will happen for a while.

Melissa Parker (Smashing Interviews Magazine): Did you get to take any souvenirs home from the Back to the Future sets?

Lea Thompson: I just have the pink ball gown and the shoes and the bustier or whatever it is I wore underneath. That’s all I have from Back to the Future.

Melissa Parker (Smashing Interviews Magazine): I’ve enjoyed the relationship your character (Veronica) has with Paige (Katharine McPhee) on Scorpion. Any plans to return?

Lea Thompson: I love that character. I hope they bring me back. I wanted to direct that show, but I haven’t gotten much headway into that yet. But I will. I’ll keep trying. That’s a great cast.

Lea Thompson: Just The Year of Spectacular Men, and I’m going to be directing more episodes of The Goldbergs in the fall. Just trying to get it done. I’ve got a bunch of other projects I’m pitching for TV and another feature, so I’m kind of doing a lot of development right now.

Melissa Parker (Smashing Interviews Magazine): On your Twitter page, it says you are a proud chicken owner …

Lea Thompson: I have horses, chickens, ducks, bunnies, cats, dogs and fish. I pick up lots of animals. My whole family is crazy about animals. We’re like weirdos. I even got lucky to have a rooster that really doesn’t have a very loud voice, thank God.