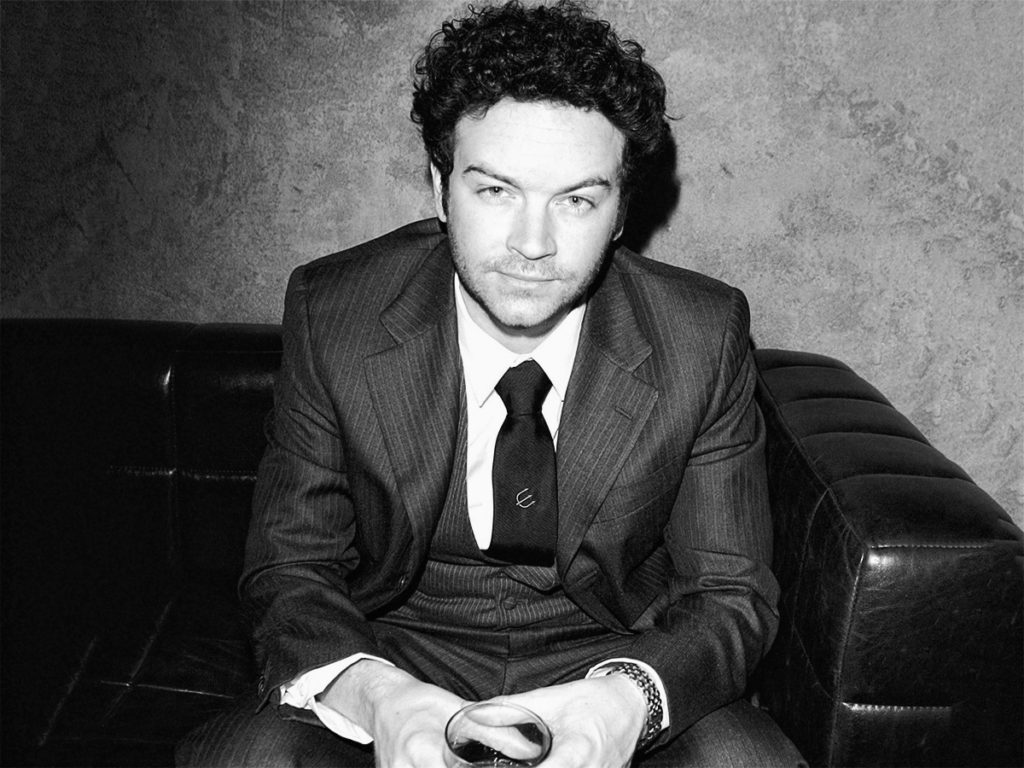 Born March 13, 1976, Daniel Peter “Danny” Masterson is best known for his role as the rebellious teen who ends up being adopted into the Forman family on the Fox sitcom That '70s Show which ran eight consecutive seasons from 1998 until concluding with the 200th episode on May 18, 2006. The series centered around the lives of a group of teenage friends living in the fictional suburban town of Point Place, Wisconsin during the years of 1976-1979.

"The character is sort of written to be typically an angry local cop guy, and I play him a little more flippant, which I thought was more fun. He just has these sarcastic one-liners under his breath and kind of doesn’t take things too seriously except for the fact of how much he hates the superheroes. He takes that very seriously. It was a lot of fun to play."

The New York native began acting in commercials, theater and Broadway musicals at a very early age. His television credits include Roseanne, Party of Five, NYPD Blue, Cybill (as Justin Thorpe), King of the Hill, MADtv and Entourage and has appeared in the following films: Face/Off, Too Pure, The Faculty, Dracula 2000, Comic Book Villains, Yes Man, Made for Each Other, The Bridge to Nowhere and The Chicago 8.

Masterson’s latest film offering, Alter Egos, a comedy about superheroes directed by Jordan Galland, is now playing in limited release and available nationwide On-Demand. The actor can currently be seen in the TBS comedy series Men at Work and is married to actress Bijou Phillips.

Danny Masterson: Basically, my character Jimmy is the bad guy in the movie. It’s about if superheroes were real people, but at this point in the world, they weren’t necessary and people start hating them. You find out throughout the film that basically everyone is born with a superpower. It’s just whether they’re able to harness it or not and become superheroes.

Jimmy is the local town cop. He can turn invisible, but only for 2.3 seconds (laughs). He’s pretty bitter. These superheroes come to town, and one starts flirting with his ex girlfriend, and he gets really pissed and sort of stuck with him for the rest of the movie.

Danny Masterson: Definitely not (laughs). It’s like Batman, you know, just for one one hundredth of the budget.

Melissa Parker (Smashing Interviews Magazine): The actors were asked for input. Did you offer script advice?

Danny Masterson: The character is sort of written to be typically an angry local cop guy, and I play him a little more flippant, which I thought was more fun. He just has these sarcastic one-liners under his breath and kind of doesn’t take things too seriously except for the fact of how much he hates the superheroes. He takes that very seriously. It was a lot of fun to play.

We got to shoot out in the Hamptons in the fall, which is beautiful, nice and chilly. Jordan Galland wrote the script and directed it. I loved his first movie, Rosencrantz and Guildenstern Are Undead. It was just fun working with all those guys.

Danny Masterson: He has a smaller part as one of the villains, and he made an unbelievable score. He also scored Jordan’s last film. They’ve been best friends for a really long time. Actually, Jordan and my wife Bijou have been best friends since they were in their young teenage years.

Melissa Parker (Smashing Interviews Magazine): As a youngster, did your read comic books?

Danny Masterson: Yeah. I was a big fan of the Punisher. Remember the Punisher? He wasn’t really a superhero. He was more of a real person, so I wasn’t super into the superpowers superheroes. I was more into the vigilante types.

Melissa Parker (Smashing Interviews Magazine): I liked the comics of Batman and Superman.

Melissa Parker (Smashing Interviews Magazine): You began acting at such a young age.

Danny Masterson: I started doing commercials when I was five. Then, I started doing plays and soap operas and stuff like that in New York. I moved to LA when I was sixteen to do a movie, booked a show after that, then did four different shows and started That '70s Show in ’98. I’m working on a show now called Men at Work.

Danny Masterson: It’s funny. You don’t feel like you’re entertaining people while you’re at work. You just feel like you’re trying to not do a bad job and trying to take somebody’s dialogue and deliver it as real as possible. Then you have people come up to you and say, “Hey, man, my job kind of sucks and my wife’s always busting my balls, but I get to go home and watch your show and it makes me laugh for 30 minutes and I can forget about my life.”

Well, that’s when you say, “Holy Shit, I actually like the job,” which seems kind of ridiculous actually, but it is good for people.” That kind of makes it nice.

Danny Masterson: Yeah. I did that for two years. That was really fun.

Danny Masterson: Exactly. I had one audition for the producers and then an audition for the Fox network and started the show two weeks later. I was working on the movie The Faculty with Robert Rodriguez, and they had to cut my part short so I could go and shoot the pilot.

Melissa Parker (Smashing Interviews Magazine): What were you told about Steven Hyde?

Danny Masterson: They literally didn’t say too much. When we all auditioned, they didn’t really give us a lot of background on the characters. They said, “He’s kind of a deep theorist stoner type, so just make him whatever you want.” People were coming in auditioning him a million different ways and different races and everything.

I just came in, and for my audition and did eight different characters. They laughed really hard, and then I basically figured out how to do him by Episode 4 or 5.

Danny Masterson: Well, not really. We could get into government conspiracies for the next six hours, but I have an amazing family. I’m not bitter about anything. I like people a lot, I’m pretty much the opposite of Steven Hyde.

Melissa Parker (Smashing Interviews Magazine): I actually think that underneath that bitterness, he had a good heart.

Danny Masterson: He did, yeah, which came out with all the stuff with Jackie, but he didn’t want anybody to know that, you know? Just wanted to keep it on the “DL.”

Danny Masterson: That was fun.

Melissa Parker (Smashing Interviews Magazine): Did they just pump all that smoke continuously into the room?

Danny Masterson: Yeah. They just pumped smoke. Most of us … Laura, Ashton and I smoked cigarettes at the time. We’d be smoking cigarettes and holding them low, and then they would just pump in this movie smoke that smelled like strawberries. It was like some incense in the background.

Melissa Parker (Smashing Interviews Magazine): Well, that certainly was better than the aroma of smoke (laughs). You were older than the rest of the cast.

Danny Masterson: I was two years older than everybody. Mila was 15, Wilmer was a senior in high school, and I was already 22 and was living in my fifth apartment and had been working forever. Kutcher, Topher and I are all about the same age. They are a couple of years younger. Mila sort of spent a few years modeling around the world, so she had a little bit of an older vibe.

Melissa Parker (Smashing Interviews Magazine): You’re also a musician. When can we listen to your tunes on a record?

Danny Masterson: You’ll never hear me on an album (laughs). No. No. No. I’m a closet guitar player. I play the guitar a lot at home and just jam with friends, but I’m definitely not looking to start a music career.

Melissa Parker (Smashing Interviews Magazine): Congratulations on the success of Men at Work.

Danny Masterson: Thank you. Comes back next April. I’m shooting a film now called Killing Winston Jones where I play Richard Dreyfuss’ son. That movie’s kind of like Dreyfuss and Danny Glover as two grumpy old men, and I’m in between trying to keep them apart.

Danny Masterson: That’s basically it. That’s the rest of my year. I’ll be doing that until next summer and then probably find another movie or two to do and hopefully shoot Season 4 of Men at Work.

Danny Masterson: I did, yes.

Danny Masterson: It was great. We’ve been living together for eight years, so the first year of marriage didn’t seem to be too different than the second year of living together. But we had a nice honeymoon, and Bijou’s a great girl. She has been working on Law & Order and goes back to work on Raising Hope soon. She’s having a lot of fun as well.

Danny Masterson: Seemed like a fun way to lose some money, and then we ended up not losing money. We’ve bought and sold eight restaurants. The last one is called the Geisha House, which is like a Japanese sushi restaurant. It’s awesome, then there's a Korean place, an Italian place, a steakhouse, a couple of sports bars that are doing really well, a bar in Park City, Utah and one in Hollywood.

Melissa Parker (Smashing Interviews Magazine): What are your plans for Christmas?

Danny Masterson: We all go up to Park City, Utah. I’ll be shooting the movie up until December 23, and then fly up to be there on Christmas Eve to hang out with my family … my parents and all my brothers and sisters.