Danica McKellar Interview: "Wonder Years" Star Gets in the Holiday Spirit with Hallmark's "My Christmas Dream" 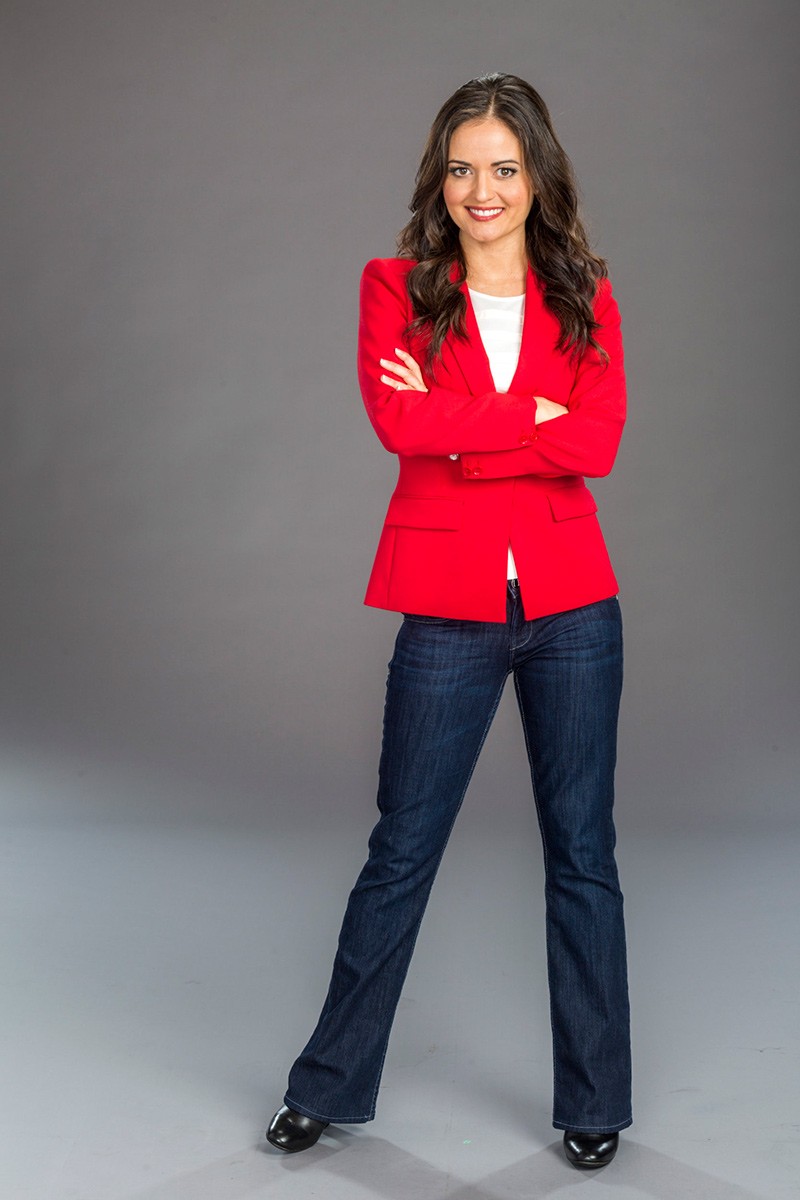 Danica McKellar is best known for her role as Winnie Cooper in the comedy-drama The Wonder Years, which ran on ABC from 1988 until 1993 and also starred Fred Savage and Dan Lauria. Other TV appearances include The Twilight Zone, Babylon 5, The Division, The West Wing (recurring role, 2002-03), NCIS, How I Met Your Mother, The Big Bang Theory, The Secret Life of the American Teenager and several television movies.

"My identity was to be grounded in my own smarts, my own hard work I could do on my fortitude and my ability to tackle challenges, whether it be math problems or other things. That was an amazing lesson I got to teach myself. That’s part of why I write math books, to tell young girls to not be afraid of math and to embrace their smarts because actors on TV struggle with self-worth and identity as teenagers."

Melissa Parker (Smashing Interviews Magazine): Danica, you are no stranger to the Hallmark Channel, especially during the Christmas season. Is that becoming a tradition for you?

Danica McKellar: It certainly is, and I’m thrilled about it. I absolutely loved being part of the “Countdown to Christmas” last year for the Hallmark Channel. It was completely magical and such a fun experience. I told them that I wanted to do another one. They were like, “Great!” So, I would love for this to be a tradition. Hallmark Channel just really knows how to do Christmas and how to put you in the Christmas spirit.

Danica McKellar: It is indeed, and if you’re familiar with the Hallmark Channel, you won’t be surprised at all (laughs). A romantic comedy mixed with Christmas is a great combination. It’s like chocolate and peanut butter. They really go together. Christmas is twinkling lights and magic. It feels like falling in love, so having a romantic comedy at Christmastime is perfect.

Melissa Parker (Smashing Interviews Magazine): There is a child actor in the movie as well?

Danica McKellar: Yes, Christian Convery. It was so much fun working with him! He’s six years old. That’s the age of my son. I just wanted to eat him up like every day (laughs). I was a child actor, so I remember what it was like to be little and be on set. I wasn’t quite as young as him when I started. I was more like ten, but Christian was a little professional, and he’s such a good actor. I would squeeze his hand to remind him to look at me, if we were close to each other in a scene. David (Haydn-Jones) would do the same thing.

There was this one scene where we weren’t anywhere near each other. I was inside the car, and Christian was outside, so that was impossible. He loved cherries, so I had a cup full of cherries in the car with me, and every time he’d do a take or would look at me the whole time, I’d give him a cherry (laughs). That worked out very well. These kinds of tricks you learn being a mother. Bribery is part of the deal. What can I say?

Danica McKellar: He was five when I was shooting this movie, but he’s six years old now.

Melissa Parker (Smashing Interviews Magazine): What’s Christmas like at your house every year?

Danica McKellar: Oh, my goodness, I love Christmas! We have a big tree. I actually get a living tree. We have a tree in a pot that is actually alive, so we give it back. We rent a Christmas tree, which is a really special thing to do. We have so much fun decorating the tree together, and making Christmas cookies is a big tradition. Baking is one of my very favorite things to do.

Melissa Parker (Smashing Interviews Magazine): Why did you want to pursue acting as a career?

Danica McKellar: You know, some of us are born with a desire to role play. I don’t know how else to say it. We love acting things out. My son actually likes role playing, or if he’s learning about something, he’ll pretend to be that thing.

I’m not going to encourage him to be an actor necessarily. If he wants to, I wouldn’t keep him from it like some actors do their kids (laughs). But, whatever Draco chooses to do in his life, he’s certainly not shy. I used to love being in front of a camera doing home videos. We’re constantly videoing, so I don’t think he’s alone in that regard (laughs). But, yeah. I just love playing make believe.

Melissa Parker (Smashing Interviews Magazine): It’s interesting because you were 12 or 13 when you got the role of Winnie Cooper on The Wonder Years and about 18 when it was over, so you grew up on the show and was also experiencing new things in real life.  How did acting effect those formative years for you, and was it difficult to move on?

Danica McKellar: Well, my parents were really great in terms of not over prioritizing Hollywood. Although I was acting as a child, that wasn’t the main thing in my life. It was an interesting hobby, but it didn’t rule our world. Family and education came first, and that was made very clear.

In fact, the first year The Wonder Years was nominated for an Emmy, my dad, sister and I had a river rafting trip scheduled in Oregon, and it conflicted with the Emmys. We went on the trip, and my parents were fully in support of that. My dad had a very busy work schedule, and we weren’t going to cancel the trip. The night before we hit the river, we were in this little motel room, watched the Emmys on this tiny TV, woke up at five the next morning, went to the river and had the trip of our lives. I’ll never forget it. That kind of thing really was so great for me because it kept my priorities straight.

I think kids run into problems when they identify their value with a character they play. It is hard when a show ends. It’s a letdown. But, I went to get a degree in mathematics, so I went in a totally different direction, and that was, besides my good parenting, the thing that really saved me. I found my identity.

My identity was to be grounded in my own smarts, my own hard work I could do on my fortitude and my ability to tackle challenges, whether it be math problems or other things. That was an amazing lesson I got to teach myself. That’s part of why I write math books, to tell young girls to not be afraid of math and to embrace their smarts because actors on TV struggle with self-worth and identity as teenagers.

Melissa Parker (Smashing Interviews Magazine): One of the messages of the math books is to instill self-confidence in girls?

Danica McKellar: Yes. Absolutely. They are self-confidence building books in disguise. They teach math. Some of the girls have written to me and said that their math has improved. There’s one called Math Doesn’t Suck, and it’s for ages 9 to 11. The next one is Kiss My Math, and that’s ages 11 to 13. I’ve got an Algebra I and Geometry book. They all do the same thing. They teach math in fun ways that make the math relatable. I use funny stories and analogies to help them remember formulas.

Alongside that, I have stories of women who use math in their lives, in jobs you might not think that math is used and inspirational stories of young women who are smart. I have personality quizzes and math horoscopes in the books, just fun, silly things that makes it more like a teenager magazine than a math book. The covers also look more like teen magazines than math books as well.

Melissa Parker (Smashing Interviews Magazine): You have a new book coming out next year?

Danica McKellar: I’m just starting a series of eight books actually, starting at a much younger age. I’ve been asked by parents who have kids even younger, “Can you please start younger? Can you please have something for our little ones?” So, yes, I’m doing that. The first one’s called Goodnight, Numbers, and it comes out in March. It’s actually available for preorder now.

Melissa Parker (Smashing Interviews Magazine): You attended The Gracies (The Alliance for Women in Media) in May, so are you an activist for women’s issues or political in any way?

Danica McKellar: I don’t get involved in politics per se. But, one of my main goals in life is empowering young girls to feel smart and capable, not to necessarily be mathematicians or scientists, but to do anything they want to do in their lives. But, I do believe very strongly we need to see more girls and women represented in math and science. I think there’s a whole slew of stories that haven’t been told yet of women.

Danica McKellar: (laughs) Thank you. Oh, my goodness, a really boring diet. I eat a lot of vegetables, a lot of brown rice and whole grains. I really stay away from the sugar, dairy and gluten. I have those things in small amounts, but they’re really small. It’s mostly vegetables and protein. I’m not a vegetarian. I eat beef, chicken and fish, but just lean meats.

I hardly drink alcohol. I don't drink coffee. Again, very boring. Very boring. But, that, along with Pilates and dance really keeps me feeling the way I want to feel.

Danica McKellar: There are more projects along the way. I’ve got a Lifetime movie coming out on January 1, called Mommy, I Didn’t Do It. It’s actually a sequel to a Lifetime movie I did three years ago called The Wrong Woman. That’s a very different kind of film from my Hallmark movies, although it’s pretty darn wholesome as Lifetime movies go, that’s for sure.

I’m continuing to write these books. I’m looking to shoot another Hallmark movie in January, but I don’t think I’m supposed to be talking about the details yet. I will say that I’m going to do live tweeting for My Christmas Dream on Saturday, November 19, and that should be fun.

« Wendie Malick Interview: "Funny and Snarky’s Been Very Good to Me"
Deidre Hall Interview: Soap Icon Talks Hallmark's "My Christmas Dream" and "Days of Our Lives" »