Carrie Preston Interview: "The Way 'True Blood' Handles Diversity in All Ways, Shapes or Forms Is Great and Important" 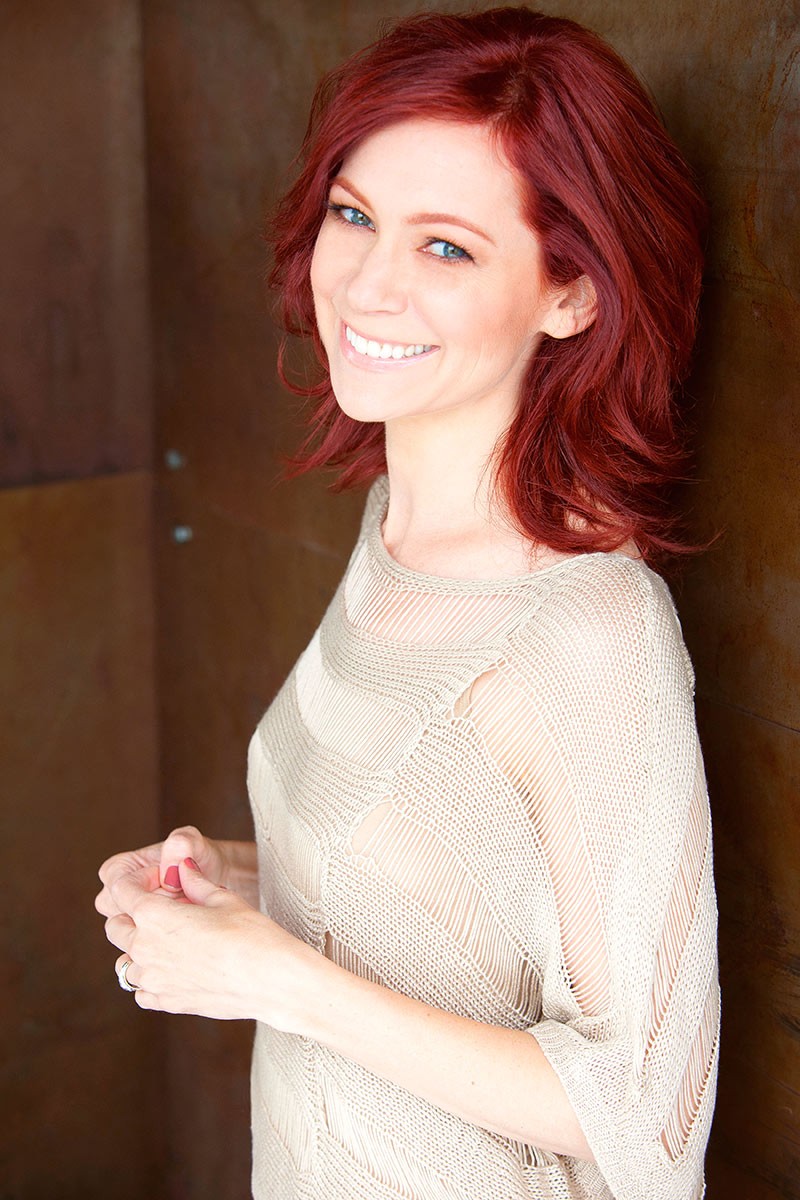 Carrie Preston studied at the famed Julliard School in New York and landed one of her first professional acting jobs portraying Miranda in a Broadway revival of Shakespeare’s The Tempest opposite Patrick Stewart. She played Ophelia in a production of Hamlet at the Alabama Shakespeare Festival and met fellow actor, Michael Emerson, who would become her husband a few years later in 1998.

Along with several more theatre credits, Preston made her feature film debut in the hit romantic comedy My Best Friend’s Wedding. Other film roles include For Richer or Poorer, Mercury Rising, The Legend of Bagger Vance, Straight-Jacket (with Michael Emerson), The Stepford Wives, Transamerica, Duplicity, That Evening Sun, Virginia and Beneath the Harvest Sky.

"The way [True Blood] handles diversity in all ways, shapes or forms is great and important, and I definitely stand behind it."

Preston landed one of the biggest roles in her already impressive career when she was cast in HBO’s drama series True Blood as waitress Arlene Fowler, a well meaning, albeit somewhat bigoted (against vampires) single mother. The seventh and final season of the hit show premiered on June 22, 2014, and the last episode will air August 24, 2014.

Carrie Preston: I’m very happy with what the writers have given me this year and last year. I feel like Arlene has gotten more complicated, and the writers have given me challenging things to tackle. I’m very grateful for that. I feel that out of all the characters on the show, Arlene has had one of the greatest journeys from pilot to final season.

Melissa Parker (Smashing Interviews Magazine): Do you think True Blood fans will be pleased with the last episode?

Carrie Preston: I think what the writers have done has served the greater story. I wouldn’t say they were pleased with the deaths of some of the major characters this year so far, but the writers did these things to create a journey for Sookie. The story’s about Sookie. Everything that happens, even if it is sad, is right and good.

Melissa Parker (Smashing Interviews Magazine): Riley Smith who plays Keith, the new vampire, stated that there were so many intricate things about those mythical beings that he didn’t know. What are some things you’ve learned about vampires while doing True Blood?

Carrie Preston: Every show has a different folklore, so you have to kind of learn the language of each show and each mythology of the supernatural characters. Our show is no different. This year in the direction of Arlene, there are the Hep-V infected vampires, and so we had to learn what the Hep-V does to the vampires, how it affects them, how it affects some differently than others. I think the mythology has grown and changed over the seasons to incorporate the storylines.

Melissa Parker (Smashing Interviews Magazine): Is it primarily the “bad boy” image that has contributed to the explosion of vampires in pop culture over the last few years?

Carrie Preston: In simplistic terms, the modern vampires are sexy and gorgeous, and I think people are obsessed with that. They also like the idea of a creature that can live forever, and they like to live vicariously through them. Most of the romance that happens in the modern-day vampire stories make people feel how it would be like for them if a 3,000 or 5,000 year old vampire picked them to love out of all the people they’ve known over all the years, so there’s something very appetizing about that.

Melissa Parker (Smashing Interviews Magazine): What are some of your favorite scenes or storylines over the entire run of the show?

Carrie Preston: I loved the storyline with the baby when I was afraid that my baby was possessed by my dead fiancée (laughs). That made for some really fun, interesting and extreme situations. Although it was sad, acting wise I was very challenged by last season’s death of Terry. Just as an actor, I enjoyed having that to play even though it was at the expense of a brilliant actor who we all miss and were very happy to have back even for just a moment this season in episode four.

Melissa Parker (Smashing Interviews Magazine): In True Blood, there has always been an underlying theme of possibly racism, equal rights, and there is a romantic gay storyline. Do you feel that these issues should have been brought more to the forefront?

Carrie Preston: What I think a great thing about our show is that you can look at it on two levels. You can look at it as popcorn for adults, pure entertainment, or if you want to read in any kind of social interpretations, you’re welcome to do that, too. It doesn’t hit it over the head.

It finds a nice balance because you can substitute any disenfranchised group of people for the vampires, and you have a metaphoric overlay. I think that’s what makes it great because if it were to hit things over the head, it might not be as palatable or as interesting. The way the show handles diversity in all ways, shapes or forms is great and important, and I definitely stand behind it.

Melissa Parker (Smashing Interviews Magazine): I believe that the state of Alabama holds a particular significance for you. It was where you met future husband, Michael Emerson.

Carrie Preston: It was!

Melissa Parker (Smashing Interviews Magazine): What attracted you to Michael?

Carrie Preston: His talent. I saw him on stage before I even talked to him and was smitten by his talent. Then the minute I met him, I was just enchanted by everything about him (laughs). He’s quite a gentleman, very articulate, very kind and obviously talented. That was what drew me to him, and then it kept deepening as we started getting to know each other better. Now we’ve been together twenty years.

Melissa Parker (Smashing Interviews Magazine): I don’t suppose Michael shows up on the final episode and sweeps Arlene off her feet?

Carrie Preston: No, unfortunately, it never worked out (laughs). Our schedules are so opposite. Everybody wanted that to happen, but we couldn’t swing it.

Melissa Parker (Smashing Interviews Magazine): You will be returning as Elsbeth on The Good Wife. Do you know if there will be any changes in the character?

Carrie Preston: No. I have no idea. That’s all still being discussed, so I’m not really sure.

Melissa Parker (Smashing Interviews Magazine): You have been described as a chameleon actor who not only plays the part, but becomes the character throughout the project. How do you prepare for each new role?

Carrie Preston: I always start with the script. We have a saying in the business, “If it ain’t on the page, it ain’t on the stage.” In other words, if it’s not written down, it’s going to be very hard for it to leap up off the page and be fleshed out. I always spend a great deal of time with the words and trying to use that as a map or a guide to help me figure out where I’m going to go. Then everything comes from there. That’s really my method.

I will take cues from the cast and will just start building everything else from there. There’s a lot that happens once you arrive on stage or on set and you start interacting with the other actors because that has just as much to do with what you’re doing with your role as the work you’ve done on your own.

Melissa Parker (Smashing Interviews Magazine): Are you interested in starring in another series, perhaps a sitcom this time?

Carrie Preston: I always think of myself as providing comic relief within the drama, and I’ve done a lot of comedy in the past. I would certainly not say “no” to a comedy. I’m a fan more of the single camera half hour shows as opposed to the four camera traditional sitcoms just because they’re a little bit more like shooting a movie or an hour, and I like that way of shooting. The writing on them maybe tends to be a little more interesting, but I wouldn’t say “no” to any of it.

At this point, I really do want to get on another series. I could never dream of what that might be, but I trust that something great is going to come along, and hopefully it will afford me the opportunity to live with a character more than just a few episodes. That’s a very rare thing sometimes, but it certainly happened with True Blood and even with The Good Wife to some extent. Even though I recur on that show, I’ve done something like ten or eleven episodes. I just really like the idea of playing a character for a long time.

Melissa Parker (Smashing Interviews Magazine): You have the film, Life Itself, coming out this year with Morgan Freeman and Diane Keaton?

Carrie Preston: I did a couple of scenes in that film, yeah. I was a huge fan of Diane Keaton, so when the offer came in, they were like, “It’s just a small part.” I said, “I don’t care. I want to work with Diane Keaton.” She has been a hero of mine, so that was a great experience just being on set with her for a couple of days.

Cynthia Nixon is in the movie, and my first Broadway gig was understudying her, so I’ve known her socially for many years. It was fun to work with her again, and then of course, meeting Morgan Freeman was a highlight as well.

Carrie Preston: I’m going to be doing a guest spot on Getting On which is an HBO half hour single camera comedy starring Laurie Metcalf. Their first season was this past year. They did six episodes, and now they’re shooting a second season, and I’ll be doing one of those episodes. I start shooting that at the end of this month, and I’m looking forward to that.

I have my web series that I direct called Darwin: The Series. We’re in post for episodes four through twelve of the first season. The first three episodes are out, and then the rest of the season will be out in September. I’m busy doing that and just enjoying being back in New York with my husband.

Melissa Parker (Smashing Interviews Magazine): Carrie, what does True Blood mean to you, and what will you miss most about the show?

Carrie Preston: It has definitely changed my life because it had such a huge impact on the industry and on pop culture. It was really fun to be a part of a show that was that much loved. I’m going to miss the people the most.

We have seven years of friendship in that show, and we’re at a bit of a low morale wise that it’s over, and we all have to go on to other things. I think a lot of us are really feeling the loss of it already, and we only just recently wrapped. That’s going to take time.