We Asked Roger Stone If He'd Get a Trump Tattoo 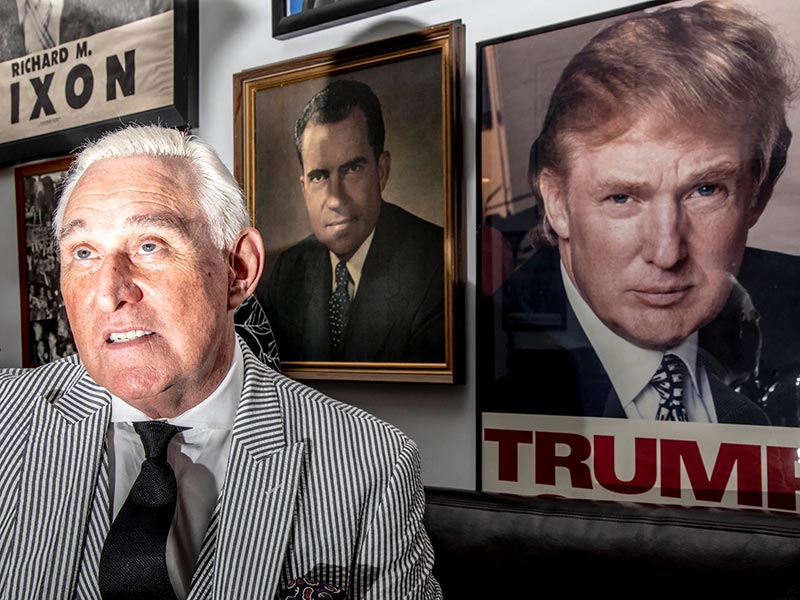 Political consultant, lobbyist and strategist Roger Stone has played a key role in the election of Republican presidents from Richard Nixon to Ronald Reagan to George H.W. Bush and George W. Bush. He also served as an assistant to Sen. Bob Dole.

Stone served as an advisor to the 2016 presidential campaign of Republican candidate Donald Trump. He left the campaign on August 8, 2015, but remained a Trump confidant.

In November of 2019, Stone was convicted of all seven counts in a federal indictment that accused him of lying to Congress, witness tampering and obstructing the House investigation into whether the Trump campaign coordinated with Russia to tilt the 2016 election. Stone was sentenced to serve a 40-month term.

In July of 2020, then-President Trump spared his former campaign advisor by commuting his sentence just days before Stone was set to report to a federal prison to begin his stretch.

He has authored such books as The Man Who Killed Kennedy: The Case Against LBJ; Nixon’s Secrets: The Rise, Fall and Untold Truth about the President, Watergate, and the Pardon; The Clintons’ War on Women and Jeb! and the Bush Crime Family.

In a 2016 interview with Smashing Interviews Magazine, Stone (who has a famous tribute tattoo of former President Richard Nixon's smiling face in the middle of his upper back, directly beneath his neck) was asked if he would ever add an inking of Trump alongside Nixon.

"It is unlikely. I’ve got Nixon right in the middle of my back, but the reason I did that was, at some point, so that I could add Goldwater, Reagan and Buckley for a conservative Mt. Rushmore," Stone responded.

When asked in the Smashing Interview why he had never run for political office, the political trickster had the following to say.

"Too many skeletons. I like wine, women and song far too much," insisted Stone.