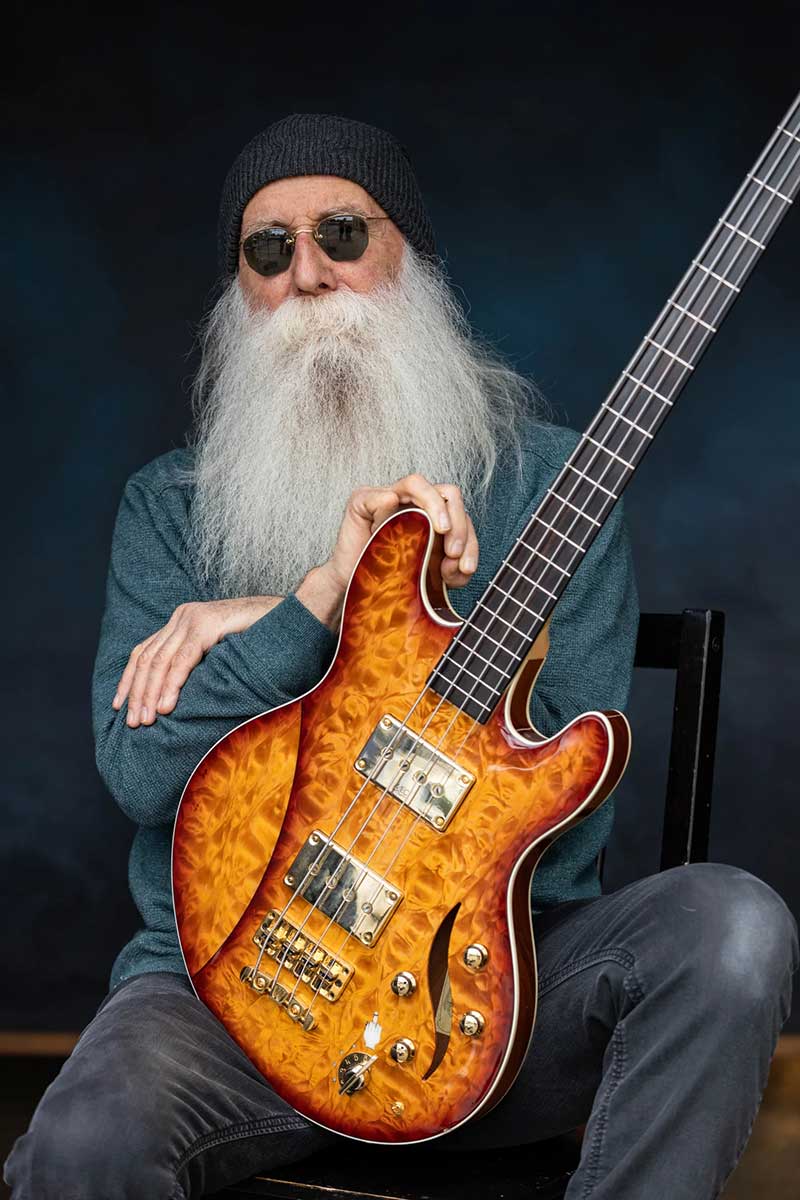 Sklar was a member of the Los Angeles-based instrumental rock/jazz fusion group The Section, which served as the de facto house band of Asylum Records and was one of the progenitors of the soft rock sound that was predominant on top-40 radio during the 1970s and 1980s. He has toured with major rock and pop acts and recorded many soundtracks to films and television shows.

Available for order is Sklar’s unique, 320-page picture book entitled Everybody Loves Me. The “coffee table masterpiece” is filled with thousands of unique photos of celebrities, fans and people from all walks of life flipping him off. The photos capture the personality and character of the people Sklar has met while touring with some of the biggest artists in the music world. The book can be purchased directly from Sklar’s website in either autographed or non-autographed editions.

In an interview earlier this year with Smashing Interviews Magazine, legendary bassist Leland Sklar explained why, for the last 16 years, he has photographed folks from all walks of life engaged in the act of flipping him off.

This is the story in Sklar's own words of how Everybody Loves Me, the compendium of those events, came to fruition:

When we were on the road in 2004 with Phil Collins, we were doing the First Final Farewell tour. There was talk later in the tour that Phil was probably going to call it quits at the end of the tour and retire. We had about a hundred crew people on the road. His tours were really big, big tours. I thought that I might not see a lot of those people again if he called it quits because they were from all over Europe and the States.

They hired a bass tech for me named Steve Winstead, but his nickname was “Chinner.” I think he came into the tour off of a tour where he was working his ass off. We had never met, and he came to me and said, “What do you need, man?” He was pumped and ready to go. I said, “Not anything really. I’ve never had a tech before. I’ve always done my own gear.” I could see his spirits drop. We were out for a long time, so Chinner ended up becoming kind of a general guy on the tour. He’d help the singers, the percussionists, just do a little of everything, and he would do a few things for me. At the end of the tour, I thought, "I’m going to take a picture of everybody and just have a little memory book from this tour.” The first person I go up to is Chinner. He’s sitting at his laptop typing something, and I go, “Hey, Chinner, give me a smile,” and all he does is give me the finger. It was a loving finger, but it was still the finger. I looked at it and went, “Ooh, ooh, this is kind of cool.”

So I went and got Phil, his manager, all the band and the crew, the truck drivers and everybody on the tour, and I had about 115 pictures. After that, I went on the road with Toto. I’ve known Steve Lukather since he was 19 years old, so I called the guys, and they were very happy to give me the finger. It was up to about 300 pictures. I’ve been a voracious collector my whole life. All the years of touring, I never drank or did drugs, so I would carry empty road cases with me, and I’d be out just wandering the towns and looking for junk shops while everybody slept in. This all just turned into that kind of a situation where I’d do the trade shows, the NAMM show here in LA, and people started coming up and giving me the finger.

I’ve got a little over 12,000 photographs of everybody imaginable giving me the finger: from the gas company guy, the guy working in my basement to the people that work in the grocery store. It’s not just about musicians and celebrities. I was at a party for a Pasadena artist and also a world famous artist named Kenton Nelson. I went as Van Dyke Parks’ date (laughs). I ended up meeting Kenton, so he started inviting me to these parties he would have every six weeks. The last one before Covid, I was talking to one of the guys there who was in the art publishing and reproduction business named Richard Trimarchi, and his nickname is “Blue.” I told him about the pictures, and it got him going. We ended up hooking up and pretty much did the book together. We’d sit there and go through pictures. See, 6,000 didn’t make the book that are all as good as everything in the book.

I had been taking these pictures for so long that people would say that I had to do a book. But I never really had time or inclination to do it because I’ve been busy with my real profession. Suddenly, this opportunity came along, and I thought that if I didn’t do it now, it’ll never happen. Blue and I talked through so many things just to make the book as high end as we could. It’s a pretty substantial book in terms of the quality of paper and print. Also I look at this as every person. That’s why I didn’t designate a section of celebrity or anything like that. I really wanted this to be a humanity book. So you’d see a person on the street, and suddenly, there’s Jay Leno next to them.

I would say that out of the 12,000 pictures I got, I probably had 20 people refuse. Most people jumped on it. There’s a bass player I know, and she said, “No. It’s against my religion.” I looked at her and said, “What religion are you that bans the finger?” (laughs) Then when she saw all the other bass players doing it, she said, “I’ve changed my mind.” I said, “I did, too. You’re not in the book.”

But most people actually were very enthusiastic about it. The funny thing is I’ve got the nun in the book early on in the first few pages. She was my wife’s mother’s cousin, and her sister was also a sister, so they were sister nuns. Her sister was so depressed because her arthritis was so bad, she couldn’t give the finger. And the one who’s in the book, I asked, “Do you mind giving me the finger?” She said, “I was a high school principal. I have no problem giving you the finger.” (laughs) She spent her whole life as a nun. The only thing I didn’t want in the book was politicians. That was where I drew the line.