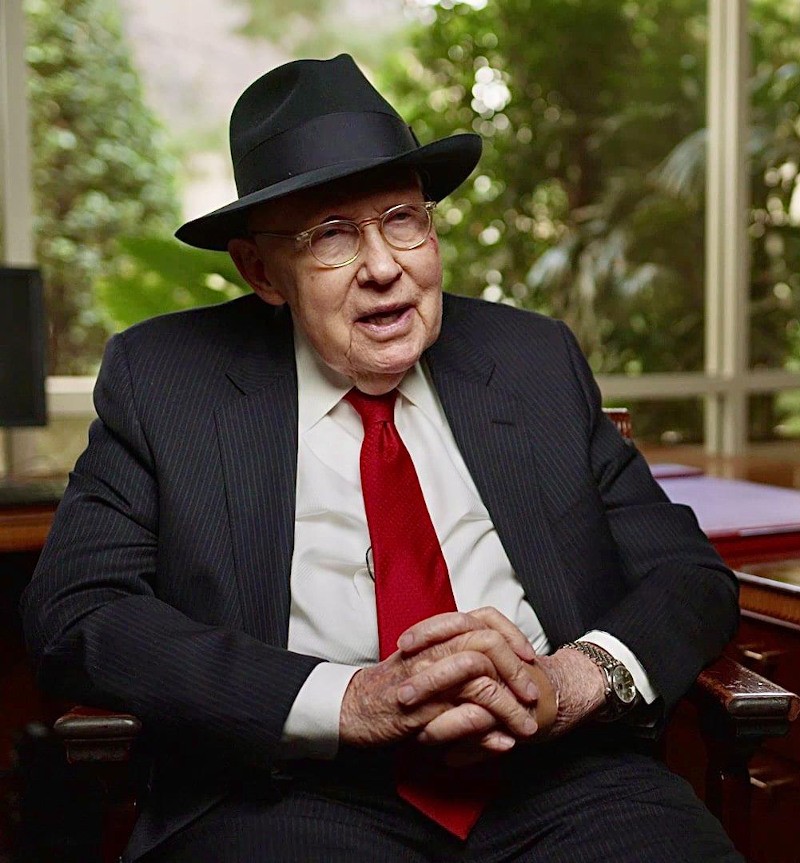 Born on December 2, 1939, in Searchlight Nevada, former Senate Majority Leader Harry Reid served 30 years in the Senate from 1987 until his retirement in 2017. He served as lieutenant governor of Nevada from 1971-1974 and was chairman of the Nevada Gaming Commission from 1977-1981. Senator Reid has been a major advocate of land conservation in Nevada over his political career and successfully secured the designation of about 5.1 million acres of federal land in Nevada as protected land, shielding them from development. In 2015, he received a lifetime achievement award from the League of Conservation Voters.

A special 90-minute documentary from Earth Focus called The New West and the Politics of the Environment is told through the eyes of Senator Reid as he forced allegiances between unlikely allies and created policy to grow the economy of his home state while protecting its wilderness, and in the process redefined the future of the West. The film will premiere in Southern California on September 29, 2020, in Los Angeles on KCET, nationwide in the U. S. on September 30, 2020, on Link TV and October 4, 2020, on WORLD channel. A special airing in the Las Vegas region will take place on November 23, 2020. Earth Focus is the longest running investigative environmental news program on U.S. television.

"Donald Trump believes that climate change is a hoax. That’s his favorite word. He doesn’t believe there’s climate change. In California, he said what they should do is sweep the floors of the forest. Can you imagine anything so inane as that?"

Smashing Interviews Magazine: Senator, how are you doing during the pandemic?

Senator Harry Reid: I’m doing okay, staying away from everybody as much as I can.

Senator Harry Reid: Yes, especially with big families, you know. My grandchildren are afraid to come over.

Smashing Interviews Magazine: We all wish our lives were back to normal. As a boy living in Searchlight, Nevada, what did you dream about doing when you grew up?

Senator Harry Reid: I dreamed about getting out of Searchlight (laughs).

Smashing Interviews Magazine: (laughs) The late Nevada governor Mike O’Callaghan once described you as “shy and awkward” when he met you in high school. So where did that resolve and determination come from that was necessary to move Nevada away from coal, fight for protected lands and to bring various groups in the state together around environmental concerns?

Senator Harry Reid: He was a terrific teacher. He taught me my senior year in high school until we ran for governor and lieutenant governor independently. We were both elected. But we had a good run together. I’m very fortunate. I came from Searchlight to what I thought was a huge place in Henderson and went to school. I wasn’t dressed the way the others were, my hair was different than the others, but people were very nice to me. The kids were nice to me. So I didn’t feel different from the others. I fit in pretty well. I played sports. I was no star athlete, but I made the teams and enjoyed my teammates very much. I was elected student body president, so they accepted me.

But the most important election in my life was in my junior year when I was elected junior class treasurer. That doesn’t sound like much to anybody, but for me, it was really a big deal. I had finally been accepted by my classmates.

Smashing Interviews Magazine: The film is very well done, informative and entertaining. The executive director, Jon Christensen, calls the pragmatic, piecemeal approach you’ve taken in Nevada a “lowercase green new deal, which stands a better chance of succeeding in purple states." What are the basic differences between the “lowercase green new deal” and the Green New Deal proposed by progressives?

Smashing Interviews Magazine: A cute moment in the film was where Joe Biden told you he loved you but said he knew that would embarrass you. Did it?

Senator Harry Reid: Joe Biden is such a nice man. I have such admiration for him. He overcame stuttering. When he started elementary school, he couldn’t talk. He overcame that. He was a good athlete in college. He overcame his stammer. He became a senator, and just a few weeks after the election, his wife and little girl were killed, and his two boys were hurt. He and his sister raised those two boys that survived the accident. He had brain aneurysms. He overcame that. He’s just a fine man. I just have great admiration for Joe Biden as a person.

Smashing Interviews Magazine: Environmentally speaking, what’s the next step that should be taken in Nevada?

Senator Harry Reid: I think the next step that needs to be taken in Nevada and around the country is to recognize we’re in a crisis. These fires burning in California don’t just happen to be there. Because of the climate situation, we have forests that are drier, and they’re getting less moisture. We have to do something about it sooner rather than later.

Smashing Interviews Magazine: How has the Trump administration harmed the environment in this country?

Senator Harry Reid: Donald Trump believes that climate change is a hoax. That’s his favorite word. He doesn’t believe there’s climate change. In California, he said what they should do is sweep the floors of the forest. Can you imagine anything so inane as that? Sweep the floors of the forest? He is someone who has done his best to bring the United States of America back to the dark ages on the environment. He got rid of the Paris Climate Accord, and he has done everything he can to wipe out the things that were done in the Clinton and Obama administrations. He has just been a ravaging person in the wrong direction for the climate situation.

Smashing Interviews Magazine: Have you read the climate plan the Senate Democrats rolled out recently? They hope to pass it if they win the presidency and take control of the Senate in November, but what are the odds of that happening?

So I think Biden’s going to come into the presidency controlling the House and the Senate. I think he will be able to get a lot done. They can attack climate for the first time. I think it’s not a question of if the filibuster is going to be gone. It’s a question of when it’s going to be gone. You can’t have a country where 60% of the vote is needed on any piece of legislation. That just won’t work anymore.

Smashing Interviews Magazine: It’s difficult to believe that Ruth Bader Ginsburg is gone after serving more than 27 years as an Associate Justice of the Supreme Court.

Senator Harry Reid: Oh, you know, I had such admiration for her. Here’s a woman who had everything stacked against her, being a woman, a mother and Jewish. But she was able to overcome all of that. She had a brilliant mind that no one could set aside. She was first in her class. She was just absolutely a phenomenally brilliant woman. What she did as a young woman, American women are so much further in equality that they would not have been if it wasn’t for her.

Smashing Interviews Magazine: It appears the Republicans will have the votes for Justice Ginsburg’s replacement. Nancy Pelosi said that she has options and hasn’t ruled out impeaching Trump again in order to delay a battle over his upcoming Supreme Court nomination to replace her. What can the Democrats do?

Senator Harry Reid: I think they have the votes, and some of the people that said they wouldn’t do this are hypocrites, Lindsey Graham, Senator Grassley and others. They want to jam this through. But they should understand that Democrats can, if they take the Senate, also change the number of people who serve on the court. A lot of things can happen. A simple majority vote is all it would take.

Smashing Interviews Magazine: What is the achievement you’ve been the proudest of over your career?

Senator Harry Reid: Oh, I don’t think I can answer that. Somebody else would have to look at that. I feel very fortunate that I was able to be elected to the Senate and then to be the Leader of the Senate. No one ever thought I’d do that, I’m sure. Looking back, I’m just fortunate to have had the opportunity to do what I did.

Every day of the 34 years I spent in the Senate in Congress was enjoyable and educational. But that was then, and this is now. So I just have to try and change things in a different way now because I believe there’s still a number of things to be done.

Smashing Interviews Magazine: So, no regretting the decision not to spend your career as a practicing attorney instead of a politician?

Senator Harry Reid: No. No. I was able to use my legal training. I think it was a big help to me in Congress. No one had ever been to law school in my family or in my neighborhood in Searchlight. I’m glad I went to law school.

Smashing Interviews Magazine: Are you still very much involved in the politics of Nevada from behind the scenes?

Smashing Interviews Magazine: What do you have to say about Barack Obama?

Senator Harry Reid: Every morning, I get up and the first thing I do is take a large cup of water and drink it. On that cup is a picture of Obama, and it says, “Do you miss me yet?” Yes. I miss him a lot. Barack Obama is one of the finest human beings that I’ve ever had any dealings with or have known about. I worked with him eight years when he was president as his go-to guy in the Senate, and I think we were able to do some good things together.

I would call him saying, “I can’t get the votes through.” He would say, “It’s more important than my re-election. You go ahead and keep working on it.” I like him because he’s not a pushy man, he’s very intelligent, he’s very kind, thoughtful and considerate. I never heard him say a bad thing about anybody. He’s just an exemplary human being as far as I’m concerned.

Smashing Interviews Magazine: What can each of us do, Senator, to start seriously saving the planet?

Senator Harry Reid: The first thing we have to do is vote.Vote. I do believe, as I said, that it’s going to be a change election. We’re going to beat Trump and take the Senate and build the majority in the House. I think it’s going to set a standard for the future of this country that will be written about for generations to come.

Smashing Interviews Magazine: Do you have any last words about the film?

Senator Harry Reid: I’m glad they decided to do a film about me. I think the environment is something we all need to be concerned about. By the way, I haven’t seen the film, but I will look at it. They asked me if I wanted to see it beforehand, and I said, “No.”

Smashing Interviews Magazine: Well, no doubt you will enjoy it. I appreciate your taking the time, Senator.

Senator Harry Reid: Thanks for allowing me to be with you.

« James Keach Interview: Famed Filmmaker Focuses on Unsung Heroes of Fight to Cure Alzheimer's
Noam Chomsky Interview: "We Have a Sociopathic Maniac in the White House" »