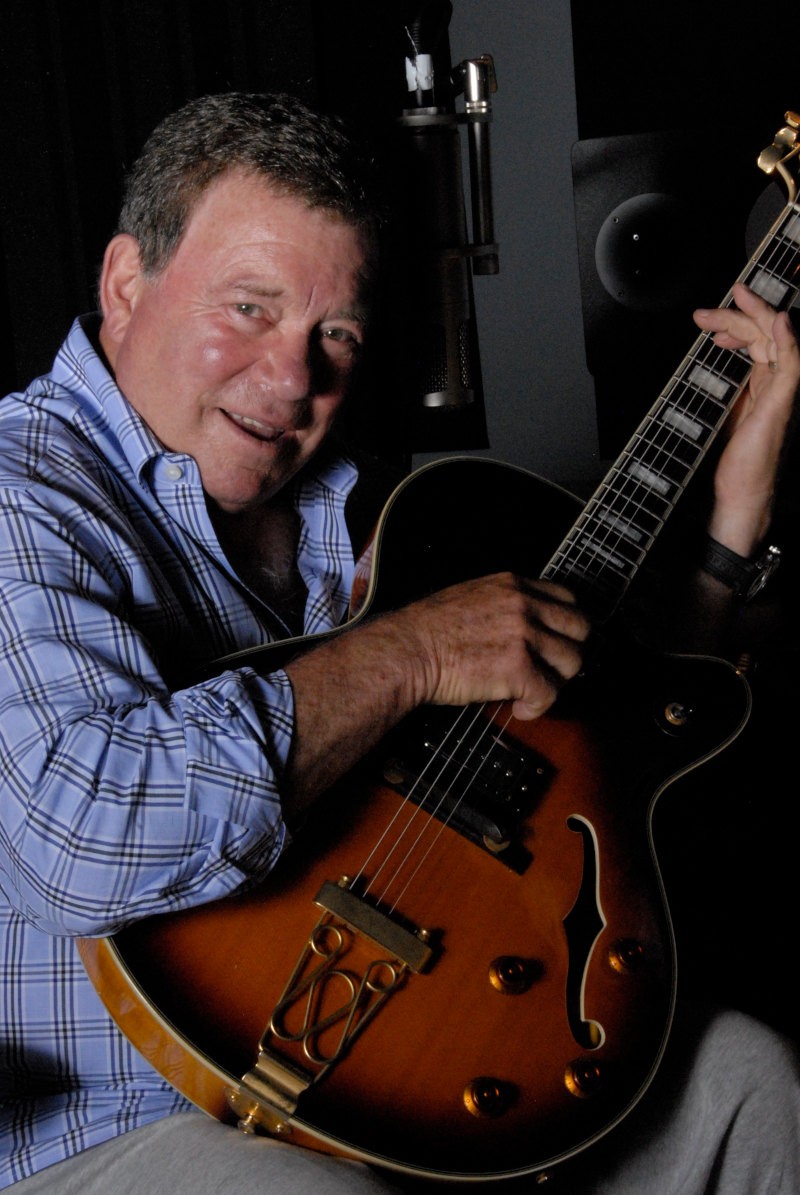 In seven decades of acting, William Shatner has portrayed numerous characters on television, in film and theater. He became a cultural icon for the portrayal of Captain James T. Kirk of the USS Enterprise in the Star Trek media franchise. He starred in the police drama T.J. Hooker, hosted the reality based television series Rescue 911 and starred as attorney Denny Crane in the final season of the legal drama The Practice and in its spinoff series Boston Legal, a role that earned him two Emmy Awards.

Shatner began his musical career in 1968 with the spoken-word album The Transformed Man, which delivered exaggerated, interpretive recitations of popular songs like “Mr. Tambourine Man” and “Lucy in the Sky with Diamonds” paired with readings from famous plays. He has recorded many albums since that time. His latest, The Blues, was released October 2, 2020, and is a collaboration with Canned Heat, Ritchie Blackmore, Brad Paisley, Pat Travers, Sonny Landreth and more.

"I don’t believe I talked music with Leonard at all. But we were given the opportunity, as a result of the celebrity that we garnered because of Star Trek, to express ourselves musically."

Smashing Interviews Magazine: How are you coping during the pandemic?

William Shatner: Well, I’m embarrassed to say I’m okay. I have a large home for just Elizabeth and me, and I’m able to get in my car and go visit my horses 45 minutes away. I’m publicizing my album. I’m riding horses. I see my children one on one. I’m finding that the advice I give people (which it’s awfully easy to give advice) I’m using myself, and that is (since most of us have time that’s foisted on us), I’ve used the time to focus on things that I didn’t have time for prior to the pandemic.

Smashing Interviews Magazine: For your latest album, The Blues, were the songs or the musicians chosen first?

William Shatner: I did a Christmas album for Cleopatra label, and it went very well and sold a lot of copies last year. So they asked me to do another one and suggested the blues. I come from Montreal. I’m a Canadian from Montreal that came down to the States. I knew very little about the blues and its history. Montreal’s a very musical town, and I had heard a lot of music when I was growing up due to a number of circumstances. But I didn’t know very much about the history and the reverence in which the blues is held by musicians.

So I decided I would do a blues album, but I really went back to basics. I read a lot. Some musician friends helped me and gave me books to read, and then I began to talk to people who were blues musicians. One man, in particular, came into my office. He was about 75 years old, and he told me he picked cotton and sang songs in the fields. I asked him to show me how he did that, and he mimed picking cotton and singing. So I got a brief insight into the antecedent of the blues. Then in talking with people and consulting with a lot of expert people, I chose the songs along with a lot of good advice. I wanted them to be some of the basic songs. I needed a strong lyric.

So I laid the tracks down first. And then several of the great artists who are on the album with me have been on other albums of mine, so we contacted them and said, “Would you like to be on this? Here’s a track.” Many of them came aboard. It was quite an honor. I’m working on another album right now, and some of them have offered to come aboard that one as well. So it’s been quite an honor to get these great musicians to say they would like to accompany me on this musical journey.

Smashing Interviews Magazine: Brad Paisley sings “Sweet Home Chicago” on The Blues, and he also wrote some songs for your album Has Been (2004), and singer-songwriter Ben Folds produced the record.

William Shatner: That’s right, and Ben Folds is a genius musician and producer who did this album called Has Been, and I’m very proud of it. He’s such a great artist.

Smashing Interviews Magazine: Did you know Ritchie Blackmore before his collaboration on The Blues?

William Shatner: He was on another album of mine, and then he’s on this one along with his wife Candice. I can’t say we’re friends at this point, although I would look forward to that. But he wants to be on the next album, and so it’ll go along. I will be in their presence sooner or later, hopefully sooner when this is over because I’d like to visit with them. I don’t know where they live, but I would certainly like to be in the same studio with Ritchie.

Smashing Interviews Magazine: “The Thrill is Gone” became a major hit for B.B. King. So how did you make all of these songs your own?

William Shatner: As you know, all of these songs are classics, and I wanted to do the classics just to, I guess, prove it to myself. But if you take B.B. King’s song, he did the perfect rendition of “The Thrill is Gone.” When I laid down my track, first of all, I sounded too much like him. I was trying to imitate B.B. King, which wouldn’t work. So I came back into the studio and re-recorded the song. I think that was one of the first songs I laid down.

But I had to remind myself that what I was doing was looking into the drama of the song and not singing it per se. So every one of those songs is like an acting scene where I can see what the song means and what the person is doing, and it becomes like a moment in a character. So “The Thrill is Gone” is obviously about a love affair that’s dissipated and how sad it is that the passion of that moment is gone. That’s what I’m reminded of and what I focused on, that the emotion of the song is almost nostalgia.

Smashing Interviews Magazine: Leonard Nimoy made some records over the years, as did other Star Trek alumni. Did you guys ever discuss making music during your time on the series?

William Shatner: No, not really. I don’t believe I talked music with Leonard at all. But we were given the opportunity, as a result of the celebrity that we garnered because of Star Trek, to express ourselves musically. So I have chosen to do this, and I’ve been fortunate enough to be asked to do it again and again.

Smashing Interviews Magazine: Is making music as fulfilling to you as an artist as portraying characters on television and in film?

William Shatner: Yes. Yes, it certainly is. I’ve been on tour as a singer of these songs. I’ve gone on a few nightclub dates. I was with Ben Folds at one of his concerts here in Los Angeles and performed one of the numbers. I’ve forgotten which one, but that’s all we had rehearsed. When we finished the number, and it was the last number of the set, the people went crazy and started applauding. We had to leave the stage, and finally I left the building in a car, and they were still applauding. My daughter, who was there and who was very appreciative of the irony of the event, said it was like “Elvis has left the building.” It was cute. It was funny.

Smashing Interviews Magazine: Is there anything you would like to do professionally that you have not done yet?

William Shatner: No. Well, if you’re asking me if I have a passion for something I haven’t been able to do, no. But so often something is suggested that I will say, “Oh, I’ll do that,” and it becomes an interesting project. There are several of those in the works, but nothing yet. But when it comes about, I’ll let you know.

« Paul Carrack Interview: From "How Long" to "Living Years," a Timeless Voice
Jonathan Alter Interview: Authoring Carter Biography Was an Escape from the Toxicity of Trump »