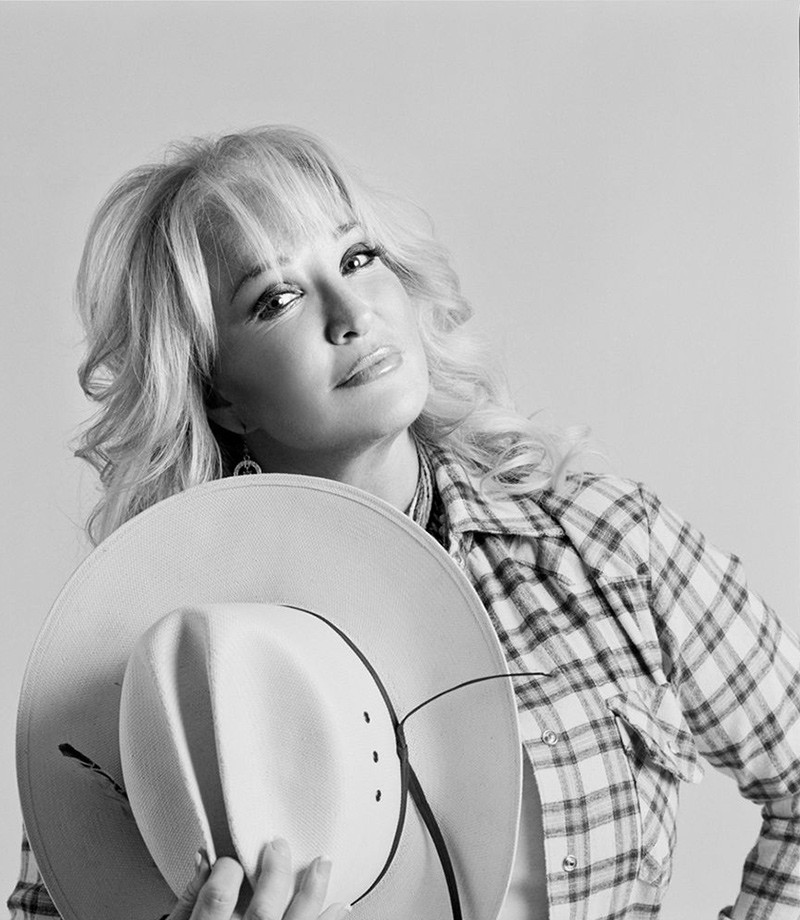 While still a teenager, Tanya Tucker became a country music icon since first recording Alex Harvey’s classic “Delta Dawn." Since her 1972 debut, Tucker has enjoyed an incredible career that garnered her four Platinum albums, eight Gold albums, several County Music Association award nominations and hit songs such as 1973’s “What’s Your Mama’s Name?” and “Blood Red and Goin’ Down,” 1975’s “Lizzie and the Rainman,” and 1988’s “Strong Enough to Bend.”

Two years into her singing career, Tucker appeared on the cover of Rolling Stone, a rare national media spotlight for a country star in 1974. In 1980-81, she dated singer Glen Campbell, twenty-two years her senior, and their fiery, tabloid-filled relationship ended in acrimony. The country singer detailed her colorful life in her 1997 autobiography, Nickel Dreams: My Life, and starred in her own reality show, Tuckerville, on cable network TLC. At almost fifty-seven and after taking some time off, Tucker is now hitting the road again with a new tour to conclude in December of 2015.

"Starting out, my dad always said to pick out the homeliest, ugliest little kid on the first row, look at him and smile at him because he’s the one that’s going to buy the records. He’s the one that’s going to come see your show because he don’t get it any other time. He said that all those good looking ones are not as faithful and loyal. I think that can be taken in a bigger way, and you just have to treat people that way. Everybody wants to be important. My dad said if you could make them feel important for just a moment, you’ve done a lot."

Tanya Tucker: It’s going good. We’re in the beginning stages, so we’re tweaking it here and there. It’s not anything like it’s going to be, but hey, you’ve got to start somewhere. So we have started.

Melissa Parker (Smashing Interviews Magazine): Many critics say that you’re back better than ever!

Tanya Tucker: Well, I don’t know about that, but we’re working toward it. I’m always never satisfied, but I am definitely working toward that perfect show.

Melissa Parker (Smashing Interviews Magazine): Is the show different than in the past?

Tanya Tucker: It’s just me, my songs and the audience … and a new band. So there you go. Right now it’s pretty basic. I was out for four years and didn’t think I was going to come back. But I sort of had no choice really because the fans wanted to see me. They want me out there, so here I am. I’m doing it. But it’s never good enough. I always want it to be better.

Melissa Parker (Smashing Interviews Magazine): Were those first couple of shows difficult for you?

Tanya Tucker: God yes! Yes. It was difficult because of a new band. I mean, I’ve got my part down pretty much (laughs). I know what to do when I’m on stage, but it’s just having the right band and getting the right guys in the band. When we do that, then we can go to the next level and start doing some things involving video and things like that. Right now we’re just trying to get it right.

Tanya Tucker: No, not really. If the band learns a new song, it’s one of my old ones.

Tanya Tucker: Yeah. I’ve got a new album that I hope to have out by the first of the year since I’ve got many other things I’m involved in doing right now like getting into a new home and getting my stuff in a new warehouse which is ten thousand square feet. You know, where do you put that? So it involved a lot of work and a lot of people helping to get it done. Once we get all that done, I think we can work on the music. Just kind of taking baby steps right now.

Melissa Parker (Smashing Interviews Magazine): What will be the direction of the new songs?

Tanya Tucker: Oh, it’ll always be me. It’ll always be me, but maybe a little edgy at times. I pretty much can sing anything that I want. I like to sing all kinds of things. But yes, we’re going to be doing some research, and when I say research, that means going out and doing it to see if it works. Sometimes you just don’t know until you go.

Melissa Parker (Smashing Interviews Magazine): Is “The Star Spangled Banner” difficult for you to sing?

Tanya Tucker: Well, yeah, but I’ve done it a lot, and it just rolls off my tongue. I don’t have a hard time with it. A lot of people do, but not me. I enjoy singing the song. It makes me feel very patriotic.

Melissa Parker (Smashing Interviews Magazine): I have to say that my favorite is “Delta Dawn.”

Tanya Tucker: That’s my favorite, too. Always will be.

Melissa Parker (Smashing Interviews Magazine): You were thirteen years old when you recorded “Delta Dawn” and became a sensation. The lyrics are so mature. Why did you choose that song?

Melissa Parker (Smashing Interviews Magazine): Did you realize at a young age that you were a special talent?

Tanya Tucker: At that time, no. I didn’t think about it because all I saw was hard work and going through kitchens in back doors. Never saw a front door, was just sliding through kitchens in Las Vegas, and then going to the stage and doing three and four shows a night. No, I didn’t think I was a star. That’s for sure. It was hard work, and I thought I was just slaving away. But every little bit helps, you know. What I did added up. You meet that one person and give them a smile or shake their hand, and they won’t forget that. I’ve done that a lot (laughs).

Melissa Parker (Smashing Interviews Magazine): You were also interested in acting when you were young. Do you regret not pursuing that more seriously?

Tanya Tucker: I don’t regret it. I think it could’ve been a bigger deal than it was. But there are a lot of things that could’ve been bigger. I wish I’d done that. I wish I’d done this. I’m in that forward mode now. I don’t even think about the past. If I do, I have to reflect on it and leave it because I don’t want to stay there too long. I want to move forward, but learn from my mistakes twice or fifteen times, as in my case (laughs).

Melissa Parker (Smashing Interviews Magazine): What are some of your secrets to longevity in the music business?

Tanya Tucker: I think it’s just to treat your fans like you’d want to be treated. Treat them with respect. Starting out, my dad always said to pick out the homeliest, ugliest little kid on the first row, look at him and smile at him because he’s the one that’s going to buy the records. He’s the one that’s going to come see your show because he don’t get it any other time. He said that all those good looking ones are not as faithful and loyal. I think that can be taken in a bigger way, and you just have to treat people that way. Everybody wants to be important. My dad said if you could make them feel important for just a moment, you’ve done a lot.

Tanya Tucker: Over and over putting everything I had into it, like Woodbury soap wouldn’t wash it off (laughs).

Melissa Parker (Smashing Interviews Magazine): Did you get a chance to speak with Glen Campbell before his illness progressed to the latter stages?

Tanya Tucker: No. His wife won’t let that happen. I’ll just have to live with my memories. She can’t take them away.

Melissa Parker (Smashing Interviews Magazine): Who do you listen to these days, Tanya?

Tanya Tucker: Oh, let’s see. Chuck Cannon. I love listening to him. When I’m in the car, I just don’t turn anything on. I like to do a lot of praying and talking to the good Lord. That’s when I can really talk to Him, and I don’t like a lot of radio on. But if I do, I listen to Merle Haggard, Huey Lewis and the News and Eric Clapton. I love Eric Clapton’s blues stuff especially. That’s all I can think of right now.

Tanya Tucker: Yeah. I’m the only female, I guess, or one of the few. I told Gretchen Wilson that she needed to come up a little bit so she can be one of the outlaws. I don’t know how I got that, just doing crazy things I guess. I just get by with doing things that everybody wants to do, so they just vicariously live through me.

Melissa Parker (Smashing Interviews Magazine): Being a female in country music, you probably also need to be a bit aggressive.

Tanya Tucker: We can’t be too aggressive. They’ll think you’re a bitch, you know. I just want them to think I’m a baby (laughs). Nobody wants to do anything for a bitch, but if you, “waa waa waa,” they might do something for you.

Tanya Tucker: My daughter, Presley, and another girl named Spencer have a group called Reverie Lane Band. You should look them up on You Tube. They’re really hot. My youngest daughter, Layla, was going to be in the group, but I decided to let her focus on getting her high school education. But Layla’s definitely going to be a singer. She’s got it all over her. She’s sixteen now and just trying to get through these critical years where she can make music. My son, Beau Grayson, works with me and looking for a career in music.

Melissa Parker (Smashing Interviews Magazine): Any other projects you wish to discuss?

Tanya Tucker: I tell everybody about the dolphin project because I’m so into it. I probably was a dolphin in my last life. The dolphin project with Ric O’Barry is one of my favorite charities, if you can call it a charity. It's  trying to get the Japanese to stop killing our damn dolphins because they’re so intelligent. There’s so much intelligence there we should be utilizing it instead of killing them. So that’s one thing, for sure. I’m also a big fan of doing everything I can for the veterans, the guys who went to war for our country. I just did a show for them a few days ago. People need to remember that without them, we wouldn’t be living so well. And come see my show at a theater near you soon!