Sam Getz Interview: Breakout Band Welshly Arms Inspires Us All to Be "Legendary" 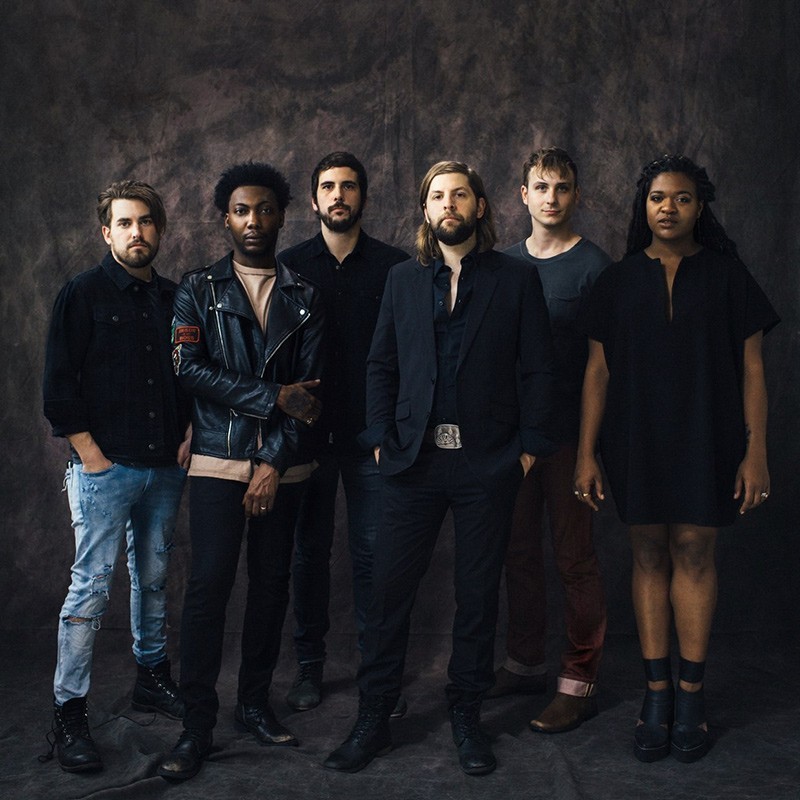 Sam Getz is the frontman (lead vocals and guitar) for the up-and-coming rock group Welshly Arms. The Cleveland, Ohio, band has been active since their debut in 2013 with the EP Welcome. The following year, they released a covers EP, and in 2015, an album called Welshly Arms came out on the indie label Position Music.

In August of 2017, the band released an EP entitled Legendary with the breakout single as the title track and songs “Who We Are,” “The Only,” and “Never Be the Same,” via Republic Records. To date, the song “Legendary” has surpassed 25 million streams on Spotify, and the video has accumulated over three million views on YouTube.

"I was actually a little surprised at first that “Legendary” was the song that really cut through for us. But I think it inspires people, and it’s also singable. It really feels amazing to be surrounded by people in the audience singing that chorus with us!"

Melissa Parker (Smashing Interviews Magazine): Sam, what is your musical history before Welshly Arms was formed?

Sam Getz: I grew up playing rock and roll on the drums and was exposed to lots of great music through my father. I got really into blues and started a blues band with him when I was 14 years old. My father and I would play all the blues clubs around Cleveland together and even opened for some of my heroes like Peter Green of Fleetwood Mac, Mick Taylor of the Rolling Stones and blues rock musician John Mayall. I started doing a little session work a couple of years later and then ended up touring as a guitar player for a couple of different singer-songwriters.

Melissa Parker (Smashing Interviews Magazine): When and how did Welshly Arms come about?

Sam Getz: A lot of us grew up together playing in different bands around town, but never all in the same project. I was coming off the road from a tour. Brett (Lindemann) had just moved back from college, Jimmy (Weaver) had just moved back from Seattle, and Mikey (Gould) had been gigging around town. I suggested we get everyone together for a barbecue and possibly play some music. That’s really where it all started. We loved making music just for the sake of making it. Soon after, we started tracking an EP.

Melissa Parker (Smashing Interviews Magazine): Where did the name of the band originate?

Sam Getz: The name Welshly Arms comes from an old 1990s Saturday Night Live sketch with Will Ferrell and Jimmy Fallon. Mikey and I used to sit around watching that show when we were teenagers, and we always used to quote that sketch. I think we originally had the name as a placeholder, but then we liked it so much, it just stuck.

Melissa Parker (Smashing Interviews Magazine): The band was first a quartet, so what’s the story behind Bri (Bryant) and Jon (Bryant) joining?

Sam Getz: When it came time to start playing live, we realized that we were missing something, and that’s when Jon and Bri came into the picture to help us really round out the sound.

Melissa Parker (Smashing Interviews Magazine): Tell me about the band members and what they bring to the table.

Sam Getz: Jimmy comes from a classical background and is not only our bass player, but he also engineers and mixes our records. Brett, on keys, comes from a long line of piano teachers and is quite a fine jazz and classical pianist. Mikey is on drums, and he and I have been good friends since high school when we started a band together. He turned me on to punk music, and I turned him on to classic rock, blues and soul stuff.

Sam Getz: Well, I actually started to write it in my shower. You never know where and when inspiration will strike (laughs). It’s about overcoming struggles and challenges to do something great, whatever that may be. It could be an athlete who has trained all of their life to win a championship. It could be a musician who has practiced for hours on end. The song is really for anybody who has something to prove and is up for the challenge.

Melissa Parker (Smashing Interviews Magazine): The line in the song, “Gonna teach ‘em all a lesson.” What is meant by that?

Sam Getz: It has a couple of meanings to me. One is that this world could be a much brighter and better place if we all followed our hearts a little more and wouldn’t just stop chasing what we want for ourselves because someone along the way discouraged us, or we hit a hurdle. The overall lesson is that everyone has something in them that could make them a standout or be a “legend.”

Sam Getz: I was actually a little surprised at first that “Legendary” was the song that really cut through for us. But I think it inspires people, and it’s also singable. It really feels amazing to be surrounded by people in the audience singing that chorus with us!

Melissa Parker (Smashing Interviews Magazine): Well, the song is really an earworm. There seems to be a thematic similarity in the songs on the Legendary EP, like they’re about triumphs after struggles. Did you have a theme in mind for the EP before writing the songs?

Sam Getz: We’ve already started tracking a lot of songs for our next LP, but these four seemed to fit together nicely to form the EP. There are a couple of things I can give credit to, though, for these songs having that type of theme. One is our love of Cleveland sports and the recent successes of the Cavaliers and Indians after a very long drought of championships in Cleveland.

The other is my desire for our country to come out of this dark political struggle we are in. I know that we will be better after these lessons we are learning, but it’s tough right now, hence the bridge of “Who We Are” – “We need some patience to ease our minds. These years of trouble will fade in time. We all need some luck just to get by to pull the curtain and see the light.”

Melissa Parker (Smashing Interviews Magazine): I love the bluesy sound in “Never Be the Same,” and I hear some White Stripes or ZZ Top. What’s the story behind the song?

Sam Getz: Thank you for the compliment of a ZZ Top and White Stripes comparison! “Never Be the Same” is an example of letting the music drive the songwriting. We knew how we wanted that song to feel before most of the lyrics were written. I think most guys can relate to being taken by surprise when you realize how much a relationship with a woman can change you … sometimes for the better. This is about one of the not so good times and the realization that you have to get out while you can.

Melissa Parker (Smashing Interviews Magazine): How would you describe the sound and the mission of Welshly Arms?

Sam Getz: This is always hard because I think music hits everyone differently, but to me, we play a sort of updated version of soul rock. Our mission is to do our part in keeping real music alive. Music with guitars, drums and real vocals. We want the music to be infectious and hope that anyone coming to one of our shows is ready to dance, sing, stomp and scream a little bit!

Melissa Parker (Smashing Interviews Magazine): You’ve talked about starting an early band with your father, but when was the first time you picked up that guitar and really thought about being a serious musician?

Sam Getz: I got a plastic guitar that I would carry around all the time when I was three and then got a real guitar at seven or eight years old. Music was all over our house. Both of my sisters played classical piano, my dad played drums and my mom would sing around the house all of the time, and she made up little songs about whatever was going on around the house. I think that’s actually when and where I first learned to write songs! (laughs)

Sam Getz: We are all big fans of blues and soul music! We are very inspired by Motown and Stax Records. I started playing guitar so that I could play the blues. The rock and roll stuff that I loved as a kid all had so much of a blues influence, so I dug into the early American blues stuff and was hooked. We all have some different influences, but I think we meet at soul music, which is why you will probably pick up on that.

Melissa Parker (Smashing Interviews Magazine): Your music has been used on the trailer for The Hateful Eight, on commercials, etc. How did that come about?

Sam Getz: We’ve been fortunate to work with an excellent publisher (Position Music) that has put our music in the hands and ears of the right people who found some really great ways to use our songs!

Melissa Parker (Smashing Interviews Magazine): What has been the most difficult challenge for the band to overcome since its inception in 2013?

Sam Getz: I would say the biggest challenge is balancing our road schedule with trying to do as much recording as we like to do to stay creative and fresh. We really started as a recording band and didn’t know that we would ever end up hitting the road as much as we have this year.

Melissa Parker (Smashing Interviews Magazine): Will you ever be interested in solo work?

Sam Getz: Every once in a while I end up with songs that don’t make sense for Welshly Arms to record. I haven’t really thought about it, but maybe down the road, if we ever slow down, it could be fun to cut some of those tunes.

Melissa Parker (Smashing Interviews Magazine): Who do you listen to?

Sam Getz: How much time do you have? (laughs) I gravitate toward classic blues, soul, Americana and rock and roll, but I never get tired of discovering new bands and artists! I was just enjoying the latest The War on Drugs album a minute ago.

Melissa Parker (Smashing Interviews Magazine): What’s next for the band?

Sam Getz: We are currently recording songs for an LP. We should have that out sometime in the first half of 2018 and are looking forward to more touring through the US and Europe, as well as hitting some festivals.

Melissa Parker (Smashing Interviews Magazine): Where does your drive to make music and perform come from?

Sam Getz: I absolutely love the writing and recording process and don’t think I’ll ever get tired of making new music with my best friends! I also don’t think I’d be happy if I didn’t get to perform those songs live and feel the audience reaction and improvise within the songs each night. Sharing the music is really the most rewarding thing about making music.

« Charlie Sykes Interview: "The Trumpish Right Is Dumb, Cruel and Dishonest"
Donny Osmond Interview: "Reinvention Is the Key to Longevity" »