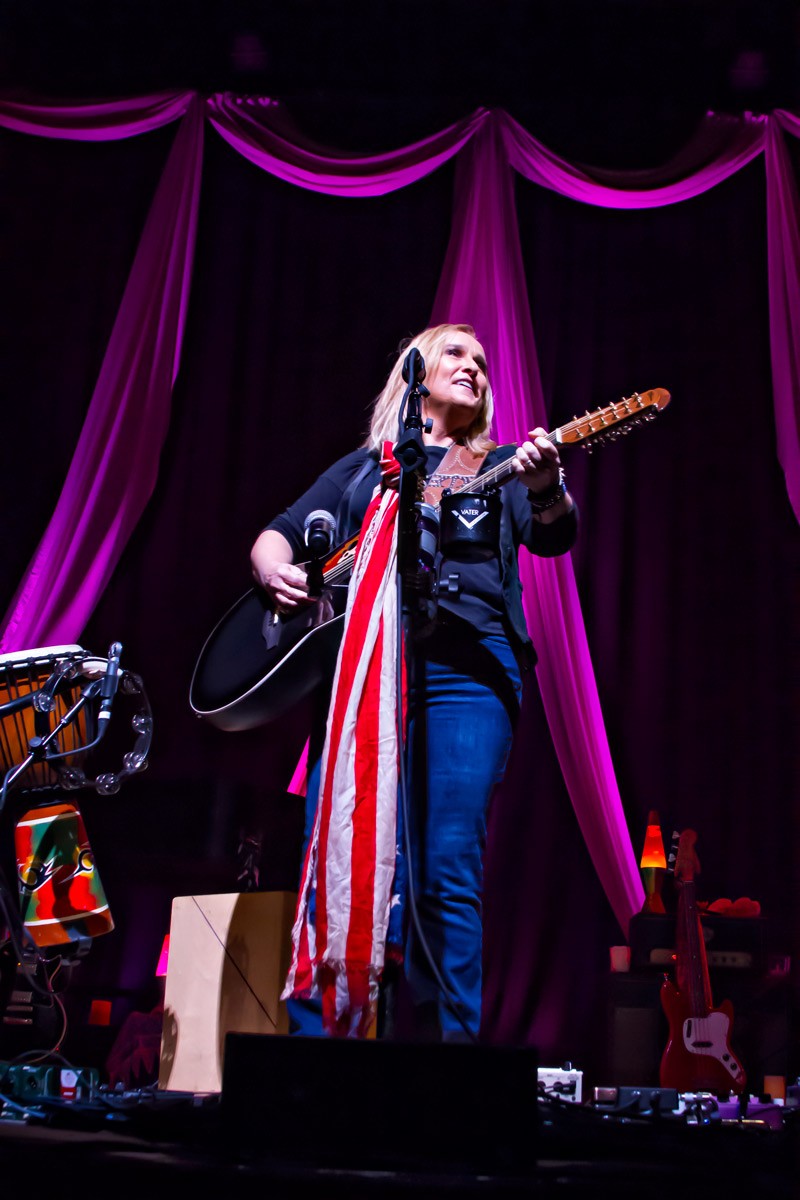 Melissa Etheridge has teamed up with PledgeMusic to release her new album, MEmphis Rock and Soul, on October 7, 2016, via Stax Records, a division of Concord Music Group. The album is a collection of deep covers associated with the original Stax label, including songs recorded by Otis Redding, Rufus Thomas, the Staple Singers, Sam & Dave and more. The album also features new, original verses written by Etheridge on two of the tracks.

Over the course of her 20+ year career, Etheridge has won an Oscar and multiple Grammy awards, survived breast cancer and has become a powerful voice for the LGBT community. She also penned the song “Pulse,” paying tribute to those lost in the June 12, 2016 Orlando shootings, and all proceeds for the song benefits Equality Florida.

"When I see a challenge like that, that excites me, and I really wanted to step up and do my best with it. So, with all the respect and all of what I have inside me, all the talent that’s inside me, I really stepped out and did this. I did it with the musicians down there in Memphis. I really just surrounded myself and embedded myself into Memphis to totally get the feel and the original inspiration of it all, so that I could just pay as much respect to it as I could."

Melissa Parker (Smashing Interviews Magazine): Melissa, we saw you in concert earlier in the year, and you were just amazing going back and forth playing all of those instruments!

Melissa Etheridge: (laughs) I like to challenge myself. I don’t want to get complacent in my work and just kind of do the same thing over and over. If I’m going to be out there, if this is the work I’m going to do every day, year after year, then I want to enjoy it, I want to get better at it, and I want to contribute. So, getting out there and just getting better and learning all the guitars and all the different things, that really excites me. I’ve just really been on that path and I’m lovin’ it.

Melissa Parker (Smashing Interviews Magazine): The last time we spoke, we talked about This is M.E., which was the first record on your label. So, why on this new album did you decide to team up with Concord?

Melissa Etheridge: I know. It’s kind of funny. I was like, “Okay. I’m all independent.” Then I was talking with my agent, and we realized there was this situation where we could do this Stax record, and we could do it on the Stax label and Concord. The thing is, being an independent artist, I can do that. It’s a one off sort of thing, and its actually kind of fun working with Concord. Its an amazing record label. They really take care of their artists. They’re in it for the music. So, it just all made sense. I went, “Well, why not?” I went there, and I’m doing that this year.

Melissa Etheridge: Yeah. It’s a really great way to reach and connect with fans. My fans love the background stuff, the behind-the-scenes stuff, the special things we can make available to them. Pledge is an incredible way of reaching the fans and getting that stuff to them and firing them up. I’m just thrilled to be working with both of these companies.

Melissa Parker (Smashing Interviews Magazine): Some critics are calling MEmphis Rock and Soul “gutsy.” Was there any apprehension on your part undertaking the music of such legendary soul artists?

Melissa Etheridge: Oh, my God, yeah! Sure. It’s like, “Wow!” If you’re going to try to sing Mavis Staples, Otis Redding and Sam & Dave, you better be on the best part of your game ever. I realized this and went in with just such respect for these artists, for their talent, for the deep soul music that they created and for how much they influenced all of rock and rock and so many other artists.

When I see a challenge like that, that excites me, and I really wanted to step up and do my best with it. So, with all the respect and all of what I have inside me, all the talent that’s inside me, I really stepped out and did this. I did it with the musicians down there in Memphis. I really just surrounded myself and embedded myself into Memphis to totally get the feel and the original inspiration of it all, so that I could just pay as much respect to it as I could.

Melissa Parker (Smashing Interviews Magazine): Stax Records definitely played a huge part in Civil Rights. Both the music and the business of Stax were created by an integrated team in the late 1950s, so blacks and whites were working together in the segregated city of Memphis. Did you talk to some of the musicians that were around during that time?

Melissa Etheridge: Absolutely! We would start every day, every session where I would sit down with Rev. Charles Hodges. He’s the organ player you hear on all the Al Green tunes. He played, and then there’s Michael Toles. He’s the wah-wah guitar riff you hear on “Shaft.” These are the guys that were there. They’d sit around and laugh and tell stories about how they’d be touring in Alabama. They’d get pulled over, and the policeman would drag them out to a farmhouse where a judge was, and they’d be looking around at the trees to see if there were any ropes. They were just laughing telling these stories, and I was horrified! Yet, this is what they had to go through. They’re on the other side of it now.

We’re still working for this equality, for this “fear of the other” to stop, especially with law enforcement and really having an understanding. So, going back and studying that time where Stax had such a huge influence on Civil Rights, you find that they were the only interracial record label around. Booker T. & the M.G.’s was two black guys and two white guys, and they were making the greatest music. Then, the assassination of Martin Luther King just tore them apart. It’s a beautiful, sad story, and yet, it’s so relevant of what we’re going through today.

Melissa Parker (Smashing Interviews Magazine): How did you even begin to choose the songs for the album?

Melissa Etheridge: (laughs) I started with about 200 songs. Last year, I just started listening to them. There were Stax songs that were more known, and there were some that had been covered and done two or three times. I didn’t want to do “Try a Little Tenderness” because it was overdone, you know? I wanted to tackle Sam & Dave’s “Hold On, I’m Comin’” because I just think it’s one of the most perfect rock and roll songs in the world. I wanted to do Otis Redding.

I found some that not many people have heard, even the Stax people. I found a Barbara Stephens song. It was her only song, and it’s called, “Wait a Minute.” Most people say they’ve never heard of that. Only one person, Deanie Parker, who knows the whole history of Stax said, “Oh, yeah. I remember her.” So, I narrowed the list from 200 to 100 to about 50 to down about 20. Then, when I got to the studio, I did about 17, then we narrowed it down to 12, so there you go.

Melissa Etheridge: Yes. You know, I have deep respect for the Staple Singers and Mavis. When I listened to “Respect Yourself,” I realized the message of it was so deep and relevant today that I wanted to modernize it a little bit. I called Priscilla Renea, an amazing black singer-songwriter, and I said, “Come in and help me modernize this and make the message as powerful today as it was back in 1971.”

Melissa Parker (Smashing Interviews Magazine): How much influence can artists have in a very historical and controversial political race?

Melissa Etheridge: I think we all have a chance to influence by just speaking our truth, by really saying what we feel. I don’t think anybody’s wondering who I’m supporting. But, I actually look at this, and I’m grateful. I’m grateful that finally in our digital age, our Internet, and the instant, instantaneous information that we get allows us to really see beyond the facades that used to be thrown up.

You used to be able to act a certain way, but you could feel and think another way, and nobody would really know it until it was too late. Now, that has totally changed. You get the information right away, and we’re able to really see what’s going on.

That is what makes us strong, and that is the beauty of it, that we can all be here and all believe in this democracy, in this equality. It’s amazing that the number one thing that’s out there in this election today is, are we going to be afraid of the other? Are we going to let our fear of the other or that somehow their being here takes something away from us? Or, are we going to stand up and say, “This has been what has always made America strong. Diversity is what makes us strong and is a beautiful way to go into this century.”

Melissa Parker (Smashing Interviews Magazine): A couple of years ago, you told me that you and your wife were writing a Broadway musical. Is that still a go?

Melissa Etheridge: (laughs) The thing is, I’ve got my career out here and I’m doing all these things. She’s got her television shows and things she’s writing for. On the two or three weeks a year when we’re not doing that, we actually work on the musical. So, it is still something that is maybe someday going to happen. I hope so. But, man, it’s hard to get the two of us on the same page together at the same time (laughs).

Melissa Parker (Smashing Interviews Magazine): How are the kids?

Melissa Etheridge: Oh, my God, the kids are great! They get older. I just had a two-week vacation with them, and man, I’m exhausted. I just did a lot of water slides, fishing and kayaking, and we just had a blast.

Melissa Etheridge: I’m doing a lot of shows with Pat Benatar this summer, and Joan Jett is doing my cruise with me this fall on October 31.

Melissa Parker (Smashing Interviews Magazine): What has been your greatest accomplishment in your career thus far, and have you ever thought of slowing down?

Melissa Etheridge: I think the accomplishment is that I’m still in it. I still get to perform, that the new music I put out is still relevant and waited for, and that I still get to do what I love. That’s success for me. That’s an accomplishment. And, why on earth would I want to slow down? I’m having way too much fun!