Melissa Etheridge Interview: "It Is an Absolute New Day," Rocker Declares with Her Latest, "This Is M.E." 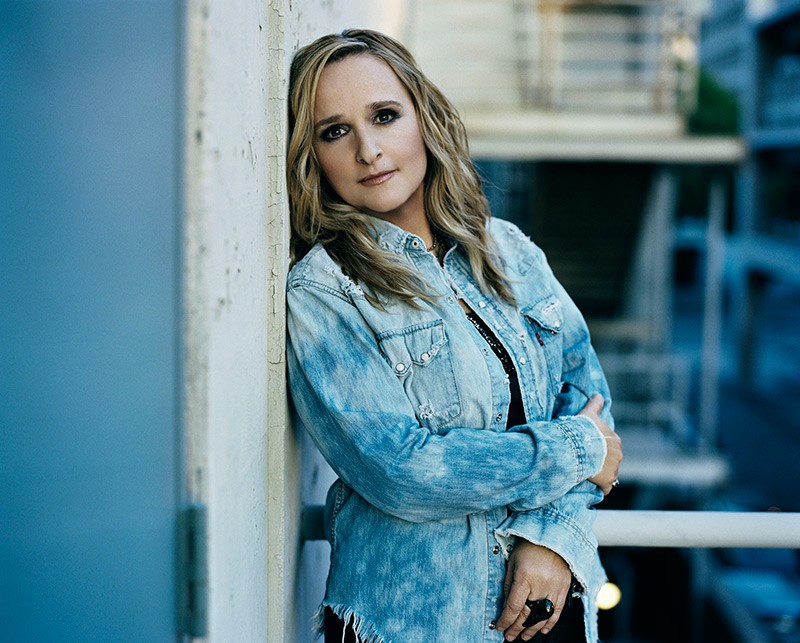 Rock singer, songwriter, guitarist and activist Melissa Etheridge has been in the music business over twenty-five years. She has received fifteen Grammy Award nominations, winning two and an Academy Award. Her breakthrough album, Yes I Am, released in 1993, peaked at #15 on the Billboard 200 and spent 138 weeks on the chart, earning a certification of 6x platinum, her largest to date.

Etheridge’s latest studio album and 12th collection of new material, This Is M.E., is set for release on September 30, 2014. Recorded in New York and Los Angeles, the record features eleven new songs all written or co-written by her along with writers such as Jon Levine (Andy Grammer), Jerrod Bettis (Birdy, Adele), Jerry Wonda and Roccstar and includes tracks produced by Levine, Bettis and Mark Batson (Grace Potter and The Nocturnals). This Is M.E. album cover features a mosaic of photos submitted by fans.

"If you want to use “Come to My Window,” the record company gets paid, not me, because of the master, but now with this album, I own it. Of course it’s much more responsibility on my part, and I have no one to blame but myself, yet with social media, it’s a new day. I can absolutely reach my fans and do all the work and reap much greater benefits."

Melissa Etheridge: That’s what I want to hear!

Melissa Parker (Smashing Interviews Magazine): Several articles on the Internet have the title as This Is ME rather than This Is M.E.

Melissa Parker (Smashing Interviews Magazine): (laughs) Very clever, and it’s the first record on your label. After being on Island Records for so long, why did you decide to change?

Melissa Etheridge: Well, it’s a new day. It is an absolute new day in the music business. We hear more and more that the record industry is just in a free fall. Every time I’d go back to my record label, there’d be less and less people there (laughs). It all conglomerates together, and it’s in a free fall decline. They were no longer able to guarantee me the kind of promotion that I needed and the kind of attention that I needed and the biggest factor is I can now own my record where they owed the masters before.

If you want to use “Come to My Window,” the record company gets paid, not me, because of the master, but now with this album, I own it. Of course it’s much more responsibility on my part, and I have no one to blame but myself, yet with social media, it’s a new day. I can absolutely reach my fans and do all the work and reap much greater benefits.

Melissa Parker (Smashing Interviews Magazine): That’s an interesting idea about the fan photos covering the album cover. Do you know how many you have?

Melissa Etheridge: Oh, you know what? I should find out exactly how many we ended up with. We got over 2,000 entries. It would only take so many, but it was just really amazing and lots of fun.

Melissa Parker (Smashing Interviews Magazine): How did This Is M.E. come about?

Melissa Etheridge: Last year when I went through this big change, I got new management, new lawyers, new everything, the whole setup. Then leaving my record label, I thought, “Okay. What do I need to kick start my career to just really come out of the box? I need a new album.” I had such a freedom writing new music, writing the songs. I had such a freedom making any type of new music I wanted, and that’s why you get this rich sort of … you know it’s me, yet there are many different styles on the album. I just had a blast doing it.

Melissa Etheridge: Yeah. 4th Street Feeling was more introspective. It was more like, “Okay. I’m going in with my band, and we’re just going to make the music that’s there, and these are the songs, and they’re about the past.” That’s what that was all about. This album is much more “outroverted.” It’s like, “Yeah! Let me work with the hip-hop producer. What does that sound like? Let’s just make it richer! Turn it up!”

Melissa Parker (Smashing Interviews Magazine): My favorite is “A Little Bit of Me.” You said that your daughter turned you on to the Lumineers?

Melissa Etheridge: Yeah, a few years ago. My daughter … both of my kids are great at bringing the new music to me. She’s seventeen now and such a music lover. She went to Lollapalooza and Outside Lands. She just loves that sort of community feel that music has nowadays.

They love to sing along. They love to clap their hands and say, “Hey, ho,” and do that sort of thing (laughs). You can see a little bit of that in “A Little Bit of Me.” Everybody can sing along. That’s where that comes from. Everyone likes to participate and playing live is my favorite thing to do, so having people sing and clap along is awesome.

Melissa Parker (Smashing Interviews Magazine): I understand that “Who Are You Waiting For” was your wedding song?

Melissa Etheridge: Yes. I am so corny.

Melissa Parker (Smashing Interviews Magazine): I thought it was very sweet (laughs). Congratulations on the marriage!

Melissa Etheridge: Thank you so much. It was really lovely and an amazing experience. I’m so grateful I was able to get married and have my state recognize it and really go through all of the … to have a real honest to goodness marriage license, a marriage that’s sanctioned by my state and federal government.

Melissa Parker (Smashing Interviews Magazine): Do you think in the next twenty years same sex marriage will be legal in all fifty states?

Melissa Etheridge: Oh yeah. I definitely think in the next twenty years, we’ll be there.

Melissa Parker (Smashing Interviews Magazine): Was it a surprise to fall in love again?

Melissa Etheridge: (laughs) I was like, “I’m done. That’s it. It’s over. I don’t ever need to ever go through anything like that again. I’m obviously not very good at this and really think I’m just going to take care of my needs as they come along, but no relationships.” The only reason that I did fall in love was that Linda was my best friend, and I was seeing her every day. She was helping me out, and then I fell in love and went, “Oh, that was not what I was planning!” But I was waiting for her. It was perfect.

It was the opposite way of what I had before. You meet someone you think is attractive, you are sexually attracted, you have sex. That all works out, and you try to be friends with them. Sometimes that doesn’t work out (laughs). This was done completely the opposite. I was friends with her. My children knew and loved her. All of that worked out, and then I was also attracted to her. That was perfect.

Melissa Parker (Smashing Interviews Magazine): You recently performed with the San Francisco Symphony. Is this the beginning of performing with symphonies around the country?

Melissa Etheridge: I hope so. This summer I did Boston, Chicago and San Francisco, and it was one of just my all time favorite things that I’ve done. It’s really exciting, very musical. There’s just nothing like hearing all the parts. I loved it, and the audience seemed to love it too, so I do hope in the next few years that I put together a whole symphony tour.

Melissa Parker (Smashing Interviews Magazine): Is the preparation for performing with a symphony different than singing solo with your band?

Melissa Etheridge: The biggest difference is that it is set music. With my band there’s a lot of open-endedness in the songs. My band knows they’ve got to be on their toes and watch whatever I do because I can go anywhere. If the crowd’s right, if something feels right, I’ll go over here, and it will be eight bars instead of four, so it’s very improvisational in nature. Well, with an orchestra, you can’t do that (laughs). If you make a mistake, if you miss a measure or two, all seventy-five of you are going down (laughs). You have to study the arrangement and exactly what the form is and stick to it. It’s very disciplining for me.

Melissa Parker (Smashing Interviews Magazine): When we last spoke, you said that you’d love to do a musical on Broadway. Are there plans for that?

Melissa Etheridge: There are still plans. My wife and I are writing it, and she’s only got three television shows she’s working on now. It’s this constant “it’s there in the wings.” We’ll go on vacation, and say, “Yeah. Okay,” and we do a little work on it. It’s going to come up in the Rolodex soon. I would give it another couple or three years though, and when it does, its just going to be perfect.

Melissa Parker (Smashing Interviews Magazine): You are celebrating ten years cancer free! That is so great. What words describe that journey?

Melissa Etheridge: Triumphant, thriving. I’ve gone from surviving to thriving that knowing beyond any doubt that my health is everything. If I don’t have my health, I don’t have anything. The way to take care of myself is to take care of me, to watch my stress levels, to understand that every food that goes into my body effects my body and to know what I’m putting in my body, keeping myself physically fit and yoga. Nothing crazy, just a dedication every day to make sure.

Melissa Etheridge: Yes I am. Ten years ago when I went through chemotherapy and used it, I thought, “I don’t know why anyone should have to go through chemo and not use this as an option.” Sticking with it and having cannabis a part of my life, I realized this is so good on so many different levels.

I think definitely in the near future, the legalization of cannabis is going to be just on the forefront because it’s an alternative medicine, plant medicine. Just seeing where the pharmaceutical thing has led us is just … I don’t think there’s a lot of future in that. I think plant medicines are where we’re going.

Melissa Parker (Smashing Interviews Magazine): What’s next for you, Melissa?

Melissa Etheridge: I’m doing this solo tour, and the new album comes out September 30. I’ll do promotion for that in September and October, and then come November, you’ll see me back on tour with a full band and just loving that. I’m just loving being in the moment and the process and doing what I love to do.