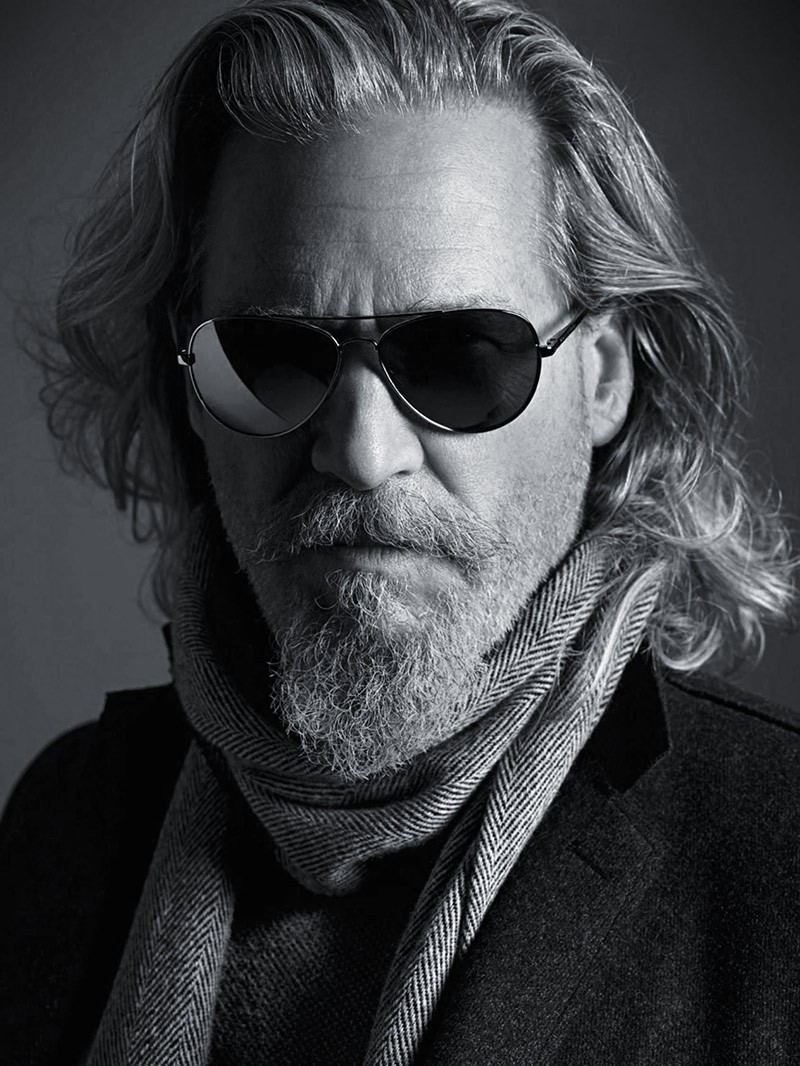 Jeff Bridges is the son of showbiz parents, Lloyd and Dorothy Bridges, and he made his screen bow as a petulant infant in the arms of his real-life mother in the 1950 melodrama The Company She Keeps that also featured his older brother Beau. The younger Bridges made a more formal debut at age eight in an episode of his dad’s television series Sea Hunt.

"My music has just been kept alive all these years, and every once in a while, it bubbles up, like meeting Michael McDonald and getting into cahoots with him and forming a record label (Ramp Records) with him and Chris Pelonis or doing Crazy Heart. Crazy Heart threw a lot of gasoline on my musical fire. I met my old friend T-Bone Burnett over thirty years ago on Heaven’s Gate, and that was a musical experience. I guess you’d just say that music bubbles up or something throughout my life. It has kept going, and I’m thankful for it."

In addition to his acting achievements, Bridges released his latest album on September 30, 2014, with his band The Abiders, entitled Live which includes fourteen tracks of live recordings from his debut album Be Here Soon and self-titled follow-up record, as well as original music from the critically acclaimed Crazy Heart and some of his favorite chosen covers of The Byrds, Tom Waits and Creedence Clearwater Revival. Bridges and The Abiders are performing in select cities throughout the month of November.

Melissa Parker (Smashing Interviews Magazine): Jeff, are you having a good time on tour?

Jeff Bridges: Yes, I'm having a lot of fun playing with all my dear friends from my hometown. They’re such wonderful musicians, and it’s great spending time with them.

Jeff Bridges: Yeah. I like all kinds of music, and this album kind of reflects that. There’s some rootsy Americana type stuff on there, country, rock, maybe a touch of jazz thrown in somewhere in there. I’ve got pretty eclectic tastes.

Melissa Parker (Smashing Interviews Magazine): Why did you decide to devote more time to your music career now?

Jeff Bridges: It was just sort of a natural progression. I’m so happy that my music, which started back when I was a teenager, didn’t atrophy when my movie career took off. I think my love of music kept it alive. I always have a guitar nearby and a group of friends that I play with. Whenever I’m making movies, there’s always a batch of guys that play music. My daughter, Jessie, who is opening for us in several shows, is a wonderful musician and songwriter. She has been my assistant on about three movies I’ve done recently, so we play a lot of music in between setups.

My music has just been kept alive all these years, and every once in a while, it bubbles up, like meeting Michael McDonald and getting into cahoots with him and forming a record label (Ramp Records) with him and Chris Pelonis or doing Crazy Heart. Crazy Heart threw a lot of gasoline on my musical fire. I met my old friend T-Bone Burnett over thirty years ago on Heaven’s Gate, and that was a musical experience. I guess you’d just say that music bubbles up or something throughout my life. It has kept going, and I’m thankful for it.

Melissa Parker (Smashing Interviews Magazine): What was your musical background growing up in the family home?

Jeff Bridges: I can remember one of my first musical memories was when I was a little kid about eight years old, and Meredith Wilson (who wrote The Music Man) was over at our house with his wife, Rini Wilson, and they were playing the whole score to The Music Man. It hadn’t come out yet, and Meredith wanted my father to play the Robert Preston part.

My father did Guys and Dolls on the road, and he replaced Richard Kiley in Man of La Mancha on Broadway. Then I remember the sounds coming out of my older brother’s room, Beau’s room, and it was Buddy Holley, the Everly Brothers, Little Richard, Chuck Berry and those guys, so I had a mixture of music to listen to growing up.

Melissa Parker (Smashing Interviews Magazine): Barbara Streisand recently tweeted, “Jeff brings the same honesty to his music that informs all his roles as an actor.”

Jeff Bridges: Oh, that was nice of her.

Melissa Parker (Smashing Interviews Magazine): Immediately I thought of The Mirror Has Two Faces. How would you describe Barbra?

Jeff Bridges: Oh gosh. Barbra is a wonderful artist. A lot of people get on her about her diva, her detailed “everything’s got to be perfect” thing. I suppose she does have that aspect, but it’s wonderful to have that perfection focused on you when she’s directing you because she was just as caring about how I looked and how I was feeling and what my character would be doing as she was about her own. And I was always surprised at how softly she sings.

Melissa Parker (Smashing Interviews Magazine): Do you receive the same kind of satisfaction from singing as you do from acting?

Jeff Bridges: There are a lot of similarities. In making movies, you study your lines and figure out your character, and then in music you’re practicing or writing your songs. That’s a solo thing, but then you’ve got the collaborative aspects to both of those whether it’s playing in a band or being with the actors, directors and crew. I look at it as pretty much the same thing. Even performing in front of an audience, I look at it as doing a scene, an improvisational scene on stage. You’re all in it together. It’s a good feeling.

Melissa Parker (Smashing Interviews Magazine): You made The Last Picture Show in 1971, so how does a young, basically inexperienced actor handle an Oscar nomination at such an early time in his career?

Jeff Bridges: Oh man. Where are you from? I hear kind of a Texas accent. Are you from Texas?

Jeff Bridges: Birmingham, Alabama! I made a movie there, too. I made a movie about the NASCAR driver Junior Johnson called The Last American Hero there in Alabama. Doing The Last Picture Show and getting that nomination was just phenomenal. It was such a surprise. I remember the phone ringing at about five o’clock in the morning, and someone saying, “You’ve been nominated!” I couldn’t believe it.

Melissa Parker (Smashing Interviews Magazine): Will there be another sequel to The Last Picture Show?

Jeff Bridges: I sure hope so. Larry McMurtry is such a wonderful writer. He’s got three more books in that series. I know Peter Bogdanovich and I always talk about it.

Melissa Parker (Smashing Interviews Magazine): What did you learn from your dad about acting?

Jeff Bridges: My dad taught me all the basics about acting. I can remember him sitting me on his bed when I was doing a part in that TV show he had in the 60s called Sea Hunt. He would say, “Don’t just say your lines. You need to hear how you say it.” He taught me how to form the lines when you’re speaking and how to keep it fresh a bunch of different ways. I think the primary thing was he didn’t really say this in talking to me, but it was more of just observing him in how much joy he brought to his work and how contagious that joy was.

Whenever he would come on the set, dad enjoyed what he was doing so much, that happiness was contagious, and it would spread throughout the cast and crew, and everybody, all of a sudden, would get loose and happy. When you’re relaxed like that, all the good stuff is allowed to come out in a much easier way. I try to approach, not only my work, but my life and being alive that way because I’ve been very fortunate. It has been a real gift.

Melissa Parker (Smashing Interviews Magazine): Have you and Beau ever been competitive with each other in the acting world?

Jeff Bridges: No. Beau is eight years older than I am, and he has always been my champion. I think we consider ourselves on the same team. He has gotten some big success like he’s on these two TV shows now, The Millers and the … what is it called?

Jeff Bridges: Yeah. Masters of Sex. So he has two roles, and I applaud him for that. I told you that dad was my acting teacher, but Beau was also my acting teacher. I consider my brother my mentor as well. He was really responsible for getting me an agent and working on scenes with me and that kind of thing. We just celebrated with Michelle Pfeiffer the 25th anniversary of The Fabulous Baker Boys, and it was great getting together and reminiscing.

Jeff Bridges: Oh, I had a very hard time getting married. We’d been living together for about three years, and I, oh man … I didn’t want to pull the trigger on that marriage thing. I just resisted it, and finally I thought that she was going to take off. I could not let this girl that I was so in love with slip through my fingers, so I got down on my knees and proposed. She asked, “When are we going to do it?” I said, “How about Thursday?” (laughs) I didn’t know how long I was going to be able to hold that position (laughs).

I’m so glad that she put up literally with the years of pouting. For the first couple of years, I really had a tough time getting with the program. It took me quite a few years to realize that this was something I really loved. Talk about gifts, man, that’s my pride gift … my marriage.

Jeff Bridges: I’ve got Seventh Son and The Little Prince coming out. One of the things I’m really pleased about is touring around the country meeting with governors and talking about childhood hunger, trying to end childhood hunger here in America. That’s something that has been very gratifying, and we’re really making a difference I think. We’re concentrating on “Breakfast After the Bell,” so we make sure kids who are in need are getting the proper nutrition to start their school day.

I was just at a film festival, as a matter of fact, for a film I made with T-Bone Burnett called A Place at the Table all about hunger in America. That’s something else I’m working on. I’ve been the national spokesperson for Share Our Strength-No Kid Hungry campaign for about four years, so that’s an ongoing project of mine.

Melissa Parker (Smashing Interviews Magazine): Is there a secret to aging “dudefully”?

Jeff Bridges: (laughs) Man, I think that “follow your bliss” thing comes to mind, you know. I think "The Dude" would say “yea” to that.

« Anne Rice Interview: "Prince Lestat" Marks Renowned Author's Return to "The Vampire Chronicles"
Joe Perry Interview: Iconic Guitarist on His Relationship with Steven Tyler and His Memoir, "Rocks: My Life in and out of Aerosmith" »