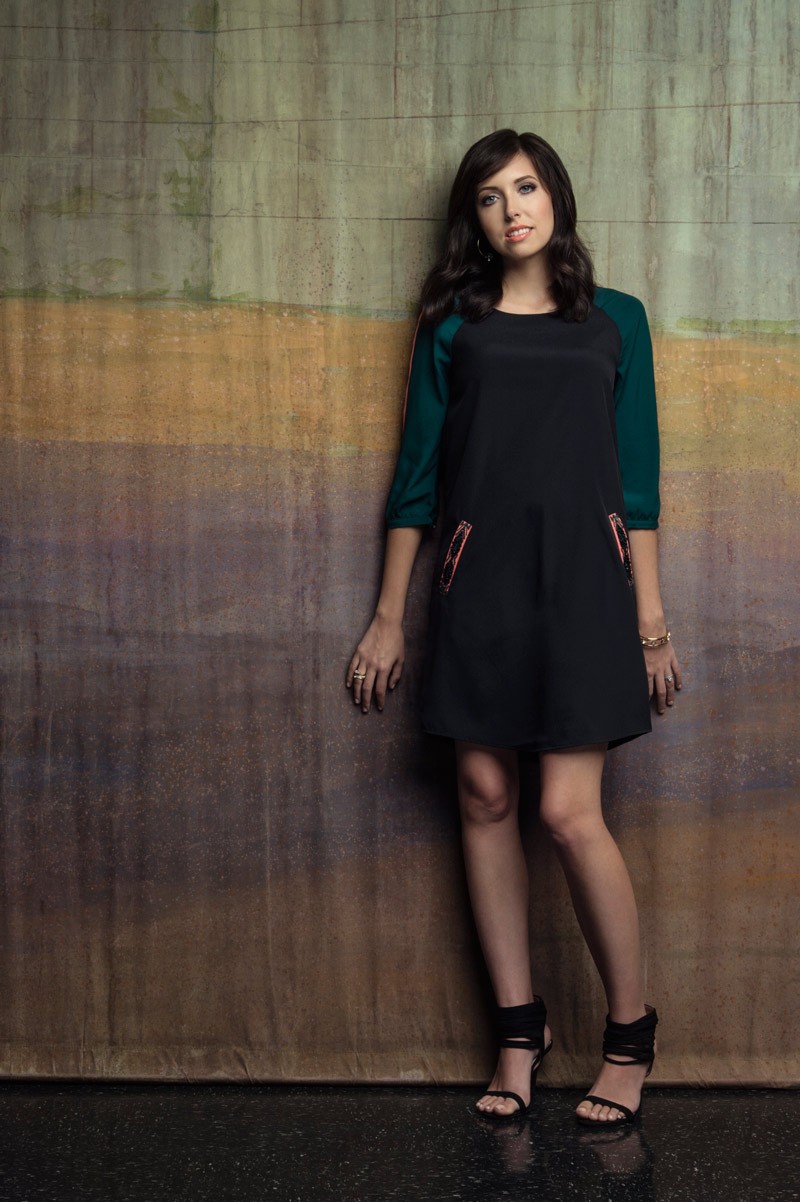 Since her debut in 2008, Francesca Battistelli has earned a Grammy nomination (Best Gospel Performance), six Dove Awards including 2011 Artist of the Year and twenty-two Dove Award nominations. Both her debut album, My Paper Heart (certified gold in 2012) and her 2011 sophomore release, Hundred More Years, took the No. 1 spot on Billboard’s Christian Album chart.

With nearly 1 million album sales to date and over 1.8 million single downloads, Battistelli is the bestselling new artist in the genre in the past decade. Her music has been featured on several television and film outlets. Battistelli performed her new single, “Write Your Story,” on ABC’s Good Morning America on February 13, 2014, to mark her national morning TV debut, and her third studio album called If We’re Honest is due out April 22, 2014.

"There’s a song on the record called 'If We’re Honest,' so that’s where the title came from. The song is really about just being honest and transparent in life and not putting up those walls or facades with people. It’s a really personal song and one of my favorites on the record, so we thought it would make a good title for the album as well."

Francesca Battistelli: It was great! It was really fun, a great experience. We had a good time.

Melissa Parker (Smashing Interviews Magazine): If We’re Honest is a very interesting title for an album.

Francesca Battistelli: There’s a song on the record called “If We’re Honest,” so that’s where the title came from. The song is really about just being honest and transparent in life and not putting up those walls or facades with people. It’s a really personal song and one of my favorites on the record, so we thought it would make a good title for the album as well.

Melissa Parker (Smashing Interviews Magazine): What are the differences between this album and your previous records?

Francesca Battistelli: I think phonetically it’s a little more current, and there’s a lot of energy on this record especially compared to the last one, but lyrically, it’s just deeper spiritually. We’re exploring some new themes on this record. It’s my favorite one yet, so I’m excited to get it out there.

Melissa Parker (Smashing Interviews Magazine): Did you write all of the songs?

Francesca Battistelli: I did. I co-wrote them all.

Francesca Battistelli: It’s sort of different every time. I think that every so often I’ll get a song that just comes to me all at once. The lyrics and melody come all at once, and then other times, I’ll have a musical idea. But that’s what I love about collaborating with other writers because they just have so much to bring to the table. I might have just a musical idea, and they will say, “Well, that pairs with this lyric I had.” Everyone I write with is a little bit different, but it’s my favorite part of the process. I love it.

Melissa Parker (Smashing Interviews Magazine): What was the inspiration for the single “Write Your Story”?

Francesca Battistelli: I’ve always loved the Bible verse, Jeremiah 29:11, “For I know the plans I have for you, plans to prosper you and not to harm you, plans to give you hope and a future.” That’s the inspiration for the song, saying, “God, I know your plans for me are good and therefore, I just want you to be the one to write the story of my life. It’s not about me. It’s about you.” It’s a really fun song, but it’s definitely derived from that. I’m so glad that people are responding so well to it.

Melissa Parker (Smashing Interviews Magazine): How did you become involved with the Son of God film and the tour?

Francesca Battistelli: My record label has a great relationship with Mark (Burnett) and Roma (Downey), who are the creators of all that. When they were trying to put the soundtrack together for the mini series last year, they really wanted a version of “In Your Eyes,” that old Peter Gabriel song. They heard my voice and said that they’d love for me to do a version of that song, so we recorded it, and that was our first experience with them.

When the show came out, they said, “Hey, we’d really love to do a tour and want you to be a part of it.” I loved the idea. A couple of friends of mine actually wrote a song called “Oh, Son of God” for the film and asked me to sing it. It has just been really cool to be a part of something that’s reaching so many people who maybe wouldn’t listen to my music or buy a Christian album, but they would go see this film or see the mini series. It was just exciting to be a part of that, a really unique experience, sharing God’s visual element of such an incredible film.

Melissa Parker (Smashing Interviews Magazine): Your parents were involved in musical theatre, so I assume that’s where your early interest in music began. Was it Christian music you were interested in from the very beginning?

Francesca Battistelli: Yeah. I’ve always been interested in Christian music and always loved it. But my parents did expose me to all sorts of music and art from a very young age, so I grew up listening to Stevie Wonder and Natalie Cole right alongside Steven Curtis Chapman and Nicole C. Mullen. I’ve loved all sorts of music from the time I can remember.

Definitely musical theatre is a big part of my roots and something I still love and would love to do more of in the future. But for most of my life, I wanted to do something with music and the arts, and it sort of evolved over time. By the time I really started writing music, it wasn’t long after that I knew I wanted to write Christian music.

Melissa Parker (Smashing Interviews Magazine): Do you have any brothers or sisters?

Francesca Battistelli: I don’t, no. Only child (laughs).

Melissa Parker (Smashing Interviews Magazine): What types of comments do you receive from fans who are not Christians?

Francesca Battistelli: I’ve heard some really cool stories of people who maybe weren’t believers, but they heard my songs in different places like a girl who heard a song on Jon & Kate Plus 8. She liked it, but didn’t know who sang the song until she looked it up. Then she bought my record and told me at a concert a year later that the song helped her to come to know the Lord and have a relationship with God. To me, that’s what it’s all about. I think anyone who listens to the songs, whether they’re a believer or not, are maybe listening to it because they like the song, and who knows what God can do through that.

Melissa Parker (Smashing Interviews Magazine): Francesca, what do you think about the “escapades” of Justin Bieber and Miley Cyrus?

Francesca Battistelli: It’s so hard because none of us really know what it’s like to be thrust into that spotlight so early in life. I can only imagine what pressure they’re under. But it is sad just to see these young artists sort of imploding a little bit. We were in Omaha recently playing a concert at a church, and Miley Cyrus was actually at the arena twenty minutes away. There was a news crew standing outside before my concert, and they started asking the fans why they were there instead of at Miley’s concert.

I think it gives a really interesting perspective just to hear, especially the moms of the young girls saying, “We want someone we can look up to.” To think, Miley used to be that. But she’s walking through whatever she’s walking through right now. My heart really breaks for her especially, and I hope she can get her life back to normal.

Melissa Parker (Smashing Interviews Magazine): Would you share your faith with Justin and Miley if given the chance?

Francesca Battistelli: Absolutely! If I had a chance to be in a room with either of them, I would try to share Jesus and let them know they’re loved and that it doesn’t matter what they’ve been, what they’ve done or where they’ve come from, God loves them and has a plan for their lives.

Melissa Parker (Smashing Interviews Magazine): I saw on your Facebook page where you were talking about being on the road and the little things that make you happy – good coffee, wifi, a warm dressing room. What makes you happy in everyday life?

Francesca Battistelli: My kids and my husband. When we’re home, it’s all about relishing that time because during touring season, those days are few and far between. I appreciate getting to cook and do laundry, just all the things that most people don’t love because they’re not “every day” things for us (laughs). It’s the little things even when we’re home, for sure.

Francesca Battistelli: No. He plays drums for me and is also managing me. His dad is one of the founders of NewSong, so they’re still very much a part of our lives. I stole him not too long after we got married (laughs). I stole him away.

Francesca Battistelli: They’re pretty shared. He’s awesome and has always been right in there with diapers and not afraid of it (laughs). I’m blessed.

Melissa Parker (Smashing Interviews Magazine): What’s next for you?

« Gordon Lightfoot Interview: From Elvis to Dylan: An Intimate Portrait of a Legendary Singer/Songwriter
Mel B Interview: "I Think All Five of Us Are Interested in a Spice Girls Reunion" »