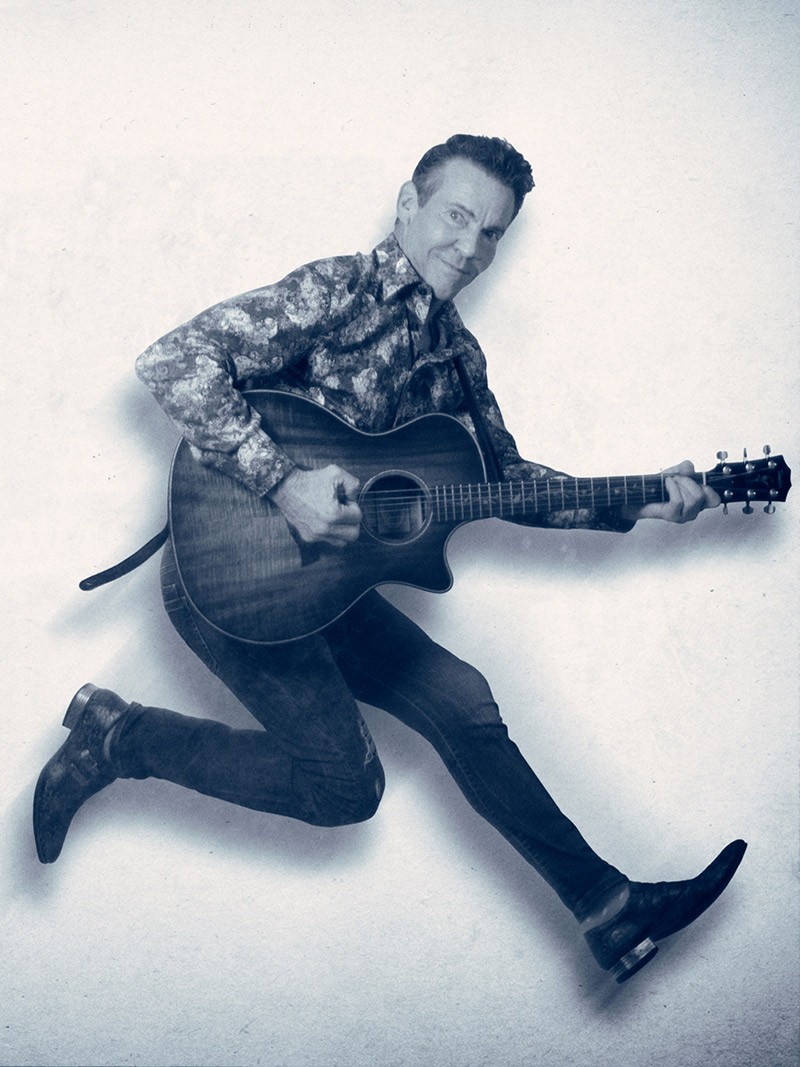 Dennis Quaid is known for a wide variety of dramatic and comedic roles. Notable film credits include Breaking Away, The Right Stuff, The Big Easy, Innerspace, Wyatt Earp, The Parent Trap, Any Given Sunday, Traffic, The Rookie, Footloose, Far from Heaven, Yours, Mine and Ours, A Dog’s Purpose and I Can Only Imagine.

In addition to acting, Quaid is a musician with his band the Sharks. The group released its debut album, Out of the Box, on November 30, 2018. In addition to Quaid, who is the lead singer and rhythm guitarist, other members are Jamie James (guitar), Tom Slick (bass), Ken Strange (keyboards) and Tom Walsh (drums). In 2018, the actor-singer became the spokesperson for Esurance, a wholly owned subsidiary of Allstate, in television ads. He is the younger brother of actor Randy Quaid.

"I played golf with T Bone Burnett about six months ago. I had never done a real record. I recorded shows sometimes that we’d been in and recorded some music but not in a real way, just had some CDs to sell at shows. I wanted to do a real record. T Bone was a great help."

Dennis Quaid: Yeah. It was a lot of fun. I was there with Jamey Johnson. He’s a great guy. I’m in Austin today for my mom’s 92ndbirthday!

Melissa Parker (Smashing Interviews Magazine): Oh, that is wonderful! Give her my best wishes. You and the Sharks recently released a debut album, but you’ve been playing together for 18 years?

Melissa Parker (Smashing Interviews Magazine): Of course. Harry Dean Stanton was a singer and became an iconic character actor. He passed away in 2017.

Dennis Quaid: I’d been friends with Harry since 1975. I went over to the club where his band was playing in LA. His band was basically the Sharks minus the drummer. Jamie (James), the guitar player, and I played together onstage, and I decided to get back and do it again. I had a band in the 1980s called the Eclectics, which was basically Bonnie Raitt’s band. Anyway, Jamie and I started playing the bars around LA there in Hollywood and started doing road trips. We’ve just had a couple of hiatuses during these 18 years.

I played golf with T Bone Burnett about six months ago. I had never done a real record. I recorded shows sometimes that we’d been in and recorded some music but not in a real way, just had some CDs to sell at shows. I wanted to do a real record. T Bone was a great help. He set us up at the Village recording studio in the big room there and let us use his engineer Mike Piersante who is really a co-producer on the record. Over a period of about six months, we had 25 tracks, put them all together, and out came Out of the Box (laughs).

Melissa Parker (Smashing Interviews Magazine): Some of the original songs were written over the years?

Dennis Quaid: We wanted our first record to reflect our show that we’ve been doing for so long, and the covers are music that we grew up loving, certainly Van Morrison’s “Gloria,” The Doors’ “L.A. Woman” and “Riders on the Storm” and Carl Perkins’ “Slow Down.” But we have a vinyl coming out which is, I think, going to be all originals except for “Slow Down.” That’s coming out in April.

Melissa Parker (Smashing Interviews Magazine): Was it your musical family that inspired you?

Dennis Quaid: I guess so. My dad played piano. His Elvis was Bing Crosby (laughs). He kind of had a voice like Dean Martin a bit. My third cousin was Gene Autry, so I grew up hearing about him a lot. Certainly “Rudolph the Red-Nosed Reindeer” was played in our house (laughs). I grew up in Houston, and the first person I really remember hearing was Hank Williams, and of course, Elvis. Then for me, when the Beatles came along, they just changed everything.

Dennis Quaid: Yeah. No kidding. I’m 64, so we were right there in front of the television, weren’t we? (laughs).

Melissa Parker (Smashing Interviews Magazine): We certainly were (laughs). Growing up in Houston, you had that interest in music but decided to turn to acting?

Dennis Quaid: Our dad was a frustrated actor, and he took us to movies and told us to “watch this,” “watch that.” My brother got into it in high school in drama and then in college. Then of course, I was kind of following in his footsteps. But you know, drama always included music as well. There was a teacher at the University of Houston. His name was Cecil Pickett, and he was a really great acting teacher. My brother, myself and Trey Wilson, an actor who was in Raising Arizona and just a bunch of actors came out of Mr. Pickett’s class. In the first week there of college, he was teaching acting as a craft, and I thought, “Wow! This is something I could actually do.”

Coinciding with that, you remember coffee houses back in those days? I went and auditioned in a coffee house right about the same time. The lady told me that what I had was good enough for living rooms, but she wasn’t going to hire me. So I went out to my car and said, “Well, I guess it’s acting.” (laughs) I got into acting and started in these movies and did The Night the Lights Went Out in Georgia with Kristy McNichol, and I wrote a couple of songs that are in the film. I wrote a song for The Big Easy. There were three or four films like that. I did a movie with Ringo Starr, which was really a big thing for me musically because it really gave me a lot of confidence. We would just play all the time. We spent 15 hours a day together down there in Mexico. It was one of the big moments of my life as an actor but really more as a musician to work with him.

Melissa Parker (Smashing Interviews Magazine): Were your parents supportive of both you and Randy entering show business?

Dennis Quaid: My dad said, “Just make sure you make a living at it.” My mom has always been my rock and still is. She was supportive of anything we did and very encouraging at the same time.

Melissa Parker (Smashing Interviews Magazine): Was acting a struggle for you in the beginning?

Dennis Quaid: Well, the thing you’ve got to do with acting is learn how to be rejected, so you won’t keep coming back to the same girl (laughs). What about now? You want to go out now? (laughs). But, yeah, it was a little tough at first. I sent my picture out to all the agents and got turned down. I sent pictures to casting directors. Just to learn how to do interviews was hard. But one of the casting directors called an agent that had already turned me down. I got an agent that way and got a job.

Melissa Parker (Smashing Interviews Magazine): Do you have that role you regret turning down?

Dennis Quaid: There’s a hundred of them not really worth talking about (laughs). I turned down Big. I turned down a couple of things, but at the same time I did other movies instead. So I have no complaints.

Melissa Parker (Smashing Interviews Magazine): You have played Bill Clinton, George W. Bush, and now you have the starring role as Ronald Reagan in a biopic.

Dennis Quaid: I kind of played George Bush. It wasn’t described as George Bush. But, yes, I guess Reagan would be my third president. When you get to be my age, they start offering you presidents (laughs). But Ronald Reagan should be a really challenging role. I’m looking forward to it.

Melissa Parker (Smashing Interviews Magazine): So you haven’t begun work on the film?

Dennis Quaid: No. We still don’t have a start date on it. I think the earliest time we could start shooting would be sometime in the fall.

Melissa Parker (Smashing Interviews Magazine): You’ve got The Intruder coming up. Is this the first time for you as a really scary guy weirdly attached to a house? (laughs)

Dennis Quaid: (laughs) Yeah. I love my real estate, I guess. That was a really fun thing to do. It’s really fun to be the bad guy. He’s sort of The Parent Trap guy gone weird a little bit (laughs).

Melissa Parker (Smashing Interviews Magazine): Then there is A Dog’s Journey coming out in May. Is it difficult to work with animals?

Dennis Quaid: Well, a lot easier than some actors I know. That’s for sure. But I’ve always been a dog person. So communication with dogs has never been a problem for me. I just love the story so much. I just had to do that.

Melissa Parker (Smashing Interviews Magazine): You know that I will have to mention the Esurance commercials (laughs).

Dennis Quaid: Yes. Highly likeable (laughs). I really love doing those. It’s self-effacing. I guess that’s part of the actor’s personality. You know, we’re all self-involved, right? (laughs) It’s kind of fun to do a riff on that.

Melissa Parker (Smashing Interviews Magazine): Did you offer any advice to your son Jack when he decided to pursue a career in acting?

Dennis Quaid: I tried to help him get an agent because my agent has been wanting to represent him since he was about four. But he said he wanted to do it on his own. Anyway, he went out and got his own agent. His first movie was The Hunger Games, then he was in Martin Scorsese’s Vinyl. So I was like, “Hey, Jack, how about a little help over here, man?” (laughs) I’m not proud at all abut that. Why not? Sure. I’ll take a little help. But I’m so proud of him. He’s just working all the time, and I think he’s really something.

Melissa Parker (Smashing Interviews Magazine): What can the fans expect from the concerts?

Dennis Quaid: We have a very high-powered show. We have a money-back guarantee. We’re one of the only bands to do that if you’re not having a good time. People spend their hard-earned money to be there after working all week, and they just want to let go of everything, so we try and give them a good time.