Brad Arnold Interview: 3 Doors Down Takes "Open-Minded" Approach on "Us and the Night"

Image attributed to 3 Doors Down 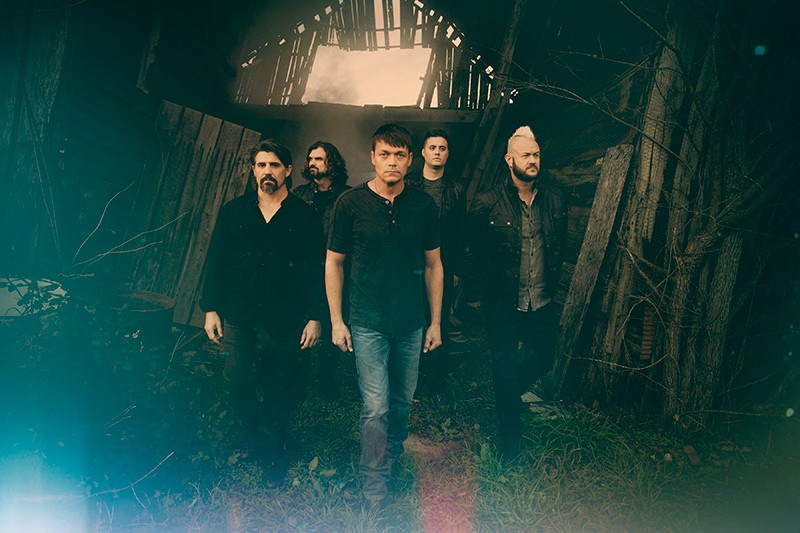 3 Doors Down made their mark early, selling six million copies of their debut album, The Better Life, that included the songs “Kryptonite,” “Loser” and “Be Like That,” all three reaching the Billboard Hot 100 charts. Since the beginning of their career, the band that was formed in Escatawpa, Mississippi, have sold over twenty million albums worldwide and have shared the stage with artists such as ZZ Top, Nickelback, Lynyrd Skynyrd, Daughtry, Alter Bridge, Megadeth and Seether.

The sixth studio album by 3 Doors Down, Us and the Night, is released March 11, 2016. It is the first studio album since Time of My Life (2011). The band’s current lineup is Brad Arnold (lead vocals), Chris Henderson (rhythm guitar, lead guitar), Greg Upchurch (drums, percussion), Chet Roberts (rhythm guitar) and Justin Biltonen (bass guitar).

"We just didn’t want to make another … obviously, it’s a 3 Doors Down record. But we didn’t want somebody to hear it and say, 'Oh, they just made another record.' We definitely wanted an element of surprise, but not like, 'Holy cow! What were they thinking?' We wanted to still be us and stay true to ourselves, and at the same time, have some new stuff that might catch people off guard and give them some different stuff to listen to."

Melissa Parker (Smashing Interviews Magazine): Brad, the last time we spoke, you were riding a tractor on your ranch (laughs).

Brad Arnold: (laughs): Yes, I was. It won’t be long until it’s time to be out riding the tractor again.

Melissa Parker (Smashing Interviews Magazine): Us and the Night is the first studio album in five years. Why the wait?

I am glad to say now that the band is in the best place it has ever been in. It has been a little while since we put a record out, but I am so excited to have this one out. It’s going to be a blast this time.

Melissa Parker (Smashing Interviews Magazine): Tell me about the personnel changes and the musical contributions from the “new guys.”

Brad Arnold: Both of the guys were with us last time I talked to you, but we were just kind of getting into their contributions. We’ve got a new bass player and a new guitar player. Those guys have really contributed a lot to this new record. They’ve definitely brought some new flavors and some new sounds, and those new flavors and sounds are definitely welcome. We’re thrilled to have these guys.

After you’ve been writing as long as we have, it’s easy to start repeating yourself. That didn’t contribute to the band member changes, but having those new guys definitely brought about some new sounds. But it wasn’t all them. We were just ready for some new stuff, to write in some different ways, to open up our horizons a little bit and try some different things.

We just didn’t want to make another … obviously, it’s a 3 Doors Down record. But we didn’t want somebody to hear it and say, “Oh, they just made another record.” We definitely wanted an element of surprise, but not like, “Holy cow! What were they thinking?” We wanted to still be us and stay true to ourselves, and at the same time, have some new stuff that might catch people off guard and give them some different stuff to listen to.

Melissa Parker (Smashing Interviews Magazine): Who came up with the title?

Brad Arnold: We’ve always named a record after a song. It just seemed like a cool title really (laughs). Sometimes the name may come from a lyric out of a song like Another 700 Miles, but we generally like to name the record after a song or after something that is meaningful to us.

When we wrote the song, “Us and the Night,” it kind of stuck out, and we said, “Yeah. I think that would be a cool title for the record.” We had that as a working title for a while, and it just stuck. We never came across anything we thought would be more appropriate. That’s us, you know? Riding down the road in a bus. It’s us and the night.

Melissa Parker (Smashing Interviews Magazine): “In the Dark” is moving up the Billboard chart.

Melissa Parker (Smashing Interviews Magazine): Did you expect that to happen?

Melissa Parker (Smashing Interviews Magazine): Did you write all the lyrics for every song on the album?

Brad Arnold: I did, except for the last song that was on the bonus version CD called “Walk Before You Run.” Actually, Greg, our drummer, wrote that whole song, music, words, everything. I encourage people to listen to the bonus track version because that’s definitely a different song. I really dig that song. Aside from that song, I did write all the lyrics.

Melissa Parker (Smashing Interviews Magazine): The line, “She likes to do it in the dark,” is certainly sexy. What were you thinking when you wrote “In the Dark”?

Brad Arnold: That song was actually originally written by Chet on his iPad on GarageBand. Chet is one of those guys that can take an instrument he’s never picked up before. Give him two hours, and he’ll have you a song of some sort. It definitely got a lot edgier as we started working on the song. But it started out with him on the bus just playing this funky thing and me saying, “Man, that’s good!” He said, “You like that?” I said, “Dude, I’m telling you. That right there could turn into a hit song. You watch.”

It had been a while since he came up with that riff. The song grew and got that hard edge on it. It was just so catchy. I wish everybody could hear what it started out like. It was just a programmable instrument on there. That’s the way it started. I got him to burn it off of there onto a CD for me and just put some structure to it to where it would be a version of the chorus and that hook. I just thought, “Man, that sounds like a dance song.” I imagined a club with people dancing.

The first line that came to me was, “She likes to do it in the dark.” I took it home. I played it for my wife, and she’s a wholesome country girl. She likes music I wouldn’t listen to, and I’m sure I listen to stuff she wouldn’t listen to. I played the riff for her. She said, “Oh yeah. You’ve got to write that, baby! That’s cool. I like that.” It went from there. I just had to make up the rest of the words to go along with it (laughs).

Melissa Parker (Smashing Interviews Magazine): How did “The Broken” come about?

Brad Arnold: If I’m not mistaken, that was another one that started as a little riff from GarageBand also. “This is the call to the broken” was the first thing I thought of with all that’s going on in our world. I don’t like to think of the world as a doom and gloom place. I like to think of the world as hopeful. Everybody talks about how bad the world is. I think we live in a great world. It’s just up to us.

Brad Arnold: I like “The Broken” a lot. That’s one of my favorite songs on the album. I like “Pieces of Me.” It just varies. I really like “Believe It” also. To me, that song is almost like Jon Bovi’s “Livin’ on a Prayer.” People don’t really write songs like that much anymore, ones that tell stories. It just tells a story about believing in himself when nobody else did. That song was just inspired from the old Jon Bovi songs and things like that.

Melissa Parker (Smashing Interviews Magazine): Do you see the band continuing in this direction of new flavors and sounds?

Brad Arnold: We really haven’t thought about it. Honestly, we really didn’t think that way about this one. We were very open- minded. Whatever happened, we just wanted to let it happen. I think you can tell when you hear this record that it was written very open-mindedly. We just wanted nothing to be out of bounds.

Those two bonus tracks really reflect a different sound because “Walk Before You Run” is like an old 60s Beatles song. It’s very soft and melodic. It’s really hard for me to describe the album as a whole because it goes into a lot of different directions. If I had to describe it in any way, it would be “open-minded.” That’s just how we want to go forward. Nothing is out of bounds.

Sometimes in the past, we may have been like, “Well, that may be a little too far this way or that.” There’s no reason to be that way. Any song we record is going to sound like a 3 Doors Down song. That’s all there is to it. That’s who we are. At the same time, let’s do some different stuff. Like I said earlier, it’s easy to get in that rut. We always said in the beginning that we would never pigeonhole our sound. But to be honest, with the last couple of records, it was getting there. We were starting to make songs that were sounding the same. We did not want to do that this time.

Melissa Parker (Smashing Interviews Magazine): To not allow the music to become stale or stagnant?

Brad Arnold: Absolutely! That’s probably the best way to put it. We felt like we were getting a little stale. That’s just honest. We wanted it to be fresh.

Brad Arnold: Yeah. We do have some scattered out dates. It’s still evolving, and dates are continuously being booked. But, I guess, in a way, the Orlando show is the kickoff. It’s cool. Over the years, we tend to kick off a lot of our tours in Orlando. It’s a great place down there, and we always enjoy going.

Melissa Parker (Smashing Interviews Magazine): Do you derive the same amount of enjoyment performing live as you did in the beginning of your career?

Brad Arnold: I do. Every show’s different. Some are better than others. Some days you have a better attitude than you do other days. But I am really excited about this tour for many different reasons. The band is tighter than we’ve ever been, personally and musically. We’re all on the same page.

Melissa Parker (Smashing Interviews Magazine): Continued success on the new music, Brad, and thanks for taking the time today.

Brad Arnold: Thank you for taking the time for the interview. I look forward to talking to you again.

« Rod Argent Interview: "It Sounds Completely Bananas, but It Feels like the Zombies Are an Emerging Rock Group"
Craig Chaquico Interview: Jefferson Starship Guitarist on the Quest to Recover His Beloved Ax and the Passing of Paul Kantner »