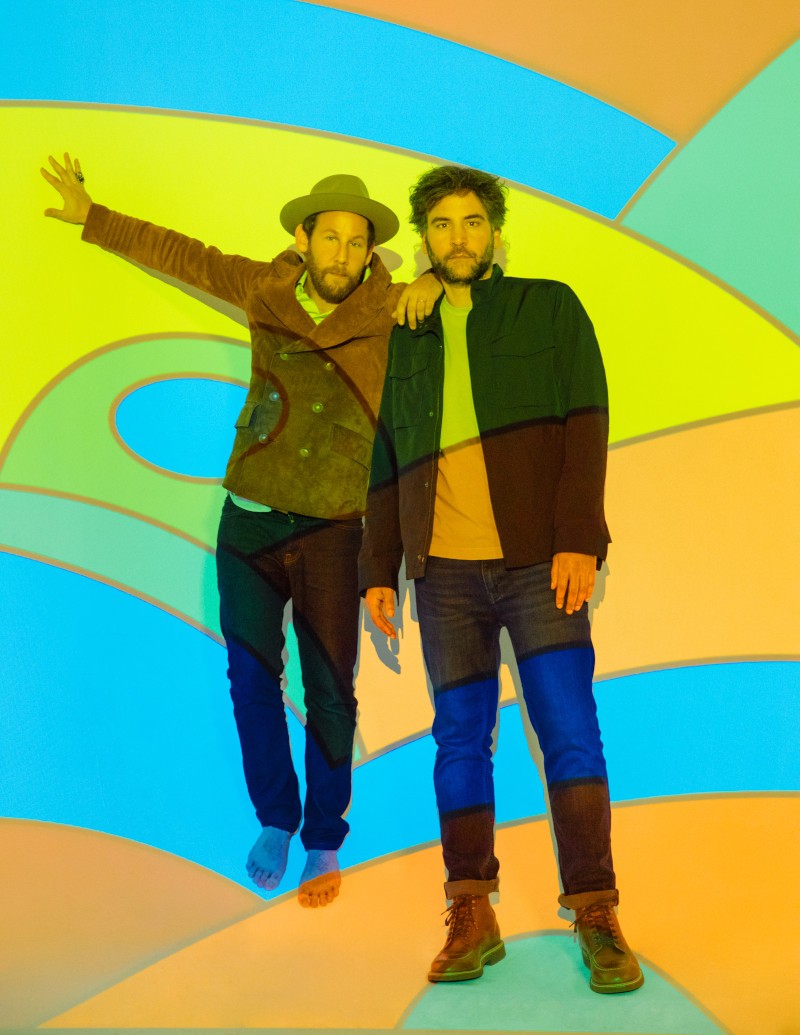 Australian musician and actor Ben Lee began his career at the age of 14 with the Sydney band Noise Addict, but focused on his solo career when the band broke up in 1995. He has released 11 solo albums. In 2016, he released an acoustically-oriented album entitled Freedom, Love and Recuperation of the Human Mind, and in 2017, he recorded a children’s album called Ben Lee Sings Songs About Islam for the Whole Family. November 2017 also saw the release of Radnor & Lee, a collaborative album Lee made with former How I Met Your Mother star Josh Radnor. Lee has one child with actress Ione Skye.

On June 19, 2020 (originally scheduled for May 8, but postponed due to the coronavirus), Radnor & Lee will release their anticipated sophomore album Golden State on Flower Moon records, a Los Angeles-based record label owned and operated by Azure Ray’s Maria Taylor. Golden State was written and recorded by Radnor & Lee and produced by Justin Stanley (Beck, Eric Clapton, Sheryl Crow).

“Well, initially we had a more obtuse name. It was just so complicated. You know, it’s been interesting. I think a big part of becoming an artist or a project reaching its full expression is kind of a discovery of what it wants to be, not what you want it to be.”

Smashing Interviews Magazine: Ben, why did you and Josh decide to name the band Radnor & Lee?

Ben Lee: Well, initially we had a more obtuse name. It was just so complicated. You know, it’s been interesting. I think a big part of becoming an artist or a project reaching its full expression is kind of a discovery of what it wants to be, not what you want it to be. I think a lot about Radnor & Lee, and what we’ve discovered is that it wants to be connected to what being almost like a folk duo is, and there’s a classic sense to that, you know? It’s something rooted in a more 70s expression of music. So I think it’s a name that’s sort of like, “Ooh, that just feels right. It feels like that’s what it wants to be.”

Smashing Interviews Magazine: You and Josh are described as an Indie folk musical duo. Is that accurate?

Ben Lee: To me, that’s more about picking which aisle in the supermarket you want your product in. It’s nothing really that’s important to me, like how it’s defined in terms of the name of the genre or anything. But I think for the label and stuff, it becomes sort of important on something like Spotify. I find it acceptable. It’s an acceptable description.

Smashing Interviews Magazine: I believe the songs on Golden State have something to do with Brazil and LSD?

Ben Lee: Yeah. I think both Josh and I feel that music is very connected to sort of altered states of consciousness, at least the music that we both like is. And so naturally, that and Brazil was like a really holy matrimony, you know what I mean? The deep part of the story is just how unexpected this expression was to us. Whatever happened over there with those strange experiences, it’s almost like the music came down to our bodies, and I think that changes music, music that is made for the body not just for the mind.

Smashing Interviews Magazine: Was there a preconceived idea or theme for Golden State?

Ben Lee: No, I don’t think we had an idea. We had a feeling. It’s funny like the word “cool" is an interesting word because on one hand, it seems elitist like, “Oh, that’s cool, and that’s not cool,” or “Those people are cool, and those people aren’t cool.” But when it’s applied to music and to culture, cool is talking about a confidence in movement. It’s saying when someone is cool and knows they’re cool, they move a certain way, and the rhythm is a certain way. I think that was the feeling.

When you get into your 40s, it’s almost like you get cooler because you really do stop caring what people think in the wrong ways, and you start hopefully feeling cool with what you’re becoming or what you’ve become, what your particular contribution is going to be to your community or to your art form or to your family. You feel yourself, I guess. It’s interesting to think about that because the rock and roll mythology says that you get less cool as you get older. But I think, in the deepest sense, you actually get more cool, and the beautiful thing about that is that younger people can’t recognize it often because it is a type of cool that they don’t have any reference points to.

Smashing Interviews Magazine: I’ll certainly agree. I also think you’re more cool as you get older and are perhaps more comfortable doing your own thing.

Ben Lee: Yeah. Where are you?

Ben Lee: And I’ll tell you something else. I got really into this album by Willis Alan Ramsey from Birmingham, Alabama. His album’s amazing. He made one album, and these people would say to him, “Are you ever going to make another one?” He’d say, “What’s wrong with the one I made”? (laughs) That’s the coolest (laughs).

Smashing Interviews Magazine: That is the coolest (laughs). What’s your favorite song on Golden State?

Ben Lee: It’s almost like the lyrics of some of the songs more express Josh’s viewpoint, and the music more expresses mine. I’ve made a lot of my own records. I haven’t been needing, with this project, to express myself through the lyrics because that’s something Josh was so, so hungry for. I usually try to find and create a world with him that we can meet in to really express something he has to say. In the music, it’s a mixture of trying to respond emotionally and also trying to see what I can get away with because Josh is also used to having a lot of control in his art (laughs).

So you get two people who are used to having a lot of control, and there’s going to be power struggles. So I think that’s actually what makes this fun. Anyway, when I’m thinking about the songs, it’s almost like the ones I’m fondest toward are the ones where I feel he got to say something that was innate to his soul, and then hopefully, I was able to support that. Funnily, one of the songs that I feel is the closest to what he had to say is the only song I sing, which is “Ohio,” because we both agreed on that in a sense that we both had similar experiences of running away, finding an escape hatch from our childhood.

Smashing Interviews Magazine: “Outside In” is a great song.

Ben Lee: Yeah. That is really good. “Good Enough,” I think, it my favorite. I see some kind of other universe probably where it’s almost like a massive romantic hit for couples to slow dance to. Sometimes, these things are just fantasies (laughs).

Smashing Interviews Magazine: You have a seasoned music career and a lot of experience in that area, and Josh has primarily acting roles under his belt. Do those differences make it more difficult for you and Josh to create music?

Ben Lee: Well, it’s just like I’ve never really been in a band, and I was very curious about that because I’ve seen a lot of my contemporaries having those experiences of being in a band. I was curious about all that stuff. There’s a great quote from a guy called Chesterton: “Marriage is a battle to the death from which no man of honor should decline the request,” or something like that. It’s like you have to find a worthy adversary. I find my wife intriguing and baffling in all of the appropriate ways to have a happy marriage. She’s like a mystery, but she’s strong. I think I knew if I was going to have a real corroboration, it would have to be with a very strong personality because I would overpower them otherwise because of my experience and my natural tendencies. So that really worked quite well, and I think Josh is innately more popular than I am, not in a bad way but I think he cares more about communicating with the world than I do.

I am interested in abstraction. I like being confused, and I like confusing the audience. I’ve always thought that was one of the more noble things an artist can do, whereas Josh is not that interested in that. He wants to talk to them and be in a dialogue. So these are different sensibilities, but together it’s quite powerful because the idea has to be very strong. Like Keith Richards always said, “I like songs written by two people rather than songs written by one person.” I wouldn’t necessarily go that far, but there is something about the idea of having to pass it through two filters.

Smashing Interviews Magazine: You released Quarter Century Classix, a covers album, in 2019. Did you find it difficult to find your own style on the songs?

Ben Lee: It’s almost like it had to happen naturally. I’d known those songs for so long, I wasn’t really going back to the recordings that much because I know them almost like in my DNA. I think there was only one song I tried that I couldn’t make my own, and that was “Carnival” by Bikini Kill. I just couldn’t make it convincing, so I didn’t do it (laughs).

Smashing Interviews Magazine: Will you be recording another solo album soon?

Ben Lee: Yeah. I’m getting ready. I’ve got the songs. I always say songwriters are notoriously untrustworthy when they say this, but I think I’m writing the best shit I’ve ever written (laughs). It’s not really for me to say, but I think so.

Smashing Interviews Magazine: Is your ten-year-old daughter a fan of your music?

Ben Lee: She likes it. She’s just kind of really getting into listening to music. Her playlist includes “Yesterday” (Beatles), “Martha,” (Tom Waites), “Old Men Young Women” (Lori McKenna), “Heart of Gold” (Neil Young), “Jesus Was a Crossmaker” (the Hollies), “God” (John Lennon), “Where Do the Children Play”? (Cat Stevens). Goldie’s like, “I think I’ve got your taste in music.” She’s got a whole breadth of musical knowledge, but she often leans in the direction of new wave and hip hop. She loves everything. She’s put up with me listening to country and folk music for so many years. But I think she’s leaning a bit more to my taste.

« Kathy Valentine Interview: "The Go-Go's Were Very Dysfunctional and Very Toxic"
Suzi Quatro Interview: "I Realize That I Really Changed the Game for Women" »