Jason Priestley Interview: "I Was More Than a Little Intimidated to Direct the Great Mr. Richard Dreyfuss" 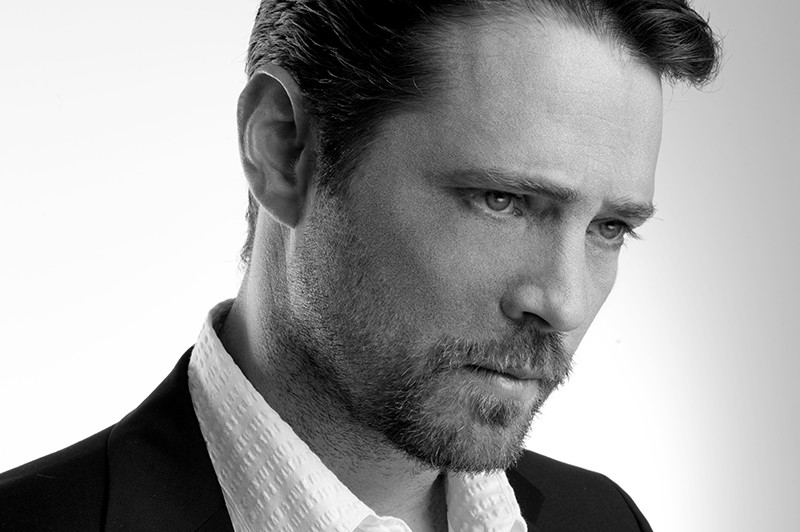 Born on August 28, 1969 in Vancouver, British Columbia, Canada, actor, director Jason Priestley is best known as the virtuous Brandon Walsh on the television series Beverly Hills, 90210 and for his role as Richard “Fitz” Fitzpatrick on the Canadian show Call Me Fitz.

Other TV appearances include Airwolf, 21 Jump Street, Saturday Night Live (host), Without a Trace, Above and Beyond, My Name is Earl, Psych, How I Met Your Mother and Hot in Cleveland. He directed his former co-star, Luke Perry, in the Hallmark Channel movie Goodnight for Justice.

"I’m not going to lie to you. On day one, I was more than a little intimidated to direct the great Mr. Richard Dreyfuss. He is a phenomenal actor, a wonderful guy and a great storyteller. We had a wonderful time working together. He is a prince among men."

Films include The Boy Who Could Fly, Tombstone, The Thin Pink Line, Dill Scallion, Eye of the Beholder, Lion of Oz, The Highwayman, Zigs, The Fourth Angel, Cover Story, Going the Distance, Made in Brooklyn and Enter the Dangerous Mind.

Melissa Parker (Smashing Interviews Magazine): Jason, as a first time feature film director, how would you rate the experience, terrifying or smooth sailing?

Jason Priestley: (laughs) It was fantastic. I really had a great time. I’ve been directing television and TV movies and music videos for the last 22 years. But the filmmaking process is the filmmaking process because when you direct feature films, you have to tell the story at a slightly different pace and at a different scale. It’s just a slightly different process. For me, I was very thankful that I took as much time as I did to direct my first feature because I needed every bit of experience that I had gleaned over the last 20+ years to get through it.

Melissa Parker (Smashing Interviews Magazine): Why were you attracted to Cas & Dylan?

Jason Priestley: I loved the scale of this film. It felt like the right size of film to tackle as my first feature. It’s a relatively simple story about an unlikely friendship between two people, but I felt like I could make it feel like a much bigger film than it really was because of the road-movie element. Hopefully I succeeded in that.

Melissa Parker (Smashing Interviews Magazine): There were laughs and tears, so you did a great job. Were you nervous to direct storied actor Richard Dreyfuss?

Jason Priestley: (laughs) I’m not going to lie to you. On day one, I was more than a little intimidated to direct the great Mr. Richard Dreyfuss. He is a phenomenal actor, a wonderful guy and a great storyteller. We had a wonderful time working together. He is a prince among men.

Melissa Parker (Smashing Interviews Magazine): Are you a totally hands-on director, or do you let the actors play around a bit with the characters?

Jason Priestley: I knew that this film was going to live or die based on the relationship between the two characters of Cas and Dylan, so I fought very hard to have a week of rehearsal time with those two actors and myself. I got that rehearsal time, and that was invaluable for us.

The three of us worked very hard during that time. So much so, that when we actually got to the set, I was able to give them a lot more free rein that I wouldn’t have otherwise because a lot of the heavy lifting had been done already in the rehearsal period. That was sort of a very long answer to your short question (laughs). Because we rehearsed so much before, I was able to let the actors play a little bit more than I would have otherwise.

Melissa Parker (Smashing Interviews Magazine): Why the interest in directing all those many years ago?

Jason Priestley: I’m not exactly sure. It started for me back when I was in high school. I started directing theater. I think it’s because I always just liked to dig deeper than just taking care of my part. Your focus as an actor is very myopic, and you’re just worried about your character and your place in the scene, where you’re coming from and where you’re going. I was always more concerned about the big picture and the whole piece. I find that to be equally, if not more interesting because there are more moving parts to it. I always try to tackle more than just my piece.

Melissa Parker (Smashing Interviews Magazine): Very interesting. Was your mom an influence for you to pursue acting?

Jason Priestley: Well, I was raised in a family where the opportunity to get into show business was presented to me. My mother was a singer, dancer and choreographer, so the opportunity was there for me. If it wasn’t for my mother, I don’t know if I would’ve even known how to get into it. So yeah, my mother did have an influence on me getting into the business in the first place. Absolutely.

Melissa Parker (Smashing Interviews Magazine): Would you ever direct yourself in a film?

Jason Priestley: In a film, I’m not sure. I’ve directed myself in a lot of television and TV movies, but feature films are a whole other enchilada. Films are big and important. Not that television’s not, but films are all consuming in a way that sometimes it would be too much.

Melissa Parker (Smashing Interviews Magazine): Do you have a particular film that has been the most influential for you over your lifetime?

Jason Priestley: I usually go back to films that were made before my lifetime. The films I seem to go back to more often than not are Citizen Kane and Bringing Up Baby. I keep going back to those films. Apocalypse Now is a film I watch over and over. I love the classics.

Jason Priestley: I have a film coming up later this year called Zoom with Gael Garcia Bernal. That will be out probably in the fall. I’m on my way to Newfoundland to go shoot a feature called Away from Everywhere with Shawn Doyle and Joanne Kelly.

Melissa Parker (Smashing Interviews Magazine): Are you still into racing?

Jason Priestley: I’m not really involved in racing anymore. My kids fill up my time away from set, and trust me, they’re good at it.

Melissa Parker (Smashing Interviews Magazine): Have the kids shown a penchant yet for show business?