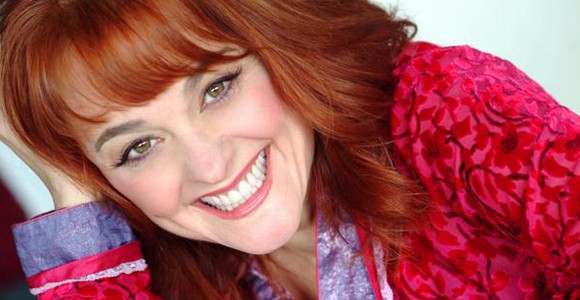 Known for brilliantly poking fun at her Hollywood comrades, Julie Brown’s original claim to fame was her award-winning parody Medusa: Dare to be Truthful, for Showtime Networks, in which she spoofed the one and only Madonna.

With her talented knack for both acting and singing, Brown has captured roles on hit shows including CSI, Six Feet Under, The Edge, The Wizards of Waverly Place, Laverne & Shirley, Murphy Brown, Quantum Leap, The Jeffersons, and Comedy Central’s Strip Mall.

"I like a song that gets me excited or the idea of a song or the performer. When Lady Gaga came out I really became aware of her and was amazed and blown away by her."

Brown hosted her own comedy show Just Say Julie on MTV for several seasons and portrayed Millie in the ABC sitcom Clueless. Musically, her first album, Goddess in Progress, caught fire all across the globe while her singles, “Girl Fight Tonight,” “The Homecoming Queen’s Got a Gun,” and “I Like ‘Em Big and Stupid” each received heavy airplay throughout the country.

In late 2008, Brown released a political parody single, “The Ex-Beauty Queen’s Got a Gun,” which became a pop sensation nationwide. When not in front of the camera or in the recording studio, Brown is a successful writer who penned and co-starred in the breakout Jonas Brothers film, Camp Rock. 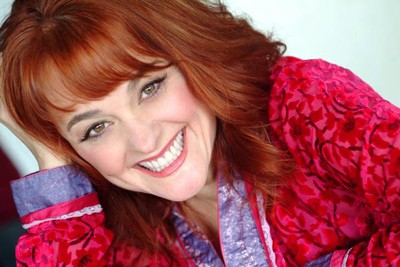 Julie Brown: I went out with my boyfriend and my family so that was fun.

Melissa Parker (Smashing Interviews Magazine): Your latest singles, “Another Drunk Chick” and “Big Clown Pants” are hilarious! Who else do you parody on the new album, Smell the Glamour?

Julie Brown: You know, I did that special on Madonna a long time ago and those songs never got released so I put them on the record. Then I did an updated version of “Vague” for 2010 because there are more “vague” celebrities than there were before. So I do parody Madonna, Ke$ha, and Lady Gaga on this album, but the rest are original songs.

Melissa Parker (Smashing Interviews Magazine): Julie, how do you choose the songs you parody?

Julie Brown: I like a song that gets me excited or the idea of a song or the performer. When Lady Gaga came out I really became aware of her and was amazed and blown away by her. I thought, “I’ve got to do something!” She’s so outrageous so I just had to do something that was a little more crazy than what she would do like being sexually attracted to clowns. She’s not quite going to do that.

I love her music and she’s so funny. The thing is I don’t know if she thinks she’s hilarious, but I think she’s hilarious. The Ke$ha song is really catchy, but what it’s about is so stupid that it’s like, “Okay, I have to do this song and push it farther.” That’s what you do. You just take what they’re doing and push it farther. I thought the song celebrating being drunk was really funny.

Melissa Parker (Smashing Interviews Magazine): Does it take you a long time to write the lyrics for a parody?

Julie Brown: It’s a certain amount of work and more work than it probably looks like (laughs). It’s harder than it looks because you have to make it rhyme. It has to make sense in the context of that song and that concept you came up with. You’re a writer. Writing takes longer than it looks, right?

Melissa Parker (Smashing Interviews Magazine): Right. Copyright is not involved in any of these songs?

Julie Brown: No, Weird Al does do that, but he gets permission from the artists. He’s in his own category because they go, “Okay, he’s Weird Al so I’ll let him do the song.” If I did that it would take me months with lawyers just to get through that whole thing.

If you just change the song and alter the notes enough, it’s not really their song anymore. If you try to get permission they can restrict what you can do and they may want to see the lyrics beforehand. There are many problems with that.

Melissa Parker (Smashing Interviews Magazine): They can have control over your work.

Julie Brown: Exactly, so in the long run, unless you’re Weird Al it’s not worth it.

Melissa Parker (Smashing Interviews Magazine): Have you and Weird Al ever thought about collaborating on a song parody?

Julie Brown: We probably should! He was on my first MTV show and is such a nice guy. After this record comes out I should contact him and say, “Let’s do one together!” That’s a really good idea! No one has said that to me. I’m going to look for some kind of duet that everybody’s really into, call him up, and say, “Okay, let’s do it!”

Melissa Parker (Smashing Interviews Magazine): I’ll look forward to that one, Julie. Have you ever gotten comments from the people you have parodied?

Julie Brown: Yeah. When I did my first special, Madonna had her agent call my manager to say she really liked it. But I heard through the grapevine that she didn’t like the cemetery scene where I took a camera crew to my dog’s cemetery. You know, she took a camera crew to her mother’s cemetery and I thought that was a funny way to satirize that, but she didn’t like that. 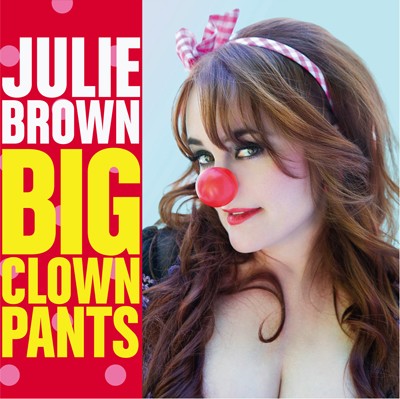 I thought, “How insane is that to take a camera crew to your mother’s grave?” I thought she was kind of asking for it with that stunt. There was a scene on the special where I pretend the dancers are suing me and her dancers really did sue her. She did not like that either.

Melissa Parker (Smashing Interviews Magazine): Have you had any comments from Sarah Palin (“The Ex-Beauty Queen’s Got a Gun”)?

Julie Brown: No. I think the thing is when I did Sarah Palin there were so many satires about her. I think she just focused on Tina Fey. I want to do her again for her buildup to the 2010 election. I think it would be funny to do her preparing herself because somehow, she’s going to be on the scene.

Melissa Parker (Smashing Interviews Magazine): Is there a line you won’t cross if you feel like it would hurt someone?

Julie Brown: Oh yeah, of course. I wouldn’t want to make fun of their kids in a really hurtful way. When I did that song about Sarah Palin her daughter really was pregnant, but I wouldn’t make fun of her baby who’s retarded. I try not to do things that are truly mean because it makes me feel bad.

One time I was on a sketch show and they had me do Carnie Wilson in a fat suit. I wanted to do Chynna because I felt bad about that. She called me and thought it was funny, but in general I don’t want to be really mean. Some comics are really mean.

I can’t even watch those roasts on Comedy Central. It was a Joan Rivers roast and they were saying how ugly she was and I think that was mean. Attacking someone physically makes me cringe and I don’t like that. I felt bad about Carnie Wilson. I’m glad she liked it, but I didn’t feel 100% comfortable with it.

Melissa Parker (Smashing Interviews Magazine): Julie, have you always wanted to be a comedian?

Julie Brown: No. I was always doing shows and doing funny things. But I won the Science Fair in Junior High School so I thought I was going to be a scientist for about four years. I got into majoring in anthropology after I had done these plays and had written music in high school and I thought, “Oh my God, this is not fun at all!” So I went right back to theater comedy.

Julie Brown: Yeah, that was part of it, too. My great grandfather was an actor and director. He was in Citizen Kane and Reefer Madness. There are film editors on both sides of the family. My mom and dad met at NBC where my dad worked my entire childhood. They always said, “Oh you can’t go into show business, you just can’t.” That was partly why I didn’t think I could go into the business. But as soon as they saw I was headed for it, they said, “Okay, alright.” They saw that there wasn’t much they could do to change my mind.

Julie Brown: Yes, she was amazing! I was doing a show in San Francisco and I contacted her. That’s the kind of nervy thing you do when you’re 21 years old. Anyway, she came and was really sweet. I wrote her a letter when I moved back to Los Angeles, she got me a part in The Incredible Shrinking Woman, and I got my SAG card.

Melissa Parker (Smashing Interviews Magazine): You wrote the comedy film Earth Girls Are Easy. Jim Carrey was virtually unknown at that time. Were you two friends and that’s how he got the part of Wiploc in the movie?

Julie Brown: No. I knew Jim a little bit from standup clubs. They told me that Jim Carrey is going to do the part of the crazy alien and I said, “Ah, I don’t know.” At that point everything he was doing was so grotesque and over the top. Then when he got to the set I realized he was a great choice. He would make such ugly faces! We’ve all gotten used to him now, but then I thought, “Oh my God, he’s just so intense!”

Melissa Parker (Smashing Interviews Magazine): You have The Wish List on Hallmark out now.

Julie Brown: Yes, I play a wedding coordinator. Camp Rock 2 is out, too. My brother and I wrote the first four scripts. When we finished the first one (Camp Rock), they said, “Oh, the Jonas Brothers are going to be in it.” I said, “Who?” But I did realize they were great.

We actually had to change the name of the script when we were shooting in Canada because some girls up there were trying to find them. So shooting was insane. I played the camp counselor in the first one. Disney wanted to change the story for Camp Rock 2 and my character wasn’t in it, but I still got credit for being the creator.

Julie Brown: Yeah, I’m a writer on the show. That show is adorable.

Melissa Parker (Smashing Interviews Magazine): Julie, who were your comedic influences throughout your life?

Julie Brown: Lily Tomlin, Lucille Ball, the original SNL cast, Monty Python, and Jonathan Winters. I thought Jonathan’s comedy was really absurd and funny. He was attracted to character comedy more than standup. He was brilliant. Those are the people that made me go, “Oh my God!” That group of people made me realize this was something I could do.

Melissa Parker (Smashing Interviews Magazine): Are you on the road now?

Julie Brown: No, because I’m writing a show and I have a teenager. I’m going to start performing more because of this record and that will start in October. I haven’t been performing because I’ve been writing, working, and being a mom. I have a 16 year old who’s in high school so I can’t really go on the road. They need you and that’s a big deal. He’s really awesome.