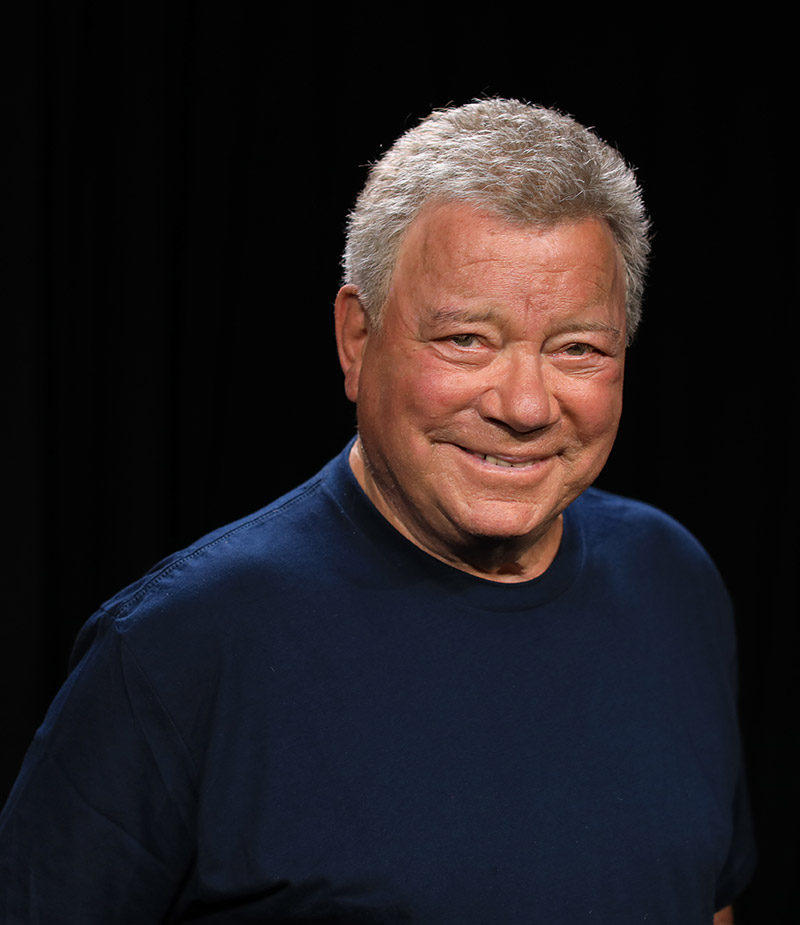 Canadian-born William Shatner is an actor, recording artist and author. He is best known for his portrayal of James T. Kirk in the Star Trek franchise as the captain of the starship Enterprise. After Star Trek was cancelled, “Trekkies” began organizing conventions, and Captain Kirk became a cultural icon. Shatner also starred in several Star Trek science fiction films.

Outside of Star Trek, he starred as attorney Denny Crane in Boston Legal and played a veteran police sergeant in T. J. Hooker. He hosted the reality-based television series Rescue 911 from 1989 until 1996. Shatner also appeared on the reality-travel show Better Late Than Never for two seasons with Henry Winkler, George Foreman, Terry Bradshaw and Jeff Dye.

"Connection. Everything is connected, from the enormity of space and exploding stars and burgeoning constellations to the most minute thing on earth. It all has beauty, and that beauty, which on earth took five billion years to evolve, is going extinct."

Shatner took part in Blue Origin’s second sub-orbital human spaceflight, Blue Origin NS-18, on October 13, 2021. He became the oldest person to fly into space at 90 years, 6 months and 22 days. In his recently released book, Boldly Go: Reflections on a Life of Awe and Wonder, Shatner reflects on the interconnectivity of all things, our fragile bond with nature and the joy that comes from exploration in this inspiring, revelatory and exhilarating collection of essays.

Smashing Interviews Magazine: How are you, Bill?

William Shatner: Oh, my God! I am so good.

Smashing Interviews Magazine: What are you trying to tell us in Boldly Go?

William Shatner: Connection. Everything is connected, from the enormity of space and exploding stars and burgeoning constellations to the most minute thing on earth. It all has beauty, and that beauty, which on earth took five billion years to evolve, is going extinct. I talk about the tragedy that that is and how we must muster every bit of energy to correct that otherwise. The dedication of the book is to Clive, my great grandson, and he will not have a place to go.

Smashing Interviews Magazine: You say, “I find it distasteful that we judge people by the worst moments in their lives.” Are you alluding to cancel culture there?

William Shatner: No. I don’t even know what cancel culture is really. You know, we make up these names, and it’s the same thing either young people have been doing in their ferment or it’s another name for another kind of rebellion. I think rebellion is good. No. I’m not alluding to anything hidden. I don’t need to hide. I’ll say it out loud.

Smashing Interviews Magazine: You’ve also said that life is a joke. What do you mean by that?

William Shatner: Well, it’s a profound joke, isn’t it? I mean, were all taking ourselves so seriously and most of us do or die and enter the legion of unknowns who have lived and died since even before we emerged from Africa. But the billions of people who’ve lived and died, and everybody, whether they were known necessarily or not, has become innocuous, and we think it’s so important. And that’s the joke.

Smashing Interviews Magazine: What are some of the things that have made you go “Wow!” during your life?

William Shatner: Love. Dogs. Horses. The stars. E=mc2. My fingers. Making people laugh. The list is endless. We should be saying “Wow” all the time.

Smashing Interviews Magazine: What kind of wild and amazing adventure is next for you?

William Shatner: Ah. Something has happened … I’m on the verge of something that may be really important or not, and that is this. I did a concert at a concert hall in the Washington Kennedy Center at the Opera House. It’s one of the big places in American culture. I performed there a little while ago. One of the songs that Robert Sharenow and I wrote was a song called “So Fragile, So Blue.” It recounted my adventure into space and my feelings. The song is a big hit. The place wouldn’t let me off the stage and all that kind of thing.

Now, it came to, what do we do with the film that I’ve got making a documentary about my performance and the album? I linked myself to a company called Legion M. These bright people at Legion M said that they could do this and that. But in addition to all that, they said, “We’d like to make a music video of “So Fragile, So Blue,” and our hope is that it becomes the anthem to save the world. Like, “We Are the World, “So Fragile, So Blue” might be a rallying cry to stop the destruction of the earth as we know it.

I suddenly realized that may be what I have to do for the rest of my life, that anthem, that piece of music that I helped create and performed. We’re editing it right now to bring all the elements of the song together and visually might be something really important, like really have an effect. What I’m seeing in my imagination is people saying, “Have you seen that music video? Turn it on. It’s free. Just look at it, and it will inspire you to do something about our earth.” That’s my hope, and that’s the possibility of the reason for my life.

William Shatner: I imagine it being incredible.

Smashing Interviews Magazine: I watched videos of you training a beautiful horse, and that was incredible to me.

William Shatner: It’s so much better than what they’ve got on film. It just takes practice.

Smashing Interviews Magazine: What happens between you and the animal when you are working with him?

William Shatner: You know, riding a motorcycle, you can get that engine going just at the exact number of revolutions where it’s working efficiently. The sound is right. The speed is right. The road is right, and you’re on the pipes. You’re in a Zen. There was a book several years ago, Zen and the Art of Motorcycle Maintenance, and it had that concept. People who ride motorcycles can feel that way about their inanimate bikes.

Now, if you’re on the pipes with a horse, the horse is an animate thinking, feeling being. You’re on its back by its permission. You’re on its back, and it’s letting you, saying, “Okay. You can ride me and give me a signal.” I say, “Okay. Why don’t we go to the left?” He says, “Alright. Let’s go to the left.” I say, “Let’s go to the right. Let’s run fast and stop.” He glides to a stop. “Let’s go back.” And then you’re dancing with a ballerina. That’s reining. That’s the name of the sport. Reiners roll back, do fast circles, slow circles. That’s the vernacular of reining. If you’re a reiner, and you’re you’re being at one with the horse, it’s incredible.

William Shatner: We face a dystopian world, what is a very real possibility and getting more and more real with the wars. I mean, who could afford a war at this bloody time? It’s insane. It’s insane in that the future of humanity is at stake in a war now where you’re burning things and using the remnants of the earth to make war material and explode things, and methane gas is coming out of the ocean. I mean, everything that we don’t want to do we’re doing because of this freaking war.

Star Trek has this possibility that, in a couple of hundred or three hundred years from now, we will have solved all this. We will have put polluting industries up into space the way Jeff Bozos wanted to do. We will make park-like the earth, so when we ship some of the people who are working up there down, they enter the beauty of earth like it was meant to be, and we can see how quickly nature rescues itself if we just leave it alone.

I was watching a documentary on the Sudan where they killed everything in the civil war, and then for 20 years, it was Zambezi, and they left it alone. Nature has come back. Elephants, where there were only a few, are now more. Everything has come back. If you don’t let human beings in that area within our lifetime, nature rebounds, if we just give nature a chance and let the wolves run and let the fish multiply. If we can do that, we will save ourselves.

Smashing Interviews Magazine: You’ve been in the public eye since the 1950s. How have you handled fame over the years?

William Shatner: Well, you know, it’s really interesting. One of my granddaughters is in England going to school. She saw this movie Elvis. Have you seen Elvis?

Smashing Interviews Magazine: I have indeed.

William Shatner: So she’s seen Elvis, and she said, “Papa, I forgot how famous you are! Pictures of Captain Kirk are all over! I just didn’t realize!” It’s so normal for people to accost me that I don’t even think of it, and my kids don’t even think of it. “My God, Papa!” (laughs) I had to laugh.

Smashing Interviews Magazine: (laughs) Is there any place you wouldn’t boldly go?

William Shatner: Well, politically. We die so quickly that it’s a shame not to live life at its fullest. By its fullest can mean you jeopardize your life, maybe not seriously like falling out of a building with no parachute. But if you fall out of a building with a parachute, you have every hope that it’ll open up, that there won’t be a breeze to slam you against the building, and you’re able to get yourself into the street and won’t be hit by a car. There’s every reason to take limited chances. What you think is a big deal isn’t really a big deal.

So if you get instruction to drive a fast car in a racetrack, and you think, “Oh, my God! I’m going to kill myself!” You’re not. So why not have some lessons on how to drive the fast car sort of thing? Why not go for the experience where you think you’re in jeopardy, get out of the car and say, “God! That was great!” You walk off, and the rest of the day, you’re tingling with the excitement that you risked your life. That’s the way you should feel all the time, brimming with excitement because that’s what life is in the brief time we’re here.

William Shatner: A great entertainer whose early life was filled with such tragedy and hardship that there is a life one could look at and say, “That’s how to make yourself better than you thought you were.” She was fantastic.

Smashing Interviews Magazine: What do you want your legacy to be?

William Shatner: I know that legacy is a dream. There’s no such thing as legacy. All the great people who have lived, whether they were entertainers on the silver screen or not, there’s nothing. They’re all dust. They’re in books that burned in the Library of Alexandria. There’s no legacy. I’ll tell you what I think that legacy is. I made this talk at Mar-a-Lago in 2015 where there was a Red Cross event. Thousands of people had come, and I was one of the reasons they came. There was a funeral that day. I was there on Saturday night, and on Sunday morning, there was a funeral. I couldn’t get to it because I had this charity event.

« Danny Trejo Interview: Cutting Through the Bullshit
Tom Clavin Interview: The Tragic Loss of a Son and "Last Hill" »