Robert Reich Interview: It Could Take a Generation or More to Heal from Trump 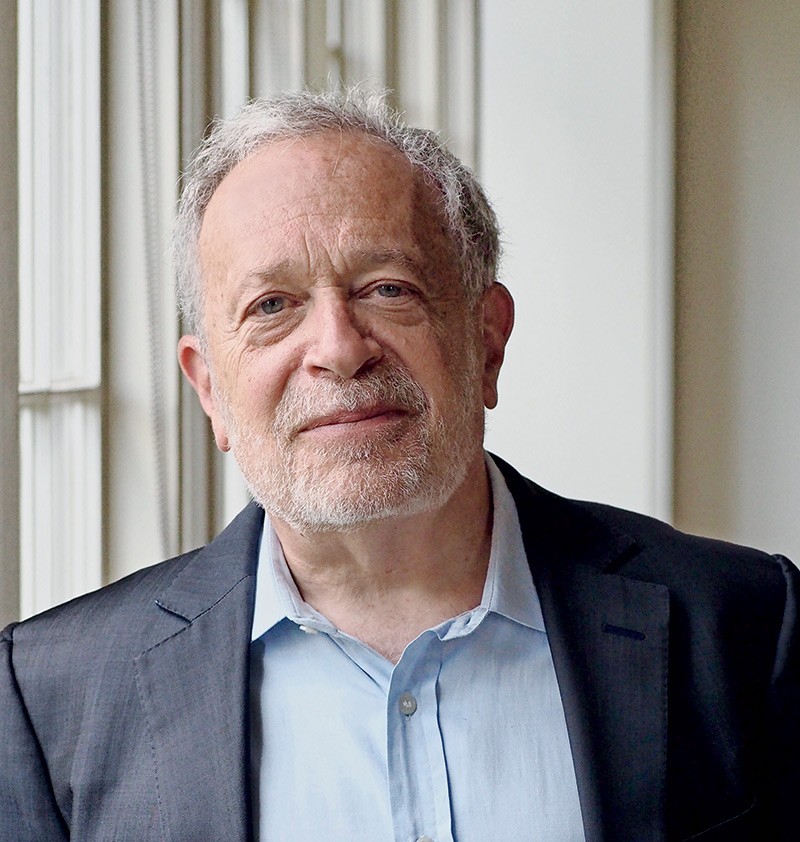 Robert B. Reich is Chancellor’s Professor of Public Policy at the University of California at Berkeley and Senior Fellow at the Blum Center for Developing Economies. He served as Secretary of Labor in the Clinton administration, for which Time magazine named him one of the ten most effective cabinet secretaries of the 20th Century. He has authored the books Aftershock, The Work of Nations, Beyond Outrage and Saving Capitalism, among others. Reich is also the co-creator of the Netflix original documentary Saving Capitalism.

Reich is a founding editor of the American Prospect magazine, chairman of Common Cause, a member of the American Academy of Arts and Sciences and co-creator of the award-winning documentary, Inequality for All. Reich’s latest book is entitled The Common Good. It is a passionate, clear-eyed manifesto on why we must restore the idea of the common good to the center of our economics and politics. Rooting his argument in everyday reality and common sense, Reich demonstrates the existence of a common good and argues that it is this that defines a society or a nation.

"In terms of our place in the world, we’re also going to have to rebuild. Most of the rest of the world sees America under Trump as irresponsible and as no longer a world leader."

Melissa Parker (Smashing Interviews Magazine): Was it Donald Trump and Ayn Rand that inspired you to write The Common Good?

Robert Reich: Well, not really. I had been thinking about these issues for many, many years because Americans’ trust in our basic institutions, government, business, media, banks and so forth has steadily declined over the last five decades. Trump is not the cause. If anything, he’s the consequence or the culmination of this declining trust in our institutions.

Melissa Parker (Smashing Interviews Magazine): Is it actually possible for everyone to have a shared sense of common good?

Robert Reich: No. If we define the common good narrowly to focus on exactly what we want for our families and for ourselves, people are going to have very different attitudes, very different opinions. But if we define the common good more broadly to include and focus on our democratic institutions, the way we solve our disagreements, the rule of law, freedom of the press and free speech, our basic responsibilities to one another as members of the same society, equal protection under the laws and equal political rights, there should be a far greater agreement. It’s not that we achieved these goals. Far from it. But at least in the 30 years after the second World War, we, as a nation, sought to achieve them. We invested substantially in education and infrastructure. We passed the Civil Rights and Voting Rights Acts. We enacted Medicare and Medicaid and the Environmental Protection Act.

We did what we could to advance the ideals on which this nation was founded, but in recent years, we have not. There’s far greater disunity. In fact, we’ve even become warring tribes in some respects.

Melissa Parker (Smashing Interviews Magazine): Has one political party been better at keeping the common good than the other?

Richard Reich: I don’t think it’s fair to credit or blame either party. The parties simply reflect something deeper that’s going on in society. The generation that went through the Depression and World War II emerged with an understanding of how interdependent we are. We need one another.

Patriotism isn’t simply a matter of saluting the flag or singing the national anthem or standing when the anthem is played or even securing our borders. Genuine patriotism entails sacrifice, shared sacrifice, sacrifice paying taxes in full rather than seeking tax cuts or squirreling away money abroad, sacrifices involve volunteering for your community, participating actively in politics and sometimes the supreme sacrifice of serving your country in time of war. But in recent years, we don’t seem to value or even understand that we have a common good. We seem to, without knowing it, adhere to Ayn Rand’s view that selfishness is a better rule of thumb.

Melissa Parker (Smashing Interviews Magazine): How can we all even attempt to come together now when there’s so much divisiveness in the country?

Robert Reich: In the book, I talk about several things that we can do. One of the most obvious is to talk to people who disagree with us and listen carefully to what they say. Be open to their arguments and test our own facts and values by what they say in response. A second thing we can do is to insist that our leaders, both in the private sector and in the public sector, understand that leadership entails building trust in the basic institutions of our country, not simply winning for winning’s sake.

A third is to protect the truth, share the truth, become much better able to differentiate truth from fiction and to take that on as a personal responsibility of finding and sharing the truth. Then another is civic education. I think we need to resurrect civic education in our classrooms, talking about the basic ideals on which this nation was founded and our responsibilities to one another.

Melissa Parker (Smashing Interviews Magazine): Do you think the Trump presidency would ever adopt the concept of “Putting People First,” which would help restore the common good?

Robert Reich: Well, the Clinton administration's “Putting People First" was about public investments, investment in education, infrastructure, public health. I think that’s critically important. Donald Trump has talked about infrastructure investment. I don’t know how he’s going to pay for it because the huge tax cut has taken all of the money. But I’m not going to rule out the possibility that Trump could understand the importance of the common good. That would be kind of a defeatism.

Melissa Parker (Smashing Interviews Magazine): And we should try and remain optimistic?

Robert Reich: Absolutely, and I am generally optimistic. You know, those young people in Florida, their determination and their courage, is inspiring for everyone. I spend most of my days with young people between the ages of 18 and 22, and I don’t recall a generation that is more committed to improving this country than the current generation of young people, and I’m also optimistic that, in an ironic way, the Trump administration has ignited the most basic issue of all, and that is, “Are we connected to one another, and if so, how?”

Melissa Parker (Smashing Interviews Magazine): Is it true that many people vote against their own economic interests?

Robert Reich: Well, a lot of people do seem to vote against their own economic interests either because they don’t know that the policies being advanced by a candidate will hurt them or else they are blinded by other things. A candidate might appeal to their racism or their xenophobia or even their religious or moral views rather than economic views and therefore make it harder for them to see their economic interests.

Melissa Parker (Smashing Interviews Magazine): You’ve said that the Trump economy was doomed from the start. What works and what doesn’t work in building an economy?

Robert Reich: You’ve got to build the economy from the bottom up. The economy really is about people, and it’s about their productivity, their education, their health, their capacity to work together, the physical transportation and communicational links on which they rely. Investing in those fundamentals improves the economy overall. That’s the way historically we have grown our economy, and that’s the way also we have grown together. That is, the growth doesn’t just benefit a handful at the top, but it benefits the vast majority. That’s what we’re failing to do.

Trickle down economics, that is, the assumption that you give big rewards to those at the top and somehow those rewards will trickle down to everyone else, has never worked. It didn’t work under Ronald Reagan. It didn’t work under George W. Bush. Nothing trickled down. For the past 40 years, the median wage in the United States has been relatively stagnant adjusted for inflation.

Robert Reich: That’s right. Trump’s economy is all about trickle down economics. It’s trickle down economics on steroids because it’s giving the top 1% and big corporations huge tax breaks, and at the same time, dramatically slashes environmental, health and safety regulations and is now attacking Medicare, Medicaid and Food Stamps on which many Americans rely.

Melissa Parker (Smashing Interviews Magazine): What do you think about Trump’s tariff proposals? In a tweet, he said, “When we are down $100 billion with a certain country and they get cute, don’t trade anymore-we win big. It’s easy!”

Robert Reich: It’s a very dangerous position. It was a position taken by Congressmen Smoot and Holley in 1930, and it contributed to the Great Depression. Trade wars are lose-lose propositions. Trump’s easy-to-win remedy of ending trade with countries with trade deficits with the United States cannot possibly result in a big win for us because American consumers would end up paying far more.

Someone should also remind Mr. Trump that trade deficits are not necessarily bad even if foreigners end up holding lots of dollars since we are the ones who created the dollars in the first place. China does raise a special set of problems, but those problems won’t be rectified by starting a trade war with China because so much of our exports, especially agricultural products, depend on exports to China.

Melissa Parker (Smashing Interviews Magazine): How do you feel about the Mueller investigation?

Robert Reich: It appears that Mueller is getting closer to finding that certain Trump aides did work closely with Russia during the 2016 election and that collusion clearly helped Trump win the election. I’m not going to predict whether that will result in Trump losing the 2020 election or a new Congress after 2018 will impeach him. We just simply can’t know that.

Melissa Parker (Smashing Interviews Magazine): Do you have a candidate in mind to run in the 2020 presidential election?

Robert Reich: There are a number of Democrats who could do well. I don’t think any Democrat has yet emerged from the pack, but there’s plenty of time.

Robert Reich: Much damage has already been done. The divisiveness, the lies, the contempt for our democratic institutions such as courts and the legislative process and the media, the divisive rhetoric about Muslims, black athletes, white supremacists, Mexican-Americans, all of this has done a great deal of harm to the country, and it may take considerable time to heal. It could be a generation or more.

In terms of our place in the world, we’re also going to have to rebuild. Most of the rest of the world sees America under Trump as irresponsible and as no longer a world leader. Getting out of the Paris accord, being isolationist and speaking to foreign leaders in disparaging ways, all of that contributes to a picture of an America that doesn’t care about the rest of the world. So it will be many years. I fear it will be many years to get back to where we are.

« Louis Gossett Jr. Interview: "I’m Not an African-American Anymore; I’m an American-African"
David Corn Interview: "Republicans Are Neglecting Their Solemn Duty to Protect the Constitution and Serve the American Public" »