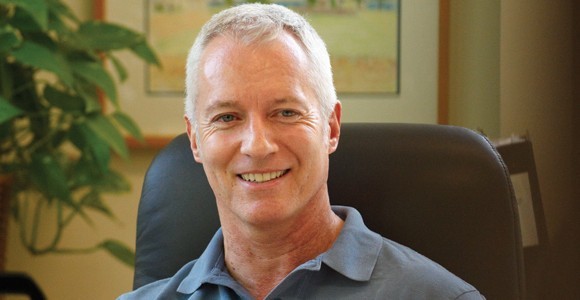 The long-running NBC daytime drama Days of Our Lives has aired nearly every weekday since November 8, 1965. The series that focuses on its core families, the Hortons and the Bradys, has been syndicated to many countries around the world and also rebroadcast on SOAPnet.

Days of Our Lives 45 Years: A Celebration in Photos by Greg Meng and Eddie Campbell is being released on November 8, 2010, to coincide with the daytime drama’s 45th anniversary. This hard cover, full color coffee table book will escort readers on a journey starting with the first cup of coffee in the morning through the production day, including hair and makeup routines, wardrobe fittings, and taping of an episode, all until the director says, “It’s a wrap!”

"Well, I plowed through many boxes and found the usual stuff that people have seen in the past and really represented the show well, but I tried to show some photos of old tables, old cameras, cue cards, and old telephones."

Original pages from scripts, archived photos, and some of the earliest set designs are combined in the book with contemporary elements to vividly demonstrate how Days of Our Lives maintains its excitement and popularity, always moving forward with the times.

The November release of Days of Our Lives 45 Years: A Celebration of Photos will not only mark an extraordinary anniversary in television history, it will also accompany the introduction of A Secret in Salem, the first in the Salem’s Secrets, Scandals, and Lies fiction line of romantic novels, by former Days head writer Sheri Anderson. 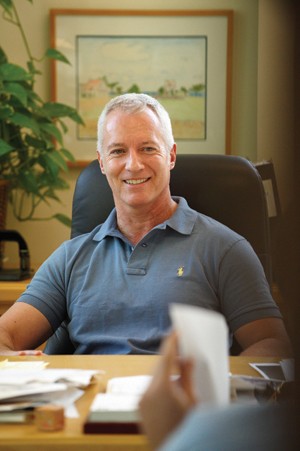 Melissa Parker (Smashing Interviews Magazine): Greg, thanks for speaking with me.

Greg Meng: My pleasure. Where are you from?

Greg Meng: I’m from Oklahoma. I’ve been out here 20 years, but I detected a bit of an accent. That’s cool. When I go home and visit you can cut it with a knife, but after I’m out here a while it kind of goes away.

Melissa Parker (Smashing Interviews Magazine): I know what you mean. Greg, what gave you the idea to write a book consisting of photos of old sets and copies of scripts?

Greg Meng: Well, actually about a year and a half ago we were working on this book deal for Sourcebooks, which was an unprecedented book project for a combination of books. It was Ken Corday’s book, a series of romance novels, and then I wanted to do a photo book.

Since we’re coming up on the show’s 45th anniversary, I thought, “Gosh, for 45 years we’ve been in people’s living rooms. What if we showed them our house, our world, where we create the show that goes into their living rooms?” I thought it would be intriguing to break the 4th wall, but without sacrificing the integrity of the show, just showing more about how this was put together. That’s how it started.

Melissa Parker (Smashing Interviews Magazine): How long did it take to compile everything for the book?

Greg Meng: Well, this is the funny thing. I’ve had people tell me this book would normally take a year or more to put together. When the publisher decided it was a great idea, they were thinking of putting together just an old archive book with a bunch of old photos. I feel like we’ve reinvented ourselves at Days of Our Lives. We’ve reinvented the way financially and production wise for half the money we used to produce it for and we still deliver the best quality, if not even a better quality show. So instead of doing that archival photo thing I wanted to show what goes on behind the scenes.

I wanted also to do a new shoot to show what we are today and incorporate the behind the scenes stuff. The funny thing is we had literally three months to put this thing together. I brought in a photographer, Brian Lipchik, for the new stuff so it took a little more than three months of literally 24/7.

I brought in Eddie Campbell and made him my co-author. We storyboarded all the material. We literally laid out the flow so it tells a story. It’s not just arbitrary photos here and there. It tells a story and we have Kristian Alfonso (Hope on Days of Our Lives) to subtlety walk us through. The section begins with her opening the door of her dressing room and then subtlety we have her taking us through to the very end of the “production day” to the final photo when she’s on stage alone. We wanted to lay it in a very contemporary format like some single photos over a two-page spread. Eddie and I worked that out together.

Melissa Parker (Smashing Interviews Magaizne): I loved the behind the scenes photos and the old sets. Many things seemed so familiar to me because I watched the show back when it was only 30 minutes and was followed by the serial The Doctors. It brought back many memories.

Melissa Parker (Smashing Interviews Magazine): I’m sure people who have been watching the show for many years as well as newer viewers will enjoy the book.

Greg Meng: Well, I plowed through many boxes and found the usual stuff that people have seen in the past and really represented the show well, but I tried to show some photos of old tables, old cameras, cue cards, and old telephones.

Melissa Parker (Smashing Interviews Magazine): How long have you been at Days of Our Lives, Greg?

Greg Meng: It has been 20 years already. I can’t believe it.

Melissa Parker (Smashing Interviews Magazine): You are in charge of production? 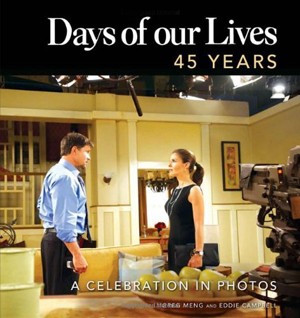 Melissa Parker (Smashing Interviews Magazine): I read that just recently fans sent about 4,000 Pink Snowballs to NBC Studios. Did you get one?

Greg Meng: Oh, we have another box over in this corner (laughs). We’re on the treadmill. It was a lot of fun.

Melissa Parker (Smashing Interviews Magazine): The fans were trying to show their support of the Bo and Carly pairing.

Greg Meng: That’s what I heard, yes. It’s always fun when people react whether it’s the way it’s going to go or just when people respond and we just know that they really care.

Melissa Parker (Smashing Interviews Magazine): Do fans normally react to “crazy” storylines such as Marlena being possessed by the devil?

Greg Meng: Yes they do react and when they react you know it’s the tip of an iceberg because most people don’t have the time or take the time to do it, especially when things are going well or they like things. You usually hear more when things are kind of, as you say, “crazy.”

There was certainly a big reaction over Marlena’s possession and that was probably one of the biggest reactions. It affects people’s beliefs and it affected people a little more sensitively than whether it’s just a romantic situation or whatever. There was not many positive reactions, but the ratings showed many people tuned in to watch, so it’s an interesting double edged sword.

Melissa Parker (Smashing Interviews Magazine): I’m sure it was tough to lose Frances Reid. She was probably everyone’s “granny.”

Greg Meng: She was. It was actually a big loss. We had a lovely memorial here at NBC. I put together a piece and at the end we used the song, “Never Say Goodbye (Just Goodnight).”

Melissa Parker (Smashing Interviews Magazine): Days of Our Lives will be switching to high definition soon.

Greg Meng: Yes, we’ve already started taping the shows in high def. It’s looking really great and much better than we expected. Some of the actors who were very concerned are like, “Wow, I look great!” It officially starts on the anniversary show, which is Monday, November 8.

Melissa Parker (Smashing Interviews Magazine): Does the show’s contract run through next year?

Greg Meng: It goes to September of 2011, but stay tuned because we’ve got big plans beyond that. That’s all I can say.

Melissa Parker (Smashing Interviews Magazine): Greg, what are your personal feelings about the future of soaps?

Greg Meng: I think it’s very sad that we’re down to six shows. I do think there’s a future, but that’s what we’re in the middle of creating. Many people didn’t think we would be around even at this point. Some people are concerned because they say, “Well, ABC has multiple shows, CBS had multiple shows, and Days of Our Lives is out there on their own.”

We have nothing but support from the network and in some instances it may even be better for us because we feel their support and are very valuable to them. We’re their longest running scripted show. We’ve shown we can reinvent and produce the show for half of what we used to produce it for.

Creatively we have Gary Tomlin and Dena Higley (head writer) moving into new areas. We’re showing even subtle things like the Maggie/Melanie relationship, the older/younger generation mentor/friend relationship. So yes, I think we’ll be around for a long time. The responsibility is on us, though, to keep staying current, honest, and relatable.

Melissa Parker (Smashing Interviews Magazine): Can you give me some background information on the book A Secret in Salem? I believe that’s the first in a series.

Greg Meng: Yes it is. Initially it’s a series of three and we’ll see how it goes. We brought in Sheri Anderson who is a former head writer of Days and who helped to create some very important characters on the show.

She has lived, breathed, and still continues to live and breathe the show so she knows the heart and soul of where the characters came from and where they’re going. We thought, “Well, many characters come and go from a show but they’re still alive somewhere so let’s create another world for them to show where they are and their relationships with the characters currently visible in Salem.”

Melissa Parker (Smashing Interviews Magazine): Even though there’s probably no chance of ever bringing back John and Marlena?

Greg Meng: Well, let me ask you. Would you like to see John and Marlena return?

Melissa Parker (Smashing Interviews Magazine): Absolutely. They are one of my favorite pairings of all time.

Greg Meng: Many things happened for financial reasons. You can only have a certain amount of people to tell a story at one time.

I’m going to tell you a secret. I’m in the works of … I had lunch with Deidre a couple of weeks ago. She has a new book out now at Amazon.

Between you and me, she’s the most visible across all different strata of actors on the show. I said, “You know what? Let’s help each other promote this. We’re all still family. Marlena still lives. She’s just not in Salem right now, but she’s a part of this Secrets of Salem book and certainly a part of the coffee table book.” So I think she’s going to be with me to open the coffee table book in New York at Barnes & Noble.

That’s all I can say right now. She’s not on the show at this time, but you never know. It is good to hear if people would like certain people to come back.

« Will Sasso Interview: Star of the Hit CBS Comedy '$#*! My Dad Says'
Claudia Wells Interview: 'Back to the Future' Celebrates 25th Anniversary »