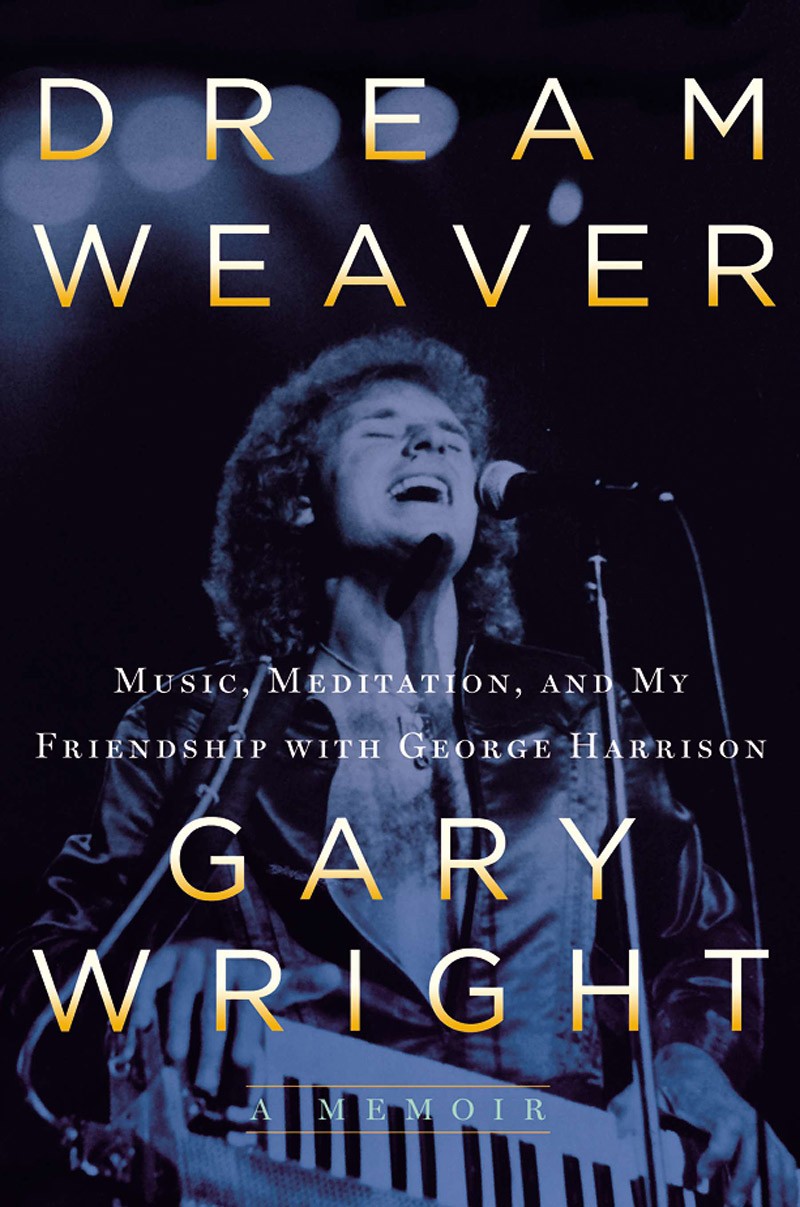 Songwriter, performer and musical pioneer Gary Wright, world renowned for his classic hits “Dream Weaver,” “Love is Alive” and “Really Wanna Know You,” and for his role in helping to establish the synthesizer as a leading instrument in rock and pop, publishes his autobiography, Dream Weaver: Music, Meditation, and My Friendship with George Harrison, on October 2, 2014.

Dream Weaver is ultimately a story of a spiritual journey and Gary’s lifelong friendship with George Harrison. At thirty-three, Wright was at the highest point in his career. His album, The Dream Weaver, had been on top of the charts for months with two hit singles, was touring with Peter Frampton and recording with Eric Clapton, B.B. King and George Harrison – who would later become one of his best friends.

"I got a phone call in the studio from Klaus Voormann who was very close to all the Beatles. He was from Hamburg, Germany and knew them when they played at the Star-Club. Klaus had played on my first solo album that I’d done after I left Spooky Tooth, so I get this call one day. I was in the studio producing an artist, and he said, 'I’m in the studio with Phil Spector and George Harrison, and they need another keyboard player. Can you come right over?' I said, 'I’ll be right there!’"

In his book, Wright details how he formed to legendary rock group Spooky Tooth and how his close friendship with Harrison began and developed over the years as they wrote songs together, pondered philosophical issues and journeyed to India. Dream Weaver includes many never before seen photographs of the two as well as detailing Wright’s early childhood, his living in Germany while studying psychology and the reemergence of his own career.

Melissa Parker (Smashing Interviews Magazine): Gary, why write your story at this time in your life?

Gary Wright: I felt that I had done so many albums over the course of my career and toured and all that. I had done several albums, and I wanted to have a little bit of a change. My friends over the years had asked, “Why don’t you write a book? You’ve done so many interesting things and worked with so many great people.” I kept saying, “Yeah. Yeah. One day I will.” Then all of a sudden, this urge came over me that I should do this, but I wanted to write it by myself.

I wrote up a proposal, got a literary agent involved, he shopped it around and sure enough, I landed a publishing deal with Penguin Random House. They were interested in putting it out, so I thought, “Wow! This is great!” These are subjects that are dear to my heart, music, yoga, spiritual matters and my friendship with George Harrison. It was a labor of love (laughs).

Gary Wright: Oh yeah, very much so. My boys are a little bit older than Dhani, but they used to play with him out at the big house in London in the English countryside.

Gary Wright: I got a phone call in the studio from Klaus Voormann who was very close to all the Beatles. He was from Hamburg, Germany and knew them when they played at the Star-Club. Klaus had played on my first solo album that I’d done after I left Spooky Tooth, so I get this call one day. I was in the studio producing an artist, and he said, “I’m in the studio with Phil Spector and George Harrison, and they need another keyboard player. Can you come right over?" I said, “I’ll be right there!”

I jumped in my car and drove over, walked in the studio and was totally humbled by the presences of Billy Preston, Ringo, Eric Clapton and just a whole bunch of incredible musicians and George who, of course, was very gracious. He welcomed me to the session, and he was just a totally wonderful human being. I could tell that right from the very beginning.

Melissa Parker (Smashing Interviews Magazine): Were you and George both interested in Indian religion?

Gary Wright: Yeah. It was yoga philosophy. We were both into really the yoga part of it, which is kind of the meditation part and going deep within using mantras and stuff like that. George saw that I was interested in what he was doing, and he took me under his wing as my mentor and gave me books to read. I was thrilled because it was something I had always really intuitively known was true, but I never read anything about it. George was the vehicle that actually introduced me to that.

Melissa Parker (Smashing Interviews Magazine): The idea for the song “Dream Weaver” came from one of those books George gave you?

Gary Wright: Yes it did. It was actually a poem in one of the books called Songs of the Soul that was written by Paramahansa Yogananda who was the author of a book called Autobiography of a Yogi. It’s a spiritual classic, and George gave me that book. He gave everybody he knew that book including President Ford when he went to the White House. He was an “ambassador of truth” in that sense. That’s where we were aligned.

George was really my mentor. I really dove in and took it very seriously and started to meditate a lot. Our friendship endured over all the years. Sometimes we’d meditate together, we’d write songs together, and we’d take vacations together. It was quite a unique experience.

Melissa Parker (Smashing Interviews Magazine): George turned out to be one of your closest friends.

Gary Wright: Yeah. He was definitely one of my best friends … a special friend.

Melissa Parker (Smashing Interviews Magazine): You mentioned the band Spooky Tooth. Have there been any recent reunions?

Gary Wright: There was a reunion about seven or eight years ago, just a very short little tour we did of Germany and Switzerland.

Melissa Parker (Smashing Interviews Magazine): You were in England when the band was formed?

Gary Wright: Yes, I was brought over by Chris Blackwell who started Island Records. He liked my voice and had seen me perform at a Traffic concert in Oslo, Norway in late ’67. Chris asked me to come back to London, and I came back with the band I was in, and we recorded a song called “Sunshine Help Me.” The session didn’t go very well because the rest of the band members were not really that great in the studio. Sometimes what you can get away with musically in live performances doesn’t carry over to a studio environment. The band was very nervous and continually made mistakes.

The next day I met with Chris, and he had another band signed to his label called Art. Their singer was Mike Harrison, and we became a band with two lead vocalists and each also played keyboards. The other members were Greg Ridley on bass, Luther Grosvenor on guitar and Mike Kellie on drums. It really worked, I came up with the name Spooky Tooth, and the band thrived. It was quite well respected; we did a lot of shows and had a certain degree of success.

Gary Wright: No. Wonderwheel was during two incarnations of Spooky Tooth. There was the original Spooky Tooth that did the album It’s All About and then Spooky Two which is the biggest one and then another album that was released under Spooky Tooth’s name but really wasn’t us called Ceremony. Then I left the band. I did my two solo albums, Extraction and Footprint, and went on to form Wonderwheel. That’s when George played on a few tracks, and Mick Jones was the guitarist.

Melissa Parker (Smashing Interviews Magazine): When you went solo, you got away from the hard rock of Spooky Tooth into a more softer sound.

Gary Wright: On my first album, Extraction, there were a few tracks that were kind of hard rock with Alan White on drums, Trevor Burton on bass, me on organ, Mick Abrahams as one of the guitar players and Hugh McCracken as well on guitar. But I was kind of moving away from that to my roots, which are really R&B. My two biggest influences locally were Ray Charles and James Brown, so I think I was gravitating more toward that rather than staying with the hard rock.

Melissa Parker (Smashing Interviews Magazine): In the book, you talk about being a child actor. Was that your first interest before music?

Gary Wright: No. Actually my mother arranged for that whole thing to happen. I originally came into the play as an understudy to the main role, and then I picked up the main child role. I was only eleven and twelve during those years. It was an amazing experience to act and sing every night before sold out audiences and sing with a full orchestral band.

I sang a duet with Florence Henderson. I was on The Ed Sullivan Show. I did have a certain degree of fame back at that time. I think singing before an orchestra was an inspiring experience for me. It was a great time. I enjoyed it, but then I didn’t want to be a Broadway actor. I left the show after a year and a half or two years. I left it and went on to be a normal kind of person in school, playing sports and little league baseball and that kind of thing.

Melissa Parker (Smashing Interviews Magazine): You also had aspirations of becoming a doctor?

Gary Wright: I did. I was in medical school, and I didn’t do well there. It was so hard. I wanted to stay in school and study psychology and live in Europe because I always loved Europe. I had made a trip there in the mid 60s, and I spoke German, so I went over there. Berlin was quite a fascinating place. This was right in the middle of the Cold War. It was a year or so after that they put up the wall, so that was very interesting to me.

After about a year, I got tired of it and realized I didn’t really want to become a psychologist, so I took a break from my studies to pursue something I’d always loved, and that was music. I had been in bands when I was in high school and college and always loved doing that. I put a band together then, and we toured around. As I mentioned to you, we were in Oslo, Norway opening for Traffic, and that’s when Chris Blackwell asked me to come back to England. That’s where my career formally started.

Melissa Parker (Smashing Interviews Magazine): Gene Simmons recently stated, “Rock is finally dead. It was murdered.” He blames file sharing and that no one values music “enough to pay you for it.” How do you feel about that?

Gary Wright: It’s true. It’s brutal out there right now. It’s like there’s this whole kind of mindset from people with file sharing and just really ripping the artist off. It’s no different than if you went outside and worked all day in the hot sun digging ditches, and somebody at the end said, “Well, you know, everybody does that. We don’t pay.”

The artist goes through a lot. Why shouldn’t he be paid? I think people have this mindset that all artists are super wealthy people, and they don’t need the money. It’s not true.

Gary Wright: I’ll be touring supporting the book through this year and next year, but who knows? I might do another album.

« Joe Mantegna Interview: "'Criminal Minds' Is Not Some Pretend, Made-Up Kind of Program … What We Show Is Not Fantasy"
Ginger Alden Interview: Elvis Presley’s Fiancee and Last Love Details Final Months of His Life in Memoir, "Elvis & Ginger" »