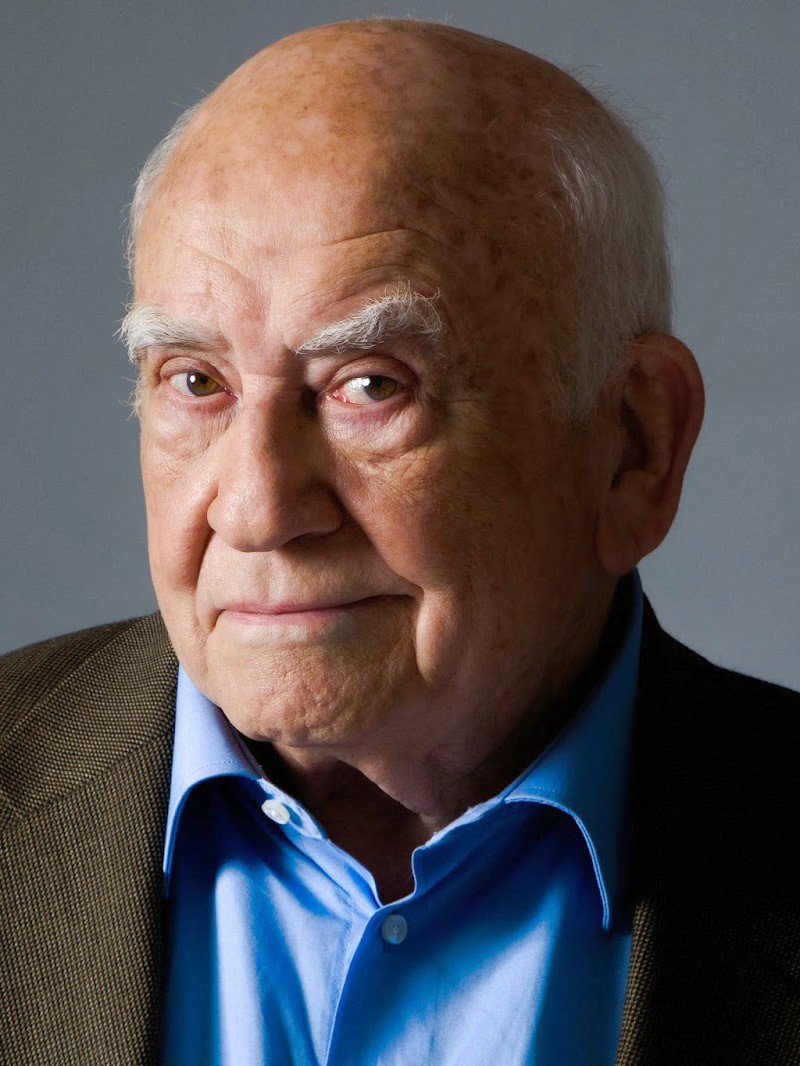 Ed Asner is an actor, voice actor, activist and a former president of the Screen Actors Guild best known as gruff-but-lovable Lou Grant on both The Mary Tyler Moore Show and its spinoff series Lou Grant, making him one of the few TV actors to portray the same leading character in both a comedy and a drama.

"We’ve got to find that moderate liberal who can calmly show basically just how easy it really is if you just shut up and listen."

Using humor, and written with his friend Ed Weinberger, Asner reclaims the Constitution from the right-wingers who think that only they know how to interpret it in The Grouchy Historian: An Angry Old-Time Lefty Defends Our Constitution Against Right-Wing Hypocrites and Nutjobs, released October 10, 2017, by Simon & Schuster.

Melissa Parker (Smashing Interviews Magazine): Ed, thanks for taking the time to speak with me today.

Ed Asner: Well, with such a lovely voice, why wouldn’t I?

Melissa Parker (Smashing Interviews Magazine): You are still such a charmer (laughs). What inspired you to write The Grouchy Historian?

Ed Asner: I was in a bull session with Ed Weinerger, a friend, former producer of The Mary Tyler Moore Show and writer for the one-man show I do. We were shooting the breeze and complaining about the rigid constructionists, and we thought we ought to write a book with our capacity for humor and repudiate that idea of authenticity.

Melissa Parker (Smashing Interviews Magazine): By talking about the founders of the Constitution?

Ed Asner: Yeah. We examine the body of the men, their makeup and their economic interests. They were all interested in making money. A large number of them did not even stay for most of the creation of the Constitution, like 55 to 59 stayed. We talk about the comments each had for the other and the fact that the well-trained militia is one thing, a standing army is another and about the idea of it being a God-given right to hold and keep arms.

Melissa Parker (Smashing Interviews Magazine): You discuss the bastardization of the Second Amendment?

Ed Asner: The originalists delved into that area, but we thought we’d take a cheap shot on our own. How many times do we have to hear about multiple gun murders in this country? But nothing ever changes. That’s what this book is about.

Melissa Parker (Smashing Interviews Magazine): Do you believe that the First Amendment is in jeopardy with the current Trump administration?

Ed Asner: Trump acts like an originalist the way he discriminates between the truth he believes and what the newspapers print. What he believes are altered facts. But it all depends on who’s governing the press at the time. Right now I think our press is very free particularly in voicing out against the current president. But I know at the time of the Iraqi invasion, I found the press horribly deficient as I found the press horribly deficient in questioning 9/11.

Melissa Parker (Smashing Interviews Magazine): Do you feel the press holds any responsibility for Trump getting elected because of the tremendous coverage he was given during the campaign?

Ed Asner: I think the press holds blame because of their previous lapses. You’ve got a lot of angry people. You can see that by the way they voted, and I can’t say they were misinformed. These people wanted to smear feces on the Capitol, and we’re not recognizing what the source of the anger is.

I mean, how is it possible that all three branches of our government are sustained and maintained by a Republican majority? How can we have such an unquestioning setup as we have now? What empowered them? Is it simply because a black man was president for eight years, and they wanted to pay us back for that? I’m staggered at the thought.

Melissa Parker (Smashing Interviews Magazine): The title of your book is The Grouchy Historian: An Angry Old-Time Lefty Defends Our Constitution Against Right-Wing Hypocrites and Nutjobs. Do you feel that Democrats and liberals have a better grasp of understanding the Constitution than the “right-wing nutjobs”?

Ed Asner: I would not necessarily say that, no. I would say that liberals have been deficient in the fact that they have had poor leadership. Look at the response Bernie Sanders got. He’s not even regarded as a Democrat. He’s regarded as a Socialist. It was wonderful, the reception he got throughout the country and the effect he had on people. Unfortunately, it has reached a dead-end now and he’s going to be too old to run the next time.

I can only hope we can make up for the poor leadership on the left by Al Gore when he was running, followed by John Kerry’s disappointing leadership, so that a leader like Bernie Sanders can rise and show them all up in terms of making sense when he opens his mouth. I’m worried that if Pence is the candidate in the next election, we’re not going to have the squeaking organs to ignite the fires of liberalism and to lead the way. We’re going to need a Bernie Sanders and I don’t see him in the wings.

Melissa Parker (Smashing Interviews Magazine): Who do you see in the wings?

Ed Asner: Elizabeth Warren is certainly a good speaker, but I’m afraid, from what I’ve read, that she’s far too good at pissing people off, so she loses. We’ve got to find that moderate liberal who can calmly show basically just how easy it really is if you just shut up and listen.

Melissa Parker (Smashing Interviews Magazine): I remember an episode of The Mary Tyler Moore Show where Mary went to jail rather than reveal her source as a journalist. Those TV shows you were involved in 40 and 50 years ago had messages then that are very relevant today.

Ed Asner: Oh, yeah! The first series I ever signed onto was Slattery’s People. I was the Capitol Hill reporter in that. But I was not busy at all, so I asked out of my contract, and they said, “Fine. As long as you agree to come back and do the character when we need you.” They had a script which would strongly feature me, and I would’ve done it for nothing because it was such a worthwhile piece of work, so I came back and did that show. Leo Penn, Sean Penn’s father, directed it. It turned into a very good show.

Melissa Parker (Smashing Interviews Magazine): What was Hollywood like when you began working there as an actor about 1960?

Ed Asner: I came out of New York after six years there. There had been an earlier migration by New York actors that preceded me. I was in the second turning and I loved it. I just loved it. Big studios back then. There was order, not chaos. The money was certainly reasonable. My big fight, in terms of my Mary Tyler Moore years, was trying to get the residuals check, not the initial payment, and finally I succeeded. I got paid, but it was bupkes. It was nothing. Here you’ll do 24 shows a year, and that meant at least 12 shows would be played in primetime or what is considered primetime season. You’d be getting nothing for its reruns, but people were seeing them for the first time. So it was hard to fight, but we won. The union came through.

I find a great deal of chaos in La La Land these days just in the general making of movies. Working actors are being unpaid. If we could find some way to restore order and clean up the confusion of outlets that are out there that pay no money, that get you nowhere, if we could clean that mess up, it would be a wonderful victory.

The quality of the work was very good back then. I came out here after doing my second Naked City. If you go back and look, you’ll see the scripts and the performances rendered in Naked City in those days were vastly superior to much of what you see now.

Melissa Parker (Smashing Interviews Magazine): You made a film in 1965 called The Slender Thread, starring Sidney Poitier, Anne Bancroft, Telly Savales and directed by Sydney Pollack. You had been on numerous TV shows for several years, so as a fairly inexperienced movie actor at that time, did you learn the ropes from your co-stars?

Ed Asner: Well, I didn’t know Sydney Pollack at the time, but I certainly became impressed with him by his directorship. Not only was he a good director, but he was a wonderful actor as he performed in Tootsie. Sydney was wonderful in that and he was always a wonderful director. He had taste.

Now, where were we? Oh, yeah, the conditions back then. I think you’ve got a lot of crappy … everything is done on the cheap now. It’s hard to get a movie made. It’s hard to find the stars to be in a movie. There really are not a lot of headliners out there and if there are, they’re way too young, I guess, and I don’t know them.

Melissa Parker (Smashing Interviews Magazine): Did you always favor comedy over the more dramatic roles throughout your career?

Ed Asner: I loved doing comedy on stage and I was good at it, but I always had difficulty finding the “What did I do the first night?” that got the laughs that I couldn’t get the second night. That was always bugging me and dragging me down. Then getting Mary and doing comedy on a regular basis, I found out that relaxation certainly helps, knowing what you’re doing certainly helps, taking careful note of what you did so that you can do it again helps and above all having great writers certainly helps.

Melissa Parker (Smashing Interviews Magazine): Will there ever be such a special talent as the late Mary Tyler Moore?

Ed Asner: No. I would find that hard to recognize. She was one-of-a-kind. She surely was.

Melissa Parker (Smashing Interviews Magazine): What else is going on, Ed?

Ed Asner: The only thing I really have that stamped in cement are a bunch of performances of my one-man show with Weinberger. It’s called A Man and His Prostate. I call it the male response to The Vagina Monologues.

Ed Asner: You have to give me a few days to think about that (laughs). (pausing) It’s hard to find what you’re looking for.

Ed Asner: I’m fine. I have my problems, of course, Who doesn’t at soon to be 88? But I’m the last in the family. I had two sisters die, my brother died in March of this year and an older brother died some years earlier. So I’ve got to keep up the family achievement.