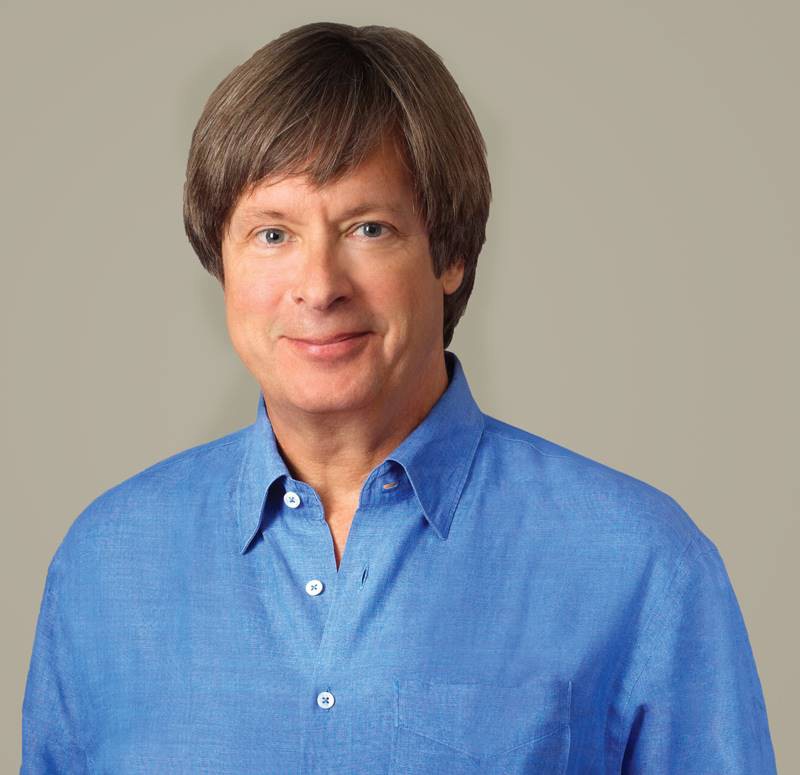 Dave Barry is an author and columnist who wrote a nationally syndicated column for the Miami Herald from 1983 to 2005 and won the 1988 Pulitzer Prize for commentary. He has written numerous books of humor and parody including Dave Barry’s Complete Guide to Guys, Dave Barry Turns Forty and Dave Barry is Not Making This Up.

In Barry’s latest book, Lessons From Lucy: The Simple Joys of an Old, Happy Dog, the bestselling author shows how to age gracefully, taking cues from his beloved and highly intelligent dog Lucy.

Dave Barry: They love you. It’s nice to be loved especially when you do a job like mine where sometimes people really don’t like you (laughs). Lucy doesn’t care what I’ve written, and she doesn’t care what I think or what I’ve said. She just loves me. Unconditional love is probably the best part of it.

Melissa Parker (Smashing Interviews Magazine): Why did you write Lessons from Lucy?

Dave Barry: I turned 70, and Lucy turned 10. If you go by dog years, we’re the same age, and I realized she was much happier than I was. The things that she’s done, she’s always done. When Lucy was a puppy, she liked to play. She’s an old lady now and sleeps more, but she still likes to play. When she was a puppy, she loved people and loved making friends, and she still does. I kind of stopped having as much fun and stopped making friends as easily. So the idea was, “What is Lucy doing that I could do that would make me happier aside from drinking from the toilet, which is where I draw the line?”

Melissa Parker (Smashing Interviews Magazine): Which of the seven lessons from Lucy do you feel you’ve had the most success at accomplishing?

Dave Barry: I’m doing better with having fun again. I’m deliberately doing things that are really pretty stupid. I’m in a rock band of authors called the Rock Bottom Remainders. Stephen King’s in it, also Amy Tan, Scott Turow, Mitch Albom. We’re a terrible band, and yet it’s really fun. If I were being a serious human being, I would not get up on the stage and sing “Louie Louie,” with competent authors as my sidekicks. But I’m doing it because it’s fun and because I enjoy it.

I’m also doing better on trying to reconnect with old friends. I wasn’t even sure my old friends were still alive. I’ve made a point now to write down a name and sometimes to call that person, which I did not do very often for a long time.

Dave Barry: I did. I did for her and me. Turns out I’m half Dalmatian. It turns out Lucy is a half Boxer, a quarter Dalmatian, a quarter Chow Chow and a quarter Retriever. She’s pretty random.

Dave Barry: I don’t know that cats would want us to know their secrets, you know? (laughs).

Melissa Parker (Smashing Interviews Magazine): I’ve learned nothing from my cat except how to be totally fine by myself (laughs).

Dave Barry: Exactly (laughs). The main lesson is to go away for about three weeks, and you’ll never know what’s been going on (laughs).

Dave Barry: You’re still a young lady. Enjoy your 60s. That’s all I have to say.

Dave Barry: I think I’ve gotten better at figuring out what matters in life, which is about time. The book ends with kind of a weird thing. I had finished the book last summer, and it was going to be published in October of 2018. My daughter, Sophie, was 18 and getting ready to go off to Duke University. Two days before we were supposed to take her to Duke, she woke up paralyzed. She came down with an autoimmune disorder called transverse myelitis. It was terrifying because they don’t really know what to do about it. Above all, they didn’t know what was going to happen. A third of the time, you don’t even get better, a third of the time you get a little better, and a third of the time you recover all the way.

So we went through a pretty horrifying few weeks. She spent 40 days in the hospital. She got through it, and she got better. She’s now at Duke University. But it was sort of built on a bunch of lessons I put in the book, and it comes down to one more important one which is that you have to figure out what really matters in life. It’s almost none of the things that you spend your day worrying about.

In our case, all we cared about was if Sophie was going to walk again. We didn’t care who the president was or what he said or didn’t say. We didn’t care what was in the news or what the stock market did. We just didn’t care about anything but that because when we thought about it, that was the only thing that really mattered to us. So the last chapter of the book deals with that. In the end, what I got from that is gratitude. Even though a horrible thing happened in our family, we had gratitude for what we do have. If you can get up in the morning, that’s something to be really grateful for because if you can’t do it, it’s awful. Anyway, I would say that’s the biggest change for me.

(barking sounds) I don’t know if you can hear her, but Lucy is out there very angry at the yard man (laughs). How dare he come and clean our yard? Lucy’s looking at me like, “Are you going to let him just do that?” (laughs) Anyway, I learned essentially what’s really important in life and what isn’t. If you look at Twitter or the Internet in general, the things people are just getting so frantically upset about all the time are so trivial when you think about what really matters in life. That’s probably the biggest change for me.

Not that I do this all the time, but I’ll still get really pissed off if the person in front of me in the line for frozen yogurt wants free samples (laughs). But I’m a little quicker now to go, “Why am I worried about that? Why do I care about that? It doesn’t matter.”

Dave Barry: She’s up at Duke now. That makes me happy every day in a way very few things do.

Melissa Parker (Smashing Interviews Magazine): Your dad was a Presbyterian minister, and you’re an atheist?

Dave Barry: Yeah. I really have been for most of my life. My dad and I had many discussions, and he was always very good about it. He wasn’t a dogmatic person.

Melissa Parker (Smashing Interviews Magazine): Your brother was also a minister, so why did you become an atheist?

Dave Barry: For a while, my brother was a Presbyterian minister as well, and he’s still a pretty religious guy. You know, I don’t know the answer to that. I’ve just never been a believer. When I was a kid, I kind of applied the same standard to religion like I did to the rest of the things I saw in the world, and I saw no evidence.

That’s me, and I’m not one of those people to go around proclaiming atheism. I certainly don’t mock religious people. My wife’s a religious person and my dad was. But for me, my world doesn’t include a supreme being, and I’m okay with it. Maybe I’m wrong, but I’m okay with it. I never went through a phase where I was a believer, and I’ve always been very, very skeptical.

Melissa Parker (Smashing Interviews Magazine): You were interested in music growing up, so why did you decide on a career in journalism?

Dave Barry: (laughs) No useful skills. If I could’ve been a musician, I would’ve loved to have done that, but I was never close to skilled enough. I was in a band in college where the other guys were really good musicians, and all of them went on to try to make it as musicians. All of them. Well, only one of them ultimately made it as a musician, the rest of them didn’t, and they were way better than I was. So that was never a possibility.

The other thing was I loved writing. I always did, and I always loved humor. As soon as I got out of college, I went to work for a newspaper, and I fell in love with newspapers. I can’t imagine falling in love with them today. The industry is so sad now, but during the 70s, 80s and 90s, it was great. It gave me an outlet to write humor, which ultimately became my career. So it worked out for me. Music? Nah. Just a sideline (laughs).

Melissa Parker (Smashing Interviews Magazine): Most of your articles are, of course, humorous, but in June of 2018, you wrote, “Sorry I’m not feeling funny today – my heart aches for slain journalists.”

Dave Barry: Oh, yeah. I wrote that so fast. I just couldn’t writing anything else until I wrote that that day. I felt so bad. That was a tough one.

Melissa Parker (Smashing Interviews Magazine): How do you feel when Donald Trump calls journalists the “enemy of the people”?

Dave Barry: Well, you know, it infuriates me, and that’s what led to that article. I didn’t want to make it about Trump. But I do think that in the past, we’ve done a better job of keeping our political bias out of our reporting especially with television journalists. Neither Fox nor MSNBS is trying to be objective. Almost all of my friends are newspaper people. I’ve known hundreds and hundreds of them. The country’s full of little papers. Most are not trying to push any agenda at all. It infuriates me that they’re getting sucked into this, “Oh, the media, the media …” when they’re not getting paid very much, and some of them are getting shot. That’s disturbing to me.

Dave Barry: Yeah. Trump should not be saying those things. He can pick a specific reporter and say he doesn’t agree, but he shouldn’t just say that the media is the enemy. That’s really not true, and as you say, it’s dangerous.

Dave Barry: I’m easily amused (laughs). But I I watch a fair amount of television. I like the Netflix series Veep. It’s a wonderful comedy and so well written. The Office was great. There’s a lot of funny stuff on television more than in newspapers partly because newspapers have gotten smaller and probably political humor these days gets drenched in anger and vitriol, and everybody gets furious with everybody else. So I like escapist humor, and television seems to be a good source for it.

Melissa Parker (Smashing Interviews Magazine): Will Lessons from Lucy be made into a film?

Dave Barry: (laughs) I know you’re familiar with how Hollywood works. I just never get my hopes up. If somebody come to me tomorrow and said, “Here’s a big check. We’re going to make this into a movie,” I would certainly take the check (laughs). But I do not expect that to happen.

« Rick Wilson Interview: "I Call Fox the Fourth Branch of Government"
Steve Lukather Interview: "As of October 20, Toto Ceases to Exist in Its Current Form" »