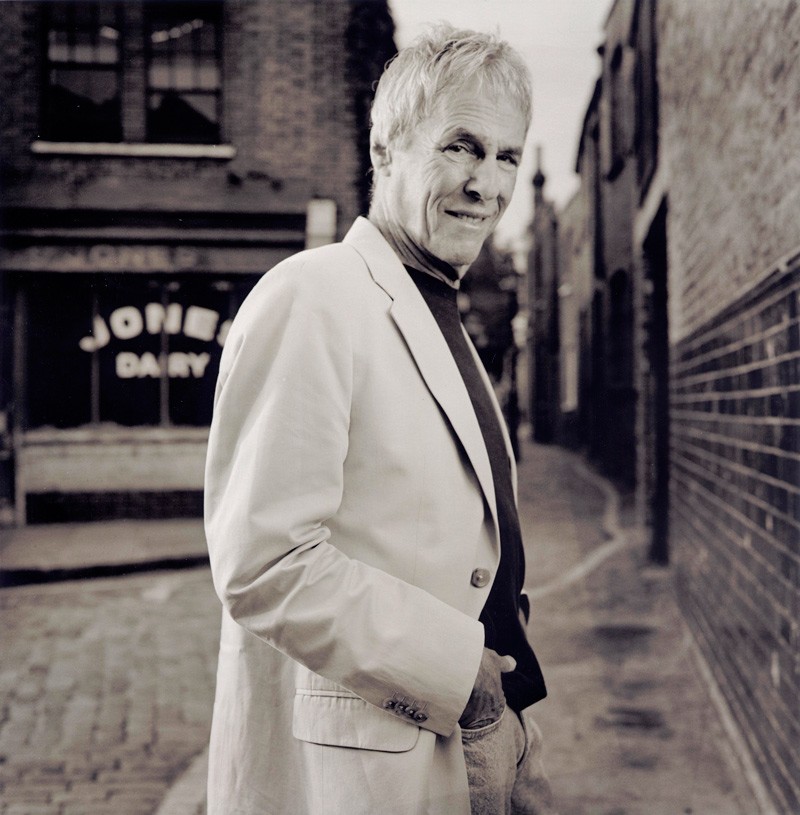 Burt Bacharach was born in Kansas City, Missouri, on May 12, 1928. This legendary figure in pop music is one of the most accomplished popular composers of the 20th century. Combining elements of jazz, pop, Brazilian music and rock, Bacharach created a whole new style that was as contemporary as it was popular.

Bacharach’s family moved to New York in 1932, and after displaying musical talent from an early age, went on to study at Montreal's McGill University, the New School for Social Research in New York and the Mannes School of Music, also in New York.

"I made a pact with myself that if I were to write it, there would be no sugar coating anything, no covering up the blemishes and pimples. Was I looking to make myself good or better to just gloss over some stuff? No. I wanted to be open and honest. Have I hurt some people? Yeah. There are some hurtful things about how Angie feels about me, but when we were married, I did the best I could in a very trying, difficult, brutal situation."

In 1957, Bacharach teamed with lyricist Hal David, and almost immediately the duo wrote two hits, “The Story of My Life” for Marty Robbins, and “Magic Moments” for Perry Como. The talented musician also toured with Marlene Dietrich from 1958-1961 acting as her musical director.

After meeting Dionne Warwick, Bacharach went on to write the singer thirty-nine chart singles, eight of which were top ten hits including “Walk on By,” “I Say a Little Prayer” and “Do You Know the Way to San Jose?” He also wrote a number of scores for the silver screen, among which were the title songs to Alfie and What’s New Pussycat? His score for Butch Cassidy and the Sundance Kid won him two Oscars for Best Score and Best Theme (for “Raindrops Keep Falling on My Head”). He also won a Grammy for the same film.

Bacharach has continued to write for various artists, and as of 2012, has written 73 Top 40 Hits in the United States and 52 Top 40 hits in the U.K. Last year, he and Hal David received the Library of Congress Gershwin Prize in honor of their lifetime achievements in popular music.

Anyone Who Had a Heart: My Life and Music was released May 7, 2013. This memoir offers a candid backstage look at show business as well as the personal struggles of this iconic artist whose songs have been recorded by some of the most influential singers of the 20th century. He steps out from behind the music to give an honest, engaging look at his life from his work with Hal David, Dionne Warwick and Elvis Costello and many others to his tumultuous marriages and the devastating fate of his beloved daughter (who committed suicide in 2007 at age 40).

Melissa Parker (Smashing Interviews Magazine): Burt, it is an honor to speak with you. Thanks for taking the time today.

Burt Bacharach: Thank you, Melissa. Sorry, I came back from Brazil with a cold and talking on the phone is a different way to project your voice.

Melissa Parker (Smashing Interviews Magazine): I understand. It is quite frustrating and uncomfortable talking on the phone with a cold. The recent news is that you’re teaming up with Elvis Costello once again for a brand new musical.

Burt Bacharach: Right. I had dinner last night with Elvis, and we talked about a projected schedule. It’s exciting.

Melissa Parker (Smashing Interviews Magazine): It was interesting to me that other people “spoke” about you in the book in addition to you telling the story.

Burt Bacharach: Robert Greenfield did some talking to different people in my life, different ex-wives and girlfriends, Dionne Warwick, Elvis Costello and others. He had direct conversations about me with the various people and then showed it to me the way it would be. I liked the idea very much. It seemed very natural, and it didn’t feel like “she said something,” and then right afterwards I’m sharing what Angie (Dickinson) just said.

It was just kind of bouncing between two voices, but it’s not a conversation either, you know? It might be that my response to what Angie just said might just be no response at all or just how I remember it, whatever it was that happened in my life in the time period I was with Angie.

Melissa Parker (Smashing Interviews Magazine): What made your collaboration with Hal David so successful?

Burt Bacharach: We came from a place of very ordinary songs initially, and then the first two hits that Hal and I had together … so grateful to have had hits, to have had one hit even. But the first ones were “The Story of My Life” and “Magic Moments,” and they were not a precursor of what was to come.

I think when Hal and I started to write our best stuff was when we actually controlled how the song material would be done in the studio, how it was going to be recorded, who made the arrangements and who would produce the record. Having control particularly with the records we made with Dionne Warwick … we’d make those songs for her. The more I saw what she could do vocally, the range and the emotion, the more freedom I had.

Melissa Parker (Smashing Interviews Magazine): One of my favorite songs you and Hal wrote for Dionne was “I’ll Never Fall in Love Again.” I also like Barbra Streisand’s version of “A House is Not a Home.”

Melissa Parker (Smashing Interviews Magazine): I just watched a video clip of you and Barbra singing “Close to You.”

Burt Bacharach: Wow! When I look at that, I say, “Man, I was pretty brave to have been singing harmony with her.”

Melissa Parker (Smashing Interviews Magazine): There appeared to be some flirting going on between the two of you.

Burt Bacharach: It was very natural. I was kind of falling in love with her as that was going down. I always liked Barbra. Could you say I had a bit of a crush on her? Yeah. Why not? You have this beauty singing at you, to you, and you’re playing the piano and singing harmony with her. Hello. I think it was pretty brave on my part, right? When I think about it, I couldn’t do that now, Jesus!

Melissa Parker (Smashing Interviews Magazine): Burt, at what point in your career did you personally feel successful in the music business?

Burt Bacharach: I’m looking past the Academy Awards and the Grammys. It was a very defining moment when Miles Davis said, “Hey man, that song, “Alfie,” you wrote was a pretty good song.” I said, “Jesus, if Miles Davis said it’s a good song, I must be doing okay.”

Melissa Parker (Smashing Interviews Magazine): You wrote the lyrics in 2005 for your album At This Time. What was the inspiration for the project?

Burt Bacharach: I co-wrote the lyrics with Tonio K. The inspiration was that I hated what was going on in our country with that administration with Cheney and Rumsfeld and the lies and the deceptions. Our young soldiers were getting killed and maimed in a war that should’ve never started. That was the reason I wrote that, purely political, you know?

Melissa Parker (Smashing Interviews Magazine): In the book, ex-wife Paula Stewart said that you had OCD (Obsessive Compulsive Disorder), getting up during the night to check doorknobs. Does your perfectionism stem from the OCD?

Melissa Parker (Smashing Interviews Magazine): Is there a story you felt that you could not write about in the book?

Burt Bacharach: No. I tell you, Melissa, that I made a pact with myself with this book. I was urged to do a book for a number of years, but I didn’t want to do that. I was kind of talked into it. I said to a woman I respect a lot in LA, “You can write it after I’m not here anymore. You can write about my life.” She said, “Well, it needs to be stories about you with Marlene Dietrich, traveling around the world conducting for her, you getting fired from Vic Damone. Who’s going to know that stuff?” I said, “That’s a really good point.”

I made a pact with myself that if I were to write it, there would be no sugar coating anything, no covering up the blemishes and pimples. Was I looking to make myself good or better to just gloss over some stuff? No. I wanted to be open and honest. Have I hurt some people? Yeah. There are some hurtful things about how Angie feels about me, but when we were married, I did the best I could in a very trying, difficult, brutal situation.

Melissa Parker (Smashing Interviews Magazine): I read Angie’s interview with Vanity Fair done a few years ago in which she said that she felt you two should never have been married.

Burt Bacharach: Well, the reality is we did get married. I couldn’t have lived with anybody at the time. It wasn’t Angie. It was just I wasn’t ready to live with anyone.

Melissa Parker (Smashing Interviews Magazine): Marlene Dietrich was in love with you, but you did not return her feelings.

Burt Bacharach: Oh, I loved Marlene. First of all, I didn’t believe in getting involved with somebody you worked with and were on the road with. She was very possessive of me and protective of me. Marlene just maintained that nobody should marry me … that someone would marry me over her dead body. Not that she wanted to be married to me. It wasn’t that. She just thought that I should have my space and that I should just have lots of women. She was my friend.

Melissa Parker (Smashing Interviews Magazine): Burt, how much harder would it have been for you and a songwriting partner to become successful in the digital age of music today?

Burt Bacharach: It would have been impossible today. I feel for the really good songwriter out there. Unless you’re doing Broadway music or something like that, it’s a lost world. Radio is gone. Top 40 radio is gone. There are basically no more program directors. Everybody plays the same program. It would be much tougher, and I feel for anybody who’s a really good songwriter who is trying to write good material except if it’s going to go as a centerpiece on Broadway.

Melissa Parker (Smashing Interviews Magazine): You are going to Israel this summer. Is this your first time performing there?

Burt Bacharach: I did play in Tel Aviv with Dietrich years ago. But I don’t even think about it now, Melissa. We were going to call the tour the Anyone Who Had a Heart tour. But I’m going to change the title and call it, the “You’ve Got to Be Joking” tour (laughs).

At this point in my life, we’re out there doing thirteen concerts in five different counties. Right now, I’ve got to pack some bags, move to the next city and actually put some food in my stomach. I’ve been nonstop since nine this morning and wondering why my cold isn’t any better.

Melissa Parker (Smashing Interviews Magazine): Are you planning anything special for the 85th one?

Burt Bacharach: No. It’s Mother’s Day, so I might just take my wife out to dinner, or we’ll see how I feel. Maybe I’ll just hide out somewhere or go down to the desert where nobody can find me and pretend I don’t have a birthday (laughs).

« Erika Slezak Interview: "One Life to Live" Makes a Triumphant, Risqué Return Online, and Its Mainstay Has Plenty to Say About That
Stephen Mansfield Interview: Bestselling Author Challenges "Anti-Semitic Lie" in "Killing Jesus" »