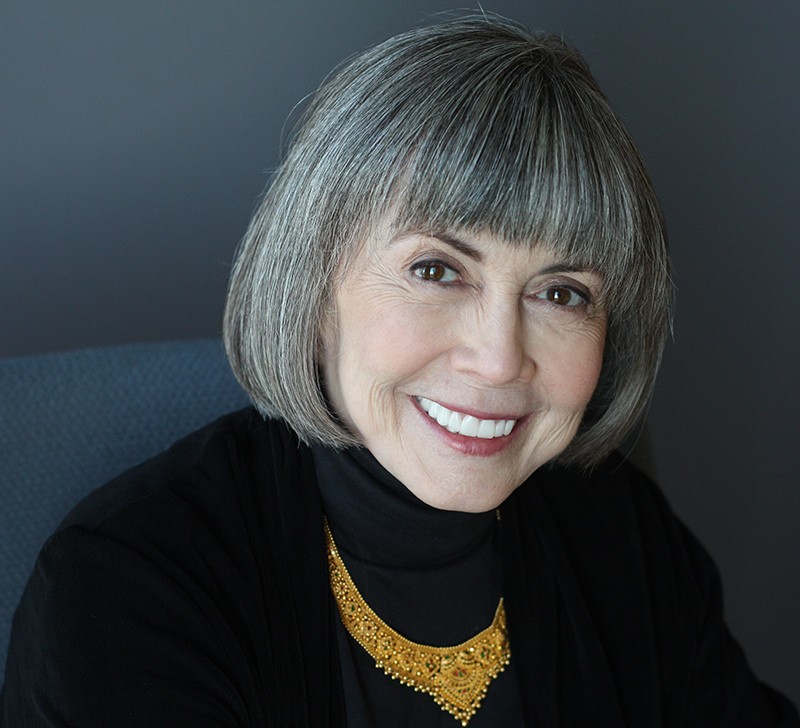 "I thought that if Chris and I collaborated, it might be a lot of fun."

Melissa Parker (Smashing Interviews Magazine): Anne, why the almost 30-year wait to publish a sequel to the novel The Mummy?

Anne Rice: Well, initially, things happened at the time. I had planned immediately to do a sequel, but things did happen, just personal things. My father was very sick, and at that time, he passed away. One thing led to another. I just got away from the material, and I kept meaning to go back and meaning to go back. But I wrote a lot of different novels during that period. I must’ve written 25 since that time. We were thinking about it and talking about it and how much the readers are always asking for the sequel to Ramses. It seems to be one of the most popular books if you go by what they say when they come through the autograph line or when they post on Facebook. They’re always saying, “What happened to Ramses?”

Melissa Parker (Smashing Interviews Magazine): And your decision to collaborate with Christopher?

Anne Rice: I thought that if Chris and I collaborated, it might be a lot of fun. Ramses had been published as a paperback original, and it was meant to be a sort of romping entertainment, a little less serious maybe than other books, maybe, depending. But what I found out was that the readers care very much about it just as much as the other books. Often, they said that it was their favorite. Anyway, I thought that Chris and I might collaborate because I wasn’t coming up with a plot, and we could sit down with a notebook and work on it. We did, and sure enough, it came together with both of us working with a big sketchpad and a felt tip, and we came up with a plot.

Chris sat down and did the first draft, and I was impressed. I really was (laughs). There were things I thought we should change, and things we should do, and he agreed and went back and did a second draft. I added writing here and there, but he did most of the heavy lifting on this book. He really did. I wrote a lot about Julie and Ramses and Elliott, but he also wrote about those characters. I added some things I felt were important, and we talked about tone and so forth, but one of the thrilling things about the reviews so far is that people can’t tell who wrote what and often, if they try to guess, they’re wrong, and I think that’s great.

I’m glad that together we made a tone that was coherent and that people enjoyed. I’m really pretty happy about that. It’s coming out as a paperback original like the last one, and so far, so good.

Melissa Parker (Smashing Interviews Magazine): How are his writing habits different from yours?

Anne Rice: I think we’re very similar. We both pitch ourselves into a draft and work until it’s finished. Chris worked intensely, and he got that draft to me. I don’t know what had been stopping me from doing the sequel. Maybe it was the absence of a plot, but he has a great gift for plots, and he has a great gift for those characters, particularly the character of Cleopatra in the novel and Sybil Parker. Sybil Parker was his creation. Cleopatra was from the original book, and he really threw himself into that character and wrote some scenes that I just thought were great. I guess what knocked me out was that he was able to go into the period and write 1819 and get that voice because he’s never done anything historical like that before that I know of.

Melissa Parker (Smashing Interviews Magazine): Speaking of Sybil Parker, an American writer of historical romances, was that a nod to anyone in particular?

Anne Rice: (laughs) You know, I never asked him. I didn’t ask that question. We just focused on the work. At least one reviewer thought I wrote the Sybil Parker character and that I was talking about myself, but actually he created that character.

Melissa Parker (Smashing Interviews Magazine): Are you interested in collaborating with Chris again?

Anne Rice: I enjoyed this so much. I would like to do some other books with Chris because it’s a great incentive to get books completed by working with another person. They fire you up. They inspire you. You see things you didn’t see before, and that is a very good thing to go with. We might be able to do some sequels to some of my other older series that I haven’t really wanted to bring back to life since then, and I want to talk to him about that. But I’ll tell you what’s holding us up. It’s the television series. We’re working on The Vampire Chronicles as a TV series, and we’ll eventually be doing that full time. So I’m eager to use this time for writing intensely.

Christopher is already writing scripts on the show, and I don’t know how much time he’ll have. I’m hoping we can do another Ramses book. I do have a bang-up plot, speaking of plots. Once the dam broke, it broke (laughs). I have a plot for a third Ramses book picking up right in the middle of the first World War. So we’ll see if we can get that one done. I hope so. But, I tell you, it was really great. I’ve never collaborated with anyone before, but I trust Chris totally, and I really found the whole thing inspiring.

Anne Rice: We just got our producers, Paramount and Anonymous Content, in May, and basically what we’re doing now is preparing a pilot script, and eventually we will take that to a network. A network will become involved officially, and probably then we’ll spend almost a year doing writing for our first season. It’s very exciting. These people we’re working with at Paramount and Anonymous Content are the most brilliant producers I’ve ever worked with. They’re really just incredible, and they’re very dedicated to seeing that the series does not disappoint the readers. I mean, Hollywood’s really changed in the last 20 or 30 years.

There’s a great respect now for the readers. I think it’s due to Game of Thrones, Lord of the Rings and Harry Potter. They really don’t want to disappoint readers now. They know it’s important not to change everything just for the sake of changing it, so we’re in the real Golden Age of television there. But I’d say we’re going to be writing for a year at least before we go into actively shooting.

Anne Rice: Well, you’re certainly right about Downton Abbey. I just loved it, and I keep looking for something like it, and I don’t find it. I’m just enjoying a lot of new things that are coming out of England like Prime Suspect: Tennison. It’s a grim, gloomy cop show that’s wonderfully done and really good, but it doesn’t take you back to Downton. I would so love to have something like that. I think everybody would.

Melissa Parker (Smashing Interviews Magazine): If they would just do a Downton Abbey film or reunion miniseries!

Anne Rice: Absolutely, and I would be thrilled if the Brits bought the dramatic rights to our Ramses series because it’s all set in London mostly, so that would be wonderful to see them give it their full blown China Sterling Silver approach (laughs).

Melissa Parker (Smashing Interviews Magazine): Yes, it certainly would. The last time you and I spoke was two days after Donald Trump won the election. I asked what your thoughts were at that time, and you said, “America has been through worse.” What do you think now?

Melissa Parker (Smashing Interviews Magazine): Do you think Trump will be charged with impeachment during his presidency?

Anne Rice: I really don’t know. I certainly thought that he would’ve been impeached by this time, but that hasn’t happened. We’ll have to wait and see what Mueller turns up. But, I tell you, every day it looks darker for Trump. It really does. There’s more and more coming out, and more and more of the American people are now really concerned about the Russian connection. I’m very glad to see that because I’m a very patriotic American, and it boils my blood to think the Russians interfered with our process, so I’m hoping we will get to the truth of all this.

I can’t really post on this on Facebook because Facebook sends those posts all over to people that are not part of my page or my community, and those people then come to the page, and they abuse us and say terrible things. So we can’t discuss this on the page, and that’s been a very sad thing for me. It started during the election. People were deluging the page with abusive posts, and we now know a lot of that was Russian. That’s come out. But they still do this thing of sending fan page posts to all kinds of people who might be offended by them so they can stir things up, and it’s very frustrating. So I appreciate your asking me. But I know we’ll get through this. I love America, and I’m patriotic to a corny degree. I know we’ll get through it.

Melissa Parker (Smashing Interviews Magazine): Will there be another Lestat book, Anne?

Anne Rice: Another Lestat book is in the works, but we have no date for it yet. I’m working on yet another one after that one, so at least two more Lestat books, I think, before our life gets wonderfully absorbed into the TV series.

« Christopher Rice Interview: Bestselling Author Collaborates with Famed Mom, Anne Rice, on "Ramses the Damned: The Passion of Cleopatra"
Tommy Chong Interview: "If We Didn't Have Trump, My Life Would Be Perfect" »