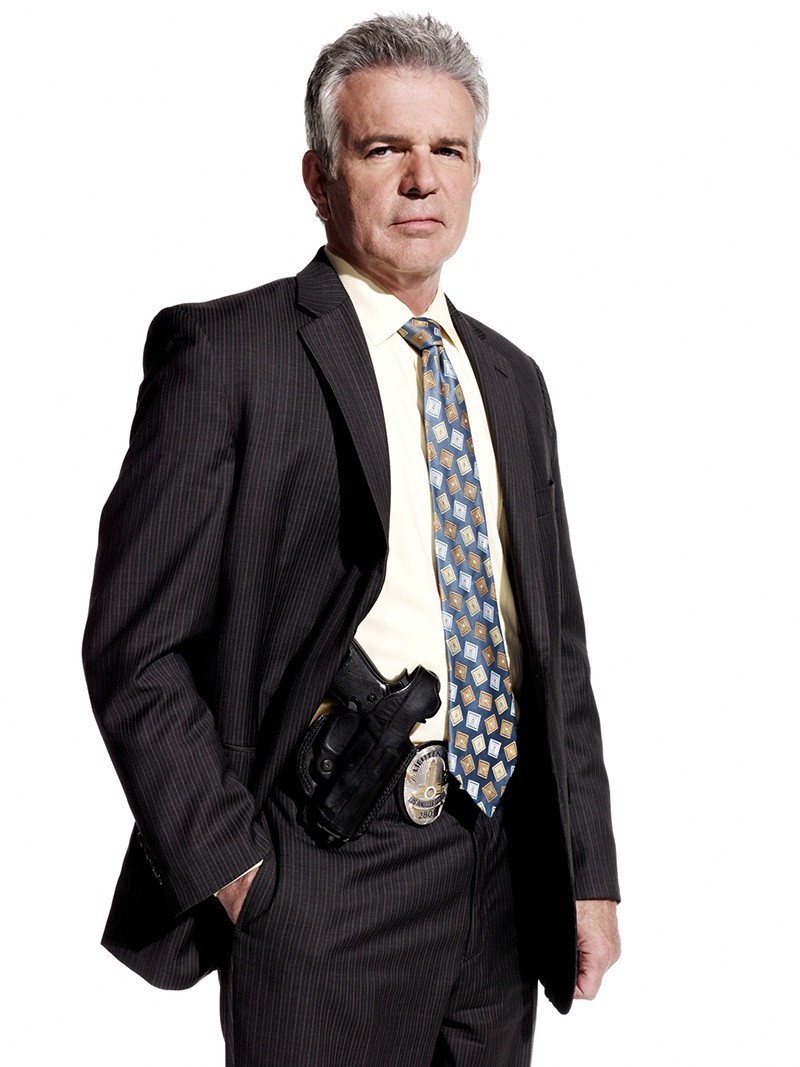 Award-winning actor Tony Denison joined the cast of TNT’s The Closer as Detective Andy Flynn in 2005. Transitioning his role onto the spinoff series, Major Crimes, Flynn is a consistent fan favorite known for his antics opposite G. W. Bailey’s Lt. Provenza and for his character’s rumored romance with Mary McDonnell’s Capt. Sharon Raydor. A fourth season of Major Crimes premiered on June 8, 2015.

The New York native is well known for his role in the critically-acclaimed drama Crime Story as mob boss Ray Luca where he was recognized by Time magazine as “Television’s Best Villain of the Decade.” Other television appearances include Wiseguy, City of Hope, The Amy Fisher Story (TV film), Getting Gotti (TV film), Charmed, Criminal Minds, Prison Break, Walker, Texas Ranger and as head coach Mike George in ESPN’s drama series Playmakers.

Melissa Parker (Smashing Interviews Magazine): Ten years as the same character on television is something most actors only dream about, Tony!

Tony Denison: Yeah. I don’t want to sound cliché, but I’m definitely living the dream. It has been wonderful. Major Crimes is a great show with obviously a great cast, a great group of people. It’s wonderful. We are in year eleven with the squad. Come visit me in another eleven years, and maybe then I’ll be ready to hang up my rock and roll shoes as they say. But right now, I’m still diggin’ the heck out of it.

Melissa Parker (Smashing Interviews Magazine): Detective Andy Flynn wasn’t even supposed to be a regular character. Am I remembering that correctly?

Tony Denison: You are 100% correct. I was a recurring guest star. Then in the second year, Michael Wright, the head of TNT at the time, said, “You know those two episodes in a row where Flynn wasn’t on the show? That’s two episodes too many without him, so let’s make him a regular.” That’s how that all came to pass. So thank you Michael Wright.

Melissa Parker (Smashing Interviews Magazine): Do you feel like after three years, the show has sort of come out of The Closer’s shadow and into its own even though they’re really not that different from each other?

Tony Denison: I don’t know. When did he start that rumor?

Tony Denison: I don’t know anything about her coming back at all. It was a surprise to me that you’d hear that. I don’t think that’s the case, but I’m sure James likes to tease everybody as much as the next person.

Melissa Parker (Smashing Interviews Magazine): I understand the episode airing on June 29 is a funny one and concerns a Dodger’s game. That reminds me of a certain Closer episode where Flynn and Provenza have Dodger tickets, but they find a dead body in the garage …

Tony Denison: (laughs) Oh, the skybox tickets, yeah. In this episode, it just seems to be that Provenza gets tickets to a Dodger game, and then all of a sudden, something happens where he’s not going to be able to make it, or if he does make it, it’s going to be kind of frustrating along the way (laughs).

Melissa Parker (Smashing Interviews Magazine): (laughs) I love those Flynn and Provenza comedic situations. What can you tell me about the rest of the season?

Tony Denison: I don’t want to be too cute about that, but I don’t ask what happens on the show. I take each episode and try to the best of my ability to make everything I do on the show fresh and new. So I don’t really want to know what happens next because it might influence how I play the episode that I’m currently doing.

I can only tell you what’s coming up in the next episode. In the episode after this one, which will air on July 6, Flynn is involved in something interesting and funny. It’s really cute what he’s involved in and gets needled by Provenza. It’s in relation to #Shandy (Sharon + Andy), Flynn's relationship with Capt. Raydor.

Melissa Parker (Smashing Interviews Magazine): How do you personally feel about the relationship between the two?

Tony Denison: I don’t know. It’s the first time I’ve ever really done anything like this. I’ve had romantic scenes before with other actresses, but this is the first to mirror real life because they are together in the squad. Former LAPD detective Mike Bertram, who is now a producer on our show, says this stuff happens all the time, but there are certain safeguards and certain protocols of behavior that we need to be aware of. I don’t really know what that is and don’t want to know.

I want to do the episode and be surprised as to how things progress. But I can tell you that it is progressing. As an actor, I love any opportunity I get to work with Mary McDonnell, and as a romantic interest, it’s great.

Melissa Parker (Smashing Interviews Magazine): Why is “courage” the theme of this season?

Tony Denison: Well, courage is an interesting thing. Courage is sort of the absence of fear. You must move forward into the unknown, which is courage. What you do when you get over there depends on the situation, and you try to adapt as quickly as you can. Any opportunity where an actor gets to portray that, be it cop drama, army or hospital show, is always exciting.

Melissa Parker (Smashing Interviews Magazine): Tony, did I hear that you are the king of selfies?

Tony Denison: Yes. My publicist is always there saying, “Take pictures with the guest stars!” (laughs) I take the pictures, and she does with them as she pleases. [Publicist interjects]: His fans are salacious for them. They are so wonderful. He tweets live with them on Monday nights during the east coast airings, and they are just so interactive. They always say, “More selfies! More selfies!” Tony has been very generous and wonderful with everyone.

Melissa Parker (Smashing Interviews Magazine): Who are the “Flynn Girls?”

Tony Denison: I understand they’re women from all walks of life. They’re all ages … as young as twenty and some certainly older than that. And I’m happy for any attention. I love women. I think they’re all great, and I’m particularly happy with the attention I’m getting in that regard. Keep it coming. Keep it coming.

Melissa Parker (Smashing Interviews Magazine): (laughs) There you go! Does the taping schedule leave time for a social life?

Tony Denison: I spend a lot of my social life dating obviously, but I also spend a lot of it in recovery. I try to be of service to people who may be having a tough time with some sort of an addition be it alcohol or drugs or both. I spend much of my free time doing that.

Tony Denison: Yes, The Sunshine Kids, Best Friends Animal Society, any groups that are involved with children and animals. They need support, and whatever support I can give be it physically or financially, I’m willing to do.

Melissa Parker (Smashing Interviews Magazine): You have some films coming up?

Tony Denison: Two films are about to enter into festival. One came and went and underwhelmed people (laughs). I’m trying to get some shows off the ground on my own now that I could produce and not necessarily act in them. That’s what I’m trying to do. I have a production company with my dear friend, Joel Bess, called Jucilian because he’s Jewish and I’m Sicilian.

Melissa Parker (Smashing Interviews Magazine): Are you still recognized on the street for Crime Story?

Tony Denison: Oh yeah. Crime Story has a cult following. I get people who still come up to me and just tell me how much they loved that show and wish there would be a remake, but Dennis (Farina) and John (Santucci) are both gone, so I don’t think that will happen. I don’t know how it could without Dennis being on the show.

Melissa Parker (Smashing Interviews Magazine): Didn’t you just get killed off on Sons of Anarchy?

Tony Denison: That was a lot of fun, and they were big fans of Crime Story. They said, “It’s crazy that we haven’t had you on the show all these years. Would you like to come on?” I said, “Yeah. Of course I would.” They made it possible for me to appear. Major Crimes is shooting at the same time, so they changed their schedule to accommodate me, which is really a great compliment.

Melissa Parker (Smashing Interviews Magazine): Very nice. I’m still waiting on you to appear on Criminal Minds in the role of a serial killer.

Tony Denison: That might happen because a good friend of mine, who’s a former FBI agent, is one of the executive producers. So who knows? I might show up there as a killer. I’d love to play a cowboy, and the other thing I’ve not played, believe it or not, is a lawyer. I’ve not had an opportunity to play that. I’d love to play a lawyer and a cowboy. Maybe I could play a lawyer cowboy like Bob Hope did in The Paleface, playing a bad cowboy and a bad dentist (laughs). I love doing what I do. I love it all, so any opportunity I get to work, I’m happy.