Titus Welliver Interview: "Harry Bosch Is a Guy Who’s Never Going to Ride Off in the Sunset" 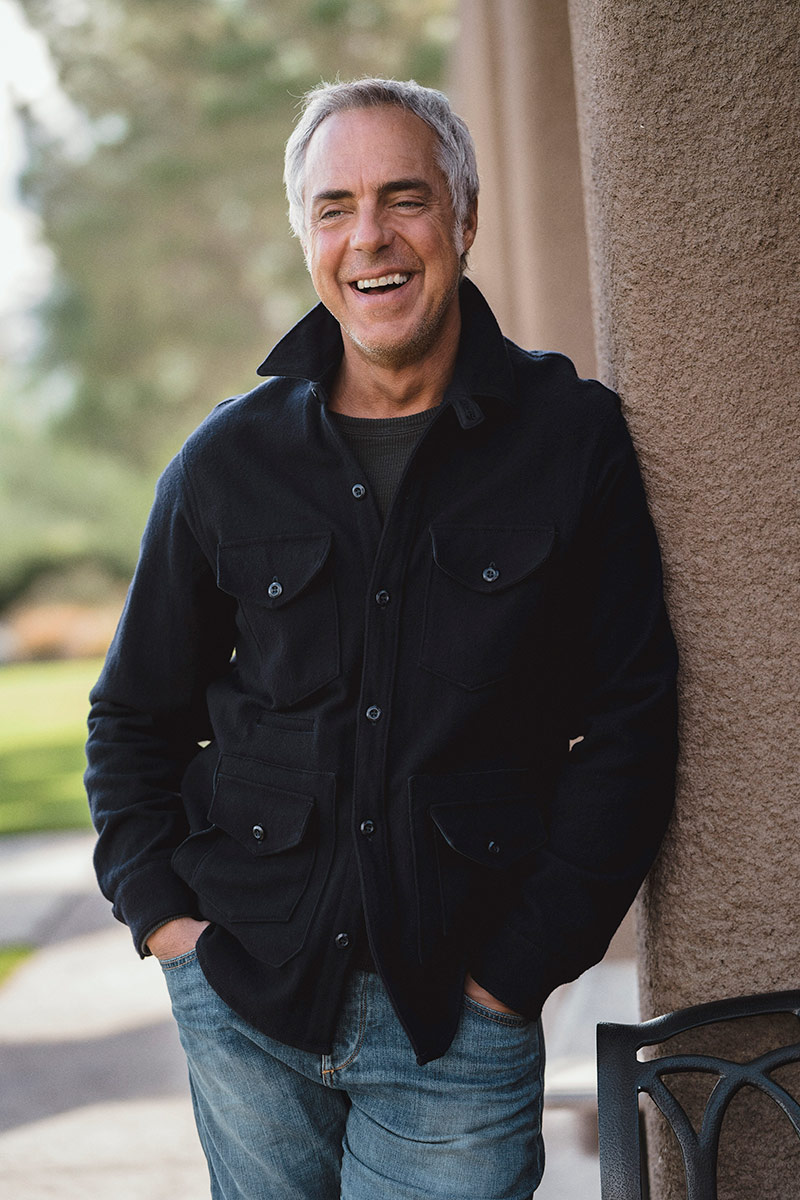 Titus Welliver is best known for his portrayals of the Man in Black on Lost, Silas Adams on Deadwood, Jimmy O’Phelan on Sons of Anarchy and the title role in Bosch, the police procedural series produced by Amazon Studios. Other TV appearances include The X-Files, NYPD Blue, Brooklyn South, Star Trek: Voyager, The Good Wife, Agents of S.H.I.E.L.D., The Last Ship and Chicago P.D.

Bosch, also starring Jamie Hector, Amy Aquino, Lance Reddick and Madison Lintz, is based on bestselling author Michael Connelly’s detective novels. A fourth season, based on Connelly’s book Angels Flight, is scheduled to premiere on April 13, 2018, on Amazon. The show has also been renewed for a fifth season in 2019.

"We’re never going to see a kinder, gentler version of Harry, but I think he evolves. And his emotional intelligence evolves a bit with Maddie there in his life, and we do see a bit of that."

Melissa Parker (Smashing Interviews Magazine): Titus, can you give us an overview of season four of Bosch?

Titus Welliver: The season centers around the murder of a prominent Civil Rights attorney who’s representing a man who was tortured in police custody. He’s murdered on the eve that he’s to settle with the police department in the city, and he pulls the plug and reneges on the settlement. That indicates to both the City and the police department that he has some kind of evidence that will bring forth a considerably larger cash settlement and may move higher up the chain. The implications are considerably larger.

Chief Irving assigns the case to Harry Bosch because Harry has never gone up against this lawyer, and he also knows that, despite the fact that there are many police officers whose careers have been destroyed by Howard Elias, Harry will operate and investigate without bias. If it’s a cop that did it, then it’s a cop that did it, and Harry doesn’t care. That’s the great thing about his moral compass. It doesn’t matter who did it. It’s who did it. There are many other variables. This season picks up very shortly after the last season concluded, so it’s more of a continuation, and Harry, as we saw at the end of the last season, had obtained new information about his mother’s killer who turns out to be the head of the LA police commission. Harry is very much pursuing that on his own time off the books and against the advice of Chief Irving who warned him off and said, “That’s something you don’t want to mess around with.”

Maddie is still living with Harry, and they’re still figuring each other out, and Harry’s ex-wife Eleanor is working herself back in the good graces of the FBI. Harry and Edgar are still very much estranged. Edgar is in the process of recovering from the gunshot wound, and now Harry has to lead this task force in the investigation of the murder, which also places him squarely at odds with his own department. The Koreatown killer is still riding his bike around killing people. There is a lot going on.

Melissa Parker (Smashing Interviews Magazine): Maddie sometimes seems to be the parent of Harry instead of the child. Will their relationship continue to evolve, and would it be possible she could bring out the gentler, less confrontational side of Harry?

Titus Welliver: Well, yes, I would say this is the season in which we delve into that deeply and really, really flesh out that relationship, which makes me very happy because I love working with Madison. A side note of that is, as an actor, I’ve watched her grow up on our show. She was still a kid, and now she’s a young woman. She’s 19 years old, so there is a bit of that. Some of it is that they’ve not necessarily figured each other out. She’s kind of the one person in the world that can really draw Harry out.

We’re never going to see a kinder, gentler version of Harry, but I think he evolves. And his emotional intelligence evolves a bit with Maddie there in his life, and we do see a bit of that. He is a deeply private and internalized character, so he’s never going to do a complete display of his inner turmoil. But the relationship with Maddie is very strong, and through a series of events and trials and things, they work through a lot of stuff. I think we see them on the other side. At the end of the season, we see that relationship very, very strong, very connected, but they’re not sipping a milkshake and singing songs.

Melissa Parker (Smashing Interviews Magazine): Will your son, Quinn, and your daughter Cora return for any episodes this season?

Titus Welliver: Actually, it’s very funny because originally, Quinn was going to return this season, but it was for a flashback when Harry was 13. When Quinn made his first appearance, he was 14. No. What am I saying? He was 12. Then last season, he came in and played Harry at the actual age he was, which was 15. Now he’s 16. He’s had a huge growth spurt. He came on the set just to hang out as he is wont to do, and the producer said, “For this flashback that Quinn was going to come back and do, he’s supposed to be 13. He’s 6’2” and there’s no way.”

Titus Welliver: Yeah. So we had to basically find a Quinn Welliver type to play Harry. He’s 12 in that scene because it’s the scene with his mother. But both my son Quinn and my son Eamonn will come on. Quinn will definitely return at some point, and we also want to bring in my son Eamonn to play Harry a little bit older, so that we can address Harry’s military stuff. Quinn can do the early military, and Eamonn can come in and play Harry when he’s a young uniformed cop on the street. It’s really wonderful because all three of my kids are really good actors, and both of my sons look exactly like I did at that age, and they’re better actors than I was at that age. So that’s a good thing. Cora came on three years ago, and she’s growing, so she maybe could come back, if not as that character, another character. I swear. You know how kids are. I always say they sleep in manure beds. I turn around the next day, and suddenly they’re towering over me.

Melissa Parker (Smashing Interviews Magazine): Four seasons in, do you still consult with Michael Connelly about the character, or is it like Stephen King recently said, “Titus Welliver IS Harry Bosch,” and you have him down?

Titus Welliver: I have him down, but I also don’t have him down because the value of Michael being a creator/producer is that I can go to him with ideas and ask him. Michael is the measuring tool of which all things I do with or about Bosch. He’s the guy. I always say, “Who do you think Harry Bosch is? He’s Michael Connelly.” There are parts of Michael’s personality that I’ve stolen to put into the realization and characterization of the character. So I will never stop asking Michael questions about it because first of all, it’s his creation.

Mike continues to write books. There’s a new one out October 30 where Bosch meets Detective Renee Ballard. So really, he’s the only person. It’s an ongoing collaboration. Of course, I’m very flattered by what Mr. King said. But I still feel like there are places to go with Harry, and that has to come from Michael.

Melissa Parker (Smashing Interviews Magazine): There could be many more Bosch stories to come, so are you in this for the long haul?

Titus Welliver: Yes. I had that conversation with Michael Connelly when we were doing the pilot. He said, “How long do you see yourself doing this?” I answered him immediately and very directly and truthfully and said, “You know what? I will do this as long as they will have me.”

If you look at the chronology in the latest book, Harry Bosch is 53 years old. He’s retired. He’s working as an auxiliary cold case detective for the San Fernando police department, and he works as a private eye. Harry Bosch is a guy who’s never going to ride off in the sunset. Harry Bosch will go until he goes no longer because that is who he is, and that is the nature of his being. There’s nothing that I don’t love about this character. This is a role that gives me inspiration continuously, so I’m in it for the long haul.

« Rick Astley Interview: “I Don’t Want People to Think I’m Reliving ‘Never Gonna Give You Up’ Because of the Rickrolling Thing”
Jonathan and Drew Scott Interview: An In-Depth Conversation with the Property Brothers »