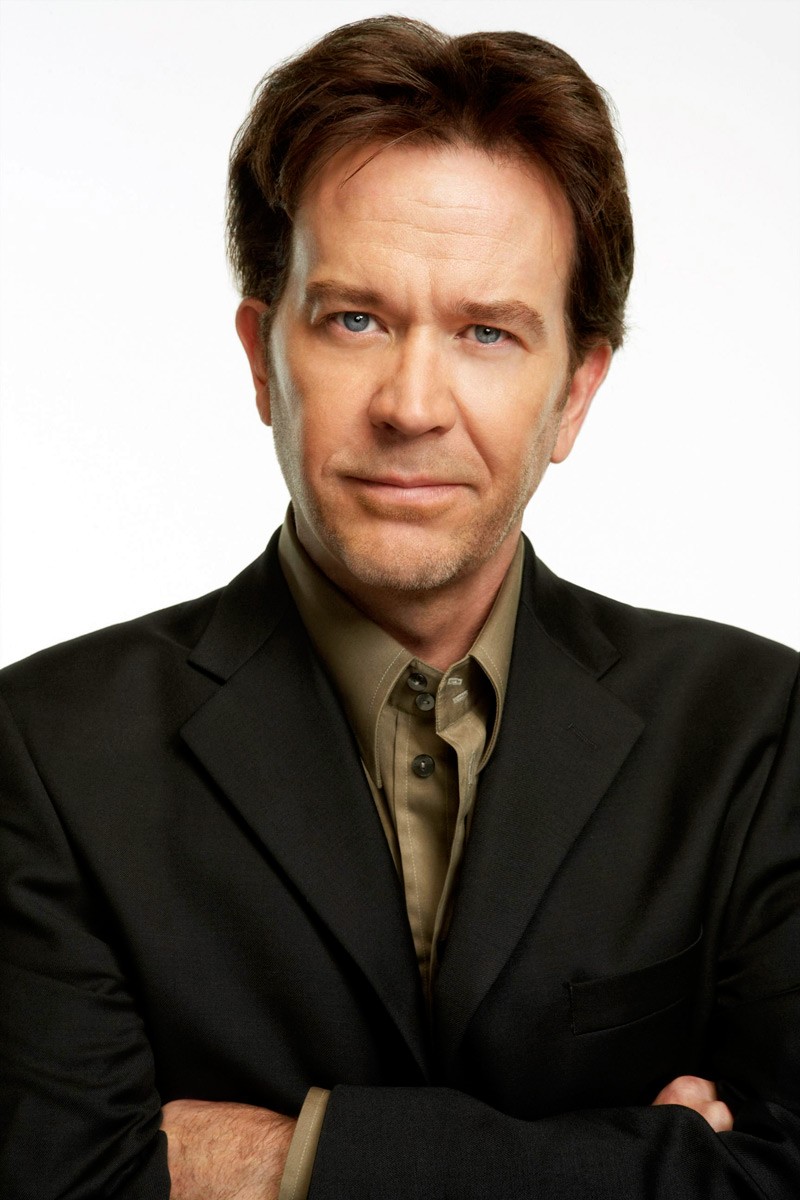 Born on August 16, 1960, actor Timothy Hutton holds the distinction of being the youngest actor to win the Academy Award for Best Supporting Actor, which he won at age 20 in 1980 for his first feature film Ordinary People.

To date Hutton has played numerous roles on the big screen and on television. He starred as detective Archie Goodwin in the A&E television series A Nero Wolfe Mystery (2001-2002), directed the family film Digging to China in 1998, and had a lead role in the NBC series Kidnapped. He appeared in 15 feature films from 2006-2008.

The actor’s dad, Jim Hutton, was best known in his later years for portraying NBC TV’s Ellery Queen. However, he began in feature films starring opposite such stars as Bob Hope, Samantha Eggar, and Cary Grant, and appeared in two John Wayne films: The Green Berets and Hellfighters. Jim Hutton lost his battle with liver cancer on June 2, 1979, and his son dedicated his 1980 Academy Award to him.

Hutton is currently starring in the TNT drama series Leverage as former insurance fraud investigator Nathan Ford. After his son’s death and being betrayed by the insurance company he was working for, Ford falls into a downward spiral … until he has a chance at revenge and organizes a five-person team comprised of con artists who use their individual skills and talents to right corporate wrongs and government injustices inflicted on common citizens.

Leverage premiered in December 2008 and the first season consisted of 13 episodes. The second season will run in two parts; the second half returns on January 13.

Timothy Hutton: Yes, it will be six episodes starting on Wednesday, January 13, at 10:00, and running all of the way to February 17.

Melissa Parker (Smashing Interviews Magazine): What happens next for the team?

Timothy Hutton: Well, we’re all very excited about the six shows that are coming up. They represent some of the most interesting, kind of complex cons and heists that we as a team have pulled off.

We have one about a corrupt mayor (played by Richard Kind) of a small town. We have one with Luke Perry as a guest star who plays a phony television psychic who preys on people’s money. We infiltrate his organization and take that apart.

The premiere (the one on January 13) is one of our most fun. The team gets inside the fashion industry – it’s called "The Runway Job" and Nate becomes kind of an outrageous fashion designer so he can be part of the con and pull the wool over the eyes of the people organizing the fashion show. They’re involved in not-so-good business dealings so that’s a good one, and everyone plays a character in that. So, we’re excited about that one.

Melissa Parker (Smashing Interviews Magazine): Will Gina Bellman be returning to the show?

Timothy Hutton: Oh yes, Gina will be back. Gina’s presence will be throughout all six shows that are coming up starting on January 13. Her character just went away a little bit to find herself. Of course, Sophie has many personalities so she’s finding more than one self.

Melissa Parker (Smashing Interviews Magazine): Will there be a relationship between Sophie and Nathan this season or the next one?

Timothy Hutton: You know, I don’t know, they definitely approach it and get skittish about it and then approach it again and there’s a nice conclusion to one aspect of their relationship, but that happens on the very last moment of the very last show, which will be February 17. Then we’ll have to wait and see if that moment leads anywhere when the 3rd Season starts in early summer.

Melissa Parker (Smashing Interviews Magazine): Do you do any of the writing or have you produced any of the episodes?

Timothy Hutton: No, I’m just there to play Nate and it’s a wonderful group of people working on the show – the writers and the directors … it’s all very collaborative.

We sometimes come up with dialogue on the spot, but the writers are so great and the stories are so wonderful that pretty much most of the time we just come on the set and have fun working out what’s on the page.

Melissa Parker (Smashing Interviews Magazine): I think the show is funny and smart. One of the things that make it successful is the chemistry between the characters. Did you feel that chemistry immediately or do you think that took a couple of episodes to really gel?

Timothy Hutton: You know, it’s one of those things that you can’t plan for. You can have the best script possible, the best story, the best characters, and hire the best actors, but the one thing that you can’t guarantee … people can’t necessarily plan for  chemistry.

It happened immediately, we all felt it. When we were in Chicago doing the pilot for the show, I don’t think we were aware of it in the sense that we spoke about it, but I think we all had a level of comfort. It usually takes a lot longer to achieve.

People around us said, “Boy, you guys are really something … you look like you’ve known each other for a long time and the way you interact is so fun, you’re so infectious to be around.” That just kind of carried us through. The five of us generally like each other and like being around each other. From the beginning we just ripped off one another quite smoothly.

Melissa Parker (Smashing Interviews Magazine): Were you hired at the same time?

Timothy Hutton: Yeah, we were all hired around the same time, just weeks before the pilot began.

Melissa Parker (Smashing Interviews Magazine): The show has been described by some as Burn Notice meets A-Team. What do you think?

Timothy Hutton: I think there is a little Mission Impossible mixed in, a little A-Team, a little bit of the movie The Sting.

There was a wonderful series when I was a kid … The Man from U.N.C.L.E. I think the main character could have been from that show.

Melissa Parker (Smashing Interviews Magazine): Did you know you wanted to act at an early age because of your dad?

Timothy Hutton: You know, not really. It was something I knew as a kid that my dad did for a living, but I didn’t really connect to it in any way.

I was not an extroverted kid. I was shy, I played sports, and I stayed to myself. Not to say you had to be an extrovert to be an actor, but when you’re a kid and you want to get into it, most have a knack for getting in front of people and performing or telling a story or whatever the case might be. I certainly was not that kind of kid. I was interested in other things.

It wasn’t until I was 16 or 17 years old in high school where it kind of came on suddenly when I was taking a singing study class and I was really enjoying the process of rehearsal. Each time you rehearsed things would start to get better and it felt like music to me the way it all kind of came together; the need to work with the other people doing the parts to make it right. It was a wonderful kind of combination of speaking and listening all at the same time.

Melissa Parker (Smashing Interviews Magazine): Is there one piece of acting advice from your dad that has helped you the most in your career or in life?

Timothy Hutton: He never really spoke about acting and he didn’t offer any advice about acting itself. Unfortunately he passed away around the time I was just starting, but he had said, “Keep your head up, there are no guarantees in this job. Always work hard as if it’s the first time you’ve gone out there and don’t take anything for granted.” He basically said to remain positive and don’t let anything impede you.

Melissa Parker (Smashing Interviews Magazine): What were your very first thoughts when you heard your name announced as the winner of the Academy Award for Best Supporting Actor (Ordinary People in 1980)?

Timothy Hutton: Well, that whole period of time is so surreal to me. I was just about ready to go to … well, no, I had been already – I’d been in rehearsal for two weeks already in Valley Forge, Pennsylvania working on Taps. So, I was in Pennsylvania and I was going back to Los Angeles for the ceremony, and my mind was kind of completely with the new film I was about to do.

But, then, there I was sitting there and it was a very strange weekend because I think the ceremony was supposed to be on a Sunday and President Reagan was shot and the ceremony was postponed. It was cancelled for the day. I remember sitting in my living room getting ready to go to the Oscars when it was all over the television about what had happened and everyone was very concerned and startled by the news.

The next day it was still very much on everyone’s mind, but you asked what happened the moment my name was read and I don’t even remember other than I think I had to ask somebody if I heard correctly, you know (laughs). A long time ago I saw a clip of it and I remember seeing myself sitting there and that’s exactly what it looked like … that I just wasn’t quite sure I heard it correctly. Somebody pushed me from behind – I forgot that when that happens you’re supposed to get up and go (laughs).

Melissa Parker (Smashing Interviews Magazine): Ordinary People is a favorite film of mine and you did an extraordinary job.

Timothy Hutton: I have a movie out right now playing in a few cities called Serious Moonlight with Meg Ryan and directed by Cheryl Hines. I have a movie coming out in March called Multiple Sarcasms and that’s with Dana Delaney and Mira Sorvino.

There is one coming out over the next six months or so, called The Ghost with Ewan McGregor and Pierce Brosnan and Roman Polanski directed it.

© 2009 Smashing Interviews Magazine. All rights reserved. This material may not be published, broadcast, rewritten or redistributed without the express written consent of the publisher.