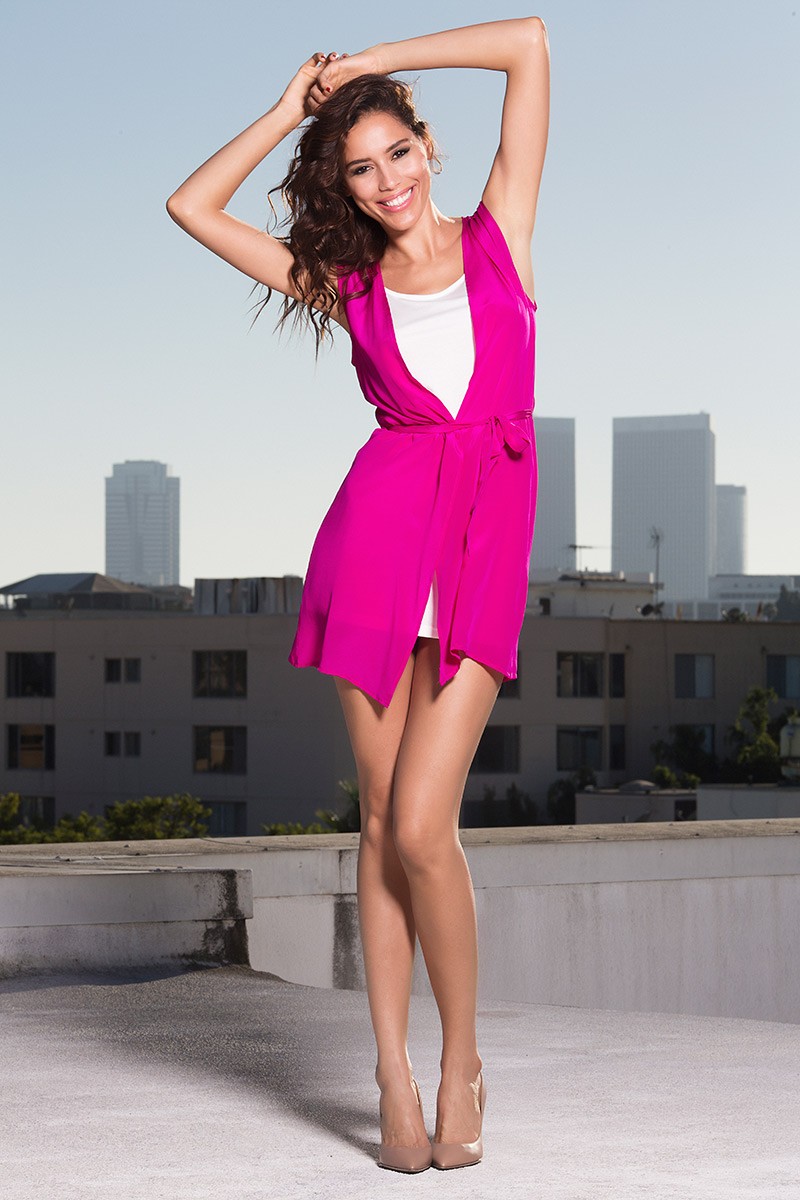 At the age of fourteen, Da Costa was discovered during a model search and capitalized on her natural beauty and height (five eleven) debuting at Milan Fashion Week at the age of sixteen and began gracing the runways all around the word for Giorgio Armani, Yves Saint Laurent, Escada and Hugo Boss, to name a few and also became the face of campaigns for Chopard, Swarovski, Nokia and L’Oreal.

"I play a character named Rivka who is staying in the same motel as John’s character (Jack), and we somehow just meet. We develop a relationship. It’s a very dialogue driven type of movie and very interesting. Funny enough, my character’s name, Rivka, is Rebecca in Hebrew. I thought that was a funny coincidence. Rivka is very witty and sharp, but you’re never quite sure if what she says is true or not. Throughout the movie, all these layers start to come off, and Jack learns more and more about her. It’s an amazing movie."

After a visit to Los Angeles prompted a permanent move to the states, Da Costa decided to focus on her true passion for acting and booked her first lead role in an indie film titled L.A. I Hate You. Her credits expanded to include a stint on HBO’s Entourage and lead roles on Free Runner, Mine Games and 7 Below with Val Kilmer and Ving Rhames. She recently wrapped filming Breaking at the Edge with Milo Ventimiglia and Andie MacDowell.

Melissa Parker (Smashing Interviews Magazine): Rebecca, tell me about The Bag Man and your character.

Rebecca Da Costa: This movie is about a hitman played by John Cusack. He doesn’t want to do his job anymore and wants to quit. His boss (Robert De Niro) says, “Okay. You can quit, but you have to do one last job.” That job is to go to this motel in the middle of nowhere to protect this bag for his boss. But the deal is that he can’t look inside of the bag.

I play a character named Rivka who is staying in the same motel as John’s character (Jack), and we somehow just meet. We develop a relationship. It’s a very dialogue driven type of movie and very interesting. Funny enough, my character’s name, Rivka, is Rebecca in Hebrew. I thought that was a funny coincidence. Rivka is very witty and sharp, but you’re never quite sure if what she says is true or not. Throughout the movie, all these layers start to come off, and Jack learns more and more about her. It’s an amazing movie.

Melissa Parker (Smashing Interviews Magazine): Was it a physical role for you?

Rebecca Da Costa: Yes. I did some stunts actually. Rivka is very fearless, runs up and down and shoots everywhere. They had a problem with my stunt double, so I ended up doing all my own stunts which was so fun and one of the coolest parts for me (laughs). In order for me not to kill myself doing those stunts, I had some preparation with a stunt coordinator for three days just to learn the ways of doing things.

Rebecca Da Costa: All except for a week in New York.

Melissa Parker (Smashing Interviews Magazine): Was that the first time you had visited New Orleans?

Rebecca Da Costa: That was my first time, and I loved it! It reminded me a lot of my country Brazil.

Rebecca Da Costa: Oh my God, yes (laughs). The food, the people, the music. I felt right at home.

Melissa Parker (Smashing Interviews Magazine): Let’s talk about Robert De Niro. He is usually thought of as a pretty quiet guy off the screen. How would you describe him?

Rebecca Da Costa: He is very quiet and also a very humble man. He’s a legend, and you never know how people are going to be in real life. But he was so humble, giving and professional. He didn’t give me any acting advice, but we did exchange a lot of ideas. There’s a scene where we are supposed to have a dialogue and at the location, there was this big harp. He looked at me and asked, “How would you feel about playing a harp?” Of course, I have no idea how to play a harp, but I said, “Well, I can try.”

We used the thing as a prop, and the scene just became beautiful. Of course, they did the background sound in editing so it looks like I’m really playing the harp, but we just really had this freedom to create. Robert De Niro was very open to that. I met his family, I met his wife and daughter. He’s quiet, but he’s a nice, simple human being, and of course amazing to work with.

Melissa Parker (Smashing Interviews Magazine): Is John Cusack as cool as he looks?

Rebecca Da Costa: Oh my God, he’s on fire, that man! He’s so talented and creative. Let me tell you, his mind goes like a million miles an hour. He’s always thinking about how he can make the scene better. John looked at me and said, “Rebecca, our connection must be real. If our connection’s real, everything is going to fall into place.” He was just so open and so caring all the time and he took care of me. I’m the biggest fan of that man right now!

Rebecca Da Costa: Yes! We have a relationship that develops, and we have this attraction. We do kiss, yes (laughs).

Melissa Parker (Smashing Interviews Magazine): I imagine the kissing scenes were not difficult to play (laughs).

Rebecca Da Costa: Oh not at all (laughs). To my surprise, I didn’t expect him to be so tall. I should know, right? But I did not know. He’s like six four. He’s huge and very strong and very good looking. So it was very good (laughs).

Melissa Parker (Smashing Interviews Magazine): After the publicity of filming The Bag Man, have you found yourself in greater demand as an actor?

Rebecca Da Costa: Definitely. To work with this cast in this movie has opened up a lot of doors. I’m being offered roles, and there are many opportunities coming because of this movie. I’ve been here in Hollywood for four years and have done eight movies so far. I feel extremely blessed, but I think that a career is made by steps. Even when you climb a hill, there are more hills to climb. It’s a ladder, so I hope I keep going up and up. I can’t wait for the movie to be out so people can enjoy it.

Rebecca Da Costa: I have two brothers. My mother and my middle brother are in Brazil. My father unfortunately passed away last year, but my younger brother is here with me right now. He’s a fighter of Mixed Martial Arts, and he has been living with me for the past few months. It’s nice to have somebody from my family with me.

Melissa Parker (Smashing Interviews Magazine): What has been your family’s reaction to the fact that you are starring in a major motion picture with two acting giants?

Rebecca Da Costa: Oh God. You know how mothers are! She is just so proud. She keeps posting things on Facebook and social media. Sometimes it’s embarrassing (laughs). But they are just proud. It is my biggest … how you say … incentive.

Melissa Parker (Smashing Interviews Magazine): Was it scary to leave home at fourteen?

Rebecca Da Costa: I went first at fourteen to Sao Paulo in Brazil for two years, but then at sixteen, I had my first international trip to Milan. It wasn’t scary at all because I’ve always been very adventurous. Of course, you’re also naïve at that age and not fully aware of the dangers of the world. In my mind, I thought, “Oh my God! I’m getting out of the house to explore the world.” That was so cool.

Rebecca Da Costa: I’m just concentrating on acting now. I stopped modeling about four years ago when my career suddenly took off. I wanted to just focus on it because that’s my passion.

Melissa Parker (Smashing Interviews Magazine): Tell me something about yourself.

Rebecca Da Costa: Well, I definitely have a temper being Latin, but it takes a lot for me to be angry. I love dancing when I’m not working. I try to go dancing with my friends once a week. I love reading. I love to travel. When I’m not working, I like to go back to Brazil for the holidays. I love connecting to people. I’m a big fan of transcendental meditation, just getting in touch with my spirit and developing that part as well. I just like to enjoy life and connect with people.

Melissa Parker (Smashing Interviews Magazine): I assume you’re not married. Do you have a love interest?

Rebecca Da Costa: (laughs) I was in a relationship for many years, but we recently broke up a few months ago. A break up is never easy, but it was a consensual decision. Right now I’m just enjoying people, focusing on myself. I’m very close to my family and have many friends here. I don’t feel lonely. But I’m open. If the right guy comes along, then of course. But right now, that’s not the main focus in my life.

Melissa Parker (Smashing Interviews Magazine): Are you interested in dating an actor?

Rebecca Da Costa: I’ve never dated an actor, believe it or not. But it doesn’t really matter. It would be nice to have somebody that doesn’t work in this business so that at home we could talk about different stuff. But if I fall in love with an actor who has the qualities I like in a man, why not?

Melissa Parker (Smashing Interviews Magazine): And what are those qualities?

Rebecca Da Costa: I think I’m looking for the perfect man, which doesn’t exist (laughs). I think everyone is doing that. But the first thing is that I love a smart man. That’s the thing that most excites me. It would be somebody smart that is very knowledgeable but has a sense of humor. I love funny men. Apart from that, somebody that is outgoing who loves people, is faithful and easygoing. I don’t like drama except when I’m acting (laughs). In real life, I want no drama. That’s about it. Not a lot to ask right?

Melissa Parker (Smashing Interviews Magazine): Of course not (laughs). Any upcoming projects you can talk about?

Rebecca Da Costa: I have a project called Breaking at the Edge that ‘s coming out in the summer. Right now, the first six months of this year, I’m very busy promoting The Bag Man. There is a project that may be shooting in Brazil, but I can’t talk about it yet. I hope it’s going to be a good year.