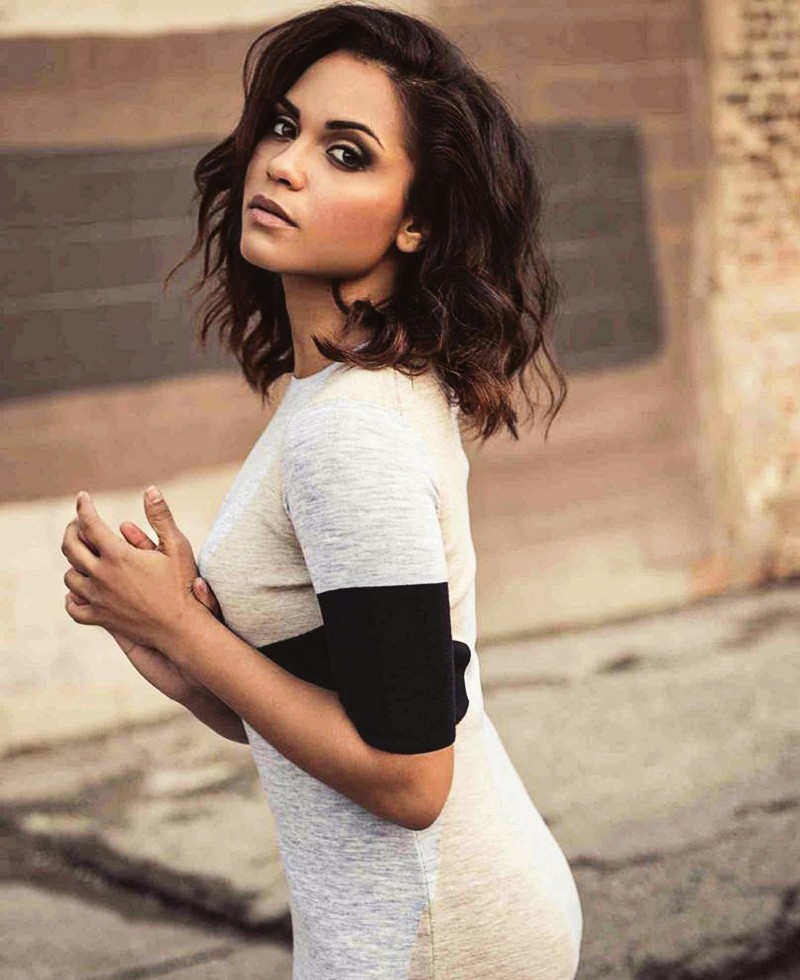 A graduate of The Juilliard School, Raymund is the recipient of the John Houseman Award for her commitment and dedication. Immediately following graduation, she went on to star opposite Tim Roth for three seasons in Lie to Me, a crime drama on the Fox network.

Raymund is a founding member of the Mechanical Theatre Project, serves on the board and faculty of the Performing Arts Project, is a board member for the Hollywood Arts Organization in Los Angeles, is executive producing the independent feature Submarine Kid and is the Founder/President of the theatrical production company SISU Theatrical Productions, LLC.

Chicago Fire returns for its second season on September 24, 2013. Raymund is married to writer and director Neil Patrick Stewart.

Monica Raymund: Oh thank you! It was a fun night. I’m pretty honored about it. Thank you so much.

Melissa Parker (Smashing Interviews Magazine): How did you spend your time off from Chicago Fire?

Monica Raymund: Oh man, it was fun. I have a few projects I do over the summer. I’m the lead producer of a new girl power musical called Volleygirls, and I opened it in the New York Music Theatre Festival at the Signature Theater and ended up taking home Best New Show, garnered a lot of attention and filled out a run there in New York City. So that was fabulous. That starred Susan Blackwell and a couple of other Broadway stars.

I’m continuing to produce that show while I’m here in Chicago. I also taught at the Performing Arts Project, which is a non-profit performing arts summer training institute that I co-founded. And so, yeah, that pretty much took up most of my time (laughs).

Monica Raymund: (laughs) I worked through my hiatus, which is so gratifying, but man, I could really use a couple of weeks off.

Melissa Parker (Smashing Interviews Magazine): What has been the response from the people there?

Monica Raymund: They’re the most loyal fans we have. They love it. Well, to our face, they love it. I don’t know what they’re saying behind our backs, but every time we go out together as a cast, people are very welcoming and gracious and supportive. The city’s been nothing but hospitable to us while we’ve been here, and I’m enjoying the city a lot.

Melissa Parker (Smashing Interviews Magazine): Were you told as a group that Chicago Fire had been renewed for another season?

Monica Raymund: Yeah. We were told toward the end of the first season that we got picked up for a second season.

Melissa Parker (Smashing Interviews Magazine): What can you tell me about the second season?

Monica Raymund: If people liked season one, they’d better buckle up for season two! We’ve got even more action coming, a lot more fires, more traumas and more drama. For my character for example, we see a new relationship with her. I won’t say who it is, but it’s with one of the other characters from Chicago Police Department. They have a little bit of a thing going on.

We may or may not see Dawson and Casey begin to sort of spark together in season two. Of course, you see a bunch of strange circumstances and situations that Severide likes to put himself in (laughs). We learn that he has a dark family secret. It comes out in the fourth or fifth episode. There’s a lot of good, interesting, human, strange stories that come up (laughs). It’s fun.

Melissa Parker (Smashing Interviews Magazine): Is the Dawson and Mills relationship finally over?

Monica Raymund: The infamous “Millson.” We’ll see. Right now, the first season ended with them pretty much over. I think that’s going to continue in season two, but we see them try to salvage their friendship.

Melissa Parker (Smashing Interviews Magazine): Will we learn anything more about Dawson’s family in the upcoming season?

Monica Raymund: Right now we don’t know anything else beside the relationship between brother and sister, Antonio and Gabriella Dawson. There will be a lot of collaboration between the new spinoff series, Chicago PD, and our series Chicago Fire, so we’ll see Antonio and Gaby continue to work together. But I actually have not read anything about our backgrounds yet or our parents or anything, so no, not right now.

Melissa Parker (Smashing Interviews Magazine): There will be many crossover plots between the two shows?

Monica Raymund: Yes. You’ll see Chicago PD actors on Chicago Fire and vice versa. You’ll see a lot of firefighters and paramedics on Chicago PD every other episode or every few episodes. The Dick Wolf brand is really trying to take off running with this hybrid cross collaboration. We hope it does well, but we think it’ll create an even stronger dynamic on both shows.

Melissa Parker (Smashing Interviews Magazine): Excluding a love interest, what would you like to see happen to your character?

Monica Raymund: I would love to get my hands dirty even more. I’d like to go and be even more hands on in some of those fires and some of the accidents that happen and really needing to be the person who gets in there. I would love to do that. Run with the boys a little bit more and show off my guns.

Melissa Parker (Smashing Interviews Magazine): Did you research the role with real paramedics?

Monica Raymund: Absolutely. We did a bunch of ride-alongs, especially last year. For several weeks, we did training. I did ride-alongs with two real women paramedics, Michele and Margaret. Michele Martinez is our official paramedic consultant for the show.

We saw some pretty gnarly stuff when we were doing ride-alongs. Like for example, one of the weirdest, craziest things we saw was a jumper on about the sixth floor of one of the university dorm buildings, and he had only his boxers on. He had broken an unopened window with a chair, climbed through the window dressed only in his boxers and got out on the ledge. We watched firefighters pull him back inside before he jumped. It was pretty scary.

Melissa Parker (Smashing Interviews Magazine): Are you squeamish at the sight of blood?

Monica Raymund: It’s funny. I’m actually okay with blood. I’ve got a little bit of an iron stomach, but what makes my knees weak are needles. I don’t like needles at all. So when we have to fake start an IV, I always get a little queasy (laughs).

Melissa Parker (Smashing Interviews Magazine): Have there ever been any close calls with fires on the set?

Melissa Parker (Smashing Interviews Magazine): With so many fires set, I’m sure anything could go wrong.

Monica Raymund: Accidents happen if you’re not aware of all your surroundings. We do out best to make sure it’s a safe environment, but it’s pretty east to get hurt if you’re not paying attention. You have to take care of yourself when on set and be aware at all times.

Monica Raymund: That’s a good question. I grew up as a pianist. I studied classical piano my whole life and started when I was five years old. I was a pretty serious player, and then that launched me into singing which then launched me into singing on stage. I started doing musical theater at a very young age. So I was in the theater and the musical theater scene all through middle school and high school and in the community.

When the time came to apply for colleges, I applied to several conservatories and several liberal arts programs. I didn’t know what I wanted to do, but when I got the Juilliard one, I went ahead and said yes. I’ve been doing that ever since.

Melissa Parker (Smashing Interviews Magazine): Are you planning on having a music career or performing on Broadway?

Monica Raymund: I would love to work on Broadway. I’d love to make my Broadway debut. I will do that at some point in my life. In terms of recording music, I’m not sure. I’m flirting with the idea. My brother’s a music producer and sound engineer. He and I have a couple of projects in the works that we’re doing for fun, so I might. We’re working on a single right now. We’re not really sure yet if we want to release it, but I think I want to (laughs). I’m still flirting with the idea, but it would only be for fun. It wouldn’t be for any big passion or art, to be honest.

Melissa Parker (Smashing Interviews Magazine): How did you meet your husband?

Monica Raymund: We met teaching at another summer program called Broadway Theatre Project about ten or twelve years ago. We’re not affiliated with them anymore, but he and I teach at the Performing Arts Project, the school that we founded together with several of our other colleagues.

Melissa Parker (Smashing Interviews Magazine): You’ve worked on projects together. I imagine that is not without arguments (laughs).

Monica Raymund: It’s basically like learning how to parent a little bit (laughs). He’s the director of a musical I’m producing, and that’s one project we’re doing together. I’ve also produced a couple of plays he’s directed in Los Angeles. It’s hard because in front of everyone else, we have to present a very professional and united front, and at the same time, he’s still my partner.

Sometimes I’ll find myself touching his hand in front of everyone or just being his wife instead of his professional partner. We have to definitely learn the boundaries and lay down what is acceptable, what is appropriate and what is not appropriate. It is difficult sometimes, and you’re right, it’s not without its arguments, but it can actually be very liberating to know someone that well and work on something inspirational that has an important message.

Melissa Parker (Smashing Interviews Magazine): Do you have any upcoming projects you’d like to discuss?

Monica Raymund: I do actually. I mentioned Volleygirls and Performing Arts Project, but I’m also one of the co-founders of a new TV/film production company called Sterling Features. It’s me and three other women based in New York. We have produced now under our title three to four projects, and we’re currently in pre-production for two films coming out.

We’re also executive producing a new indie film called Submarine Kid starring Finn Wittrock, and we’ll begin principal photography in the spring in LA. So I not only have a theatrical production company called Sisu Theatrical Productions, I am also involved with a group of women called Sterling Features. Those are my two babies I try to run while I’m not on a TV set after 13 hours a day. That’s a little difficult to manage, but it’s fun.

Monica Raymund: Basically yes. I learn how to function on about 4 hours of sleep (laughs).