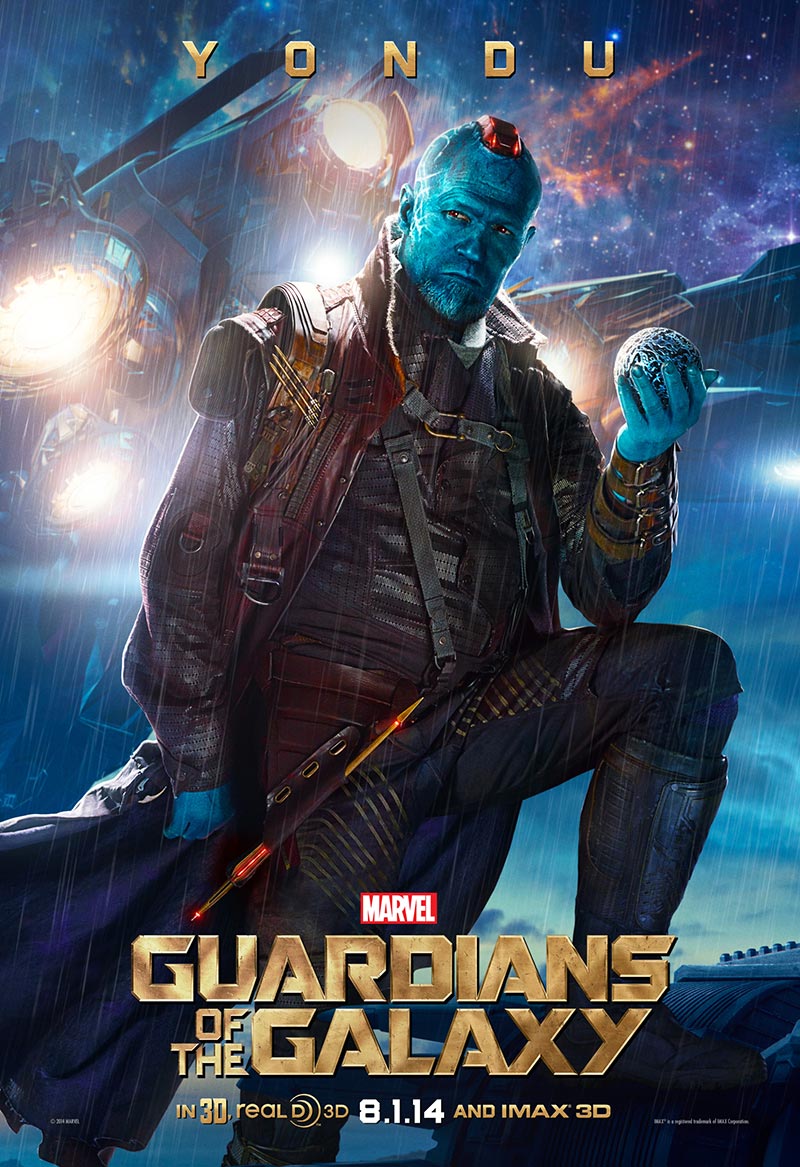 Michael Rooker was born in Jasper, Alabama. When he was thirteen, his parents divorced and he went with his mother to live in Chicago. Rooker caught the acting bug while attending college and began appearing in local stage productions.

On first breaking into film, the actor’s intensity and “don’t mess with me” good looks were highlighted to chilling effect as the title character in Henry: Portrait of a Serial Killer (1986). Since that widely noticed and highly praised performance, much of his career has been spent playing brutes, villains and psychopaths, but his occasional turns as a “good guy” are always well-acted and a welcome change for a talented actor too often typecast.

"There’s some Merle in Yondu, and obviously a little bit of Yondu in Merle, too. Mr. Gunn wrote the role for me, and he wrote in the combination of these characters. Yondu, myself and Merle sort of make up the full character of Yondu. Then you find things as you go along. You find interesting characteristics that you decide you want to show off a little more and some you want to cut back on."

Rooker was cast as Merle Dixon in AMC’s hit series The Walking Dead, a role that earned him a large and loyal fanbase all over the world, however, his character was killed off at the end of season three. The summer blockbuster Guardians of the Galaxy opened August 1, 2014, and opposite Chris Pratt, Zoe Saldana and Bradley Cooper, Rooker plays Yondu the highly skilled hunter and tracker.

Melissa Parker (Smashing Interviews Magazine): We spent a couple of hours in a small coffeehouse in Florence, Alabama, two years ago at a George Lindsey Film Festival.

Melissa Parker (Smashing Interviews Magazine): Ernie Borgnine was there, too.

Michael Rooker: Oh, look at what’s happened here. We’ve lost an amazing man. Life just keeps rolling along, you know. He was such an awesome guy. I love all those people down there, man. They’re so great.

Melissa Parker (Smashing Interviews Magazine): Are you tired of talking about Guardians of the Galaxy yet?

Michael Rooker: Oh no, I’m still coming up with stuff to say (laughs). Mr. Gunn asked me about everything. I had to agree about everything, you know? But it’s just an entertaining piece of work. I’m really very proud of it, and I’m proud of my buddy [James Gunn]. He wrote and directed it. All of the other actors just kicked ass. It was great.

Michael Rooker: That we surely did, yeah.

Melissa Parker (Smashing Interviews Magazine): Was Yondu a physical role for you?

Michael Rooker: I didn’t do a lot of major action stuff in this one. I like doing physical stuff, but this was easy enough for me. I really didn’t have many major fights. Yondu is just … you don’t want to mess with this cat. His weapon of choice is pretty powerful, so you don’t want to screw around with the guy. He’s a tough old boy.

Melissa Parker (Smashing Interviews Magazine): And a bulky guy, so extra workouts for you?

Michael Rooker: Yeah. I got even more stocky and looked very formidable. If you’re going to work out, you definitely need to utilize our food chain, too, either to bulk up with more muscle or actually gain more fat, whatever you want to do, whatever look you need to have.

Michael Rooker: (laughs) My whole family loved it. All of my friends like it. It has been getting awesome reviews and reviews from the fans themselves on the ground floor. I do signings at conventions, so the grassroots fanbase out there really dig it. They dig it a lot.

Michael Rooker: I read comics when I was a kid, and then when I found out I was going to be doing the role, I started reading more of the Guardians of the Galaxy series. I thought it was a great comic to bring to life on the big screen.

Michael Rooker: You know, what? A little of each, you know? There’s some Merle in Yondu, and obviously a little bit of Yondu in Merle, too. Mr. Gunn wrote the role for me, and he wrote in the combination of these characters. Yondu, myself and Merle sort of make up the full character of Yondu. Then you find things as you go along. You find interesting characteristics that you decide you want to show off a little more and some you want to cut back on.

Melissa Parker (Smashing Interviews Magazine): James Gunn is already speaking about a Guardians of the Galaxy2 slated for release in 2017, and he talks about finding out the identity of Peter Quill/Star-Lord’s father in the sequel.

Michael Rooker: Yeah. I’m not sure how the new script is going to really go. I know he has stated that he will flesh out a few characters like Yondu, and I think Nebula. There are a few characters he will be fleshing out, and I’m sure a few new ones that maybe you’ve never seen before. We saw a lot of alien races in this first one, and I’m sure we’re going to see more in the second one. It’s going to be cool. It’s going to be better than the first one.

Melissa Parker (Smashing Interviews Magazine): Cool. Is there any way that Merle can rise from the dead, or do you want him to?

Michael Rooker: (laughs) You know what? It’s a great role. What can I say? It was a great role. It was cut out a little too soon, in my opinion, but there’s nothing you can do about it. As the actor, you just do your thing and move on. But you know what? Everything’s up in the air, so who knows?

I don’t know how they’d do it. If somehow Merle Dixon was back on the show in some way, they’d have to do some sort of trequel or something. Hell if I know. I’m just the actor, They write it, and I’ll do it. We’ll see what happens. Wouldn’t that be thrilling though? That would be thrilling and a lot of fun. Fans would dig that.

Michael Rooker: (laughs) Wouldn’t that be nice! I wouldn’t mind that, pre-hand cutoff (laughs). If you thought he was a badass with only one hand, wait until you see him with two (laughs). Oh my gosh!

Melissa Parker (Smashing Interviews Magazine): Is Bolden! your next project?

Michael Rooker: Yes. I don’t know if they released it in the trades yet, but yeah. I’m on the set of Bolden! right now as we speak.

Michael Rooker: Oh yeah. We did this seven years ago. We did a lot of footage and stuff. We needed to get in and do some more work on it, but the actors were not available, so man, Dan Pritzker is off and running again. He’s written a script, and we’re gonna do it. It’s awesome.

Michael Rooker: I play a gentleman by the name of Pat. What’s my last name … let’s see, who am I? That’s funny, right? As an actor, here I am saying, who am I? Most people know exactly who they are.

Michael Rooker: Oh my God. I know. I know. It’s pretty wild. I don’t have my script with me.

Melissa Parker (Smashing Interviews Magazine): How does your character fit into the story?

Michael Rooker: As the script goes this time around, there are a few surprises for myself. It’s a little different. I don’t want to get too involved in answering your question because I don’t know if it’s gonna change or not change. I don’t want to say too much about that at this point because we’re really just starting.

Michael Rooker: Indeed, yeah. They’re still doing stuff about that. I don’t get to do much about it, but every now and then I shoot a finger at somebody (laughs). I’m also doing a big commercial for the Illinois Department of Transportation. That’s going to be pretty cool trying to get people’s attention to driving safety. The commercial’s going to be coming our pretty soon. I don’t get the chance to do commercials too often.

Melissa Parker (Smashing Interviews Magazine): When was the very first time you realized that you wanted to be an actor, Michael?

Michael Rooker: Oh gosh. I think I was about nineteen. I went to the theater school, the Goodman School of Drama in Chicago. I auditioned and got into this conservatory professional theater school. It’s a three-year conservatory program, and I got my training and went out into the wild world. That’s what I’ve been doing ever since. Couldn’t think of anything better to do.

Melissa Parker (Smashing Interviews Magazine): What kind of a grandfather are you?

Michael Rooker: It’s the easiest thing in the world. You just get to have another person to love, a sweet little baby. I have a granddaughter, and it’s very cool. When she starts crying and really wailing, you just give her back to mommy and daddy (laughs).