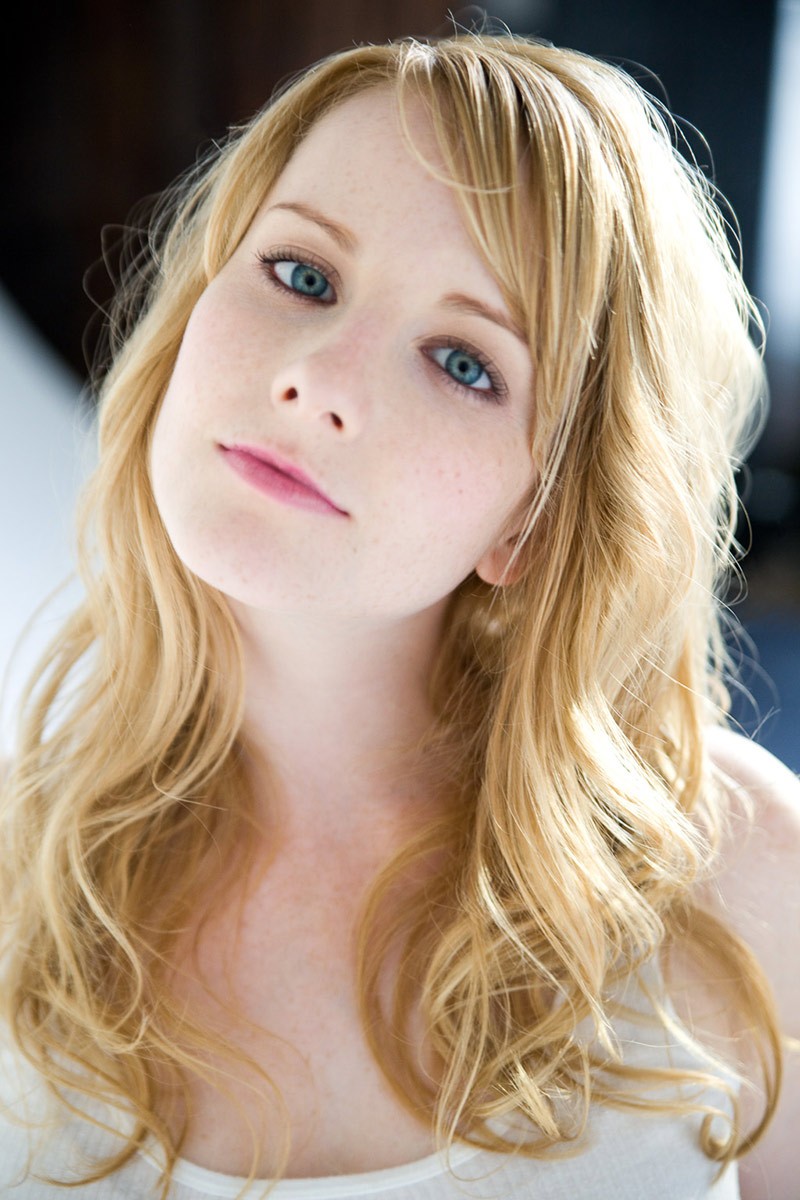 New Jersey native Melissa Rauch is best known for her role as Dr. Bernadette Rostenkowski-Wolowitz on the hit CBS sitcom The Big Bang Theory. Her character is married to Howard Wolowitz (Simon Helberg), and other cast members include Johnny Galecki, Jim Parsons, Kaley Cuoco, Kunal Nayyar and Mayim Bialik. The 10th season of The Big Bang Theory is set to premiere on September 19, 2016.

Other acting credits for Rauch include Kath & Kim, True Blood, The Office and the films I Love You Man and Are You Here. She co-wrote (with her husband) and stars in the sports comedy-drama The Bronze, about a foul-mouthed former Olympic medalist who is sidelined with a career-ending injury and is forced to return to her small Ohio hometown. The film also features Gary Cole, Thomas Middleditch and Cecily Strong and is available on Blu-ray DVD and Digital.

"I was at the unemployment office the week before I got the job. I was thrilled to just get the audition for a one-time guest star role on Big Bang, as I was a fan of the show. So, the fact that I am a regular part of the cast is something I am eternally grateful for."

Melissa Parker (Smashing Interviews Magazine): Melissa, what can you tell us about the upcoming 10th season of The Big Bang Theory?

Melissa Rauch: It’s going to be a great season! We have such phenomenal guest stars coming up. The talent joining is unreal. Judd Hirsch and Christine Baranski are returning as Leonard’s parents and Laurie Metcalfe as Sheldon’s mother. It was just announced that Katey Sagal will be playing Penny’s mother and Jack McBrayer will be playing her brother. We just returned to work the other day, so I don’t know much about what will unfold this season, but I can assure you that our writers are once again hitting it out of the park!

Melissa Parker (Smashing Interviews Magazine): Do you know how long into the new season Bernadette’s pregnancy will last?

Melissa Rauch: I’m not sure exactly how long they are planning on the pregnancy lasting. Bernadette is normally a bit of a boiling tea kettle, so I think the pregnancy adds a little more steam to her pot.

Melissa Parker (Smashing Interviews Magazine): Do you think the story of Howard and Bernadette having a child will drastically change the dynamics of the group?

Melissa Rauch: I really don’t. The writers have always done such a beautiful job protecting the group’s dynamics no matter what was thrown into the mix. Historically on Big Bang, any big changes just peeled back more layers to the characters while still maintaining the DNA of what this show is. The guys started out all single, and now three out of the four of them are in committed relationships, and that didn’t change what is at the core of this group, so I can confidently say that throwing a baby into the mix won’t change the dynamics either.

Melissa Parker (Smashing Interviews Magazine): Tell me about your audition for Bernadette.

Melissa Rauch: I was at the unemployment office the week before I got the job. I was thrilled to just get the audition for a one-time guest star role on Big Bang, as I was a fan of the show. So, the fact that I am a regular part of the cast is something I am eternally grateful for.

The character description just said something like, “Cute, sweet catholic scientist who goes on a date with Howard.” I knew she lived with her mother and that her mother dressed her, so I wanted to do something that made her more child-like, and I thought of raising the pitch of her voice a bit.

Melissa Parker (Smashing Interviews Magazine): Well, I think that definitely made the character! What have you enjoyed most about being on the show, and do you have a favorite episode?

Melissa Rauch: I love the TV family that I am so lucky to be a part of. It is such a wonderful group of people whom I adore being around. I have many favorite episodes, some of them were from before I was even on the show. I tend to gravitate toward the episodes where we are doing things as an ensemble – the scavenger hunt episode, the one where we went to a science conference together and everyone is fighting, and of course, the coitus episode last season.

Melissa Parker (Smashing Interviews Magazine): Why did you want to become an actor, Melissa?

Melissa Rauch: I was a super shy, awkward kid, and performing was a comfortable and joyful way of expressing myself that allowed me the freedom to do so. The passion for acting grew from there. From the time I was little, being on the stage or inhabiting a character was always where I was happiest.

Melissa Parker (Smashing Interviews Magazine): What was the inspiration for you and your husband to write the Olympic-themed film The Bronze?

Melissa Rauch: The original idea stemmed from us wanting to write about celebrity in a small town, particularly what happens when that star begins to fade and what that can do to the psyche, especially one of a young girl. It was also the exploration of what can happen when you are no longer able to do what you feel you were put on this earth to do. When that is ripped away from you, how does someone who doesn’t have the emotional tools to handle that move forward?

Melissa Parker (Smashing Interviews Magazine): How many re-writes and arguments between the two of you until the final product was completed?

Melissa Rauch: I can honestly say there were never arguments. We don’t argue over work because we have a “best idea wins” motto, and we both don’t have an ego about our writing. If the other person comes up with a better idea or joke, we are just happy to have something stronger to implement into the script. We did do a lot of drafts of the script though. We were doing re-writes even while we were shooting the film.

When you have 22 days and a shoestring budget to shoot a film as we did, you have to make adjustments to the script just based on not being able to afford certain things. So, we’d shoot a full day, and then re-write a scene for the next day since the location didn’t pan out and we needed to re-work it. It’s interesting because some of the things we changed, based on budget, ended up being some of my favorite scenes in the movie.

Melissa Parker (Smashing Interviews Magazine): Tell me about the film and about writing a graphic, but funny sex scene (laughs).

Melissa Rauch: The Bronze is the story of Hope Ann Greggory who won the Bronze medal in gymnastics on a torn Achilles 10 years ago and hasn’t done much with her life since. She’s living in her father’s basement and is bitter and angry that she can’t compete anymore and essentially stuck. It’s about her journey in this new phase of her life.

The bad language isn’t profanity for the sake of profanity. It is to highlight the fact that this person has been told for years to behave a certain way, eat a certain way and speak a certain way. Now that her passion has been ripped away from her due to an injury, she is rebelling against those old boundaries and her former self. As far as the sex scene, we wrote it in the script as “THE MOST EPIC CRAZY GYMNASTICS SEX SCENE EVER!” and I’m proud to say I think we delivered.

Melissa Parker (Smashing Interviews Magazine): That you did (laughs). Hope is certainly the opposite of Bernadette. Which character do you relate to more?

Melissa Rauch: I am really not like either of them, except that the three of us are short. What I realized is that Hope and Bernadette both have a lot of aggression, but they express it differently. Hope is tough on the outside, but there is a sweetness to her under layers and layers of anger. Whereas, Bernadette has this sweet candy coating, but her anger is right under the surface.

Melissa Rauch: My husband and I are usually writing when I’m not at Big Bang. We were writing partners before we got together as a couple, so that’s always been something we love doing together. I also enjoy cooking and traveling when I can get away, hanging out with my family and friends, yoga and guilty pleasures on TV.

Melissa Parker (Smashing Interviews Magazine): What else is coming up?

Melissa Rauch: We have another movie we are working on, and we’re writing a TV pilot for HBO – both of which we are really excited about!

Melissa Parker (Smashing Interviews Magazine): Can’t wait for the new season of The Big Bang Theory! Is there anything else you’d like to discuss?

Melissa Rauch: Hmm, I would like to discuss the Louisiana Purchase for no other reason other than I enjoy history, but I don’t think that’s what you meant. Other than that, I’m all good. Thank you so much for the interview!